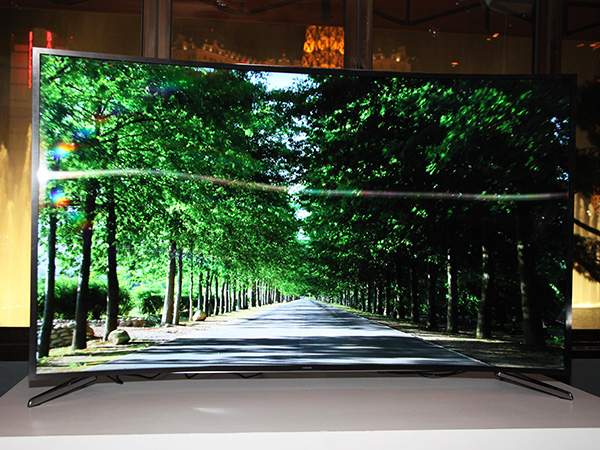 Just when curved-screen TVs began making its appearance in the consumer market, Samsung unveiled the world's first bendable TV prototype on the eve of CES 2014. Besides demonstrating their leadership in the area of curved displays, it was also to show how far they've progressed in the area of flexible screens since the first demonstration exactly a year ago. If you think the size is only slightly larger than the tiny Youm flexible display that was first revealed at CES last year, you'd be pleased to know that we're talking about a full fledge TV here that bends into the shape of a typical curved screen TV at the press of a remote.

Like most premium LCD TVs, Samsung's world first bendable 4K TV prototype measures a whopping 85 inches. The new so-called 2-in-1 TV will allow the user to select between the normal flat mode or curved display based on the user's preference. The degree of curvature can also be adjusted to allow for a more optimal experience based on the viewer's distance from the TV.

It is not known when Samsung intends to make these TVs commercially available, so it may be a while before you actually get to see these at your favorite retail stores. Till then, you can see how it works in the video footage below.