From PCI to AGP to PCI Express

From PCI to AGP to PCI Express

While all this was happening, there were also other major changes. One such change was the way graphics cards communicated with motherboards. Over the last 10 years, in order to satisfy our needs for greater bandwidth, we have transitioned through three major changes in the interface used - from PCI to AGP and finally, PCI Express.

As graphics cards got speedier, a quicker, more efficient link was needed to take full advantage of it and prevent the interface from being the bottleneck. As such, it came to a point, some time in 1997, when the humble PCI interface could no longer provide the bandwidth that was needed. To address this problem, Intel came up with the AGP (Accelerated Graphics Port) slot, which at its peak, could offer a bandwidth of up to 2GB/s. This was a dramatic improvement over that of PCI, which could only manage a maximum of 133MB/s. However, considering the rate at which graphics cards were evolving, it soon became evident that AGP wasn't future proof.

As a result, PCI Express was introduced by Intel in 2004. PCI-Express was markedly different from its predecessors in that it was structured around pairs of serial (1-bit), unidirectional point-to-point connections known as "lanes". In the first iteration of PCI Express (PCIe 1.1), each lane could send data at a rate of 250MB/s in each direction. The total bandwidth of a PCI Express slot was then determined by the number of lanes it has. A PCIe x1 slot would have a total bandwidth of 250MB/s, whereas a PCIe x16 slot (with the maximum lanes) would have a total bandwidth of 4GB/s. The PCIe x16 variant soon became the modern de facto interface for graphics cards.

However with ever faster graphics subsystems, it also meant that for PCI Express to be viable in the future, revisions would be needed and thankfully the PCI-SIG consortium has ensured that PCIe was designed with the future in mind and was extensible. In January last year, the second generation PCI Express 2.0 (PCIe 2.0), was born. The key advantage that PCIe 2.0 had over PCIe 1.1 was that data could now be sent at double the rate, meaning 500MB/s in each direction. This meant that an x16 slot could now transmit data at an amazing 8GB/s, four times greater than that of the fastest AGP iteration.

More recently, technologies such as CrossFire and SLI are taking advantage of PCI Express to give gamers that extra boost in performance. Thanks to PCI Express, multiple graphics cards riding on the same motherboard are now possible because being a point-to-point connection, it doesn't have to wait for the connection to free up nor require complex handshaking protocols. As such, multiple graphics cards can now communicate simultaneously among themselves and with the processor, which in turn results in much higher frame rates and a more immersive gaming experience. 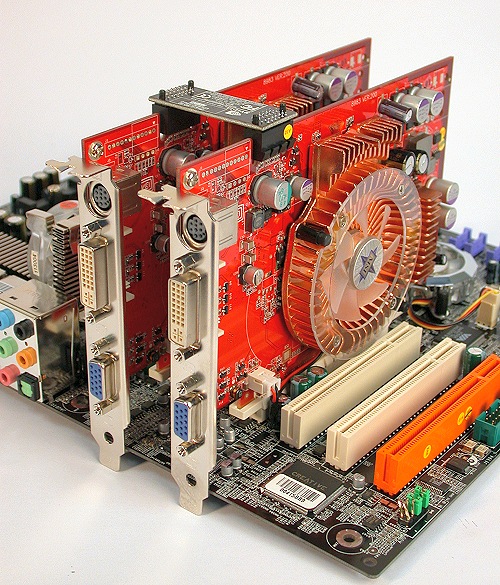