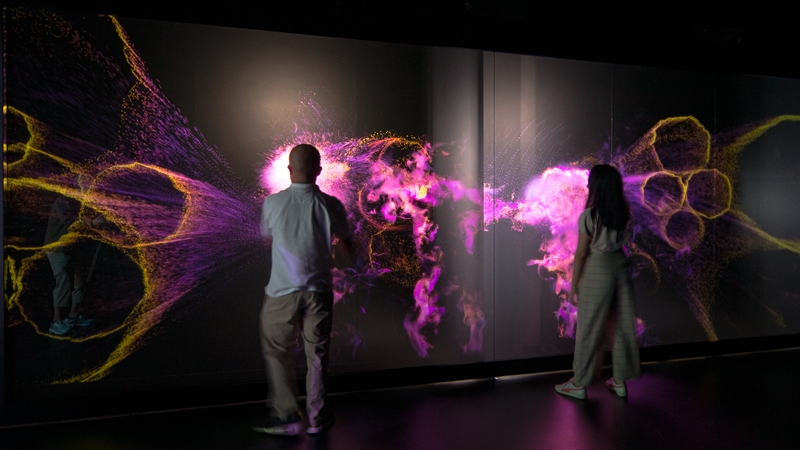 As gaming continues to expand beyond mere "playing" and into the realm of "experiences", it's interesting to take note of all the different avenues that open up along the way. Nowadays, many top-shelf games are already navigating towards letting gamers have shared experiences through features such as cross-platform play, global matchmaking, and of course, good old couch co-op.

So yes, interactivity is one of the big scaffolds that developers are starting to capitalise on, but it's far from the only one, and the latest exhibition to grace the ArtScience Museum's halls is all about exploring that impressive myriad of possibilities.

Co-curated by acclaimed game designer Tetsuya Miyaguchi in collaboration with the Barbican in London, Virtual Realms: Videogames Transformed is a co-production between the Melbourne Museum and the aforementioned ArtScience Museum. It's scheduled to open its doors to the public this Sunday, 12 June all the way till 9 January next year. Tickets will be offered at a discounted price for the Singapore leg of its global tour, with adult and concession tickets costing S$16 and S$12 respectively. For those with children, there is also the option of purchasing the family package for two adults and two kids at S$45.

At its core, Virtual Realms features six different exhibits, each of which is based on a theme that explores a different facet of the potential future of video gaming experiences. Naturally, experiences are best described firsthand, and we were lucky enough to attend a short tour of the exhibition on Thursday. Accordingly, now it's our turn to walk you through it, albeit briefly! 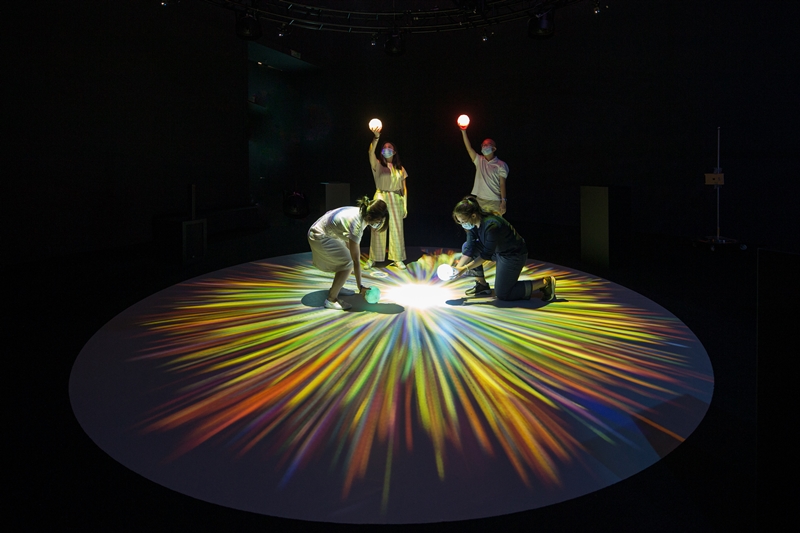 The first exhibit is called Rezonance and it's an interactive minigame of sorts based on the theme of SYNESTHESIA. The collaborative brainchild between Enhance and Rhizomatics, this activity has four participants, each holding onto a sphere interact with the shapes and colours that appear on the floor beneath them within the arena. As the different spheres clash with the digital constructs, they produce certain sounds and beats, and these can be combined to produce a unique symphony of sorts as the players move around the arena. It's certainly fun, and it can be quite a "trippy" experience too - it's hard not to be mesmerised by the movement of the bird-like constructs as they flit about beneath you. Just be careful not to bump into the other players!

Exhibit 2: Together: the distance between (us) 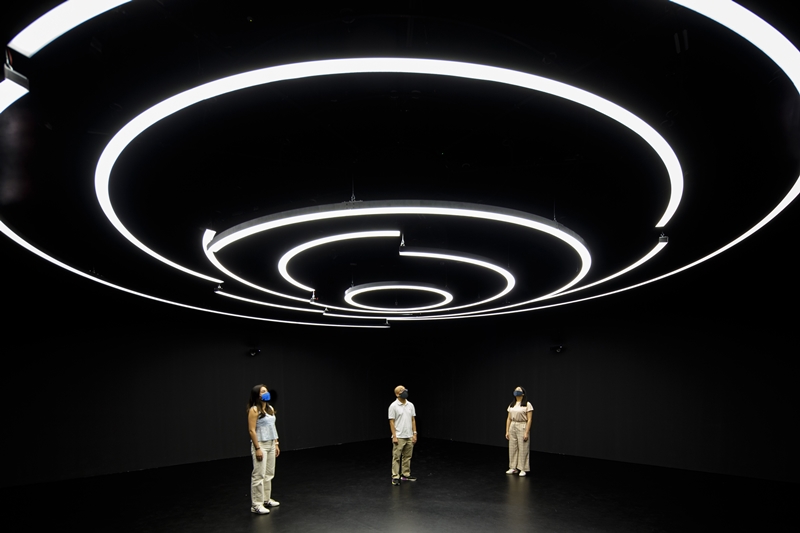 The second exhibit, which was created by thatgamecompany and FIELD.IO. is called Together: the distance between (us) and is modelled after the theme of UNITY. It appears rather simplistic at first; a bunch of concentric, circular sensors are laid out across the ceiling, and as the players walk around within the space, moving into and out of the different "tiers", these sensors light up and produce different sounds, all of which are taken from the game Sky: Children of the Light. Individually, this is certainly a little dull, but when everyone is gathered within the innermost circle, that's when the true beauty of this exhibit reveals itself, and we think it's best for you to discover what it is for yourself. Suffice to say that this was one of the exhibits that really struck a chord with us during the tour, on both a conceptual and to some extent, emotional level. 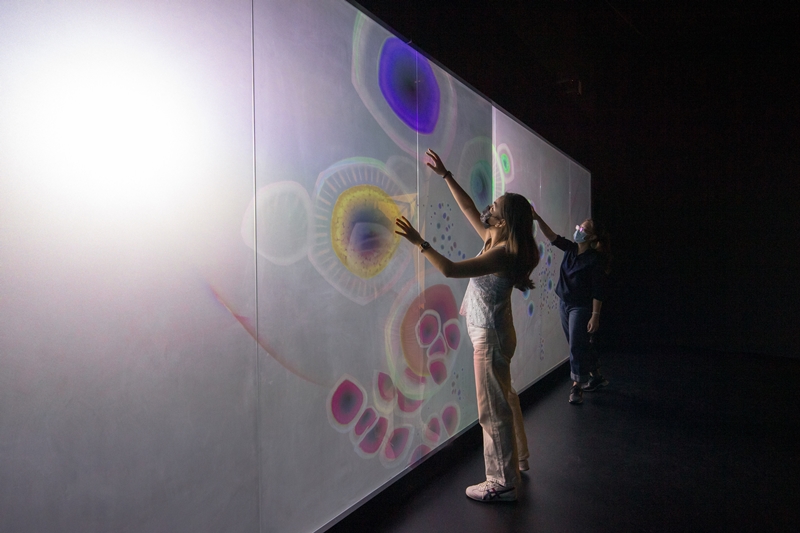 Moving on to the third exhibit, which embodies the theme of CONNECTION. This one is simply called WALL, and is created by KOJIMA PRODUCTIONS (yes, the one behind Death Stranding) in tandem with The Mill. Participants stand on two different and individually-themed sides of an opaque wall, which are designated as the "Molecular" and the "Galactic" aspects respectively. Apart from being able to interact with the digital constructs on the screen, players are also able to see silhouettes of the people standing on the other side, and are able to make "connections" by holding their hands over these silhouettes. It's honestly quite beautiful, and my buddy particularly liked this latter aspect of it. 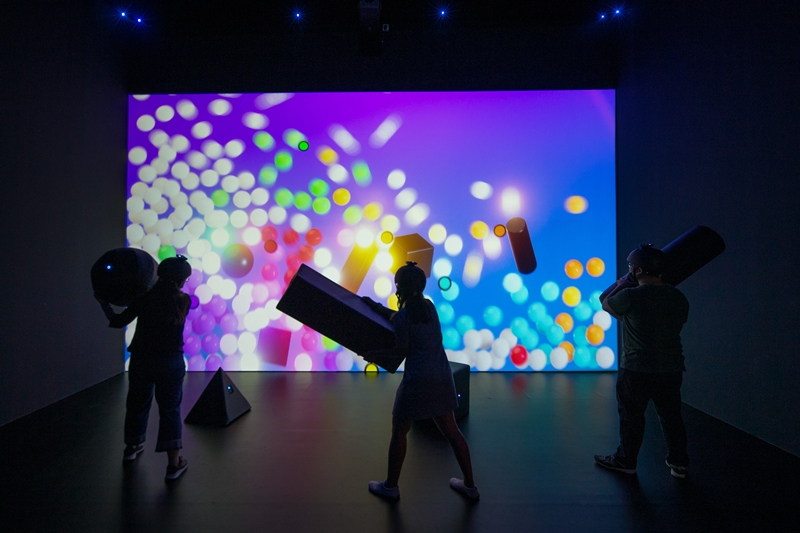 The fourth exhibit is titled Dream Shaping and is based on the theme of PLAY, which is pretty much the most foolproof theme out of the six. Designed by Media Molecule in tandem with Marshmallow Laser Feast, this activity has players putting on helmets with sensors and basically toying with several blocks within the room. These actions are then reflected onto digital constructs representing each of the blocks, and as you move through the different stages, which include a vibrantly-coloured ball pit and even a recreation of the universe, you can basically have fun and well, for lack of a better word, play. Don't do anything too goofy, however, as passers-by are able to look into the room via small windows at the side! 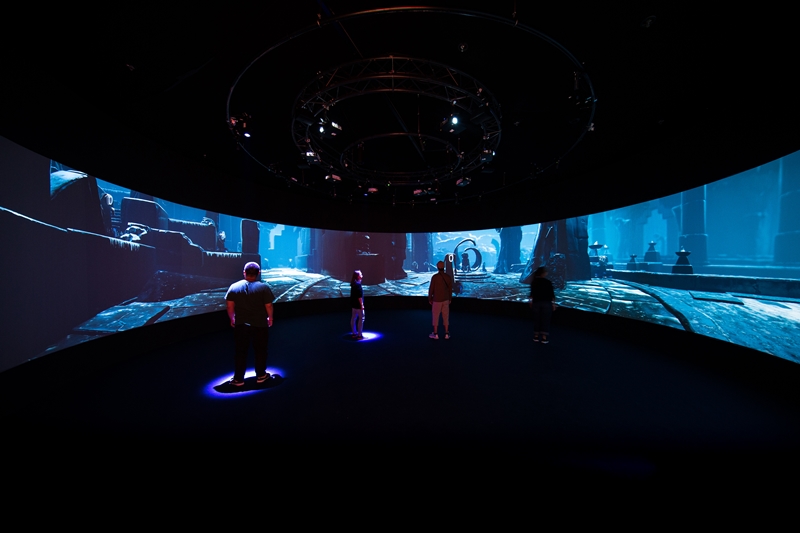 The fifth exhibit is titled Book of Sand and is centred around the theme of NARRATIVE. It was developed by Tequila Works and The Wonders, and presents a short story-cum-puzzle game that players can enjoy. To interact with the different parts of each level, players will step into and out of the spotlights that appear within this particularly dark room, and if they can find the correct sequence, they'll progress to the next level. This is arguably the most immersive of the six exhibits, as the screen covers pretty much your entire field of view, though the real beauty of this is that the interpretation of the narrative might differ from person to person. 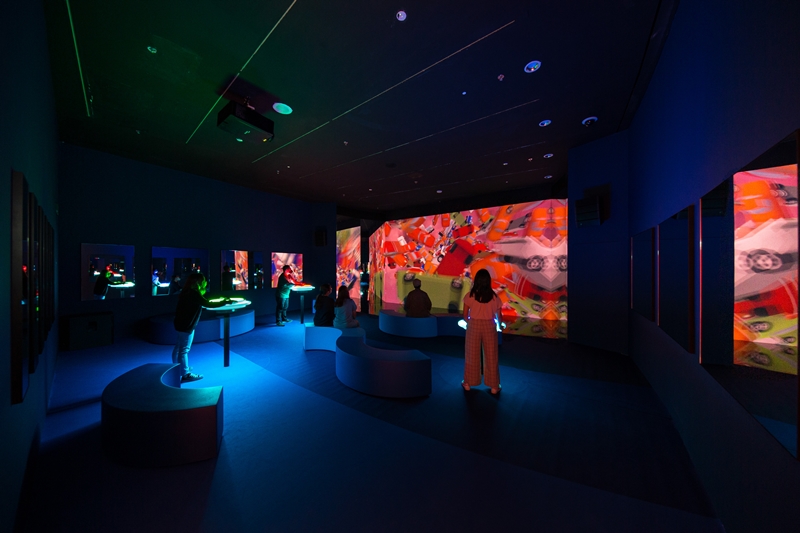 Finally, the sixth exhibit is titled Eye, and it's based on the theme of EVERYTHING. Created by game developer David OReilly and onedotzero, it's a pretty simple activity where three players take control of different "rotors" around the room. Accompanied by a medley of classical music from the likes of Chopin, Beethoven and many other celebrated musicians, you'll be taken through an endless voyage through space, and the rotors control the perspective, direction and zoom. Other players and spectators are welcome to relax on the benches and enjoy this surprisingly mesmerising trip, although we did certainly have fun spinning the rotors just for the sake of it too!

Needless to say, the whole tour was honestly pretty fun, even if we were spinning rotors for about five minutes straight. On a more serious note, we also couldn't help but realise an overarching idea of all six exhibits, and that was the fact that we "felt" these games more than we actually "played" them. All things considered, this is probably the one bit of the experience that words simply can't capture, so feel free to hop down and have a look for yourself - the little ones will probably have a ball too!