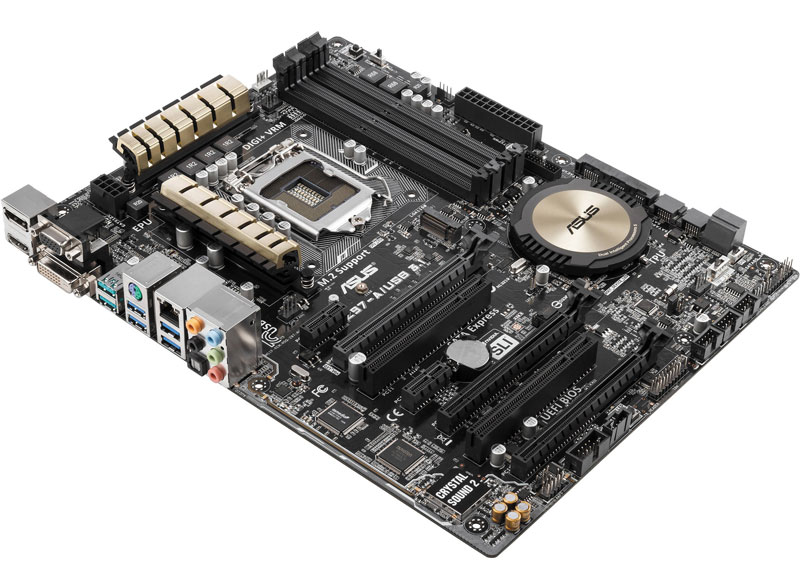 In early 2013, we heard murmurings of an update to USB 3.0 that would double data transfer rates while remaining fully backward compatible with existing USB connectors and cables. Later that same year, the USB 3.0 Promoter Group announced the completion of the new USB 3.1 specification with the following features:

With data transfer speeds of up to 5Gbps, USB 3.0’s SuperSpeed specification provided a significant speed boost over the 480Mbps on the older USB 2.0 standard. USB 3.1 has now managed to double this - its enhanced 10Gbps data transfer rates have been dubbed as SuperSpeed+, which translates into a theoretical peak rate of around 1.3GB/s as compared to 640MB/s for USB 3.0. Even though real-world numbers will probably fall short of these figures, we simply can’t wait to see wider adoption of the standard.

However, as with USB 3.0, mainstream adoption of USB 3.1 is likely to take quite some time and we’re likely to first see the standard make its way onto desktops first via add-on PCIe cards or third-party controllers before we start seeing wider implementation on mobile devices and drives. A case in point – ASUS has now moved to implement USB 3.1 functionality on its new motherboards, complete with add-on cards and support for existing Z97, X99 and B85 boards with updated BIOS. We’ll have a quick look at the major improvements in the USB 3.1 standard before diving into some performance figures for the new interface.

A detailed look at the USB 3.1 standard (SuperSpeed+)

The architecture of SuperSpeed+ USB’s communication layers is actually similar to that of USB 3.0’s SuperSpeed, but it features changes to the link layer, protocol layer, and physical layer for both the host and device. 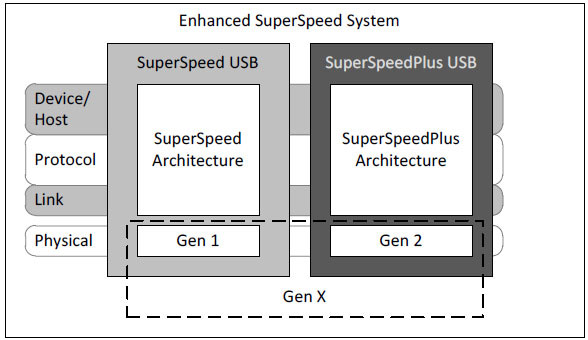 One of the more significant enhancements includes changes to the data encoding in the physical layer for USB 3.1 for more efficient data transfer and consequently higher throughputs. The physical layer consists of the PHY portion of a port and the physical connection between two ports. In order to signify the backward compatibility with USB 3.0, Gen X or Enhanced SuperSpeed system is used to designate a device/host combination that is capable of operating in both Gen 1 and Gen 2 mode.

USB 3.0 used what is called 8b/10b encoding (Gen 1), where transmitters in the physical layer scrambles and encodes 8-bit data into 10-bit symbols for transmission over the physical connection and a 5Gbps PHY signal. On the other hand, USB 3.1 switches to a more efficient 128b/132b scheme (Gen 2), where the new transmitter frames 128-bit data and control bytes by prepending a 4-bit header to differentiate between data and control. The move from 8b/10b to 128b/132b encoding thus reduces the bandwidth overhead from 20% to just 3% and improves data transmission efficiency from 80% to 97%.

In addition, because USB 3.1 was intended to not require any changes at the software level, it is compatible with existing USB 3.0 software stacks and device class protocols to facilitate use with existing host drivers. Many of the enhancements are thus found on the hardware level instead. For instance, USB 3.1 calls for new SuperSpeed Plus host controllers -- like the ASMedia ASM1142 controller on the ASUS boards – that will be able to utilize the additional bandwidth without requiring changes to existing host drivers.

But faster speeds aren’t all that are new with USB 3.1. The new standrad is also shepherding the adoption of the new USB Type-C port, a smaller, slimmer and reversible design that will fit into its corresponding female Type-C connector regardless of its orientation – great news for anyone who’s taken more than three tries to get their USB device plugged in. Incidentally, ASUS will be offering a single port USB Type-C card that can be purchased separately. Of course, USB Type-C is not backward compatible with existing Type-A USB ports, but passive adapters – such as this one from Apple – are available for newer Type-C plugs to interface with older USB 3.0/2.0 Type-A ports. However, users hoping to utilize the enhanced transfer rates of USB 3.1 will still need native USB 3.1 on both ends.

As mentioned before, ASUS’ USB 3.1 motherboard line-up includes both integrated USB 3.1 ports and PCIe expansion cards with the new connectors - boards designated as "/USB 3.1" will feature onboard USB 3.1 ports but those with the "/U3.1" suffix will come with an add-on PCIe 2.0 x2 card. Both solutions will be equipped with dual Type-A connectors - colored teal blue for easy identification - for better compatibility with a wider range of old and new systems.

ASUS has also supplied an external USB 3.1 Enclosure featuring two 250GB Samsung 840 EVO mSATA SSDs configured in RAID 0 for benchmarking purposes. The ASUS Enclosure sports a USB Type-C connector for data transfer and a microUSB port for power – both connectors need to be hooked up to the board in order for the drive to work.

On top of it all, ASUS has also introduced a new USB 3.1 Boost utility as part of its AI Suite 3 that features a Turbo mode primarily intended to improve performance on Windows 7. We’ll see how this all pans out as we explore our benchmark figures in the Results section.

We ran the tests on the following setup:

We had to make a couple of changes to the BIOS settings before running our tests. As per ASUS’ instructions, we disabled CPU C-States and Enhanced Intel SpeedStep Technology (EIST) before booting to Windows, after which we selected High Performance under Power Options.

Both CPU C-States and EIST serve to lower power consumption by optimizing the CPU operational frequency and voltage or allowing it to enter an idle state according to the demands placed on the CPU. But because the transfer of data is calculated through the CPU, this could affect the data transfer rate if transfer load ramps up while the CPU is idle. As a result, by changing the settings to ensure that the CPU is active at all times, we ensure that it is ready to handle data transfers at all times for the best performance. This also eliminates the resource overhead that results from the CPU constantly cycling between its idle and active states.

Of course, most users in real life enable these power saving features by default, so we've also penned down results observed when keeping BIOS settings as-is without tweaking it for the optimal scenario.