Nothing wants to launch a phone in the U.S to challenge the Apple iPhone
Shootouts

Small in size, not in sound 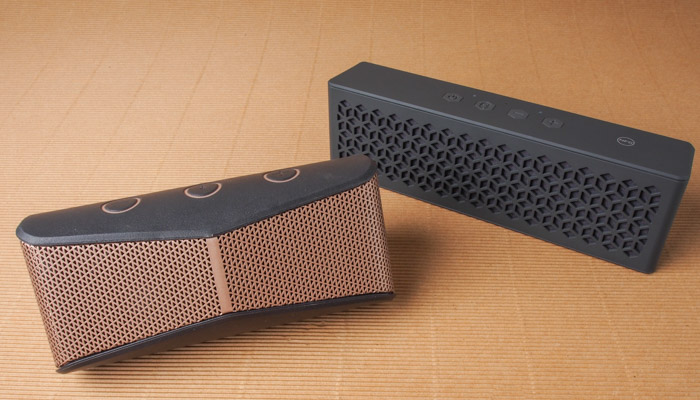 It almost goes without saying these days that most (or all) of your media library is stored on your smartphone, tablet or even in the cloud. As such, all you need is a good set of headphones for your listening (and viewing pleasure). A quick look around while you’re on the trains or in shopping centers will most likely confirm this, with at least three quarters of the crowd plugged in to their smart devices.

But what if you want to share your music with your group of friends at the beach or any other occasion? You certainly could split a pair of earphones, but (questions of hygiene aside) it’s easy to see how that’s not optimal. Certain headphone manufacturers like Beats build in a feature to let you daisy chain headphones, but that can get cumbersome at best. And how are you supposed to move? Enter the ultra portable speaker. Small and compact, these speakers certainly won’t deliver the audiophile experience given the sheer physical size constraints they have to deal with, but can certainly provide an upgrade to blasting music from your device at full volume.

The Creative Muvo Mini and the Logitech X300 are two of the latest ultra portable speakers to hit the market, and they offer the promise of quality audio for audio enthusiasts on the go. Both are fairly small and light - weighing 285g and 355g respectively, and measuring barely larger than a pencil case. The Muvo Mini is longer at 190 x 37 x 59mm while the X300 is more soft drink can sized at 152 x 71 x 69mm. Both support Bluetooth A2DP and have an audio jack for a wired connection, and come with rechargeable internal batteries which are charged via micro-USB. We'll take a closer look at how each speaker differs in the next few sections.

The Logitech X300 is a modern speaker that we first covered in a hands-on piece. As we mentioned, the X300 comes in three (two-toned) color options: red, blue and black. Featuring a plastic body that wraps around the main metal speaker grille, the X300 has only three buttons on the top of the speaker - two for volume control, and one for Bluetooth pairing.

Playback controls are left to what’s on your media player and the only other button on the speaker is the power button, discretely placed at the rear. A unique feature in terms of design is that the X300 is constructed to point upwards at a 30o angle, thus ensuring that the sound is directed to your ears instead of to your waist (when placed at tablet level). While there was an audible difference during our testing (when compared to conventional non-angled speakers), it was when we were standing up and moving around - as might be the case if you’re having a picnic outdoors or in a party setting - that we felt the difference most and appreciated the thoughtful angled audio output design.

Inside the X300, two passive radiators add bass while the mids and highs are produced by two drivers that are also angled outwards at 30o, ensuring that the soundstage created is wider and the sound produced more expansive. So that's a total of four speakers crammed within this little speaker. 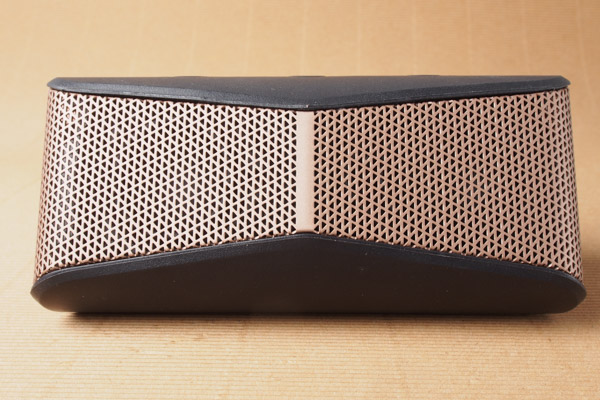 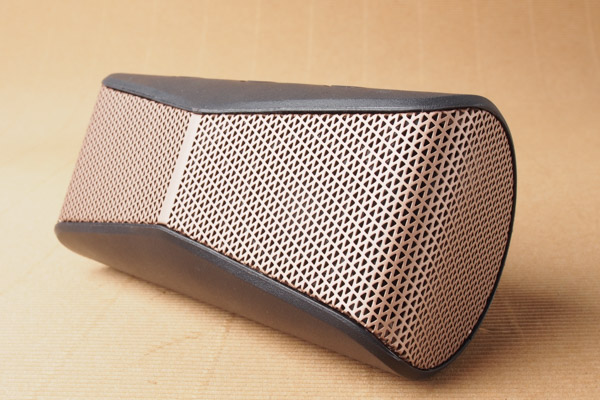 The side radiators (which are also angled outwards at 30o ) really did make a big difference in terms of the soundstage created though, and we thought this configuration gave the X300 a rather robust sound overall. No mean feat given the physical size of this speaker set!

Pairing via Bluetooth was a straight forward affair, and the volume actually syncs to your smart device so you can literally control everything from your phone once paired. We do wish the battery life was better than the five hours it’s rated at though - if we’re going to be planning a day out, we’d appreciate having something that goes closer to eight hours. But there is some consolation in that you can easily recharge it via the same portable external battery packs you use for charging your tablets and smartphones.

Thanks to the fact that the X300 includes side radiators and a somewhat angular design, you can actually stand your X300 on its side and use it in a vertical position. The only problem then is that you obviously only have sound from one side radiator and the two main front facing drivers instead of all four. We felt that this diminished the overall sound output though, so using it flat would probably be the way to go. 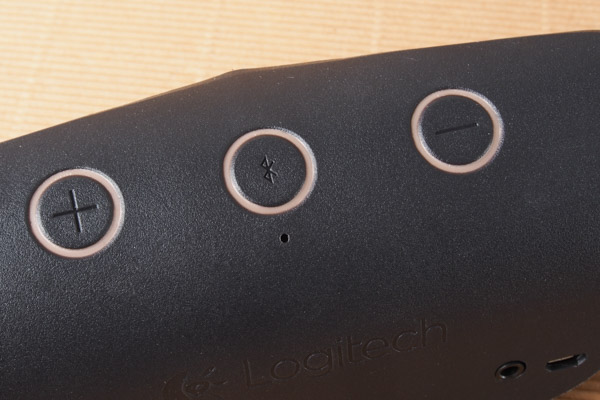 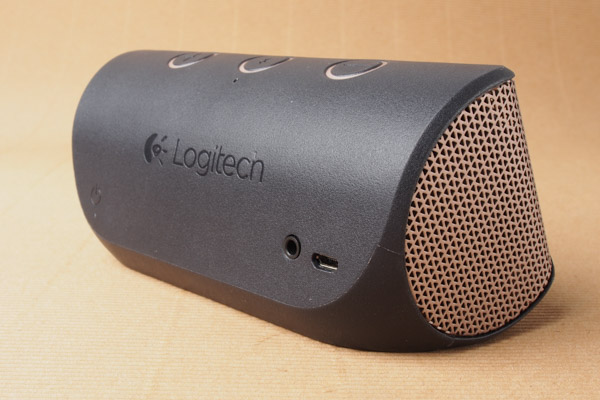 The latest in Creative’s MuVo line of NFC Bluetooth portable wireless speakers, the MuVo Mini is a slim minimalist speaker that’s basically shaped like a long bar fronted by a honeycomb design that acts as a speaker grille. Featuring an IP66 rating for protection against dust and water, the MuVo Mini seems purpose built for a day out by the beach or a poolside party.

Like the X300, the MuVo Mini has very minimal controls, with all four buttons on the top of the speaker. That’s also where you’ll find the NFC spot for pairing - on the top right - while the ports for your typical 3.5mm audio jack connection and USB charging are hidden away behind a rubber flap on the rear to keep it safe from water. While Creative is quick to remind us that the MuVo Mini is weatherproof and not waterproof (i.e. don’t dunk it in water and expect it to work), they do say that if it happens that water does soak through the grill entirely, simply shake out the water or dry it with a hairdryer at low heat and it should be back up and running in no time. 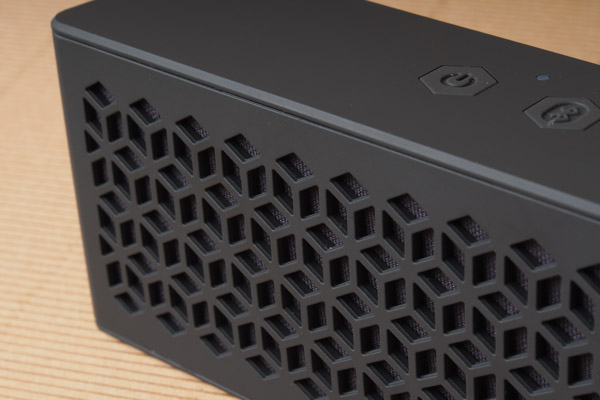 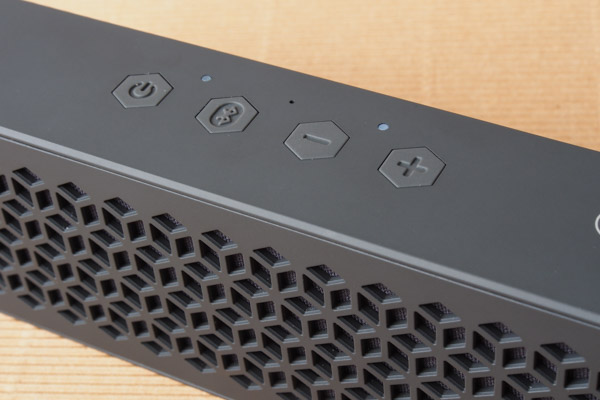 The MuVo Mini is slightly longer than the X300, but at just 285g, it's noticeably lighter. The internal battery is also rated to 10 hours (double that of the X300) so this is definitely a speaker that will take you through a full day of playback. Despite what Creative says though, the MuVo Mini isn’t something that will fit into your pocket - unless your pockets measure 19cm deep that is. It is however; definitely slim enough to put into a small bag and take it wherever you wish to go. This makes it an interesting proposition for overseas travel where weight is a definite concern.

Like the X300, the MuVo Mini will charge from external battery packs, so that's an easy way to keep your music going. However unlike the X300, volume on the MuVo Mini is independent of what is set on your media player, so we’d recommend setting the volume on your MuVo Mini to maximum, then use your phone for final control.

Because the speaker drivers are all facing forward, the sound doesn’t quite cover as wide an area as the X300, so you’ll want to place it right in front of you for best effect. That said, this is one speaker that can go uncomfortably loud so go ahead and blast your music - just take care of your ears by placing a bit of distance between you and the speakers before you start. 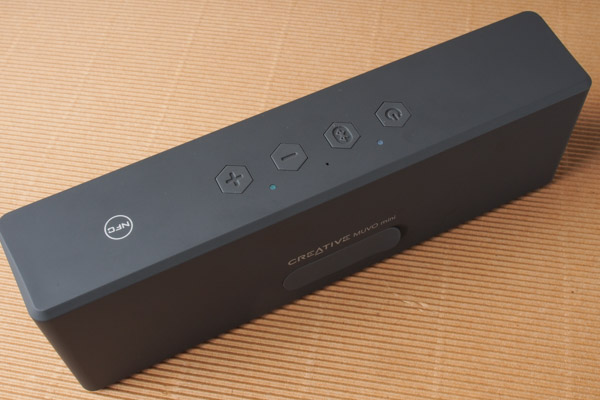 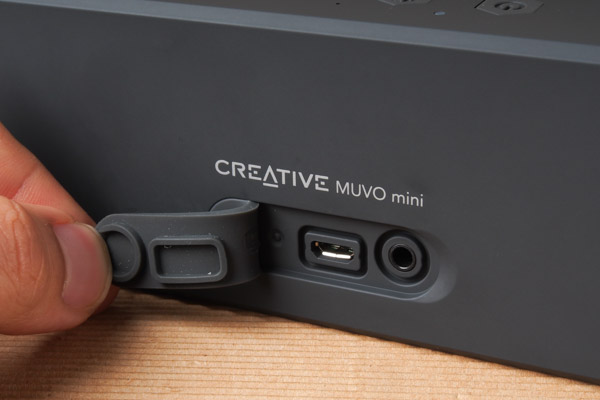