There are occasions where we come across something truly interesting, a product focused on the mass market in the hopes of reaching as many target groups as possible. What we're talking about is ULi's latest core logic chip, the M1695 HyperTransport PCI Express Tunnel Chip. Who's ULi? We don't blame you if the name draws a blank. ULi was formerly known as ALi (Acer Labs Incorporated), and ALi's last known chipset to have made any impact was the Aladdin V (Super 7) for the AMD K6 in the final days of the socket 7 architecture. ULi Electronics Inc. was formed as a subsidiary to ALi Corporation, taking over sales, marketing and more importantly, the R&D for their core logic chipsets. 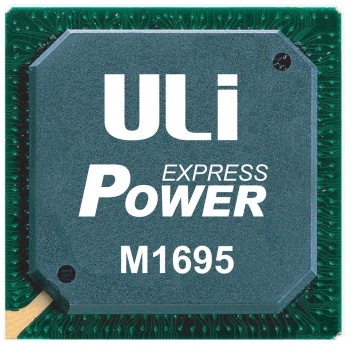 To be fair, ULi hasn't really been making vast inroads in the consumer market and their chipsets for both AMD and Intel platforms have been relatively unknown except for their Southbridge solutions that have been paired with third party chipsets. The most common ULi presence today would probably be felt in the mainstream M1689 single chip Athlon 64 chipset and the M1573 Southbridge used in many ATI Radeon Xpress 200 motherboards which are preferred over ATI's own feature starved Southbridges. Fast forward to today, ULi takes another shot at the AMD scene with the M1695, a much anticipated contender to NVIDIA's dominance, but can the M1695 hold a candle against the nForce4 heavyweight? Or is it just another case of 'paperware'?, impressive specifications with no bite. Well that's what we're here to find out and we invite you to take a look at this innovative solution from ULi.