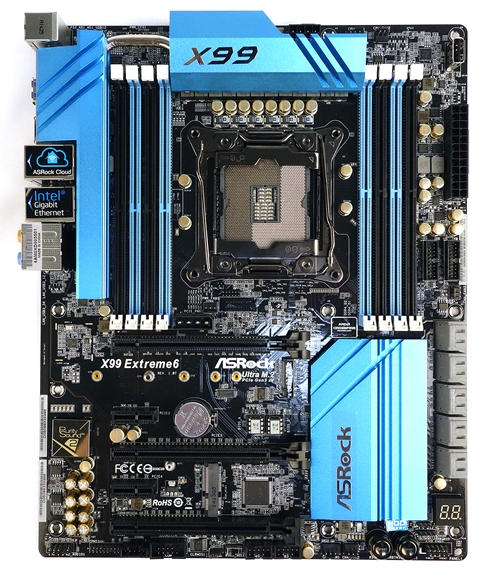 This Intel X99-based board from ASRock features a conservative blue-on-black color scheme; the same as the ASRock Z97 Anniversary motherboard. Unlike the 9-series board, the ASRock X99 Extreme is packed with a number of high-end features that will appeal to power users who need that extra "something". For a start, the board features premium 60A power chokes and premium memory alloy ones. The CPU is driven by a 12-phase, digital power system, which also boasts of Ultra Dual-N MOSFETs. 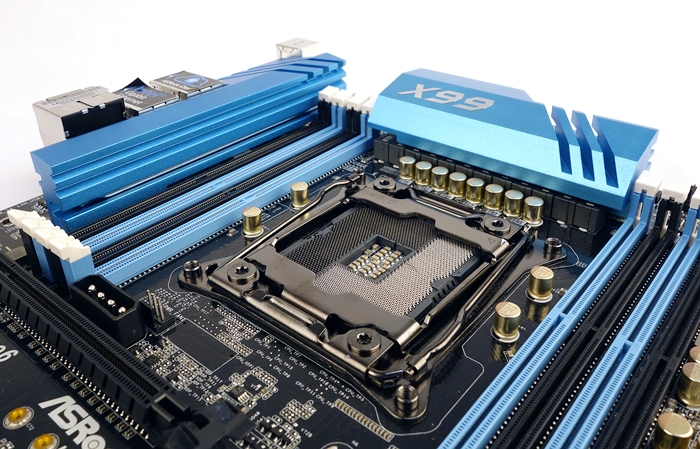 The MOSFETs are cooled by large aluminium alloy heatsinks, and from this angle, we can see the heatpipe that connects the MOSFET heatsink to the one near the rear I/O ports. 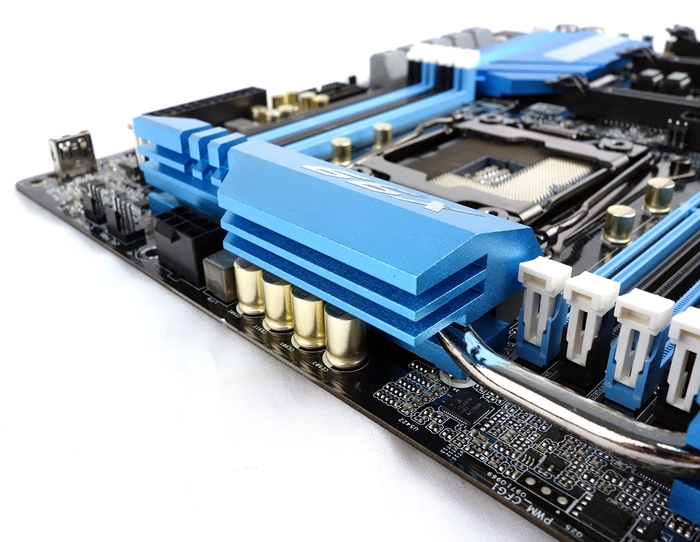 In spite of its muted appearance, the ASRock board punches above its weight category, beating the seemingly more ASUS X99-Deluxe by supporting up to 128GB of quad-channel DDR4 DRAM. In addition, the ASRock X99 Extreme6 supports DDR4 DRAM modules with ECC. Therefore, it will definitely appeal to rig builders who want set up workstation for enterprise-level compute requirements. In comparison, the ASUS X99-Deluxe only supports non-ECC DDR4 DRAM modules, up to a maximum capacity of 64GB. 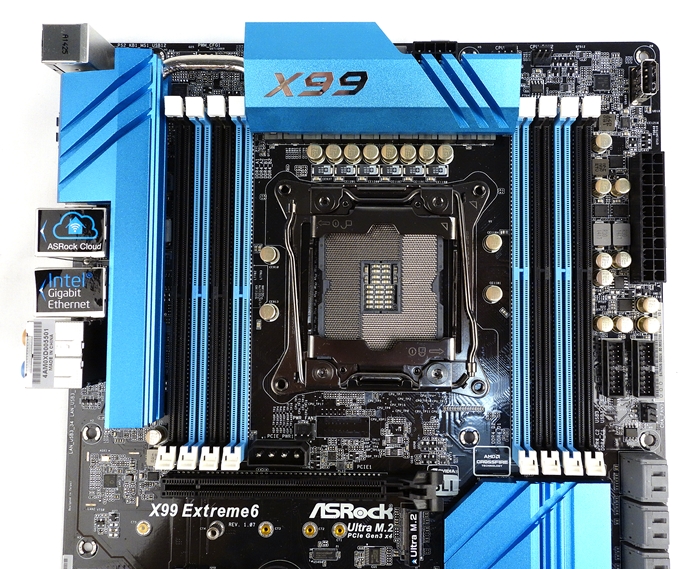 Moving south from its LGA-2011v3 CPU socke, we see a 4-pin Molex power connector that is only required when three discrete graphics cards are installed. The three x16 PEG slots operate at x16, x16, x8 modes respectively when a 40-lane processor is installed. With a 28-lane chip, the slots operate at x16, x8, and x4 modes. The last x16 PEG slot shares PCIe lanes with the Ultra M.2 socket; and the slot will be disable when a M.2 PCIe Gen 3.0 storage device is installed. 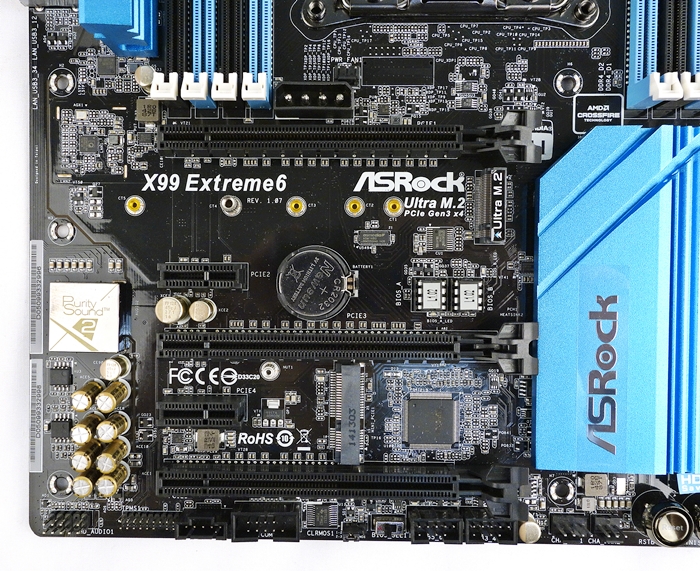 The Ultra M.2 socket first made its appearance in the company's Intel 9-series lineup, and it offers the option of using either a M.2 SATA 6Gbps or M.2 PCIe 3.0 flash storage device. However, its presence means the sacrifice of a expansion slot (or two) on the board. 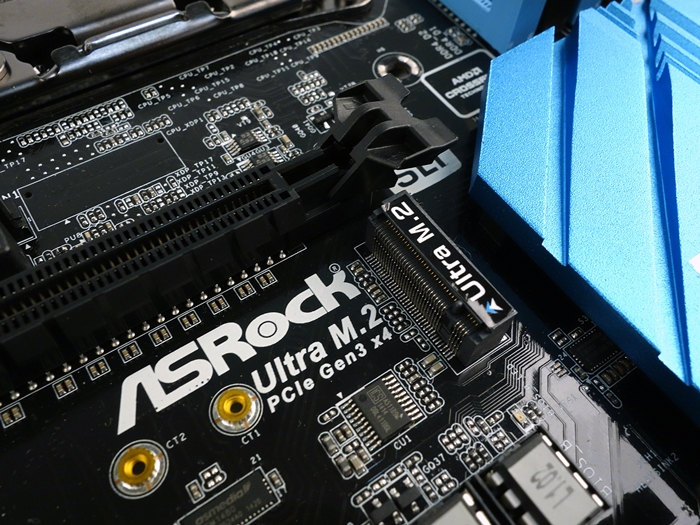 The bottom edge of the board is crammed with headers and connectors; in addition, we see a switch that toggles between two sets of BIOSes. The onboard power and reset buttons are useful in an open work bench environment. The board also boasts of the Purity 2 audio system, which is pretty similar to the initial introduction of the Purity audio system that we've covered in more detail, but the second revision uses higher quality capacitors (as reported in our preview of an earlier board). 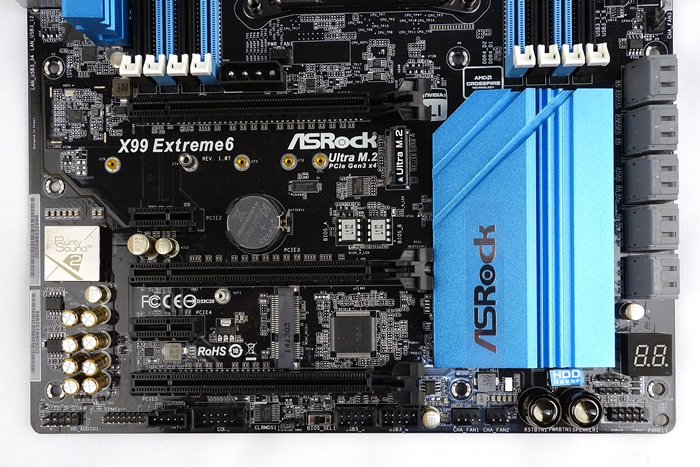 There are a total of eight SATA 6Gbps connectors; however, SATA Express ones are absent.

The rear I/O ports feature a rarely seen (these days) eSATA connector. There's also a PS/2 combo port that sits below a pair of USB 2.0 ports, a collection of USB 3.0 ports, and the usual audio connectors. The Gigabit LAN ports are driven by the Qualcomm Atheros AR8171 and Intel I218V chipsets respectively and is a nice addition to the board's feature set. Dual LAN ports aren't the norm these days when wireless connectivity is better preferred for most consumers who would prefer to cut a cord where possible.

The ASRock X99 Extreme comes without the bells and whistles of the ASUS X99-Extreme; however, it's clearly meant for workstation compute requirements. Read on to uncover its performance in comparison with the ASUS board.