Another set of true wireless earbuds that are advertised for sports usage is the S$299 Sony WF-SP700N. It has a much smaller form factor than the Plantronics BackBeat Fit 3100 with just a silicon support fitting to ensure you can get a good fit. It’s rated at IPX4 so it will also handle sweat and water splashes fine, just not a sustained stream of it.

The WF-SP700N also comes with a companion app for iOS and Android, and that allows you to adjust EQ as well as the noise-canceling features of the earbuds. Sony has what they call Ambient Sound Mode, which tones down the amount of noise-canceling applied so you can still hear what your workout buddy is saying without straining, or just be more aware of your environment.

Unlike the other two sets of earbuds in this shootout, the WF-SP700N uses Bluetooth 4.2 for connection. We were a little surprised that it didn’t support Sony’s LDAC technology though as you’d think true wireless earbuds, in particular, would benefit from the increased transmission speeds of LDAC. 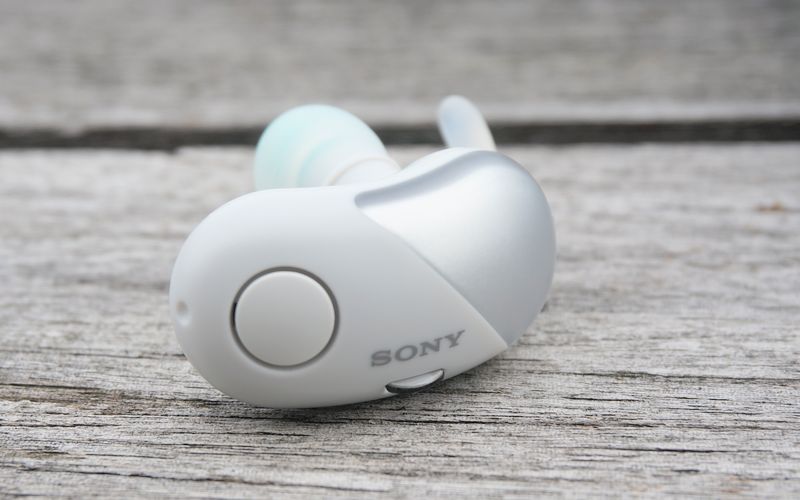 Like the BackBeat Fit 3100, we experienced several dropouts from the WF-SP700N during our testing. In this case, though it was more of the right earbud dropping out than losing connection to both simultaneously, so it proved quicker to resolve. It seems the left earbud is the master for the WF-SP700N, as even during pairing you’re instructed to pair that first before taking the right earbud out from the case.

The WF-SP700N has the lowest battery life of all the earbuds in this shootout, with just three hours on a full charge. Despite not being much smaller than the competition, the carry case only holds another two charges, bringing the total playtime you can get on the road to nine hours. Respectable, but quite a bit less than the RHA TrueConnect’s 25 hours.

While the WF-SP700N has a mode to let noise for environmental awareness, we feel you get the best sound with ANC activated. The connection was an issue here too, as we found that the right earbud tended to drop off quite a bit, sometimes just from a turn of the head.

That aside, the WF-SP700N is capable of turning in energetic performances with pretty good separation. For example, on a recording of Bruno Mars’ 24K Magic, the earbuds turned in a lively rendition of the piece with good separation in the vocals between Mars and his backup singers.

Shifting gears to Rebecca Pidgeon’s Spanish Harlem showed that the lower ranges are a little lacking though. While not as weak as the BackBeat Fit 3100, the earbuds struggled to deliver the opening bass beat, leaving you straining to listen for what should lead you in to the track. Likewise, the Sony earbuds are probably not the best choice for heavy rock pieces either as you’ll find yourself missing the drums and bass sections.

Where the earbuds do well is with instrumental pieces as they convincing deliver naturalness. With a recording like The Eagles’ Hotel California, this works well as the emphasis is on the guitar work and the various percussion instruments in the background.