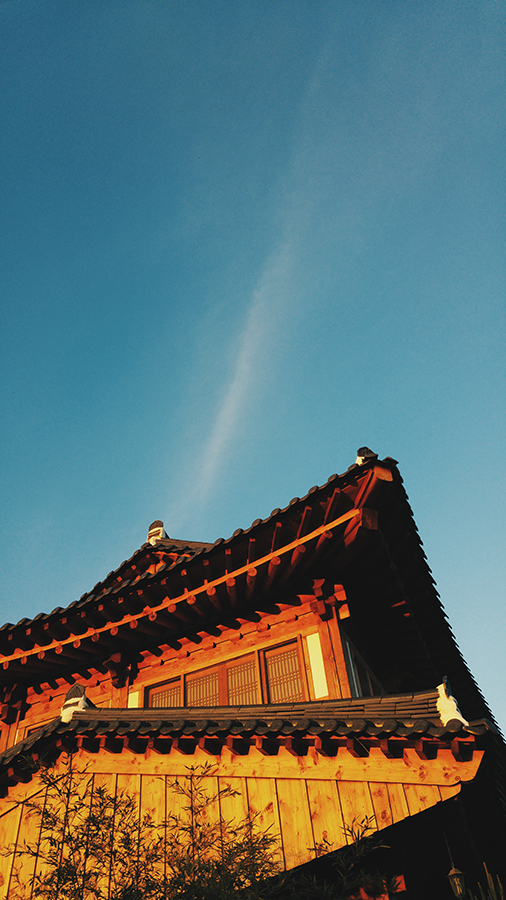 I photographed this hanok not long after the earlier shot. Again, we see how the golden light transforms an ordinary scene; the warm light has intensified the already warm colours of the hanok, creating a strong contrast against the blue sky. By luck, a single line of cloud provided a strong leading line, it draws your eye through the frame into the hanok.

We’ve been talking about what’s inside the frame, but now let’s talk about the frame itself. Specifically, about the frame’s aspect ratio, or how long and short the dimensions of the image are. The G4 let me set three aspect ratios: 16:9, 4:3 and 1:1. Now, to me, there are no ‘right’ or ‘wrong’ aspect ratios, if you use them intentionally.

For example, a 16:9 aspect ratio is a wider, more cinematic look, which might make it more suitable for wide landscapes. If you want to shoot a portrait, 16:9 might be too long, so you might switch to a more proportionate 4:3. A 1:1 aspect ratio might work better for details, because it excludes so much from the frame. Your choice of frame depends on and affects what’s inside the frame, and it's another way to affect the overall impact of your photo.

Here’s same photo cropped into different aspect ratios. Does it change the way you feel about the shot? How? Why? 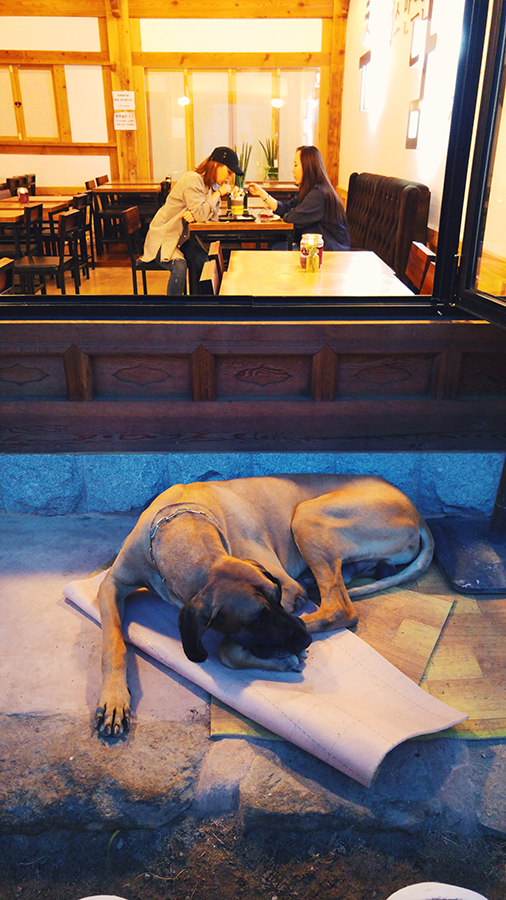 I got this shot because I’d missed it earlier. I’d passed by this restaurant, which kept a giant dog in the lawn. The dog had gone up to a customer seated by the window, and gave her a quick sniff. She turned around and made eye contact with the dog, which made a perfect moment — that I missed completely (12).

I waited a while to see if the moment would come again, but the dog laid down and seemed content to just chill (13), so I walked away and got my shots of the earlier hanok. The situation was so unique though, that I kept it in my head. Unusual situations hold potential for interesting photographs, and this one was different enough that I now made my way back, approaching the restaurant with the G4 out. 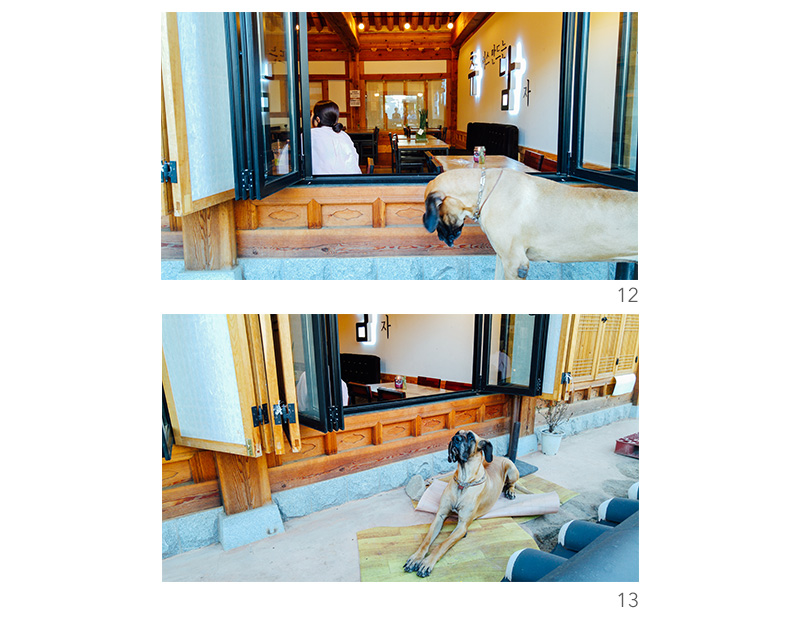 I walked by, saw this perfect scene, and took the shot. It’s difficult to tell a story in a single photo, but one way to do it is by using contrasts, and I like this picture because it has two.

The first is the conceptual contrast: there are two people inside, enjoying their food, there is one dog outside, looking sad without any food. The second is the colour contrast; the warm yellows in the interior contrast the cool blues of the exterior, emphasising the difference between inside and outside. 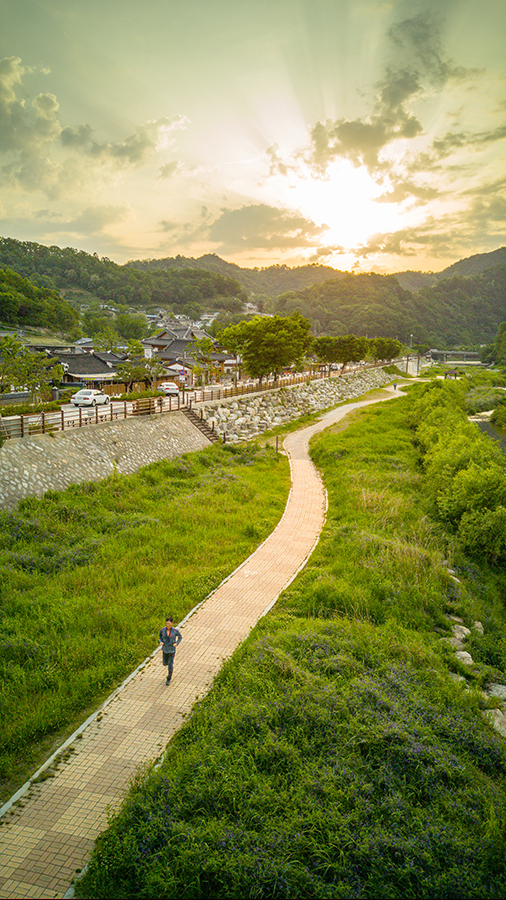 On my second-last morning in South Korea, I walked to the Jeonju River and was greeted by this magnificent sunrise. For me, this is a photo about leading lines, I love how the long line of the path leads right to the magnificent burst of sun at the end. The jogger adds a focal point to the image, without him the frame looks empty.

Now, how do you feel about the jogger running out of the frame, towards you, instead of running into the frame, away from you? What do you think one says compared to the other? To me, this image is a story about a person coming from the light, his journey coming to an end at the edge of the frame. I actually would have preferred it if he was running into the frame instead, which signals that his journey to the light is just starting.

I processed this frame in Adobe Lightroom on the desktop instead of on the G4, because it’s a raw file. Shooting sunrises and sunsets can be tricky, because they create high contrasts between light and dark areas, and it’s easy to lose shadows as well as highlights.

Knowing that, I used Manual mode on the G4 to save this series in raw, so I could get at least a couple more stops to work with in post compared to JPEG. The G4 saves the raw file in the open DNG format, so I could read it immediately in Lightroom that evening. I shoot in raw when I use a digital camera because it saves so much more information, and it amazed me that I could now do the same with a smartphone.

Here’s another shot to show you how much flexibility you can get in a raw file, here I exposed for the intense highlights (14) and later recovered the shadows in Lightroom (15). The G4 makes it easy to control exposure in Manual mode with the exposure compensation tool, a setting DSLR users will be familiar with. 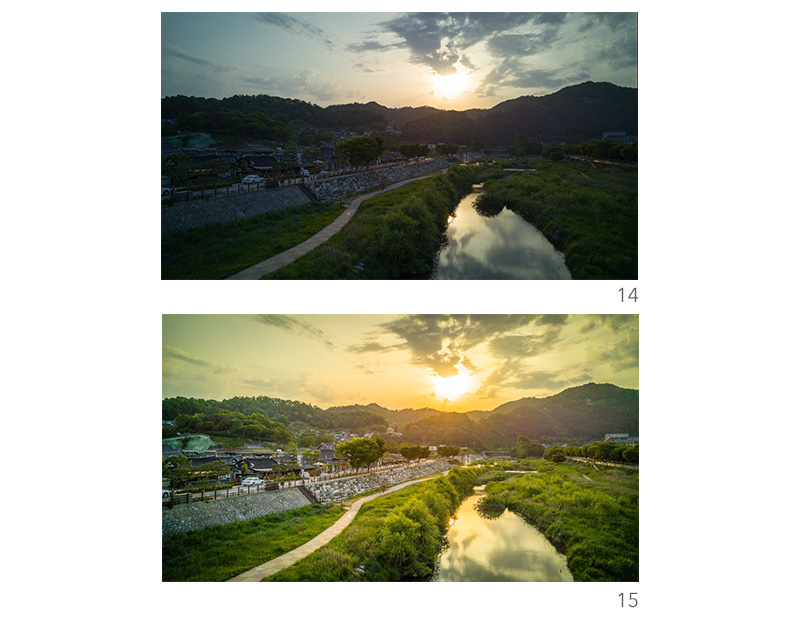 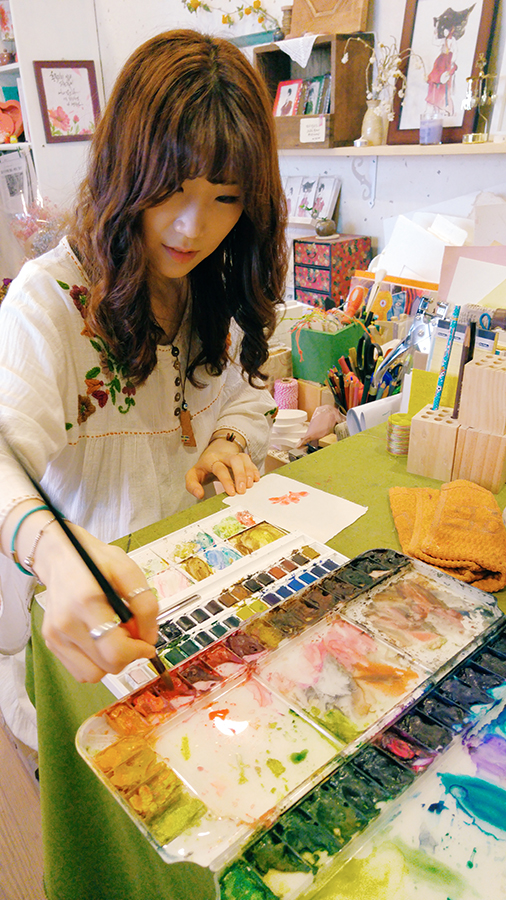 It doesn’t feel like I made this photo, instead it feels like this photo was given to me as a gift. Jang Mi Youn makes elegant paintings of Korean women in traditional hanbok (Korean dress). When I walked into her shop in a Jeonju alleyway, my eyes were drawn to her colourful and textured work desk, which I knew would make a great photo.

I explained myself to her and asked if I could take some photos. She agreed and I shot her desk, but it was a great background without a great subject (16). I asked if she could sit at her desk, and she not only graciously sat, but started to paint as I made her portraits, and gave me the painting as a parting gift.

Again and again, I was surprised by how many people opened up their workshops and selves to me and my camera, simply because I asked. Without their permission, these photographs couldn’t have been made, and I’m grateful to them for it. 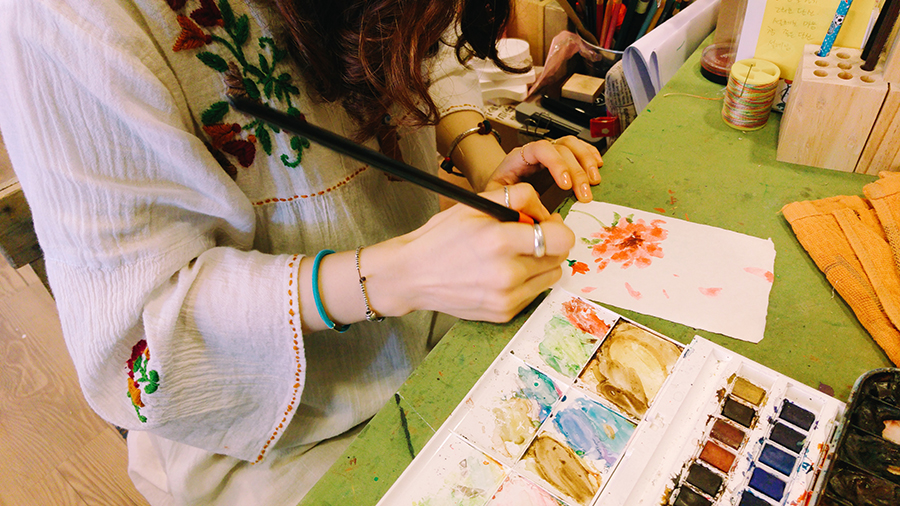 When I look at the pictures I took in Korea versus the ones I took in Japan, the one difference that strikes me is how much closer to people I am in Korea. I think there are three reasons for this; the first is that the G4’s single focal length forced me to actually get closer to people to make their portraits. Secondly, it felt like people were less intimidated by me getting closer with a small smartphone, compared with a big DSLR camera obscuring my face.

The third reason is something I consciously forced myself to do, and it’s a quote I first heard from photographer Steve Simon:

I find that I normally start too far from the subject, and I don’t even realise it. It reminds me of what Robert Capa said; “If your photographs aren’t good enough, you’re not close enough.” By going closer, I find that my photographs almost always get stronger. 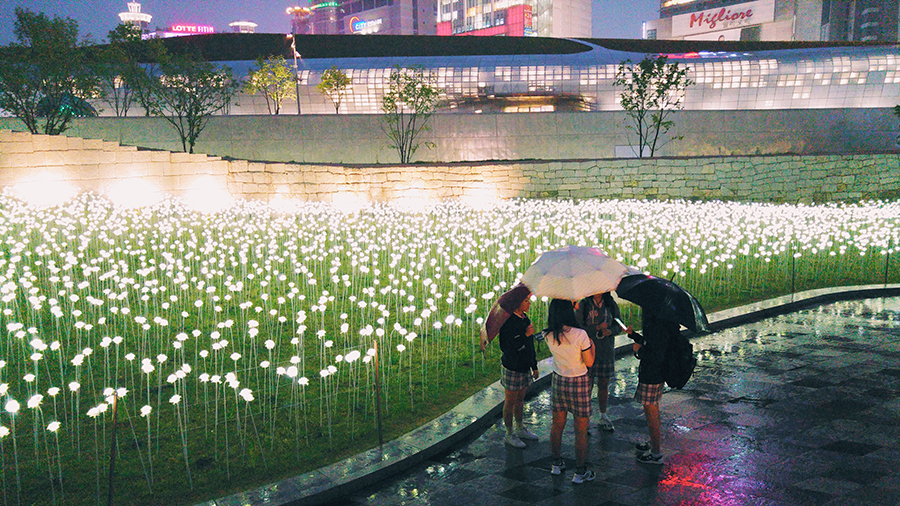 This is one of my favourite images, and I took this earlier in Seoul, on a rainy evening. You’re looking at the Dongdaemun Design Plaza in the background, a building for design-focused shows and conferences. The points of light flooding the mid-ground are manmade white roses, each lit from within their buds.

The problem is that the scene looked nothing like this when I got there in the afternoon. The light was drab, and nothing was happening. I made a few sketch images, looking for angles (17, 18), and thought there might be a potentially great background here…later. A quick check with the information counter revealed that the roses would be turned on in the evening, so I went for an early dinner. 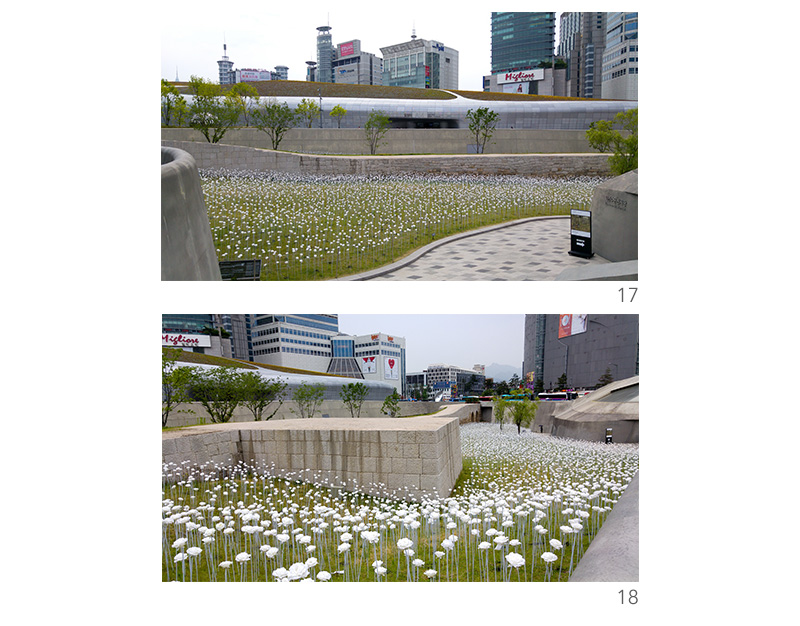 When I walked out later, it was drizzling. I enjoy shooting in the rain, the water on the ground adds depth through reflections, and people with umbrellas sometimes make colourful shapes. Luckily I'd packed an umbrella.

I went back to the place I’d scouted earlier, and made this shot of a couple. Nice background, but their silhouettes were too tangled up together to read clearly (19). One of the best pieces of advice I’d ever gotten as a photographer is that if you find a great background with great light, then wait around for a great subject to appear, so I did. 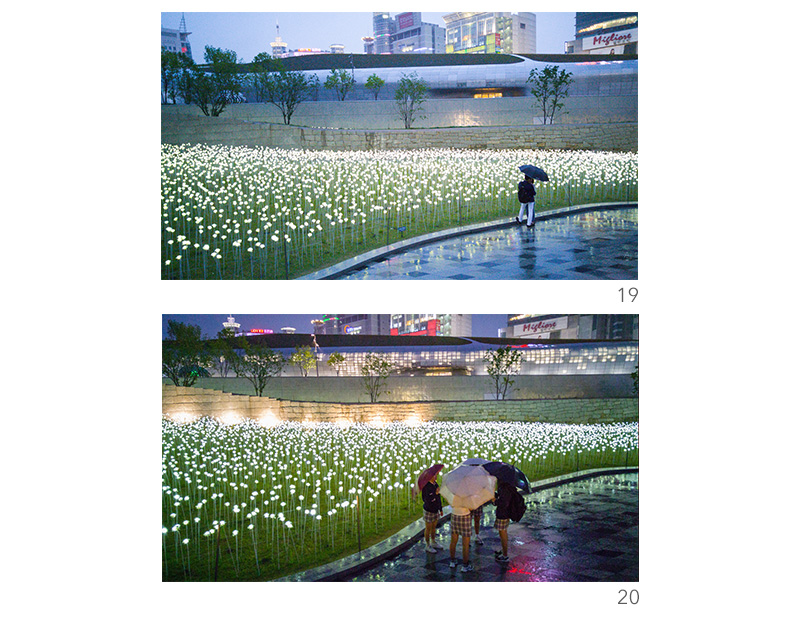 After a few people came and went, this group of schoolgirls came to take pictures. One of them started talking excitedly, and they rushed into a circle — right where my focal point was. The shape of their umbrellas clustered together into an interesting shape (20), but it was when one of them raised her umbrella, creating variety and contrast, that I knew I had my shot.

To be honest, I’m surprised this image is even sharp, I was clinging onto my umbrella with one hand, trying to keep dry, while trying to frame the moment at the same time. The EXIF data says this was shot at 1/17th of a second, which is a pretty low shutter speed, so it was most likely the G4’s optical image stabilisation that kept this shot steady.

What is travel photography?

Travel photographs are the photographs you make from the airplane window, of the delicious local food you had, and the group shots in front of the famous attraction. I have lots of photos like that too, from my week in Korea, of places and details that I want to remember. 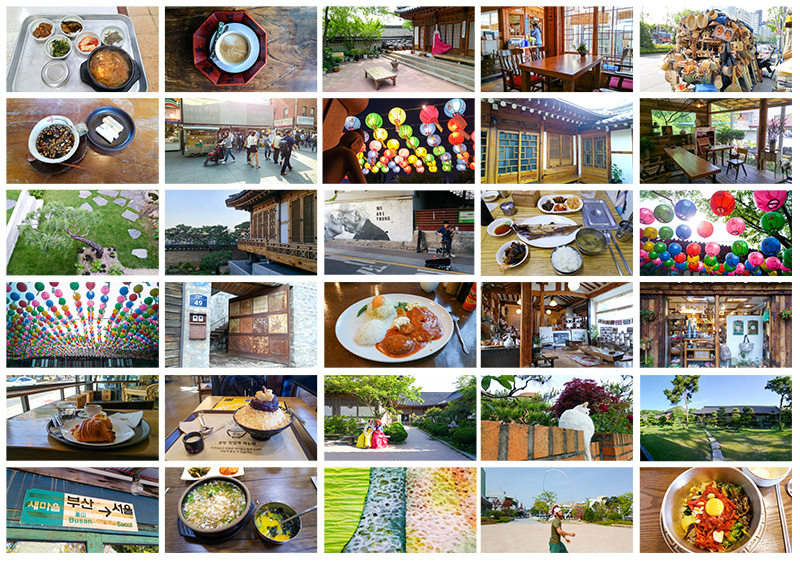 Then there are the other travel photographs. The ones which combine great light, subjects and backgrounds into photographs that show how you felt about a place, not just what you saw there.

If there’s one thing that I learned in these seven days, it’s that getting something good may be hard, but if you keep shooting, you’ll eventually get something you love. Facing dozens of bad photographs, I kept walking, kept shooting, and eventually created a body of work I feel confident about. That I could do it with a smartphone was remarkable, but not revolutionary, considering how much better their cameras are getting these days.

With a little more effort - waking up a little earlier, waiting a little longer, asking a little more, trying more angles, capturing a few more moments - you have a chance at getting a travel photograph you’ll love that extra bit more. And I hope you try it.

P.S. Ping me at asoon@sph.com.sg or @alvinsoon if you have questions and comments.