Tiny Tina's Wonderlands Preview: All aboard the hype train

Tiny Tina's Wonderlands Preview: All aboard the hype train

Note: This article was first published on 9 March 2022. For many Borderlands fans, Tiny Tina's Assault on Dragon Keep is arguably one of, if not the best written DLCs in the entire franchise. There's an entire treasure trove of hidden meanings scattered throughout the episode if you know what to look out for, and it also showcases particularly impressive character development in a franchise that usually prides itself on being properly absurd.

Anyway, it goes without saying that fans would be excited for Tiny Tina's Wonderlands, the spin-off title that develops the concept of TTAoDK and gives it a proper home. To provide some context for the uninitiated, the original DLC is built on a game of Bunkers and Badasses (itself inspired by Dungeons and Dragons, no less) played by Mordecai, Lilith, Brick, and Tina after the events of Borderlands 2. It encapsulates the franchise's chaotic gunplay and loot-hoarding mechanics within the shell of a tabletop RPG, with Tina leading the narrative as the Bunker Master.

Wonderlands thus brings back that blueprint but it's going all-in on the fantasy seasoning this time. Tina reprises her role as the whimsical and otherwise crazed narrator, and players select from a fixed roster of classes to enjoy, much like you would in a regular Borderlands title.

Of goblins and pointy things Now, unfortunately, my preview account didn't give me the full roster of classes to try out - only the Stabbomancer and Graveborn were available. As for the narrative content, the preview fundamentally comprises a quest chain that took me around two hours to run through, excluding the time spent on sightseeing.

Regardless, I decided to kick off my first run with the Graveborn, a proficient user of Dark Magic who trades health for powerful combat bonuses and passives. It's thematically similar to Krieg the Psycho's Hellborn tree, making it a great choice if you fancy high-risk, high-reward plays. The only caveat here - at least where the preview is concerned - is that the character already comes spec-ed, meaning I couldn't really customise it as dynamically as I would have liked.

Conversely, I was able to allocate my own skill points when I tried out the Stabbomancer later on, and those who enjoy playing characters like Zer0 or FL4K will certainly enjoy this class when the game finally releases. The character's wide array of pointy things, as well as his ability to turn invisible for a set period of time, is truly reminiscent of both the aforementioned Vault Hunters, though it's not really my cup of tea. I'm usually more comfortable with mid-ranged characters like Axton and Moze. 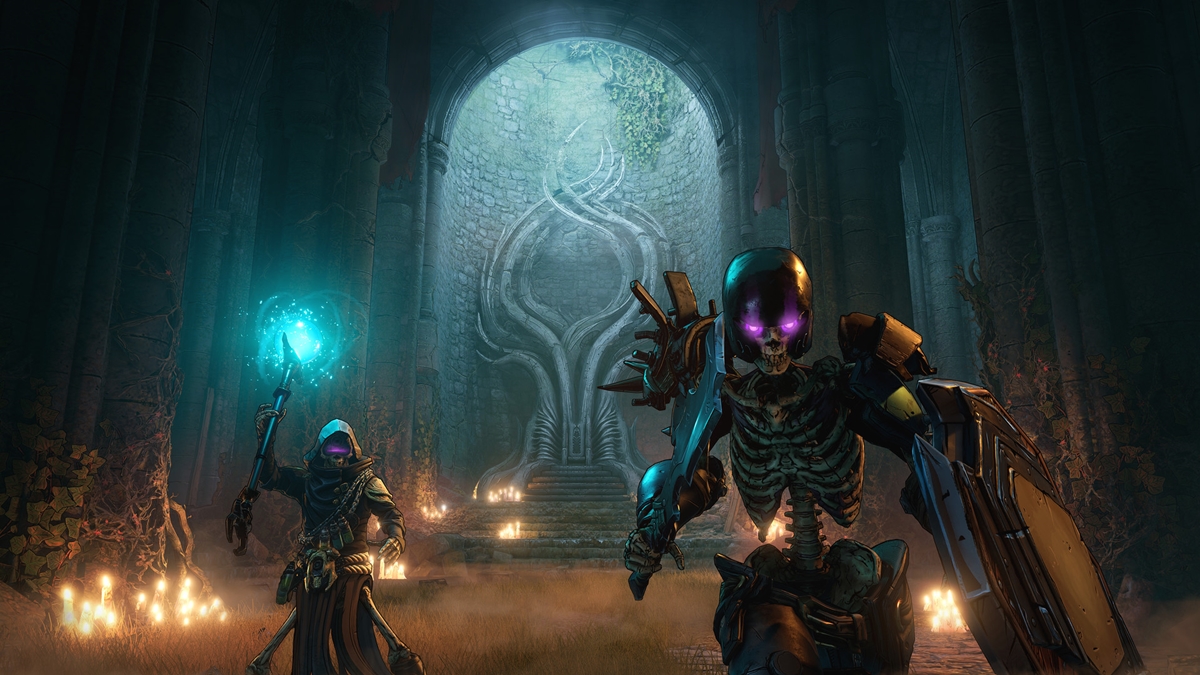 Anyway, I went and traipsed around the overworld for a bit before starting on the available story quests, which follows a group of goblins enacting some mischief. It was really quite hard not to stop and stare at the scenery though, and I have to say, it's already looking pretty damn good. Sure enough, the Borderlands flavour definitely shines through the pixel-shaded aesthetics (which naturally includes the guns) and the weird design quirks that we've come to love about the franchise, but it's also quite odd not having the usual sci-fi tech touches that we've gotten used to seeing.

Moving on, the audio is also pretty in line with what you might expect to emerge from Tiny Tina's headspace. It feels a lot more whimsical and wild than the franchise's usual moody melodies, and I think this blends particularly well with the fantasy flavour that they're going for in Wonderlands.

Speaking of flavour, longtime fans will also be happy to know that the franchise's signature gunplay is also making a return, though it's fair to say we would probably riot if Gearbox didn't do exactly that. However, there are a few tweaks to the formula, such as spells and actual melee combat, among other things. We'll get into that further on, but first I'd like to mention that the gunplay feels even more fluid than it was in Borderlands 3, and that's a really high bar.

Specifically, the actual "flow" of the characters' movements seems more streamlined than ever, apart from the occasional bug or glitch. Although the skill trees have been compressed into one per character, the transitions from guns to melee to magic spells and whatever else you happen to have on hand is buttery-smooth and natural. When coupled with the various manufacturer quirks (all of whom have been renamed!), it all comes together to provide a satisfying kick that feels new yet familiar. As for the melee combat, unlike the main Borderlands games where characters were generally stuck with a standard animation, "melee" weapons are now a full-blown weapon type in and of themselves, complete with customisable mods and attachments too.

The introduction of varying attack speeds adds even more spice to the formula. Larger weapons like axes and hammers will have longer animations but hit way harder, and the opposite is true for sleeker ones like knives and swords. Amusingly, this feels kind of like the combat aspect we always wanted but never really had the guts to ask Gearbox for, but hey, we got it anyway, and it absolutely slays - no pun intended.

Ploughing through enemies with an axe in hand is really, even immensely refreshing to have in a franchise that usually places its emphasis on firearms, so it's a very welcome addition that I'm looking forward to enjoying in full when Wonderlands finally arrives. Also, yes - I am aware that Krieg also has his melee-focused skills and all that, but to put it simply, why have just one guy with an axe when you can have like, four?

Dost thou even spell? 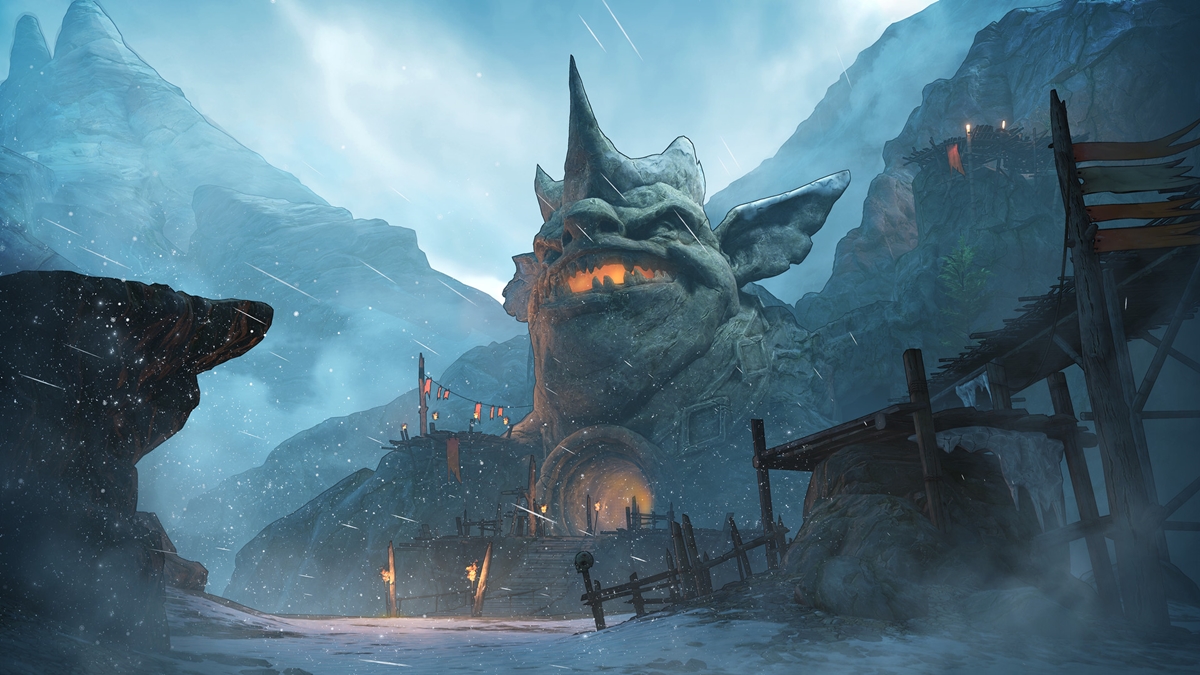 Aside from new ways of chopping people up, we've also got companions and spells in the Wonderlands equation. Regarding the former, we're already quite familiar with having minions by our side to help out in combat like with FL4K's beasts (and to some extent Iron Bear), but they seem to take a more reserved role, by which I mean you're no longer wholly reliant on them to deal the bulk of your damage. In a sense, the gameplay is more "active" this way, and it's exciting because you're forced to stay on your toes for the entirety of the fight rather than sit back and let your minions chow down on baddies.

Last but not least, the concept of Spells in Wonderlands rides the same wave as our good old grenade mods, which is quite poetic since the first iteration of "spells" were technically grenade mods in TTAoDK. Just like their counterparts, there are lots of different varieties and manufacturers with unique quirks. Some are fire-and-forget, some need to be channeled, and some even refund themselves on a critical hit. It's all pretty crazy, but hey, I don't think I would have it any other way.

So, to cut a long story short, apart from the occasional bug or glitch, the game looks (and feels) absolutely bonkers right now, and 25 March simply can't come sooner. Roll for initiative, suckas!