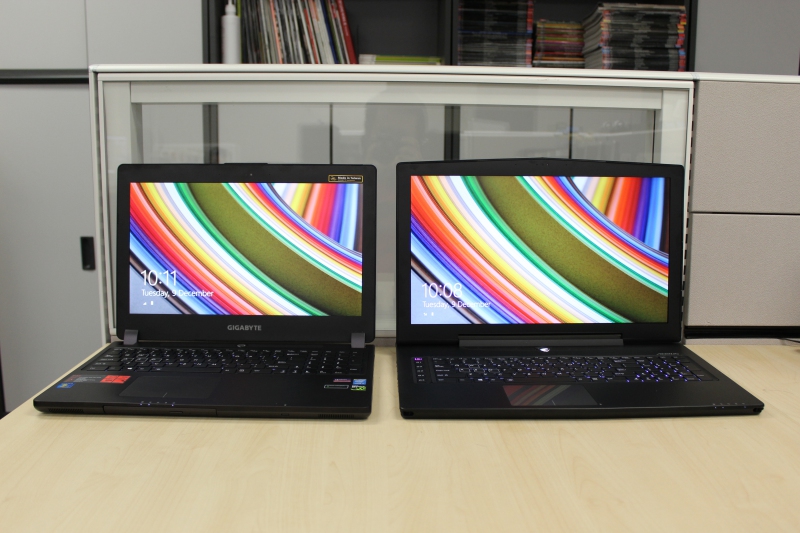 Gaming is serious business. It may be weird to think of it as a business, but the manufacturers and developers are in it for the money, not for entertainment's sake. Viewing it from that angle, it's not unexpected to have constant product refreshes or upgrades, especially in a fast moving industry like the PC gaming. With the coming of DirectX 12 API next year and the proliferation of AMD's Mantle technology, older graphics engines like the NVIDIA GeForce GTX 700M and 800M on notebooks are being phased out for top of the line units from the NVIDIA GeForce GTX 900M series, the 970M and 980M. Of course, in the future, even these top GPUs will be replaced by even better ones. But as of now, it seems like everybody's racing to get the NVIDIA's GeForce GTX 900M series into their gaming machines. That's exactly what Gigabyte and Aorus (Gigabyte's gaming notebook brand) have done.

Neither machines models are exactly new, though their internals have gone through a massive upgrades. Gigabyte's P35 series first emerged in the second half of last year. The model is not even two years old, but it is already on its third refresh. The first model, the P35K was released in late 2013. It came with a NVIDIA GeForce GTX 765M graphics before the P35W came out a few months later and got its graphics upgraded to NVIDIA's GeForce GTX 870M (among other things). Now, we're getting yet another update, and like MSI GT72 2QE Dominator Pro, this one's coming with NVIDIA's top of the line GeForce GTX 980M GPU.

Our handy table below will give you a clearer picture of how both these powerful gaming machines stack up:-

Two gaming notebooks, both on their third revisions. Which one is best for you? Continue on to find out.