We are testing AiMesh using the same setup that we used to test other mesh networking systems. We have two notebooks, one acting as a host machine and the other as a client device. The router, or in this case, node, acts as a gateway. Since mesh networking systems typically manage their own wireless and channel settings on their own, we will enable Smart Connect and let the ASUS routers manage these settings.

Since we are measuring the mesh performance, we will only be testing the extreme ranges:

•    15m - To simulate extreme distances on the same floor (e.g. router in the hall, but test point is at master bedroom toilet)
•    Second story - One floor above
•    Third story - Two floors above

To evaluate the performance of ASUS AiMesh, we will be comparing it to the Google Wifi and Netgear Orbi. The former is one of the most popular mesh networking systems, while the latter offers superlative mesh performance and was the winner of the Best Mesh Networking System award at our Tech Awards 2018. 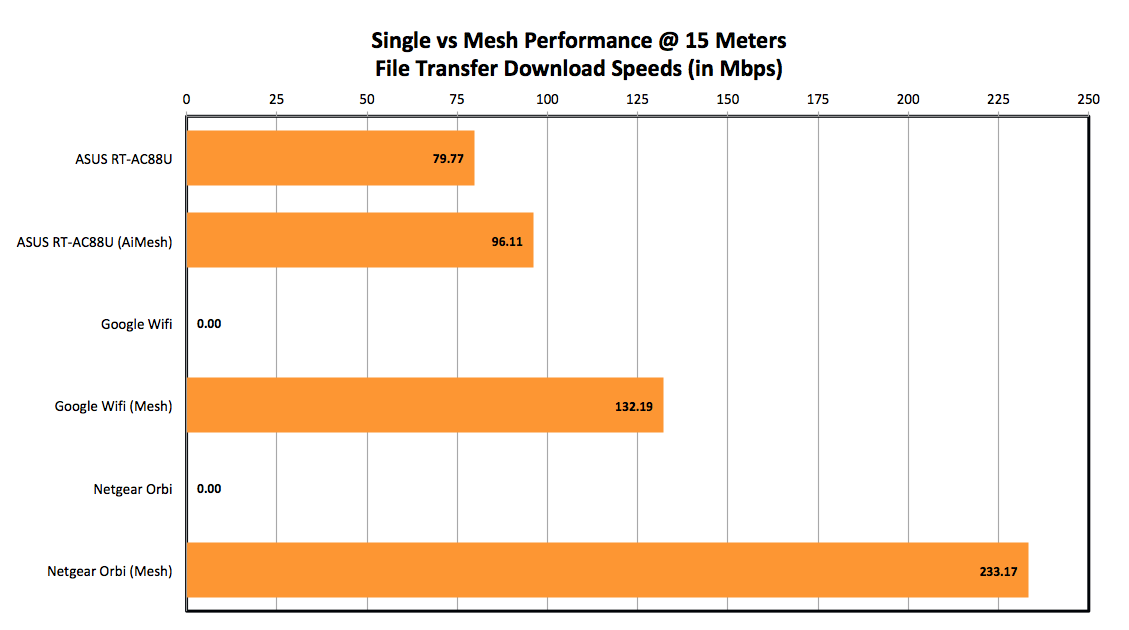 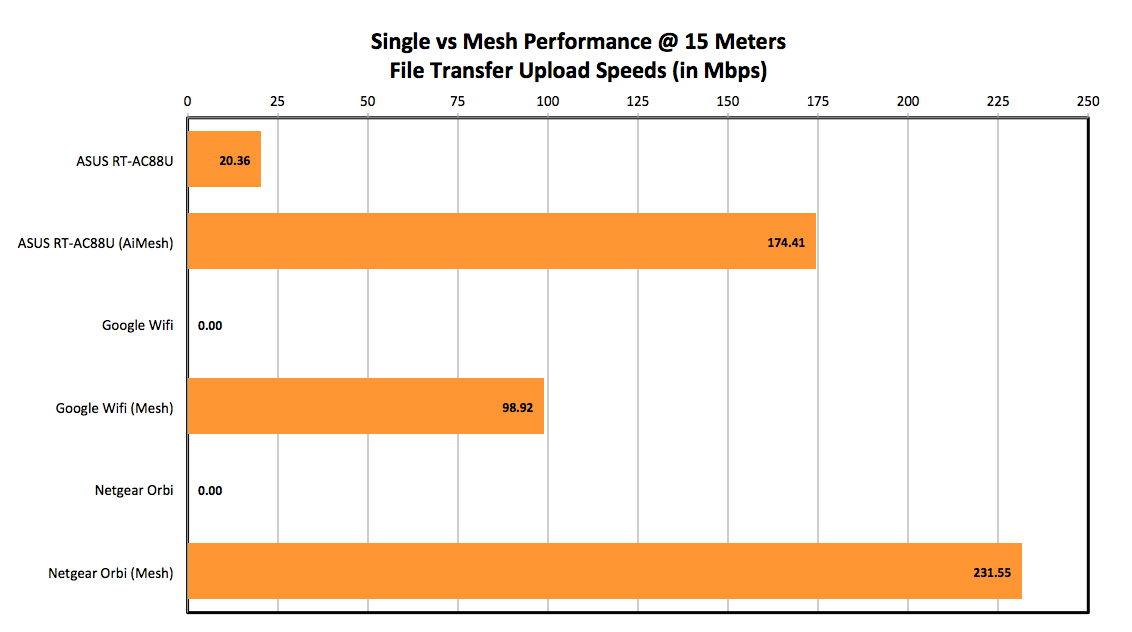 At 15 meters, we could still maintain a connection to the single  ASUS RT-AC88U router. We were using Smart Connect and could see that the client device was connecting to the RT-AC88U via 2.4GHz. Download speeds were quite decent at 79.77 Mbps but upload speeds were dismal at just 20.36 Mbps. Still, it's interesting to note that the single node performance of the Google Wifi and Netgear Orbi was non-existent at this range and a traditional router like the RT-AC88U had better range to service the intended test spot.

With the RT-AC86U acting as an AiMesh node, download speeds improved by about 20% to 96.11 Mbps. It was encouraging but it was no match for dedicated mesh networking systems like the Google Wifi and Netgear Orbi. Upload speeds, however, were much more impressive. In AiMesh mode, we managed 174.41 Mbps. That's an improvement of a staggering 850%! Upload speeds far surpassed the Google Wifi system and weren’t that far off from the Netgear Orbi. 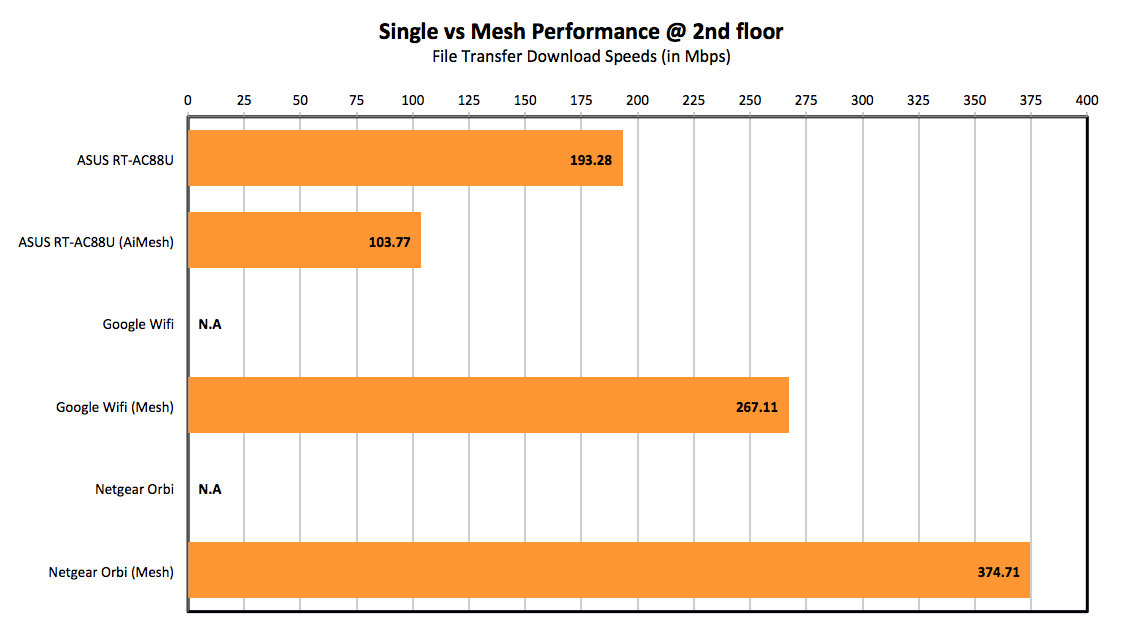 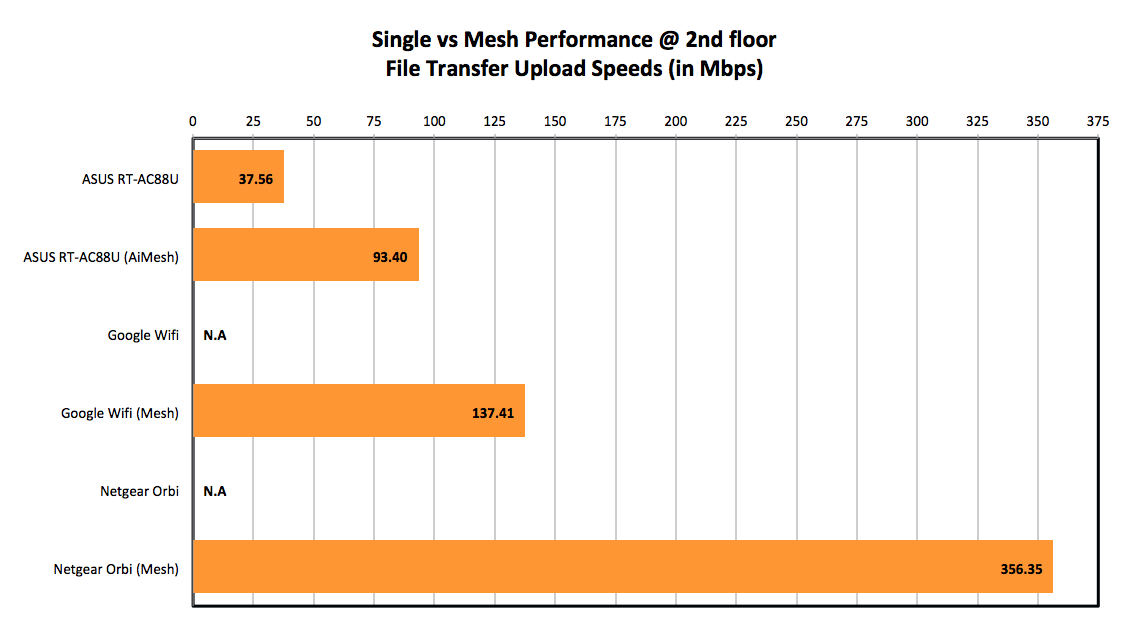 From the second floor, we could still maintain a good connection to the RT-AC88U through its 2.4GHz network. Download speeds were 193.28 Mbps while upload speeds were once again lower at 37.56 Mbps.

In AiMesh mode, download speeds took a dip to 103.77 Mbps. We suspect that there are handing off issues where the AiMesh router, in this case, the single RT-AC88U, still has a strong presence. From the second floor, it seems that the client device is unable to properly determine if it should connect to the AiMesh router (RT-AC88U) or AiMesh node (RT-AC86U). In our tests, it seems to have connected to the AiMesh node, which resulted in data having to travel a longer distance which resulted in lower speeds.

On the other hand, upload speeds improved significantly from 37.56 Mbps to 93.40 Mbps - an improvement of over 250%. In this case, with upload speeds already so poor when connected to the AiMesh router, it makes sense to rely on the AiMesh node for better upload performance.

Since we only have two ASUS routers, we will be measuring performance by connecting to the AiMesh node on the second floor. 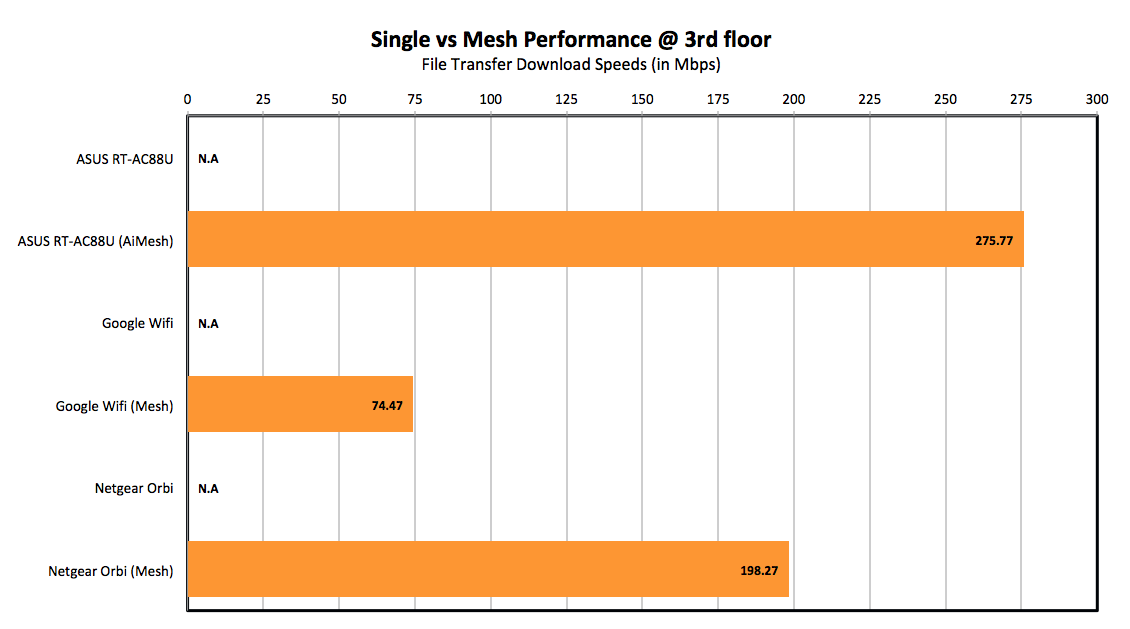 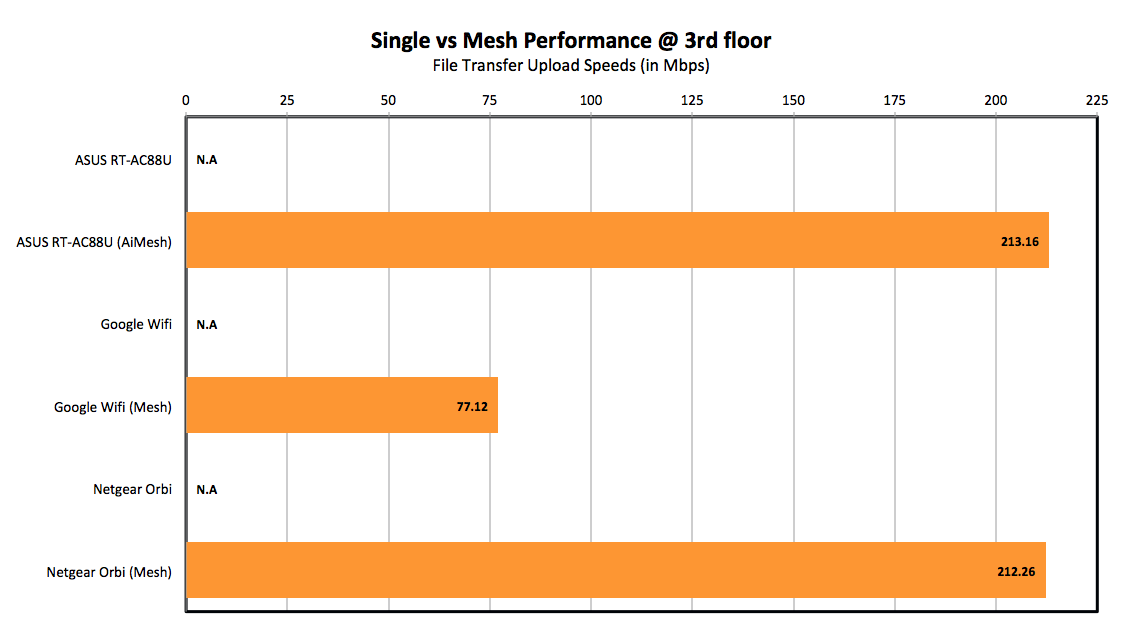 From the third floor, we could no longer establish a connection with the AiMesh router (RT-AC88U). We could, however, still connect to the AiMesh node (RT-AC86U) on the second floor and the results were very promising. We achieved download speeds of 275.77 Mbps, which outstripped even the Netgear Orbi by 39%. Upload speeds were equally good at 213.16 Mbps, which just marginally faster than the Orbi.

Our benchmark results show that while AiMesh works, it isn’t perfect. It seems that AiMesh has some problems determining which is the best router to connect to at ranges where the client device is within working range of both the AiMesh router and AiMesh node.

In short, AiMesh is a good way of putting your old ASUS routers to use - as long as your routers both support AiMesh. It still needs to iron out some of its kinks. But if ASUS manages to refine it, it could easily give ASUS an edge in the router market as it would encourage existing ASUS owners to upgrade to another ASUS router. Even in its current form, we think it is one of the best new features that we ever seen introduced in a router.