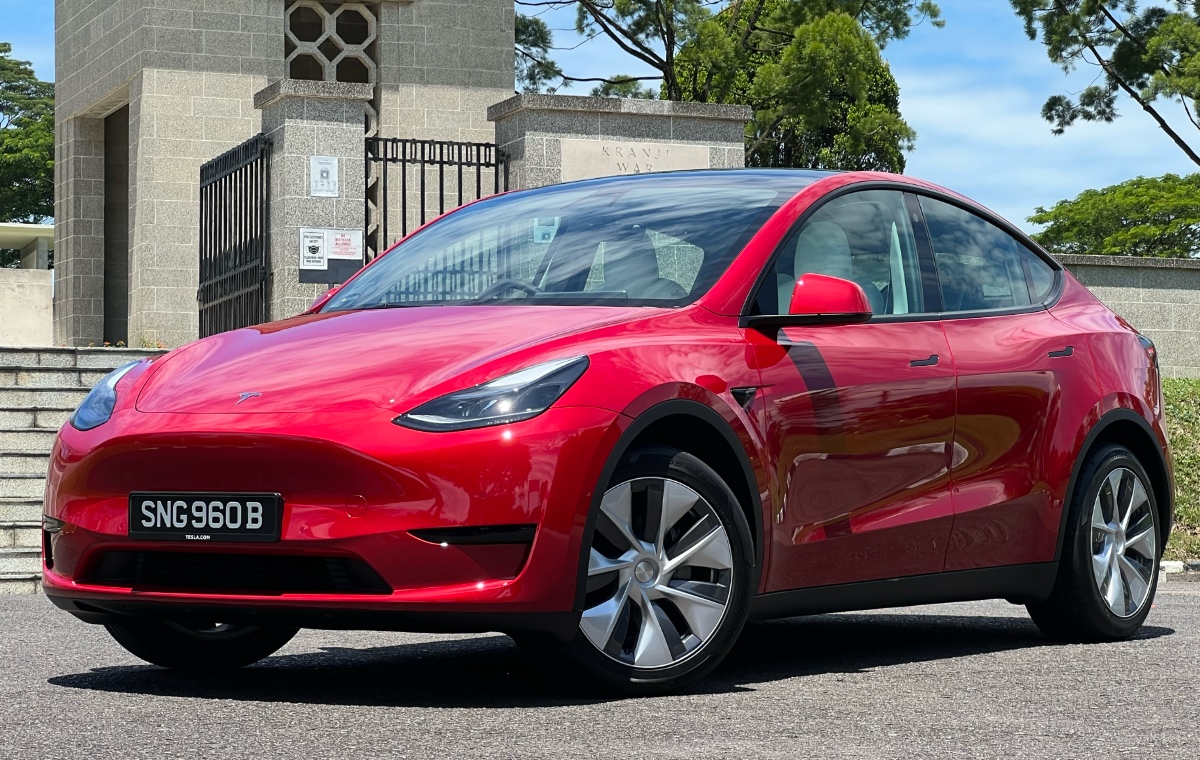 Getting into a Tesla for the first time?

It doesn’t matter how many cars or EVs you’ve driven, you will be flummoxed the first time you get into a Tesla Model Y. Nothing is where you expect it to be.

To begin, there’s no start button. Then you realise there are no buttons to adjust the side mirrors and there’s no latch to open the glove box. How do I direct the air-conditioning to my face? It’s such a bloody hot day. Save for the two scrolling wheels on the steering wheel and a large display in the middle, the cabin is bare. At this point, you realise that you need to recondition yourself to drive the Tesla. Much like how Tesla isn’t like any other automaker, a Tesla is like no other car.

The Model Y is Tesla’s compact SUV and the second model to be officially offered by the brand here. Given the popularity of SUVs, it could very well be Tesla’s most important model. Visually, it looks like a larger Model 3 on stilts. It’s unmistakably a Tesla, whether that’s a good thing or not, I’d leave it up to you to make up your mind. I think it looks a bit generic but it is certainly clean and unfussy – there are no grilles, vents, or spoilers for styling’s sake. 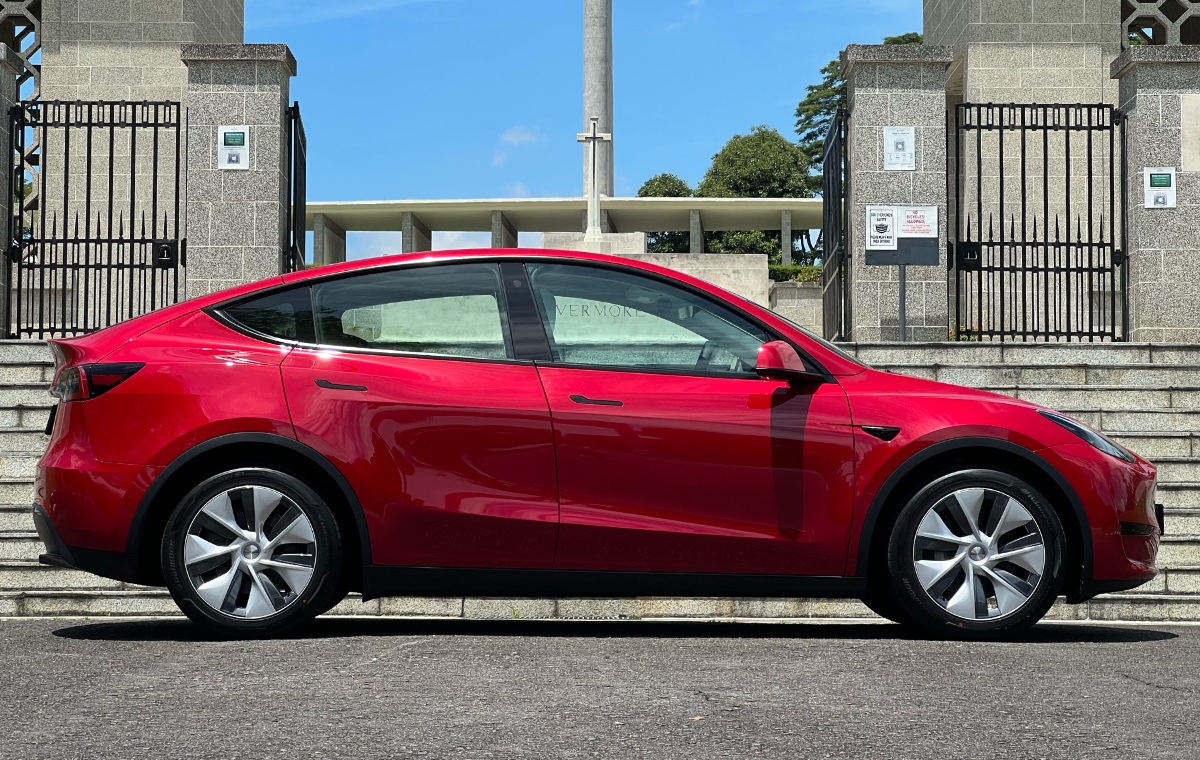 As I said earlier, the interior is bare and just about everything has to be controlled using the large 15-inch touchscreen display. Yes, even opening the glove box requires the display. I suspect drivers who are owning a car for the first time will get accustomed to this quicker than those who have been driving for a while. The screen is large, sharp, and bright, and the coating Tesla uses resists fingerprints and smudges remarkably well. 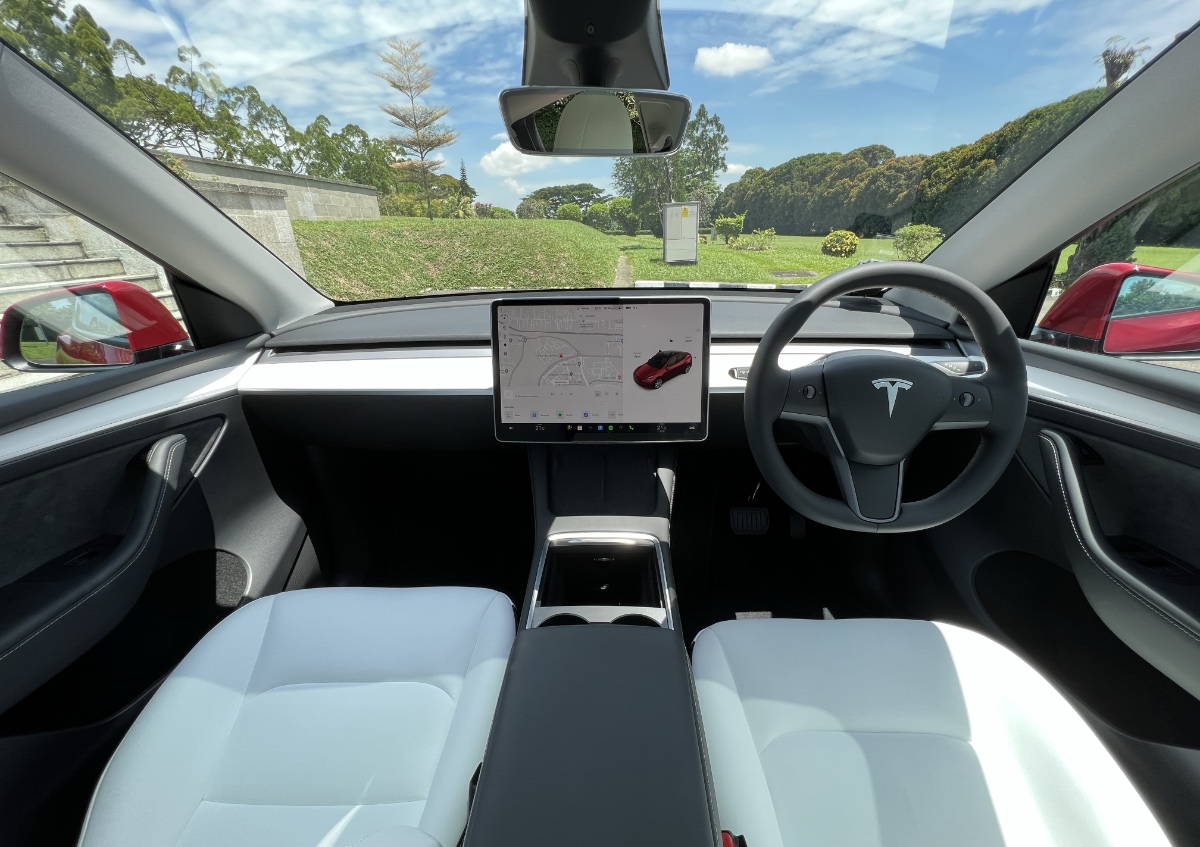 The interface, however, could be improved. The speed readout is small and the blind spot camera that comes on whenever you indicate a lane change is nestled in the bottom right and therefore blocked by the steering wheel. Most of all, far too many touches are required to get simple things done like adjusting the side mirrors and air-con. Not only can it be dangerous (because you have to look at the screen when you are adjusting), but it also feels like Tesla is trying too hard to be different. That said, the driving visualisation preview, which shows what's around you using the car's cameras and sensors, is very cool.

There’s no Apple CarPlay or Android Auto connectivity, but that’s not a big deal because Tesla’s own navigation app works well. The app was designed to find the most efficient route and even estimates how much charge you’d be left with when you reach. More importantly, it shows you the location of Tesla Superchargers and their availability in real-time. There’s also a Spotify app for Spotify subscribers. If you don’t use Spotify, there’s still Bluetooth audio. 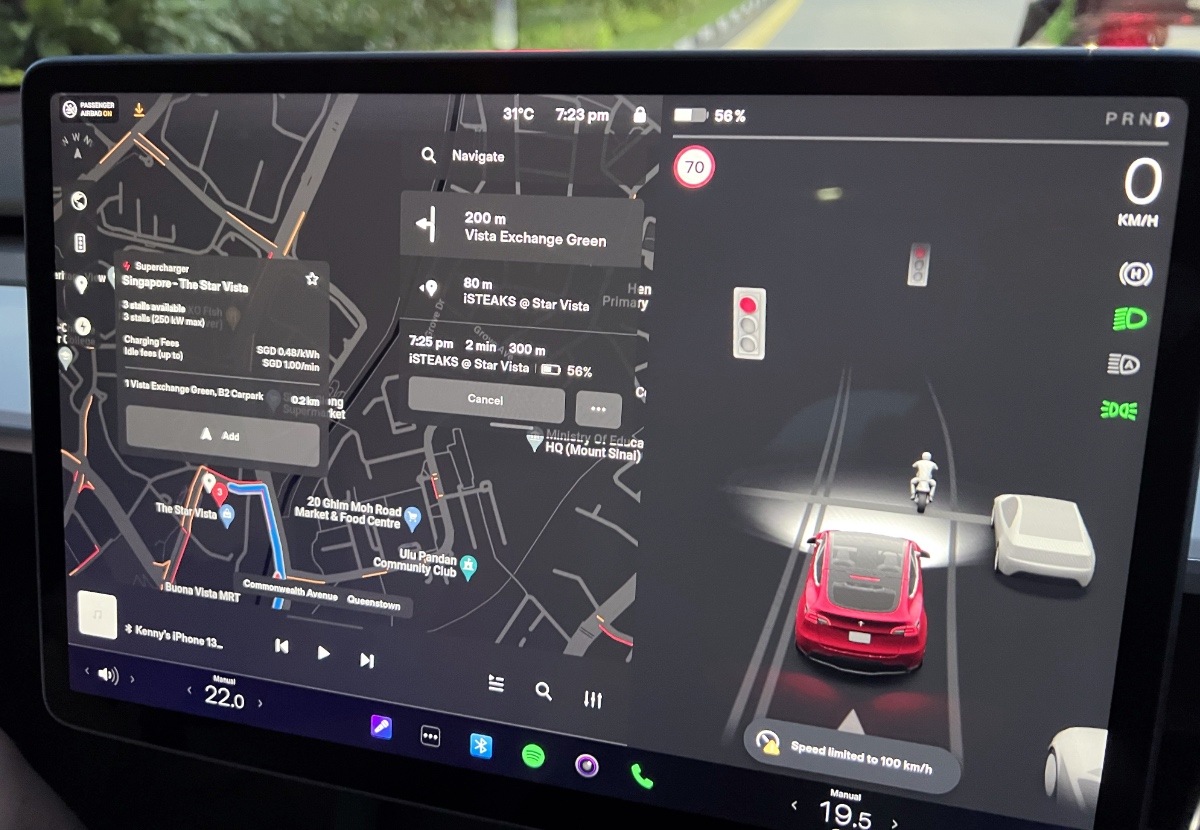 There are two versions of the Model Y. There’s the more powerful Performance version which has electric motors on both of its axles, and then there’s the less powerful but more affordable rear-wheel drive version that I’m testing that has a single electric motor on its rear axle. Even though it only has a single motor, the power output is rated at 320hp and 430nm of torque.

On the road, the Model Y never feels anything less than brisk. Like all EVs, the powertrain is hyper-responsive. This isn’t a small car but the way it accelerates at city speeds will have you feeling like you are driving a much smaller car. Tesla claims the rear-wheel drive version of the Model Y will from 0 to 100km/h in under 7 seconds and it feels entirely believable. 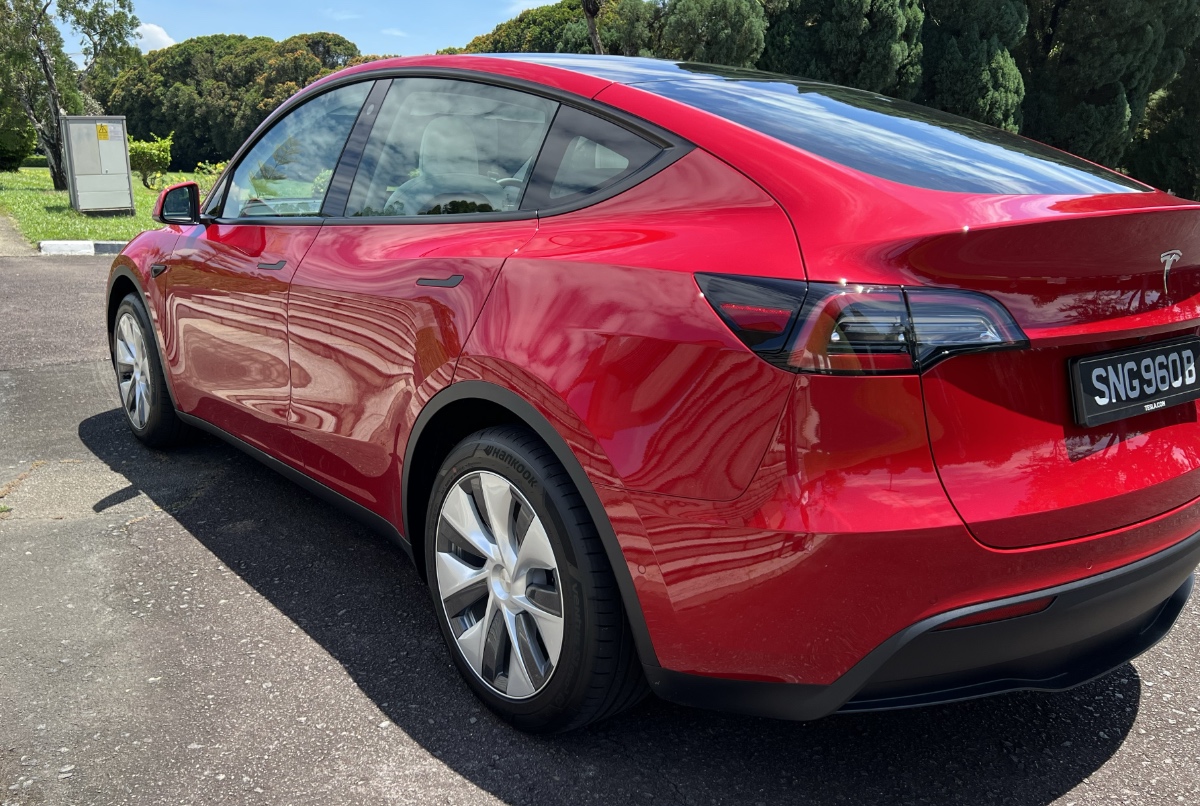 It’s easy to get used to the effortless performance. What’s harder to get used to, however, is how aggressively the car scavenges energy. The first time you take your foot off the throttle of the Model Y, you’ll lurch forward and be surprised at how much regenerative braking there is. It’s a level that most people would regard as “strong.”

And unlike other EVs, Tesla does not give users the option to vary the intensity at which the car scavenges braking energy. This, coupled with its elevated SUV ride height and unquestionably firm ride, means new drivers will likely experience a lot of unintended pitching motion during their first few hours with the car and feel sick from it. Fortunately, this goes away once you learn how to feather the throttle and maximise the use of adaptive cruise control on highway journeys.

There have been complaints about road noise but I didn’t find it to be too bothersome even over poorly paved roads in the more rural parts of Singapore. At any rate, any type of unwanted noise can be easily suppressed by the quite excellent 13-speaker sound system. 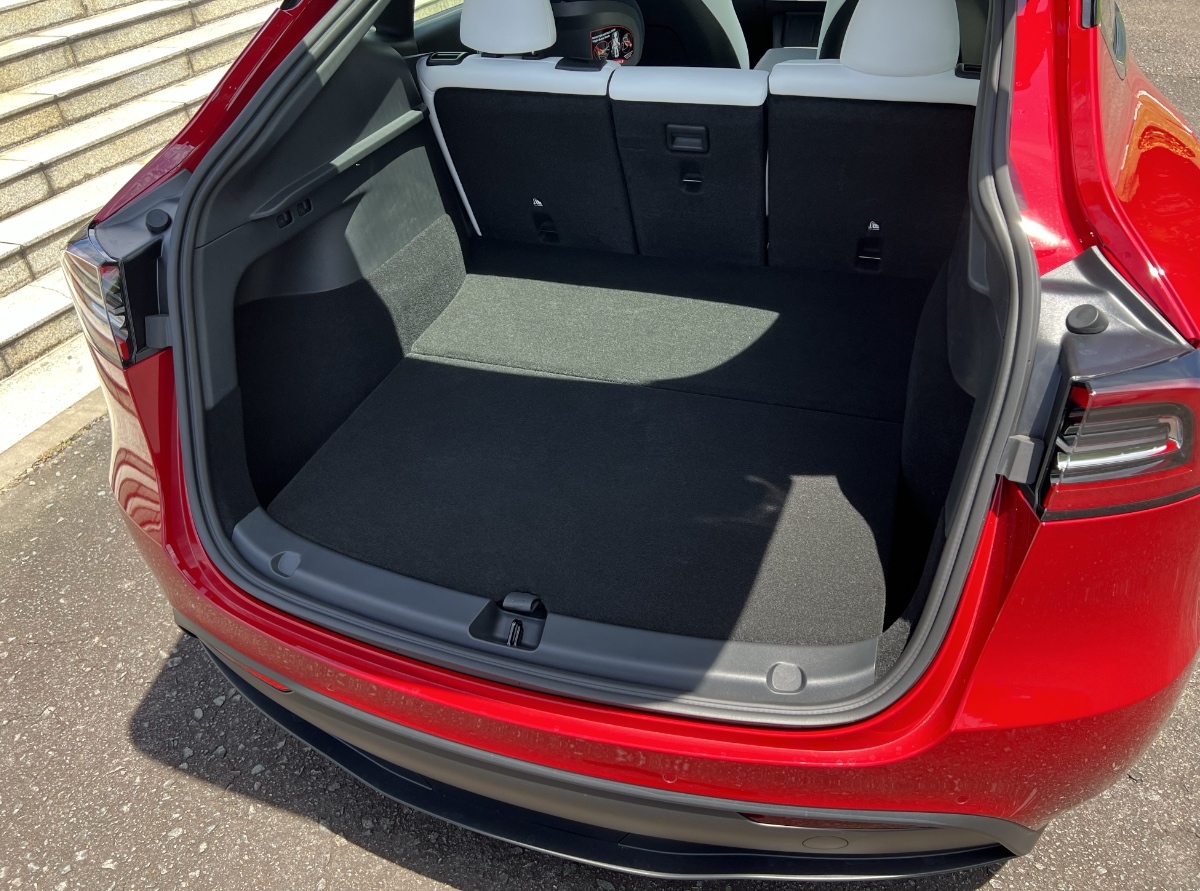 Let’s face it. No one is buying a Tesla for the way it drives and rides. It’s a proficient thing that gets you from one point to another, but the really great thing about the Model Y is just how practical it is. The cabin is roomy and you can comfortably seat three in the rear.

Storage space is impressive. The rear boot has a capacity of 867 litres which expands to a whopping 2,100 litres if you knock the seats down. When the rear seats are folded down, you can even fit a bike with its wheels on.

Under the rear boot floor is another compartment that will easily take a couple of weekend bags. And because there’s no engine up front, the Model Y has a frunk (like a 911) that is good for even more bags. There’s loads of space in the cabin too. Because there’s no transmission tunnel, the centre console storage bin is cavernous and will fit large bottles of water and various personal effects. 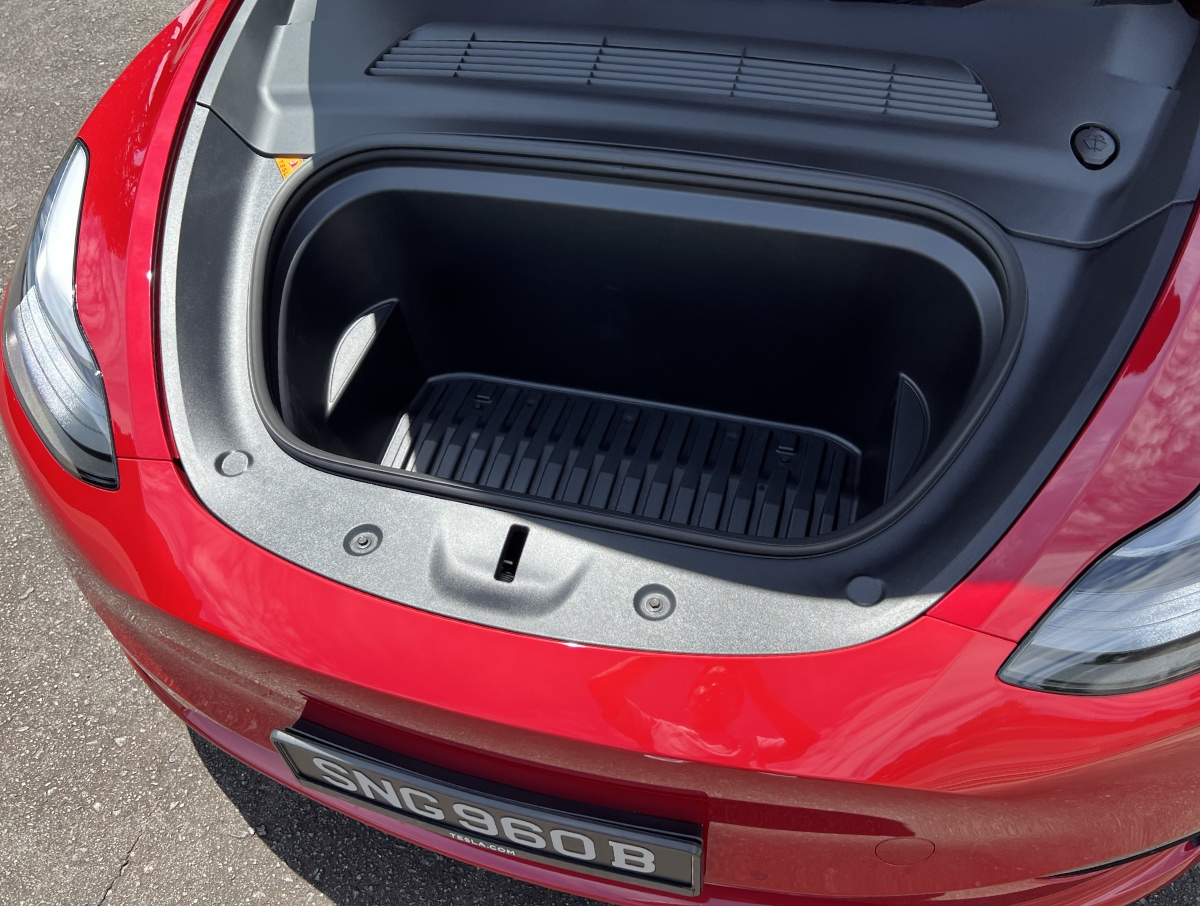 Charging facilities are good too. In between the centre console and the digital display are two wireless charging pads for phones. There are also four USB-C ports – two in front and another two behind – that can be used for charging other devices.

Speaking of charging, it’s probably a good time to talk a little about how the car charges. Obviously, Tesla owners will want to make use of the company’s network of Superchargers of which there are 24 Superchargers spread across 8 locations on the island.

There are two reasons why. As I mentioned, you can easily locate and see the real-time availability of these Superchargers on the car’s navigation app. And just as importantly, it’s fast. I managed to get from 56% charge to 93% in under half an hour. And I was told it can get from zero to 80% in around the same time too. 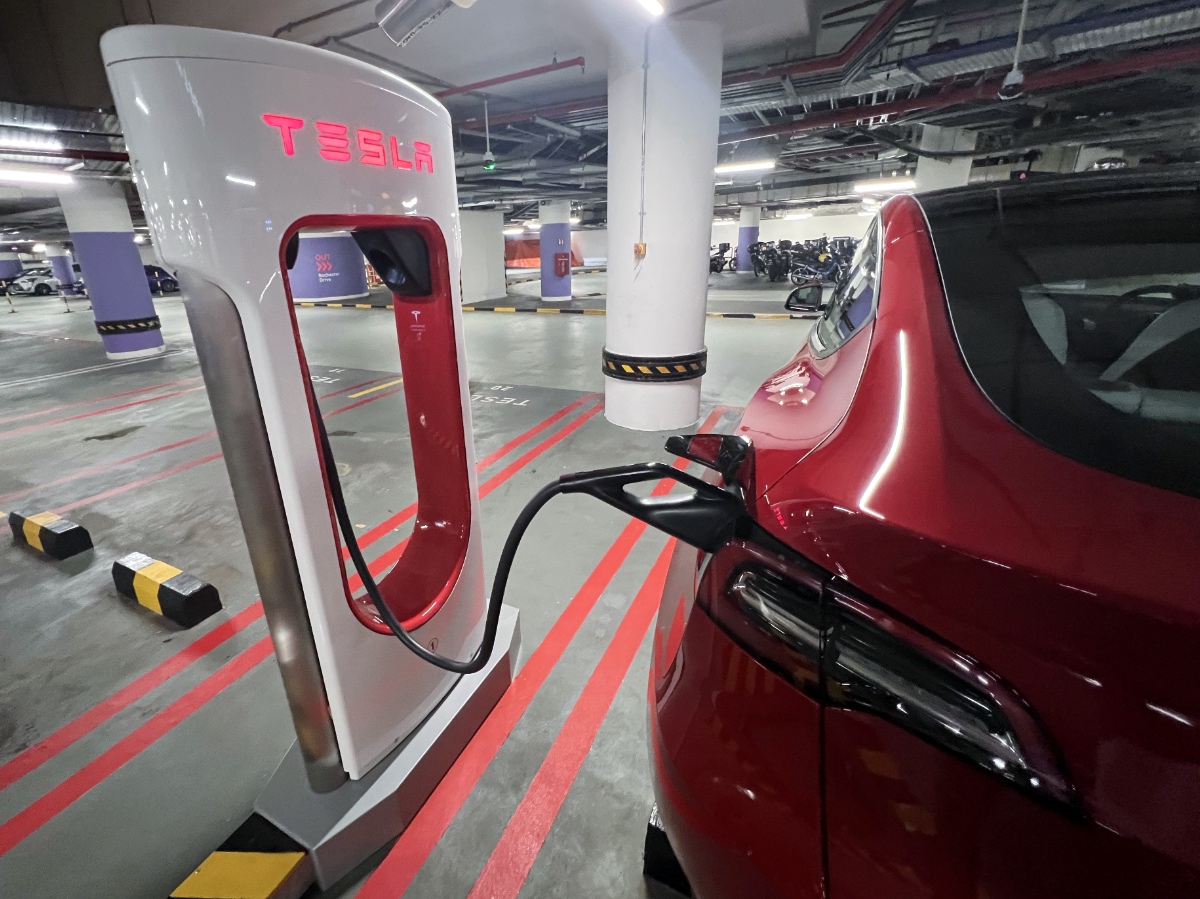 Tesla quotes a 455km range (WLTP) for the rear-wheel drive model. The company famously does not disclose battery capacities but it’s easy to use some math to work out that it’s around 75kWh. In my 24 hours with it, I managed slightly over 200km and had an average energy consumption of 170Wh/km. Assuming a 75kWh battery capacity, that means I’d easily get at least 400km from a full charge before I have to visit a charger. For drivers without their own means of charging, this means they’ll probably have to visit the charger once every week to keep their Model Ys running. Naturally, trips up north are going to be challenging. EVs are not the ideal devices for road trips.

As for costs, Tesla charges S$0.48 per kWh at its Superchargers, which means a full-charge will set you back around S$36. And with a range of around 400km, it goes without saying that the cost per kilometre of driving a Tesla is substantially less than that of an ICE (internal combustion engine) car – especially if you can charge it at home where the cost per kWh can be much lower.

At the end of my 24 hours with the Model Y, I was conflicted. Some of the controls are counter-intuitive  and baffling (I still can't work out why can't the glove box and side mirrors have physical controls. What if the screen fails?). The regenerative braking also takes quite a bit of getting used to it and will definitely leave newcomers feeling sick for the first few hours, at least.

But once you learn how to feather the throttle and how to get around its quirks, the rest of the car – what it can do, how it does it, and the way it can fit into people’s lifestyles – is so competent. The amount of space and stuff it can haul is sensational, performance is never lacking, and it has a wealth of safety and security features (I wish I had a Sentry Mode on my own car). The range is decent too and range anxiety shouldn’t be too big of an issue even if you don't have your own charging facility because of Tesla's growing network of Superchargers (you can use SP's chargers too).

I can totally see why some Tesla owners are completely enamoured with their purchase. If you are shopping for a compact SUV and you are ready to go electric, the Tesla showroom should be your first port of call, and the Model Y the first car you go test drive. Just make sure you watch out for that regenerative braking.