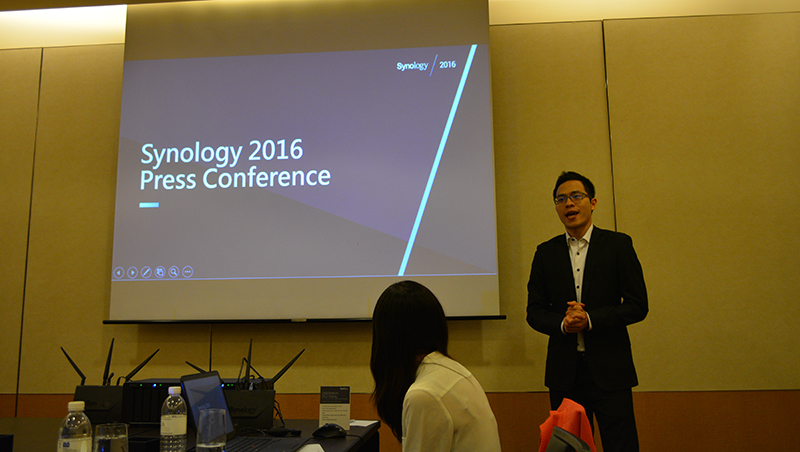 Synology’s conferences are an annual affair, where the company takes the opportunity to trot out its new portfolio of devices and software for the coming year and showcase its latest hardware. These yearly conferences are held across the globe, and the 2016 conference is slated to be held in 18 cities, up from 15 last year.

We were present for the Singapore leg of Synology’s global tour to get a look at the goodies Synology has got planned for the future and the new technologies it will be rolling out. And with issues like data protection, cloud storage, and the continued proliferation of wearables and mobile devices at the forefront in recent times, Synology says its products are designed in line with market trends and demands.

Here are some of the key highlights from the event:

Right off the bat, we were introduced to DiskStation Manager (DSM) 6.0, the latest version of Synology’s NAS OS. The new OS has been revamped from the ground up, and now comes with several baked-in features that will satisfy enterprise and power users. 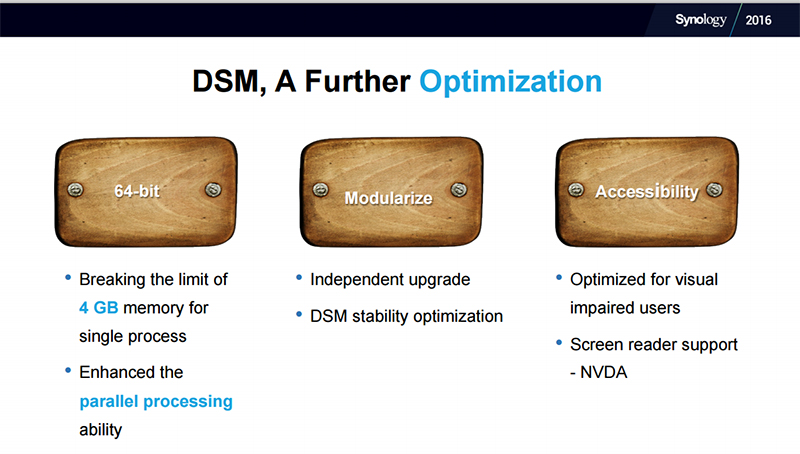 For instance, it now supports a 64-bit architecture, which means that it can utilize more than the 4GB of memory that 32-bit systems are limited to. As you might imagine, this has the potential to greatly improve system performance.

Furthermore, it has adopted a modular approach to the implementation of application functionality. Previously built-in applications are now applied as independent upgrades, improving on system reliability and flexibility. This also looks like it’ll help users keep their systems running leaner and quicker. 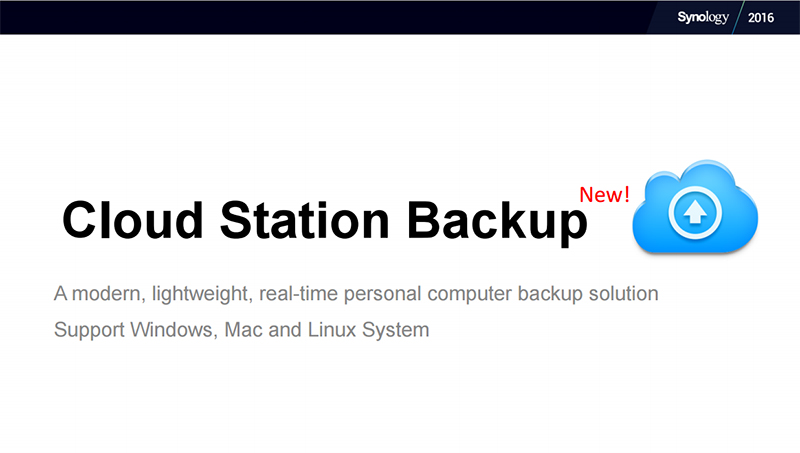 In order to make file recovery faster and more efficient, it dispenses with a rigid system of scheduled daily backups, opting instead for a more dynamic and flexible system that creates a recovery point only when files have been modified. This has the added benefit of doing away with meaningless recovery points that are created even when no data has been changed. 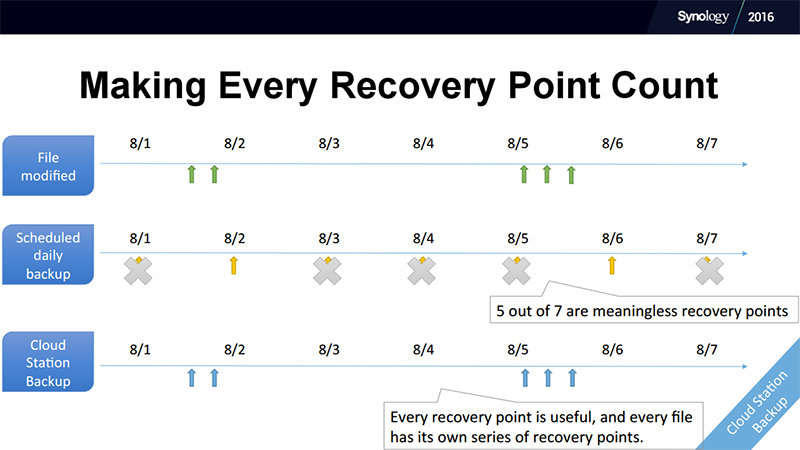 To further ensure that you only need to deal with relevant restore points, it’s also implemented something called “Intelliversioning”, an algorithm that keeps only the most important versions of each file. 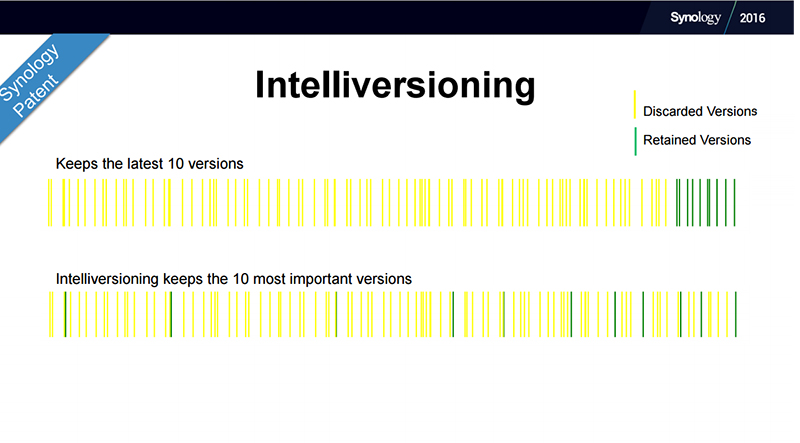 Another feature we liked was something Synology called “Snapshot + Replication”, thanks to the support for the Btrfs file system, which also enables things like data deduplication and improved file consolidation across multiple drives. Snapshots of files can be taken as frequently as every five minutes, which effectively protects against things like accidental deletions. This reduces the Recovery Time Objective (RTO), the time within which a business process should ideally be restored in the case of a disruption to avoid unacceptable breaks in the workflow. This feature is especially useful because unlike working on a local computer, deleting files on NAS systems is often a permanent affair - there's no Recycle Bin to help you restore files, they are instantly gone. 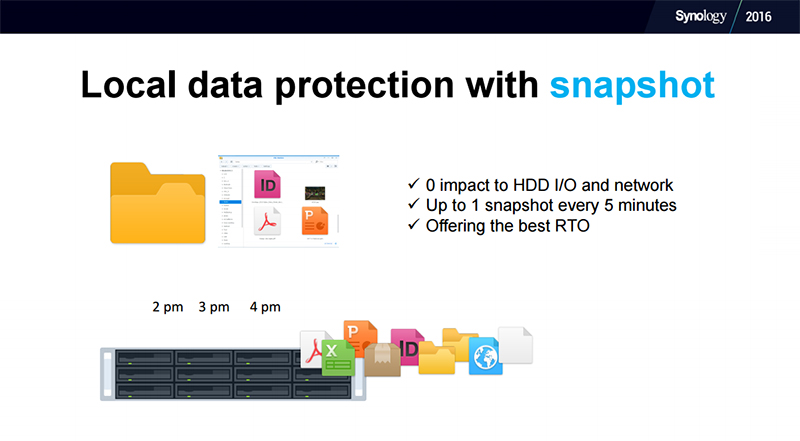 And even though Synology’s business clearly depends on you buying into the merits of a private cloud, it still gives you the option to back up your data to business-grade cloud services like Amazon Cloud Drive and OpenStack Swift. This means that you can upload the same sets of files to multiple public clouds, ensuring that your data will always be available. 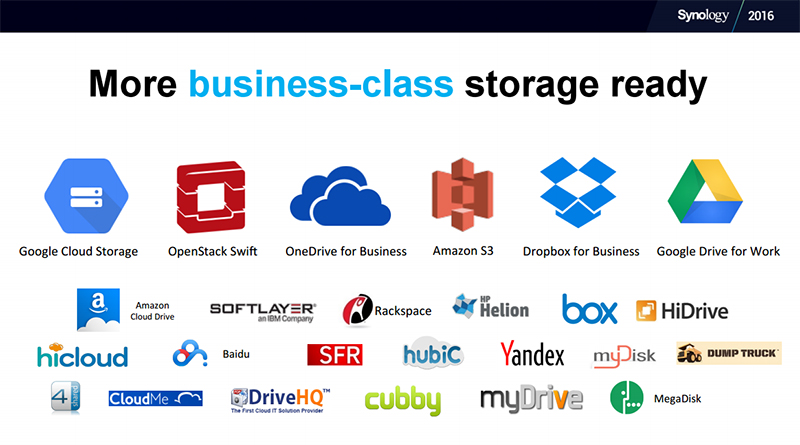 And here’s where we begin to venture deep into enterprise technology. A lightweight container technology called Docker DSM supports multi-tenant environments by containing the virtualization in the application layer, thus eliminating the need to set up a virtual machine. 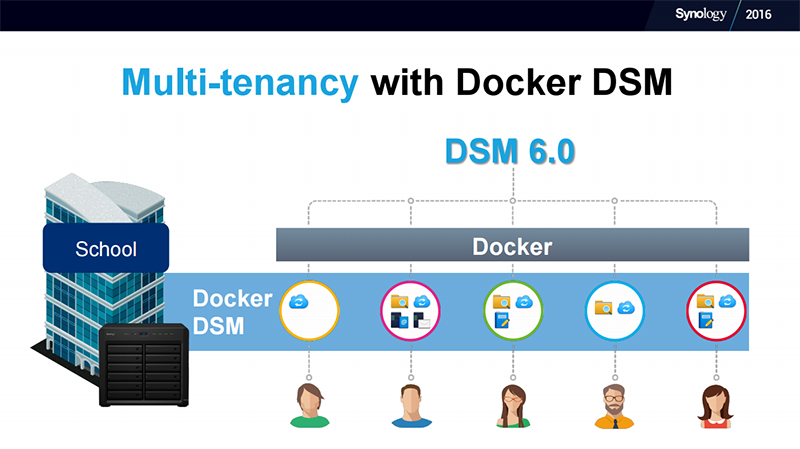 Then there’s Virtual DSM, a more comprehensive virtualization technology for more demanding enterprise customers. This is the real deal – a hypervisor or virtual machine monitor is used to partition the system and create virtual machines. 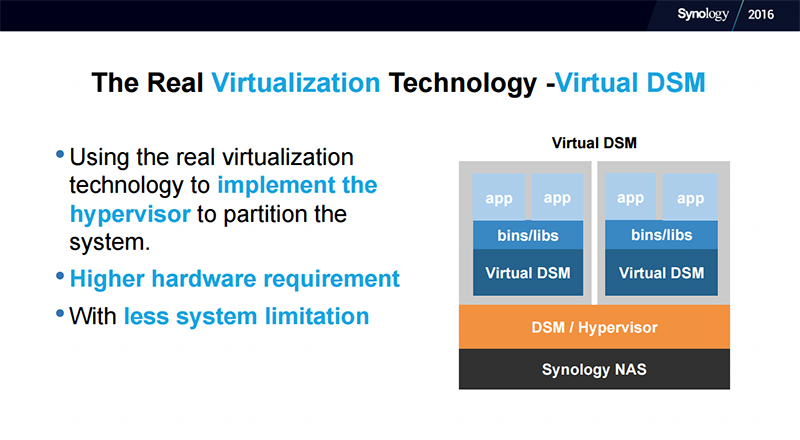 Virtual DSM also supports Live Migration, which allows workloads to be migrated to another host with zero downtime or disruption. Synology had a live demo of this for us, where the video played in the background even as the migration was going on. This means that employees in a company can continue to access resources on the NAS system even as it is being moved from one NAS system to another. 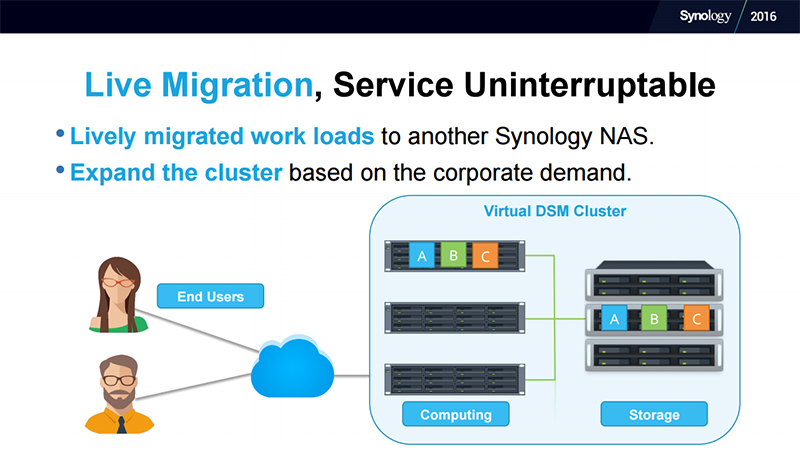 Synology also introduced an entire suite of office productivity apps designed for collaboration and security. First of all, there is MailPlus, a private cloud-based email service that allows you to create your own mail server on your own private cloud. This looks like it'd be good fit for businesses that are concerned about privacy and want to have better control over their email servers. 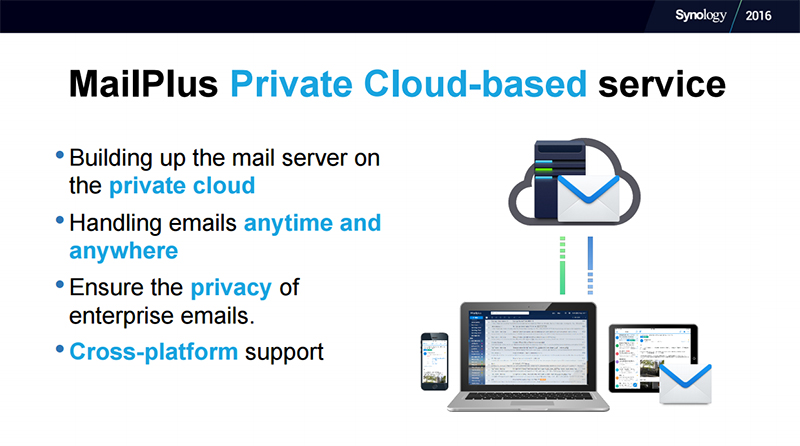 Here's a look at the interface below. We're not pointing fingers, but that's one very familiar looking interface right there. You're also able to drag and drop labels onto emails to categorize them, and also customize your background with select themes. 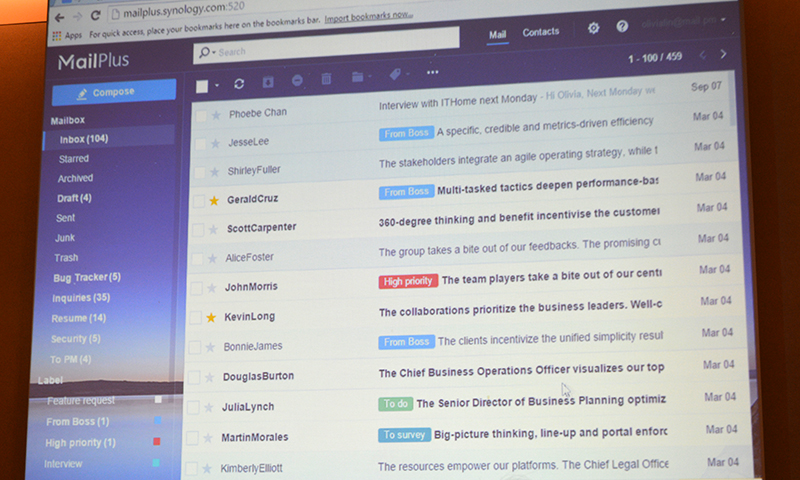 There was also Spreadsheet, Synology's equivalent of - dare we say it - Google Sheets. You get the expected features like online group collaboration, and the ability to browse and restore your editing history in case someone with butter fingers accidentally deletes an entire column of figures. 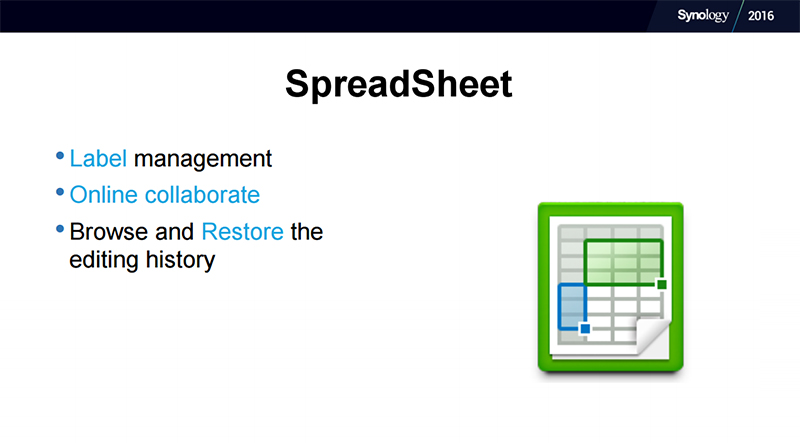 For note taking, you have Note Station, which allows you to take notes offline and group related notes into notebooks. There's even a quick way to convert tables to graphically pleasing charts like the one you see below. 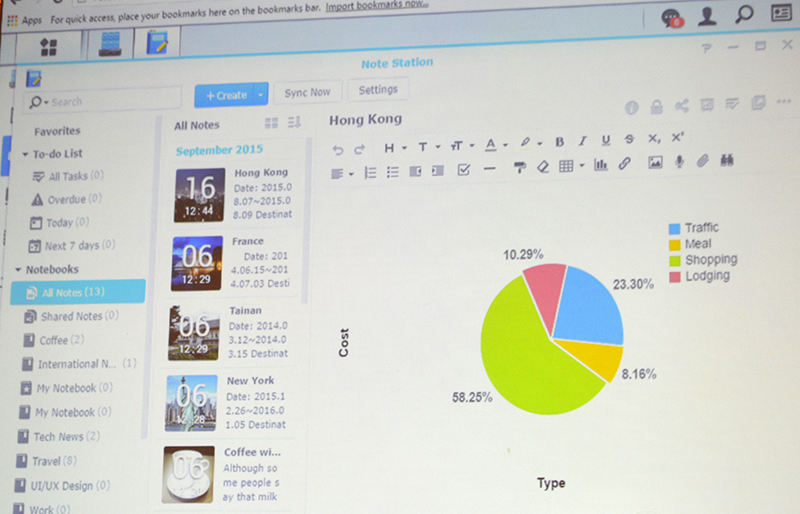 Wearables support and a video library

Finally, there’s support for one of the hottest wearables around, the Apple Watch. According to Synology, DSM 6.0 is the first NAS OS to do so with its DS note and DS audio mobile apps. This essentially allows you to use simple gestures or voice control to check or create notes on the watch itself, and even play music that's stored on your own private cloud.

The Apple Watch pairs with your iPhone 5 and above via Bluetooth, allowing you to play music as long as the devices remain paired. 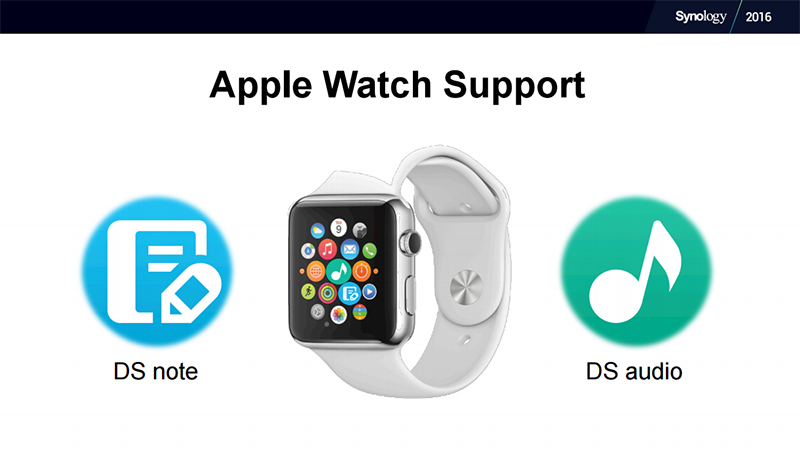 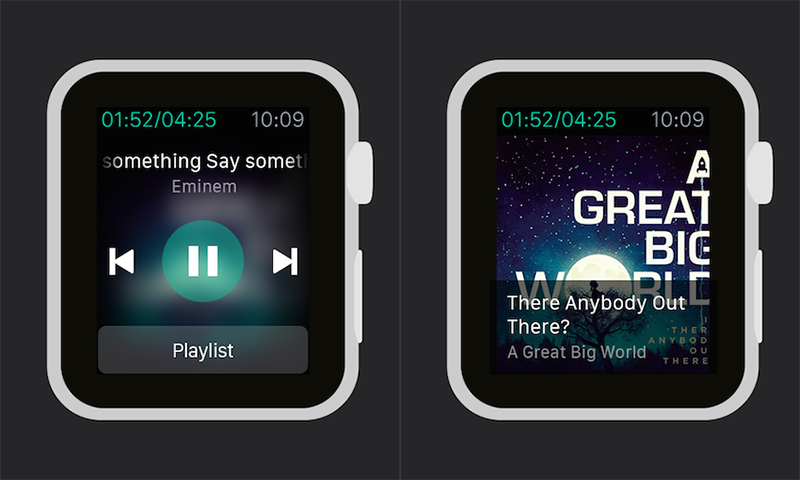 And then there’s Video Station, a sleek-looking video interface that lets you arrange your movies into playlists and automatically grabs information about films you upload from the Web. 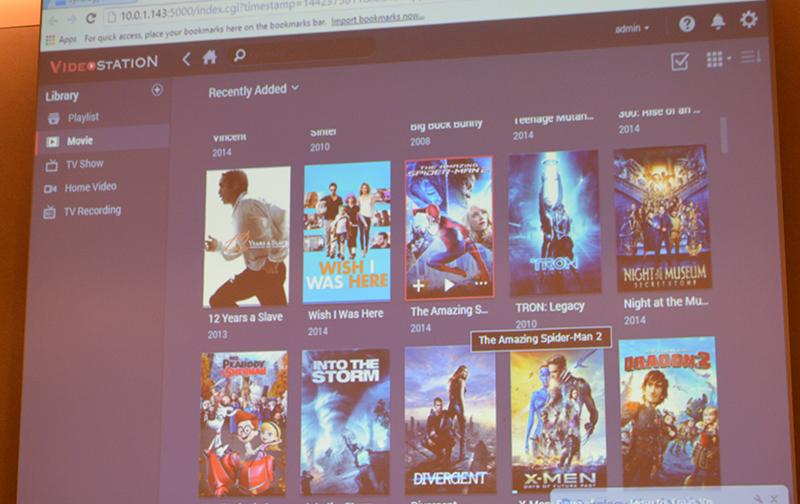 It also supports Windows 10 and offline transcoding, allowing users to take advantage of the universal Windows 10 app platform and switch between different devices to get their movie fix. 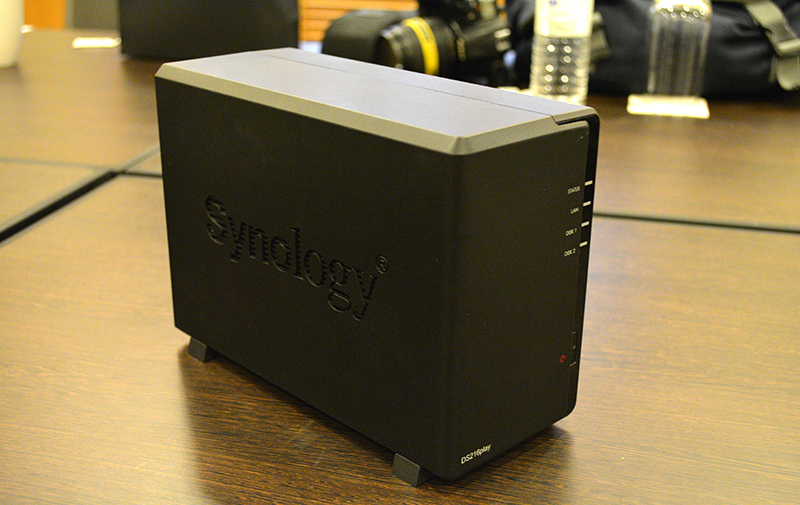 Synology also introduced us to the DS216play, one of two new NAS devices and part of its consumer-oriented Play series of products. Here’s a look at the key specifications of the device:

The DS216play is a two-bay device that will be introduced to the market at an even lower price point that its predecessor, the DS214play. You can find the latter device on Amazon for about US$300, but Synology says that we can expect the DS216play to be much more budget friendly. It is expected to be available sometime in October. 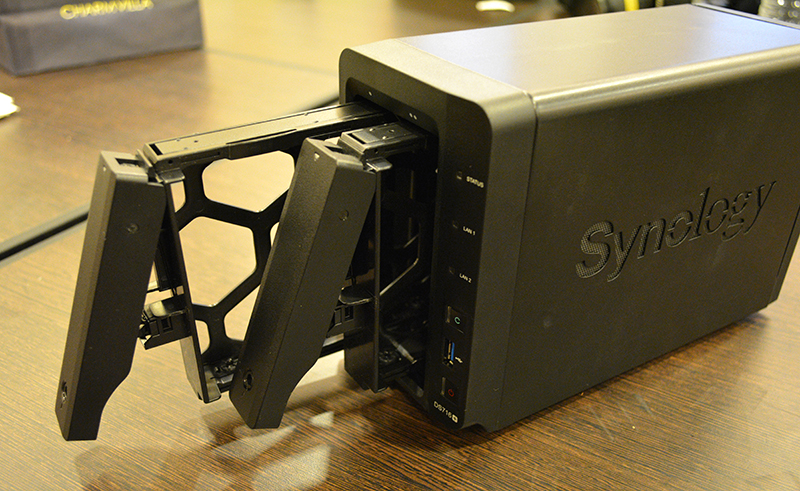 As a member of Synology's Plus series, the DS716+ NAS server is geared toward businesses and power users. You can find its specifications as below:

This is actually the most powerful Braswell CPU available, and the DS716+ also supports 4K video transcoding. Because it supports real-time video transcoding, you'll be able to play 4K videos on devices that don't have the necessary hardware to carry out the transcoding. Furthermore, there's the option to expand it to take up to seven hard drives by connecting Synology's own DX513 expansion unit, allowing it to scale up to meet the needs of SMEs and small businesses.

In addition, Synology is claiming a huge performance improvement in terms of read and write speeds over its predecessor, the DS713+, probably in part thanks to its faster SATA interface (the DS713+ only supports SATA 3Gbps).

We haven't been clued in yet as to how Synology might price this, but it will only be available late in the fourth quarter of this year. 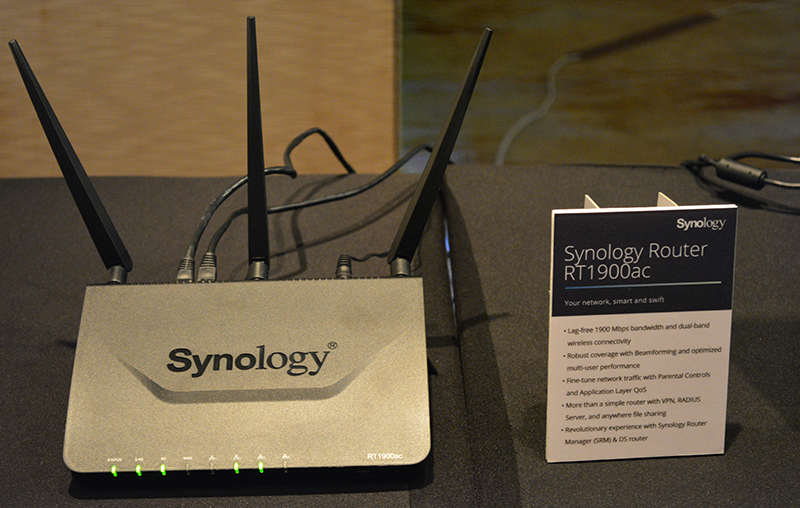 There was also surprising news in the form of Synology’s first ever router. The company talked about branching out from its core NAS business, and the RT1900ac router is its first attempt to do so.

It comes with nifty features like parental controls, advanced QoS capabilities to set restrictions by device and application, and the Package Center, what Synology says is the first ever app market for routers.

There’s also support for mobile apps, so you can tweak the settings from the phone itself. For further details, you can check out our separate article on the router itself. The router is expected to be available sometime in October for around US$150 to US$200 (S$210 to S$280).