Street Photography: One day in Phnom Penh with the Panasonic Lumix GX8 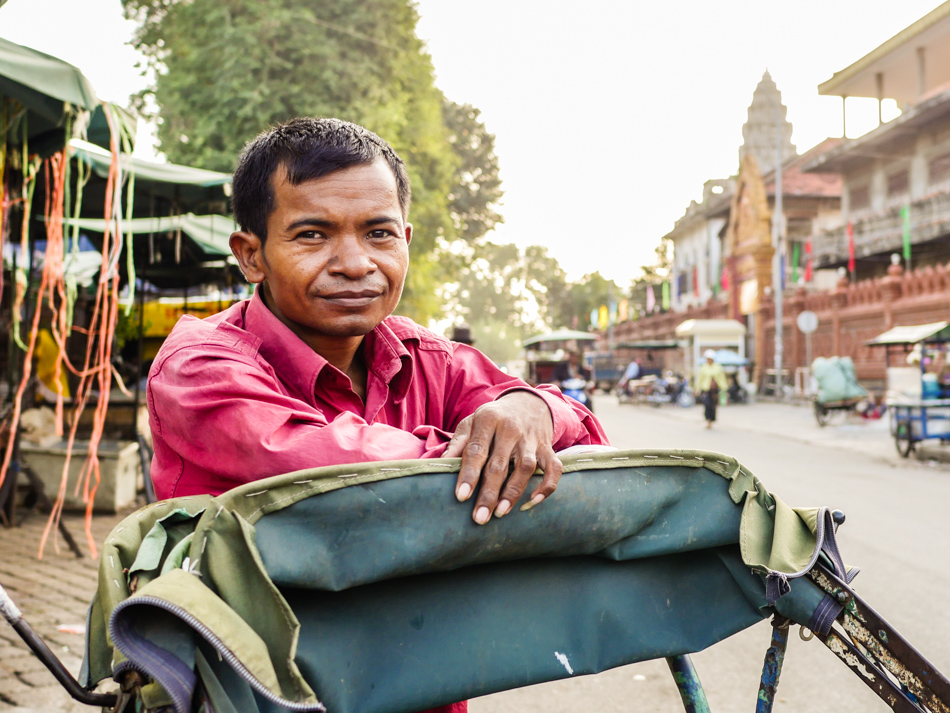 This is a short story about two things. One is a hands-on shooting experience with the new Panasonic Lumix GX8.

The second is catching glimpses of Cambodia, in the capital of Phnom Penh, for one brief day.

Note: These sample photographs were shot in JPEG with the Panasonic Lumix GX8. They have been processed and cropped, click to see the original, full-resolution images. Focal length is given in 35mm equivalent. The images are copyright to SPH Magazines, they are provided for your reference and we ask that you do not reproduce them elsewhere.

Our group started the day early, catching the sunrise along the riverbank. A fisherman had come in, and his family was scaling and selling the fish that had just been caught. His kids were playing along the riverside, doing what kids all over the world do, yelling, fooling around, holding on to mom and dad. 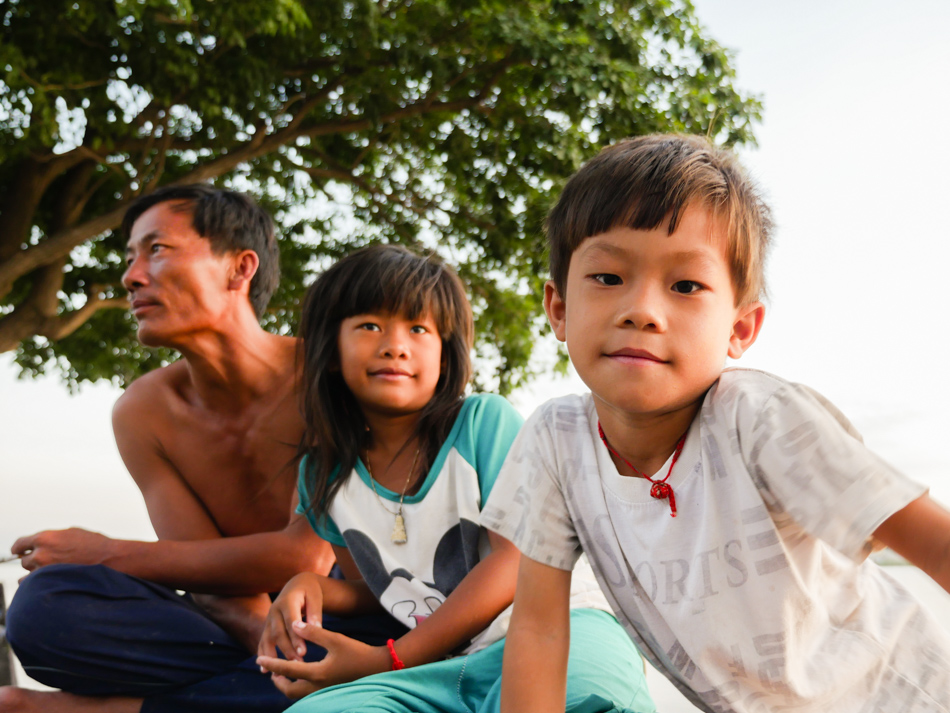 As I sat beside the fisherman, the early morning sun rose and bathed his skin in its warmth, turning his skin into rich, chocolate tones. I’ll never forget the way he smiled at me, letting me photograph him and his children without fear or hostility.

We caught the rest of the morning light in a wet market, rich with the smells of fish, skinned chickens, chopped meat, and fresh vegetables. Motorcycles, overwhelming with produce and meats, squeezed in the narrow lanes together with people. I raised my camera, and still, people smiled at me. 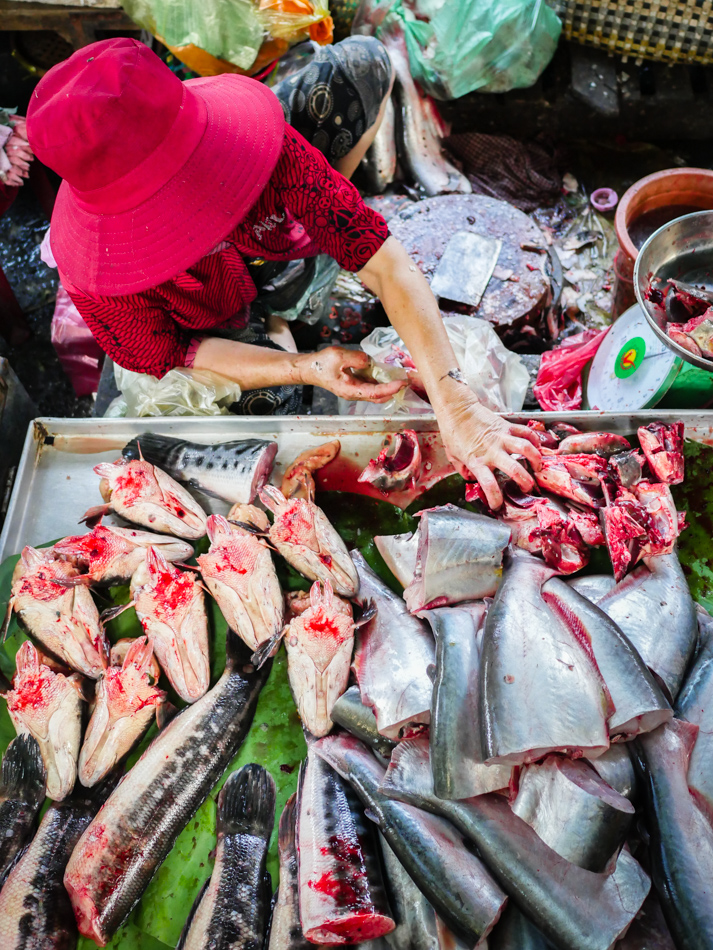 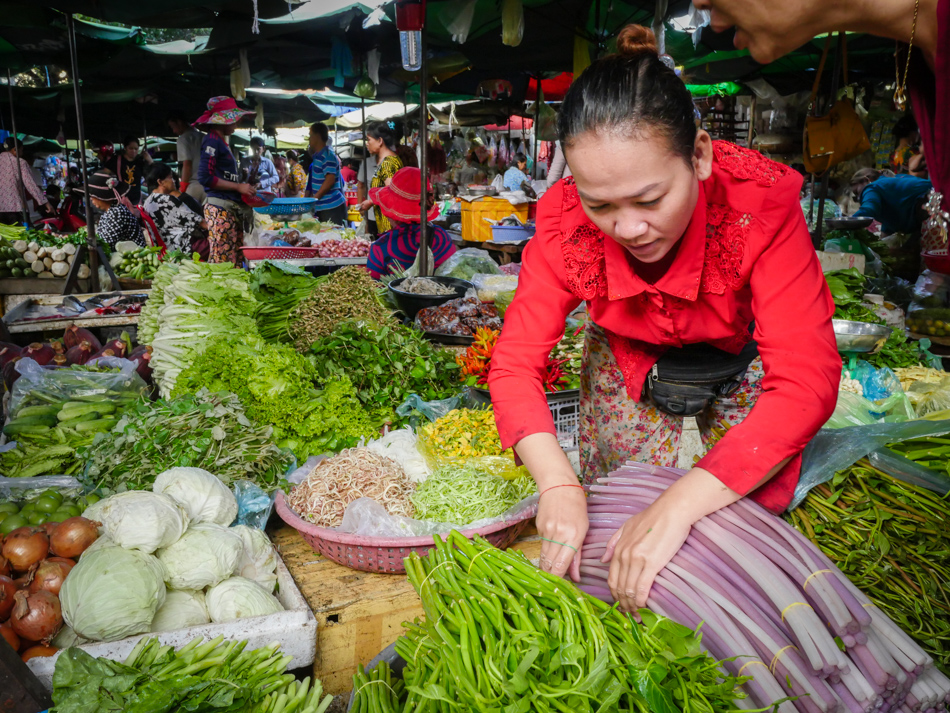 Coming out of the monastery, I managed to catch (I assume) the head monk as he left the temple. I asked if I could take his photo, he nodded, and stopped for two steps in front of me, even though it looked like walking was an effort for him. 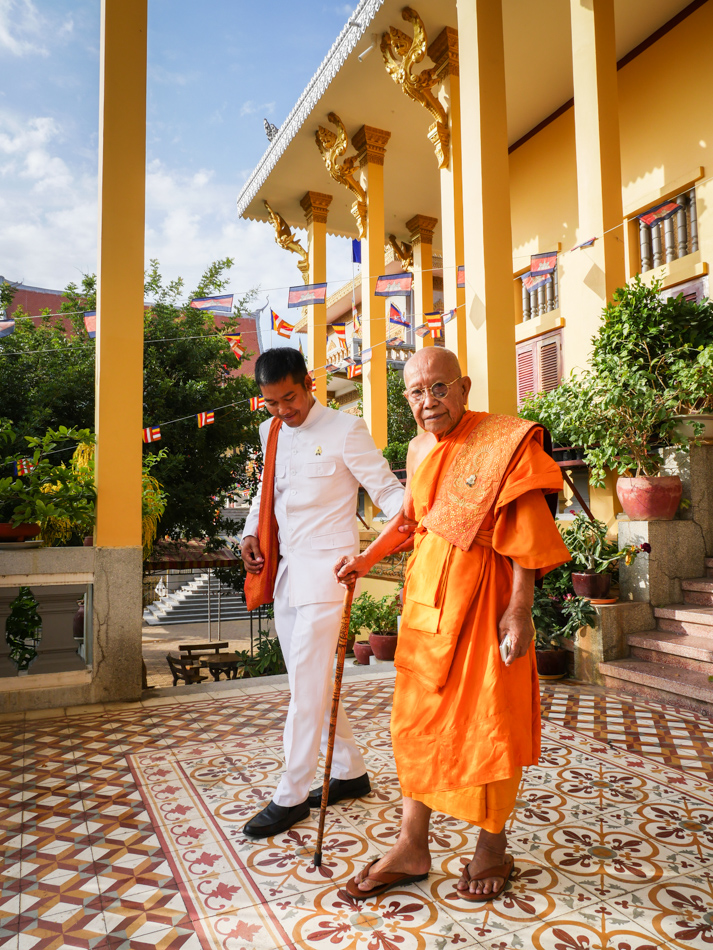 Near sunset, we disembarked right in front of the grand palace, where the setting sun was making amazing light. But it wasn’t my scene. Despite the beauty — and it was beautiful — it wasn’t talking to me. 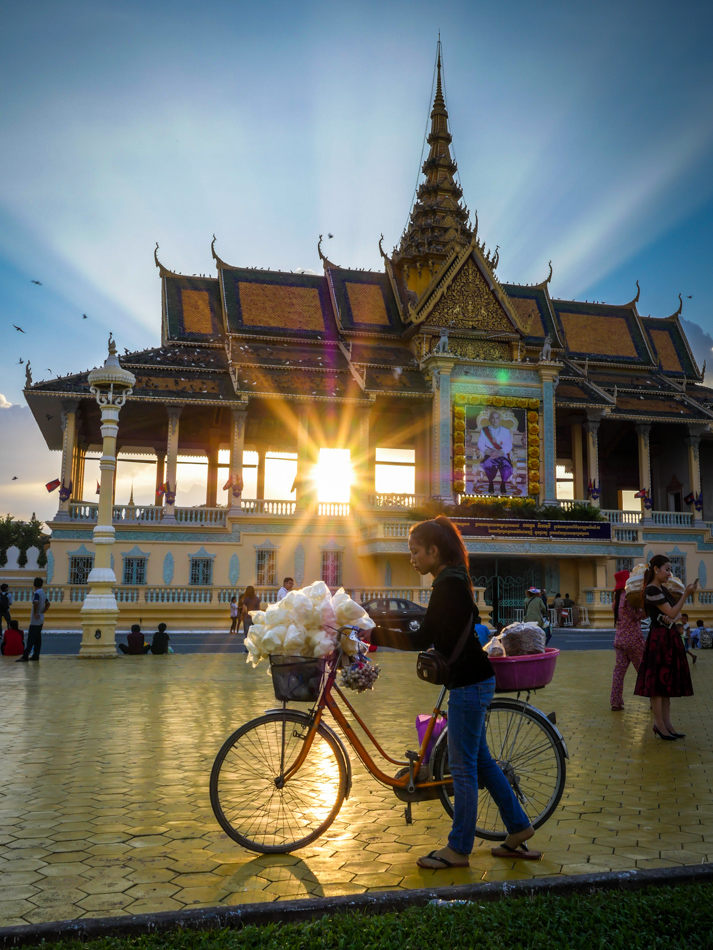 I crossed the road, to a small shrine streaming with people. People lighting up their incense, praying, some with smiles on their faces, many more looking grim. Beggars surrounded the shrine, mixed in with old grandmothers selling offerings, and kids selling caged birds — you could buy one’s freedom for US$2.

A man sat on the ground, on — his waist? I couldn’t tell under the folds of his shirt if he had legs. All I could see were the stumps he had for hands, and how small he was, like the size of two footballs stacked on top of each other. I couldn’t take his picture.

He reminded me of people I’d seen in Vietnam, who looked like they had been victims of Agent Orange during the war. Impossibly small bodies below adult faces, with limbs that didn’t look like they belonged.

I wasn’t sure if I could handle it. There was a story here, but what was it? I sat on the steps, and slowed down to see. To breath it all in and allow the place to unfold itself before me.

People often talk about photography as learning to see. They’re right. Not enough talk, I think, about learning to feel. Because if you cannot feel before you take a photograph, nobody can feel anything when they look at your photograph. 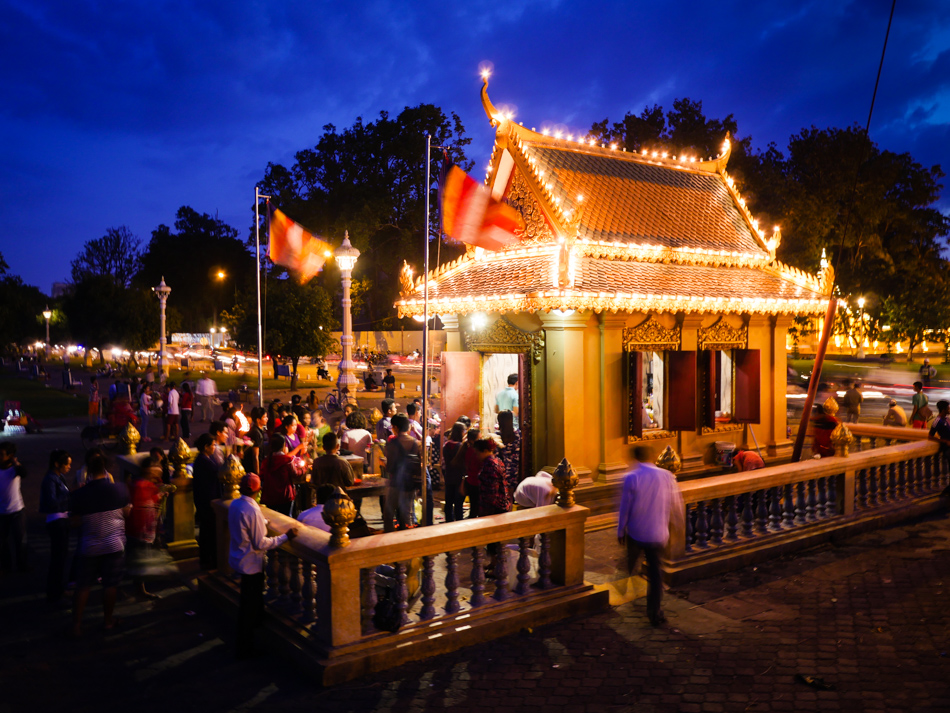 The shrine, for me, was it. The story of the looks on people’s faces as they brought their hopes and despair to the gods. The story of orange against blue, as the sun set and the lights came on. The story of movement, as people streamed in and out of the shrine, and the traffic streamed past in the background. 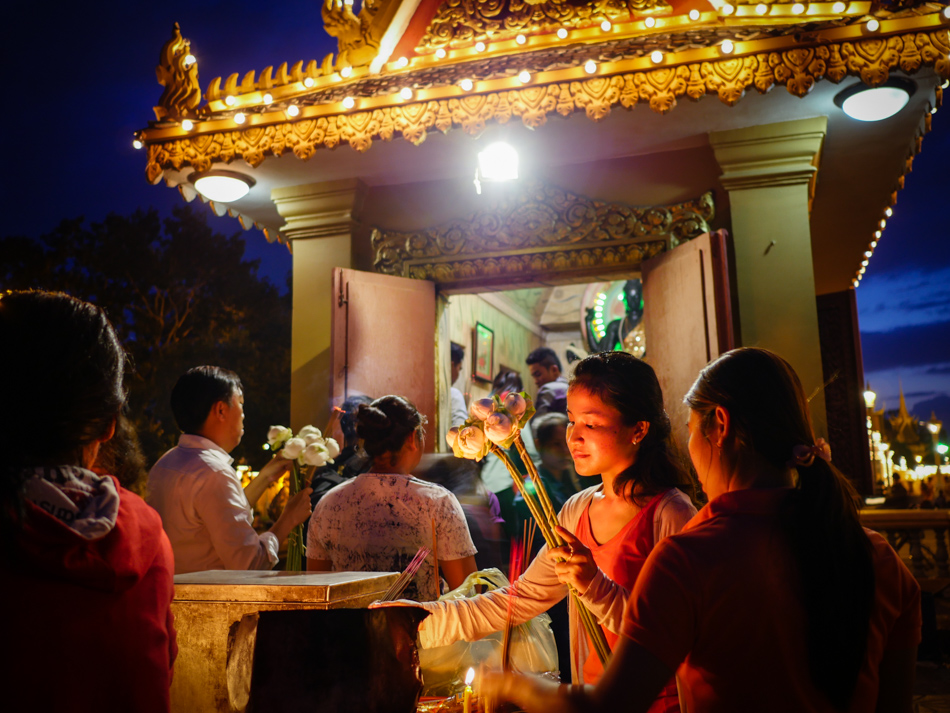 My last picture of the day came just before we left. I saw this child eating right beside the busy road. For one moment, he was caught in the headlights of a passing car. 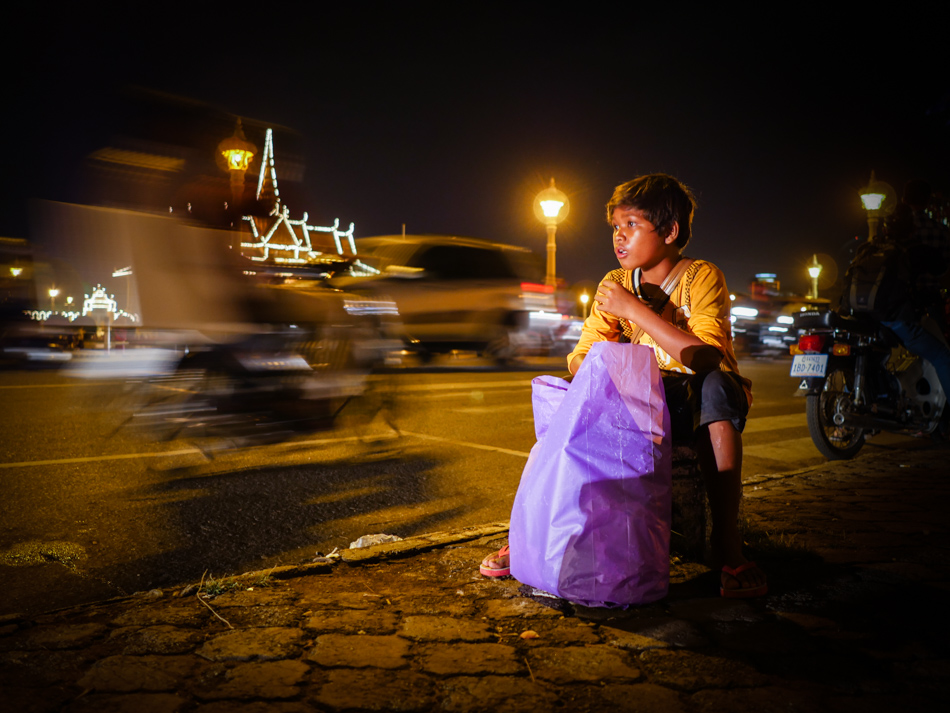 People told me how much they’d seen the country change in just a few years, and how fast it is still changing. What does the future hold for this child, and all the others like him in Cambodia? I don’t know, but I hope it welcomes them warmly, like the people of Phnom Penh welcomed me for one brief day.