Now that the elaboration about the new features and design of the products is out of the way, we can start to take a look at the individual models themselves.

The Direction of 4K

The Sony X9004A series of 4K TVs was unveiled at CES 2013. Available in 65-inch and 55-inch iterations, the model is still some way short of Sony’s 84-inch 4K Ultra HD (UHD) TV. But the smaller screen size seems to be part of a concerted effort on Sony’s part to bring 4K to the masses. After all, the 84-inch UHD TV from Sony is rather large and costs a whopping S$36,000, making it out of reach to most home owners. 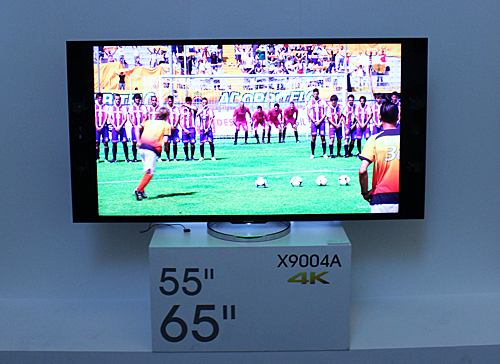 While local pricing for the X9004A models have not been made known yet, the 65-inch 4K TV has a price tag of US$6,999 and the smaller 55-inch model will costs US$4,999 in the US. With the lower price points and more manageable screen sizes, Sony is hoping that more deep-pocketed home owners opt to go the 4K route.

The rest of the new Bravia line-up for this year consists of a number of LED-backlit LCD TVs that support a varying number of new features mentioned in the prior page and have full HD resolution panels. To easily compare which models sport certain features, here's a table detailing the capabilities and characteristics of the different models at a glance.

To summarize, the Sony W954A is the flagship model and features all the latest design, picture, sound and usability technologies. At the other end, the R550A comes with older display technology but is meant to be an affordable option for those willing to compromise for a massive TV residing in their living room. Meanwhile, the Sony W804A is billed as an entry-level 3D TV and the W704A is targeted at users who don't mind skipping 3D functionality but would like to at least have Smart TV features.

Pricing for all the models are not yet available, but you can expect the TVs to be in shops by July 2013. We'll update this space in the near future when prices are made available.