At an event held today at the ArtScience Museum, Sony unveiled their new line-up of Bravia televisions. The location was apt as the new products feature a revamped design and a host of new technological innovations all aimed at improving performance as well as making the user experience more convenient. The new range of products includes the Sony 4K TV showcased at this year’s CES as well as a number of LED-backlit LCD contenders which boast different user propositions and varying screen sizes. Sony was keen to point out the main areas of upgrade for the new series of TVs are design, picture, sound and usability. In this article, we'll walk you through each of these aspects and the new features that debut with them.

Sony themselves have classified the new range of televisions as "The Most Beautiful Bravia Ever". The old Monolithic style, Bunchin and easel stands have been discarded. These have been replaced with the new ethos titled "Sense of Quartz", which has three strong identifying characteristics. Firstly, a lining has been placed around the edges and it shines bluish green, thus framing the display in an understated way.

Secondly, the older stands have been switched out in favor of a new circular design. While rotating Bravia TVs was not possible with the Bunchin stand, you can do so now with the new Sense of Quartz design. In our opinion, the circular stand helps the new televisions look less blocky and also gives the products a more modern feel. Lastly, the Sony logo at the bottom of the panel stands out on its own and is lit differently depending on the usage of the TV. The lighting is unobtrusive and slight, but if it is not to your liking it can be switched off to avoid distractions.

Sony has always paid great heed to picture quality and their new TVs seek to improve on the standards set previously. To achieve this, Sony brought back the "Triluminos" screen technology as well as introducing a new engine in the form of the X-Reality Pro / 4K X-Reality Pro.

Triluminos RGB LED technology was part of the Sony XBR8 TVs but was discarded in 2009 due to its prohibitive costs. With the new range of TVs, Sony is bringing back the Triluminos display which has been enhanced with Quantum Dots technology when compared with previous versions. To understand the benefits of Triluminos technology, it is first necessary to comprehend how regular TVs operate. An ordinary LED backlit LCD TV uses white light passed through red, green and blue filters to represent the image it has been tasked with rendering. The quality of the color displayed is essentially as good as the filter being used.

The Sony televisions armed with Triluminos screens however use a blue LED packed with green and red quantum dots (a technology pioneered by QD Vision). When quantum dots are engaged with electricity, they emit light at their own intrinsic wavelengths. This light, combined with the blue LED are used to paint the picture which the television displays. This process is more exact when compared with the usage of filters employed by regular TV models.

Sony claimed that Triluminos technology also gives their new Bravia TVs a wider color gamut, which they demonstrated quite effectively by pitting an older Sony Bravia HX855 (which is one of the best screens from last year) against the new W954A. From first impressions at the event, the range of color displayed was definitely superior but we also found the display of the W954A to be a bit on the softer side. We will be able to pass more detailed judgement once we get hold of a Triluminos equipped TV from Sony in our labs for a more thorough examination.

Please note that Triluminos display technology is not included for every new Bravia model. We've got the full feature and product matrix to check against on the following page.

The X-Reality Pro Engine (4K X-Reality Pro Engine for the 84-inch X9000 and the X9004A 4K TVs) is what powers the images. The technology is not really new and was also part of the previous range of Bravia TVs. Essentially the X-Reality Pro is a dual-chip digital video processor while the older X-Reality was a single chip solution. Both of these processing engines were first introduced in 2011, but there have since been minor updates and improvements to keep up with times. 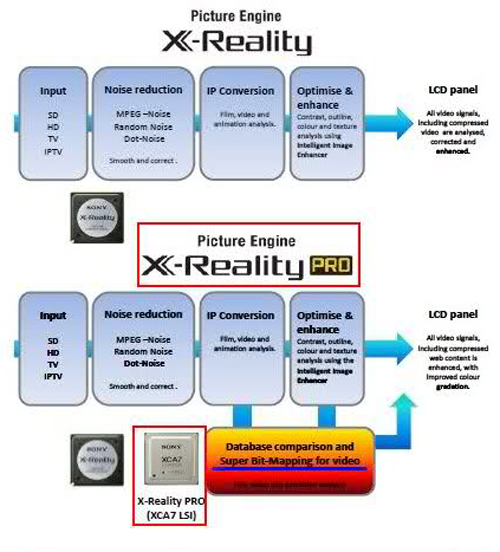 The X-Reality Pro engine works with all sources, be it HD or SD, and its job is to improve content playback. Features such as multi-frame analysis help it to create missing resolution, while Sony’s Super Bit Mapping provides 14-bit upscaling. The 4K X-Reality Pro is capable of providing 4K upscaling in addition to the regular capabilities of the X-Reality Pro Engine.

The audio subsystem is an aspect of the TV which most manufacturers tend to overlook. However, to ensure that their high end models offer a truly premium experience, Sony has worked hard to ensure the sound from these sets is top notch. They have accomplished this via new processing technology and improved hardware, a combination they have termed Signal-to-Sound architecture. 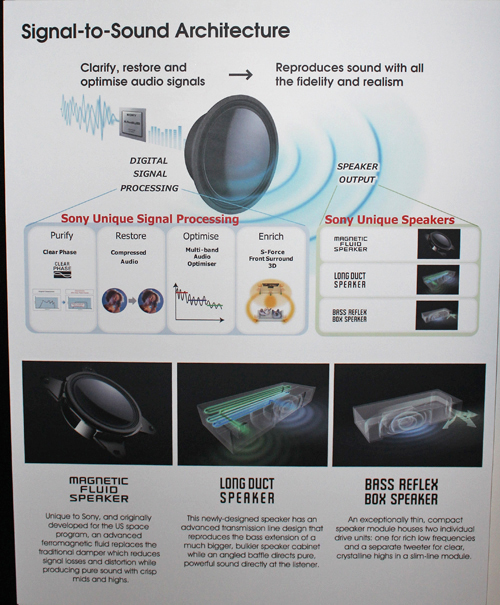 As can be seen in the visual above, the new audio setup includes a DSP as well as three different variations of speakers for greater clarity and a wider soundstage. Sony has utilized magnetic fluid, first developed by NASA, to keep the profile of the speakers small in order not to add any additional bulk to the televisions. At present, the magnetic fluid speakers are available with the Sony 4K TVs and selected models of their new home theater systems. 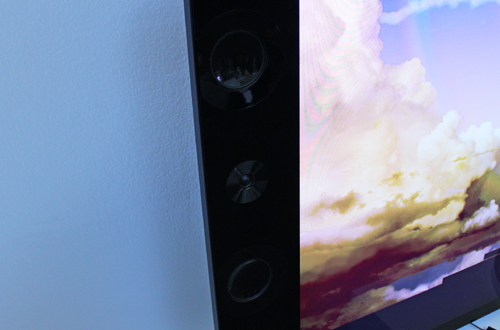 It goes without saying that the new Bravia TVs also come with a whole range of modern connectivity options such as MHL and Wi-Fi Direct. But the ones we would like to highlight are "One Touch mirroring" and the TV SideView app. 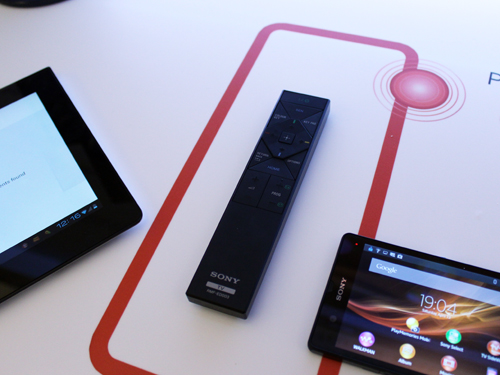 The remote for the new Bravia comes with built-in NFC capabilities which can be used to pair with your NFC-compliant Xperia smartphone or tablet (other Android or iOS tablets and smartphones are unable to avail this feature) . With one simple touch, your entire phone is mirrored on your television. After this you can play games, view photos, watch videos, send messages and access applications on your phone and all your actions will be displayed on your TV's large screen. 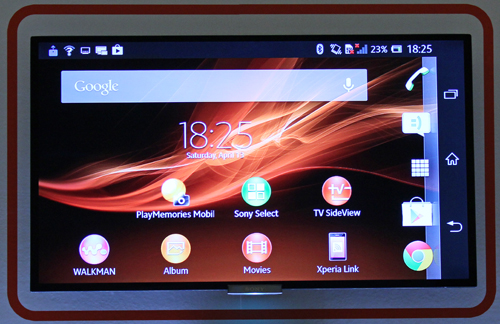 The TV SideView app, available for Android and iOS, is an application which seeks to include the “second screen” in your TV viewing experience. Besides having pertinent information displayed on your tablet or smartphone, the app also serves as a universal remote for Sony products. Performing actions such as searching for content via the TV SideView app also keeps your TV free to continue displaying the content you were already viewing.

All the new Bravia TVs, except for the R550A, are DVB-T2 integrated making the new Sony televisions ready for the future. DVB-T2 is a digital format which can support broadcast for both SDTV and HDTV content. You can read up more on DVB-T2 from our coverage of BroadcastAsia 2012.