Samsung reportedly increasing component prices by up to 20%
Event Coverage

Sony is a company that’s had the misfortune of being stuck in the mud for the past couple of years, content to ride on past successes and the strength of the brand name alone, and unfortunately in the process, let the competition pass them by. Current Sony CEO, Kazuo Hirai, has big plans for bringing Sony back to its former brilliance with his “One Sony” vision. Hirai believes that the key to Sony’s recovery lies in strengthening the company’s core businesses (digital imaging, gaming and mobile), and turning around its TV business.

And the challenge in turning Sony’s TV business around for the better lies with 4K. Where Sony is concerned however, they are literally in prime position to push 4K all the way from the “lens to the living room”. They make professional cameras that can record in 4K resolution. They have products that help production houses edit and create 4K content. They have a movie studio in Sony Pictures, to create and master their own 4K content (Sony Pictures also has a large selection of movies mastered in 4K). They have projectors in cinemas, and now TVs for the home, that let users enjoy 4K content.

In short, Sony is in the unique position of being able to stick their thumbs into just about every part of the 4K movement, and if they play their cards right, they have the opportunity to define where 4K heads to in the future. 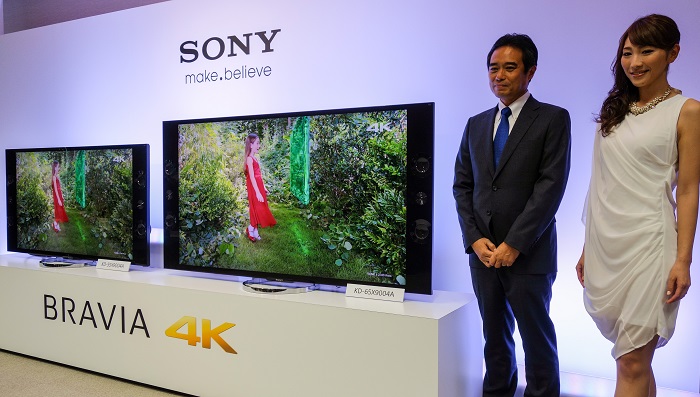 Earlier in Tokyo (Tuesday, 7th August), Sony introduced a pair of 4K LED TVs to the Singapore market in the form of the 65-inch and 55-inch displays to the KD-9004A Series lineup. Oddly enough, these new LED 4K TVs were already available for sale in Singapore as of July 12th this year. The 55-inch variant (KD-55X9004A) is available at a suggested retail price of S$6,999 (more information here), while the 65-inch variant (KD-65X9004A) is available at S$9,999 (more information here).

Sony is currently the only TV maker to offer 4K-ready TVs in sizes smaller than 84 inches, though the competition isn’t far behind with competing offerings due soon. Even more interesting: Both 55- and 65-inch 4K TVs do feature passive 3D functionality, but as far as Sony is concerned, 3D seems more an afterthought as the focus of the launch gambit hovered more around image quality.

There is also a larger 84-inch offering from Sony, the KD-84X9000, though this model had already been introduced earlier back in 2012 (and reviewed here). 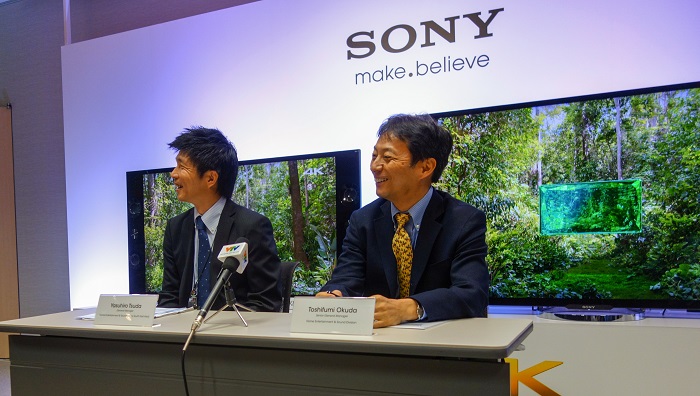 Q: Where will consumers find content for their 4K TVs?
A: We don’t want people to misunderstand that 4K TVs work only with 4K content. Any content you see today can be up-converted with the X-Reality Pro engine. Yes, we’ve been working behind the scenes to make native 4K content available more easily, but we want customers to enjoy everything they have today on their 4K TVs. (Ed: Sony has the 4K Ultra HD media player, available in the United States, that comes pre-loaded with 10 movies in 4K resolution, with more on the way for rental or purchase. Unfortunately, it’s not coming to Singapore just yet.)

Q: Where does Sony see 4K going in the future?
A: Large screens have become increasingly popular in recent months. As screen size gets bigger, the limits of 2K resolution becomes apparent, especially when you move towards larger panels. For example, the 100-inch plasma (from a competitor) looks very dull, and not to mention that the pixels are easily noticeable even on Full HD resolution. 4K technology addresses all that. Talking about smaller screen sizes, there are also questions as to why Sony isn’t pursuing 4K TVs that are 42 or 32-inches in size. At the moment we don’t see good applications for smaller screen sizes. At the same time, mobile device resolutions are higher and higher; high density is the name of the game. And once you’ve been spoiled by what you see on mobile, you won’t want dull images on your home TV.

Q: What would be the ideal price premium difference between 2K and 4K TVs, and when do you see the gap narrowing?
A: Our 4K strategy is going to be for the mass market. That’s the goal. We admit it’s not going to be easy to make affordable 4K TVs for everyone from the get go. But we’re working hard to bring prices down to be more accessible to every customer. From a business perspective, Imamura-san (Ed: That would be Masashi Imamura, President for Sony’s Home Entertainment & Sound Business Group) mentioned the worldwide growth in unit numbers for the TV market, but in reality, the industry is struggling as price competition is very fierce. We see innovation as being a key driver to turning the TV industry around.

Q: What would be the advantages of Sony’s 4K offerings versus the competition?
A: Our Triluminos technology is a key advantage. Admittedly, there are a lot of cheap 4K TVs today, but with obviously debatable image quality. Great sound is another advantage; when we first developed our 84-inch 4K TV, the immense size of the screen meant that audio from the built-in speakers had to come from below. In our newer and smaller 4K TVs, we’ve managed to go back to front-oriented speakers, and thanks to Magnetic Fluid Speaker technology, we have the best sound when compared with the competition.

Q: With 3D, content was always a big question in the minds of the consumer. Will content make or break the 4K movement?
A: When it comes to 3D, there are two narratives. The first is that 3D has been very good for the movie industry, as movie theatres love the 3D business. In that sense, 3D has been a success. On the other hand, 3D broadcasts to the home remain a challenge. Then there are the glasses, which can be a huge stumbling block; whether active or passive, you still need to wear the glasses to properly view 3D content. Yes, there are glasses-less 3D solutions available, but those types of displays aren’t ready for the mass market just yet.

4K on the other hand, is different. For one, you don’t need glasses. While we do think that the broadcast industry should really move forward with 4K, whether streaming or terrestrial, we do agree that it takes time to really get into 4K proper; we believe that 4K content will come. And ultimately, we’re confident that the hard lessons learned from 3D won’t be repeated with 4K.

Q: Is there a concerted effort from Sony to work with other production houses, including the grassroots video industry, on the 4K format?
A: Using a 4K-capable camera, and producing native 4K content are two different things. The 4K production workflow needs new understanding and learning on how to best use it to create new content. This isn’t just limited to Sony either, as it’s more of an industry issue.

We do need to work on distribution. If you have a 4K TV, how do we get the content to you? Optical fibre? Satellite? We’ll need to collaborate with broadcast partners in all countries to get 4K content to more people.

By doing so, Sony is actually in a position to spearhead the 4K movement, and that gives us an advantage over the competition, instead of putting us in the position of playing catch-up. In that sense, our content distribution strategy would be critical to Sony’s success in this space.