Samsung reportedly increasing component prices by up to 20%
Event Coverage

Not to be left out of the Windows 8 touchscreen 'convertible' Ultrabook bandwagon, Sony today unveiled its Vaio Duo 11, an 11-inch, full HD, touchscreen Ultrabook with a unique sliding form factor that lets it easily switch between tablet and notebook mode. 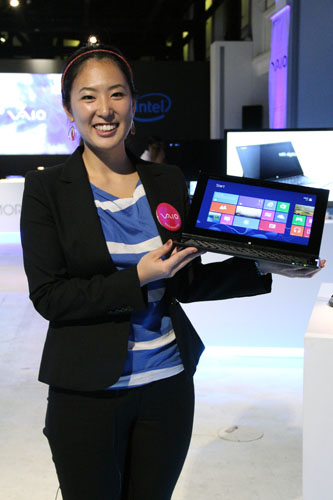 At first glance the Duo 11 appears to be a regular 11-inch tablet. However, pulling upwards on a thin ridge at the back (which is much like the ridge found on many notebook lids) activates its 'Surf Slider' mechanism which lets the screen slide up and back, revealing that it is actually a full featured Ultrabook. The Duo 11 measures 320 x 199 x 17.85mm and weighs 1.3kg, which is fairly slim and light for a touchscreen Ultrabook (the touchscreen panel actually adds quite a lot of weight and thickness as noted in our Samsung Series 5 Ultra Touch review). 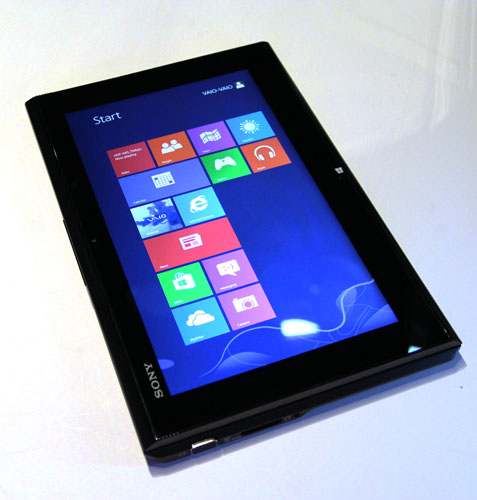 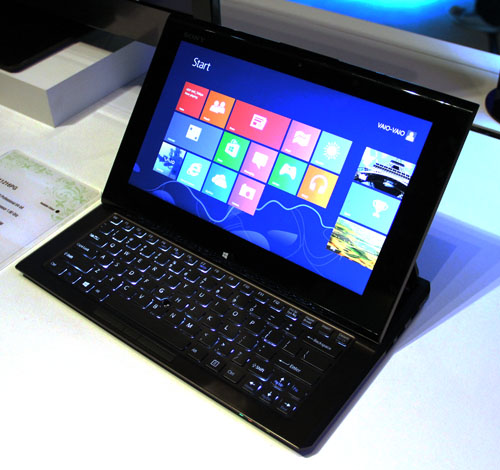 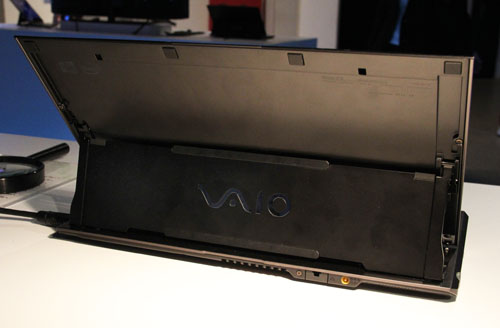 Sony developed the Duo 11 for business users, and while there are tablets out there that can be used for business by combining a separate keyboard when required, we found this model to be far from ideal, as you never know exactly when you might need your keyboard, so you might not have it with you. With the Duo 11, the keyboard is always there and you can switch between tablet and notebook mode at any time.

Secondly, we found that other 'convertible' notebook designs such as those that fold fully back or twist on a hinge require at least two actions to convert between tablet and notebook. With the Duo 11, the transformation can be done with one simple action.

When we tried sliding the Duo 11 we found it a bit tricky at first, due to a desire to slide the screen backwards, however Hashimoto pointed out that it's more of an upwards action, and we were then able to get the hang of it. In practice it's actually very similar to opening and closing the lid of a regular notebook, only done from the back instead of the front of the device.

The 'Surf Slider' mechanism isn't exactly automatic, but the rails it slides on are very smooth and once the screen gets moving, its weight will slide it easily into place. Compared to other 'convertible' notebook designs such as those with removable keyboards (e.g. Samsung's Ativ Smart PC) and those that fold fully back (as seen on Lenovo's IdeaPad Yoga and Samsung's Series 5 Ultra Convertible), the 'Surf Slider' is definitely the most seamless transition, however, it does have its own drawbacks, such as how the screen is always exposed, and how much space the sliding mechanism takes up, which has resulted in the removal of the wristrest and trackpad. 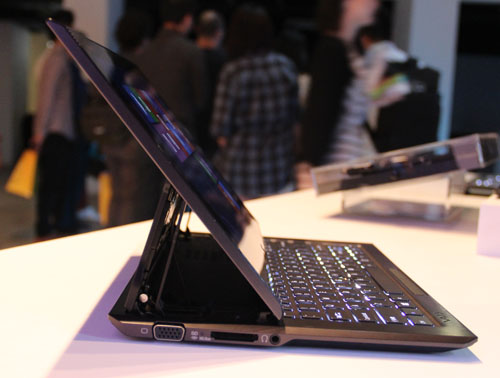 Without a doubt, one of the highlights of the Duo 11 is its gorgeous full HD 1920 x 1080 resolution IPS touchscreen. Not only is the resolution fantastic, it's also both very bright and also boasts quite decent viewing angles. Touchscreen response was also excellent, and it had no problem accurately tracking multiple inputs at the same time. One concern we had was that with no lid to protect the screen, it could easily be damaged. Hashimoto however showed us a video of Sony's stress testing process, of which one test involves repeatedly dropping a weight onto the screen to stress test it against damage. Sony hasn't announced anything officially, but the display does appear to be Corning Gorilla Glass, and as such should be able to take quite a pounding. One drawback is that, as with most Gorilla Glass screens, it's very glossy and also quite the fingerprint magnet. 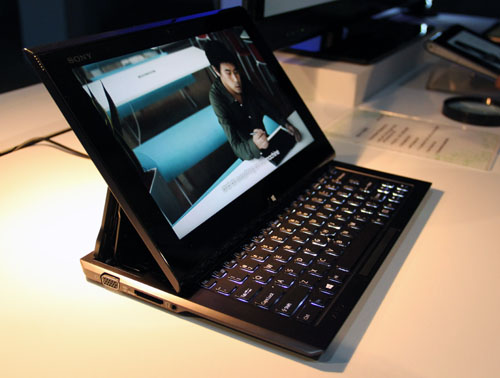 The Duo 11 uses a full-sized chiclet style backlit keyboard. The keyboard itself feels quite good and the keys are nice and firm. However, due to the space taken up by the sliding mechanism, there's no space for a wristrest, which makes typing a bit awkward. Additionally, since there's no wristrest, the trackpad has also been removed and replaced instead with a Lenovo-style track point nub - although with the touchscreen interface, this seems slightly redundant. 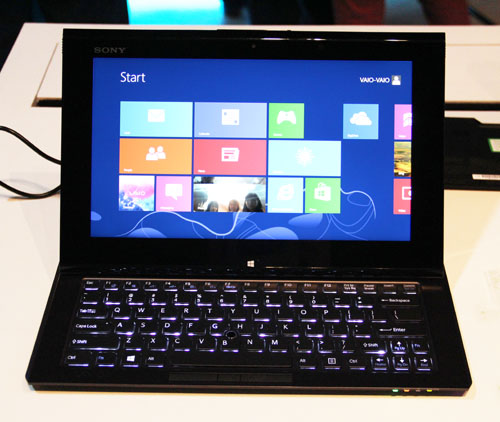 To fully take advantage of the touchscreen panel, Sony has developed a new stylus technology for the Duo 11 called the Digitiser Stylus.  The stylus has been designed so that writing on the tablet feels more natural and akin to writing on paper with a pen or pencil. Both i5 and i7 versions of the Duo 11 will ship with the stylus, however, in what seems like a major oversight, the Duo 11 doesn't actually have a slot to store the stylus. An extended battery pack will be available which does have a stylus slot, but this will be sold separately. The stylus itself has buttons for right and left click and is powered by one AAAA battery which supposedly has a battery life of about one and a half years. It also has a switchable tip, for your preference of either a hard or soft feel.

To complement the stylus, Sony is bundling the Duo 11 with a number of apps designed to be used with it. 'Note Anytime' works like most of the other hand writing recognition apps out there and allows you to write directly onto the tablet and have it be converted into a regular document. One interesting app is 'Active Clip', that lets you use the stylus to select an object in an image and easily cut it out of the background for use in Photoshop or other image programs. Handily, you can also write the name of a program or app directly into Windows 8's search bar, and the Duo 11 will be able to find it.

In a diagram Hashimoto showed of the Duo 11's screen construction, the touch sensitive panel appears to have been placed far closer to the display than with other touchscreen devices. This seems to results in a much more accurate response, as there's less distance between where you touch and where the screen actually registers. 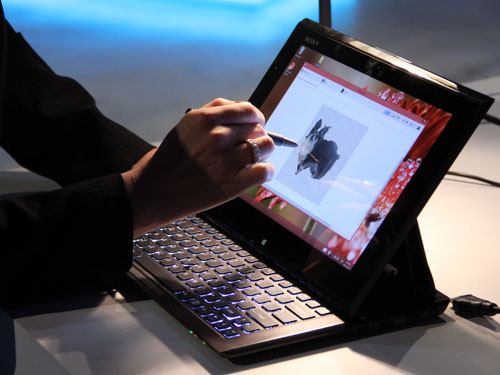 Connectivity-wise, the Duo 11 is very impressive with Sony managing to squeeze in just about every port you would need on a device.

Overall, we were quite impressed with the Duo 11. Its powerful hardware and connectivity options make it very versatile, and it works well in both tablet and notebook forms. Its full HD IPS touchscreen is just the icing on the cake. Overall build quality is decent although we were disappointed to see that the base is constructed of plastic - having said that, it does feel sturdy. Inside, the interior is constructed from one piece brushed aluminum which looks and feels quite premium. The build quality of the hinge sliding mechanism feels very solid and we didn't notice any wiggle room or looseness. It seems mostly constructed from metal and Hashimoto assured us that the mechanism is stress tested for over thousands of repeated usage. All Duo 11 units are made in Japan.

If there's one drawback to the Duo 11, it's the price tag. As mentioned by Hashimoto, the Duo 11 is aimed squarely at enterprise users and as such packs a hefty pricetag of S$1,999 for the Intel Core i5-3317U model, which comes with 4GB RAM and a 128GB SSD, and a whopping S$2,699 for the i7-3517U variant which comes with 8GB RAM and a 256GB SSD (although both models are still a lot more affordable than the S$3999 Vaio Z series). Both models will be available in Singapore in early November. We inquired about the possibility of a 13-inch model, to which Hashimoto replied that it's possible, but as of now, Sony will wait to see how the Duo 11 performs.