Sony's 84-inch Bravia KD-84X9000 made its initial rounds during IFA 2012 recently, and as you can imagine, the giant screen was one of the main highlights for the Japanese CE firm with regards to their home theater line-up for 2012. Unveiled earlier today at the rather lavish "V for Shenton" showroom, the 4K 3D TV is now officially part of Sony's TV portfolio here on our humble island. The X9000 also marks Sony's first 84-inch model for its Bravia line of television sets. However, stocks will only arrive sometime in early 2013. Also note that the X9000 will only be available at selected Sony stores and authorized distributors, such as Courts and Best Denki, so don't head out to snag one just as yet. Moving on, will Sony's Ultra High-Definition set astound us? How will it perform with upscaled HD materials? Without further ado, here are more pictures as well as our first impressions of the KD-84X9000 for your viewing pleasure. 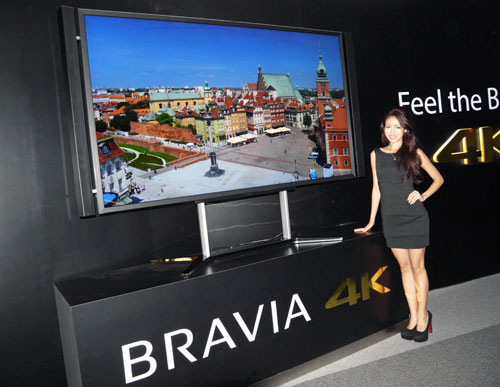 In a few words, this TV is impressive, both in form and function. But before we get to its performance, here are some of our observations of the X9000's design and AV connectivity it offers. Sony has stuck to a simple and no-nonsense formula for the X9000's aesthetics, but thankfully, this did not diminish the set's overall classy form factor. The 84-inch panel is framed by a matte black bezel, supported by an elevated metallic stand which offers decent stability for the huge screen. Sony is also bundling a shorter stand with the X9000 (see picture below). Connectivity wise, the AV ports are distributed between the side-facing and rear-facing panels behind the screen. A total of four HDMI, two composite, and a single component inlet (shared with composite input) are available. This model also touts the digital DVB-T2 tuner, which makes the X9000 a step ahead of existing Full-HD models fitted mostly with DVB-T tuners. As for its backlight unit, it's a pity Sony did not opt for a full-array (or direct) LED solution with the X9000. Instead, the LCD screen is illuminated by Sony's Dynamic Edge LEDs, with so-called "local dimming" perks. After listening to a couple of audio demos, it is clear that the TV also packs a hefty sonic punch. Sony's 10-unit Live Stereo speaker system is divided into five drivers which flank each side of the display. Bass is augmented by four subwoofers (housed in the same housing as the speakers). Coupled with the TV's built-in Dolby Digital Plus processing, the X9000 not only delivered a warm and amply full delivery, but its spacious soundstage was rather impeccable as well. 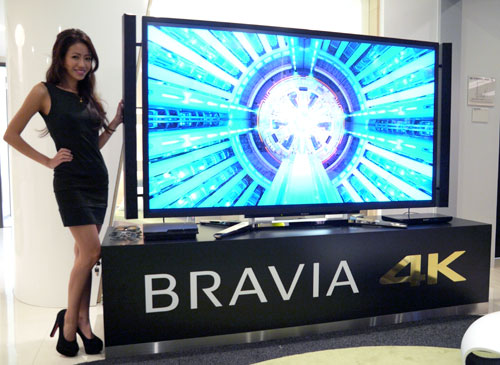 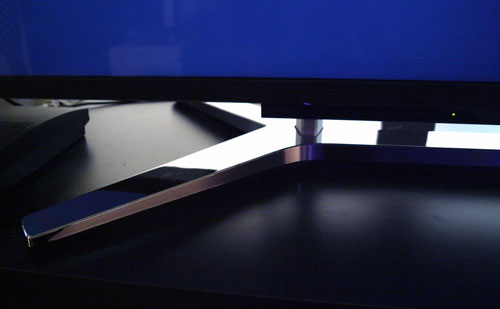 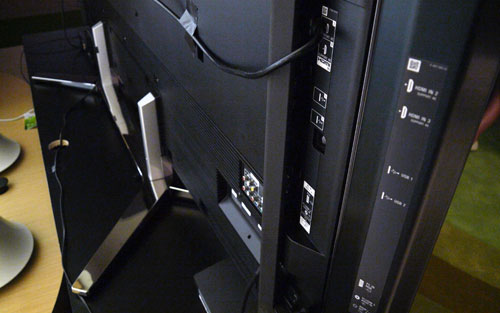 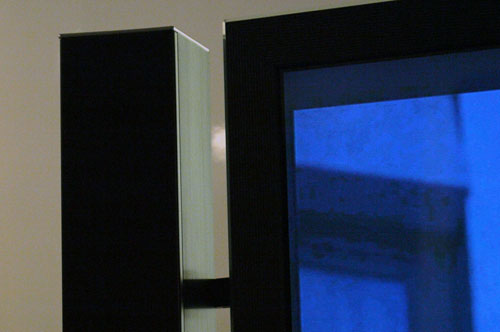 The X9000 will feature a native resolution of 3,840 by 2,160 pixels. Alternatively, you can see it as an equivalent of four times the picture resolution of conventional Full-HD (1,920 by 1,080 pixels) panels. If you are curious about its actual pixel-count, that's approximately eight million individual pixels you are looking at on the 4K screen. Sony's XCA8-4K chip, or video processor, not only refines native 4K content but it is similarly responsible for upscaling duties on the X9000 when coupled with Sony’s 4K X-Reality PRO picture engine. We also understand from Sony that this set and most of its parts are made exclusively in Japan. As for the set's visual acumen, Sony did not demonstrate how standard-definition content like DVDs or standard terrestrial broadcasts would appear on the 4K set. However, its upscaling prowess as shown on the Blu-ray title "Cloudy With a Chance of Meatballs" was nevertheless laudable, considering that the TV was upscaling the HD content by four times approximately. Although the picture quality wasn't as sharp as it would appear on a smaller sized display, there were little traces of scaling and "tearing" artifacts based on what we've witnessed. For an 84-inch panel, we have to admit that the HD source looked admirable on the UHD (Ultra High-Definition) screen. 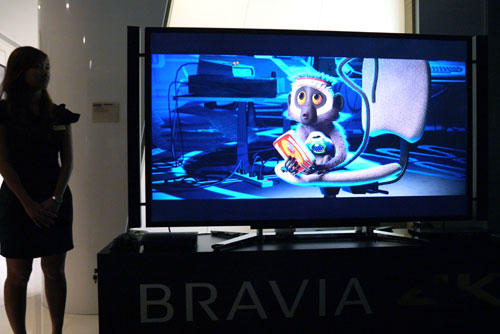 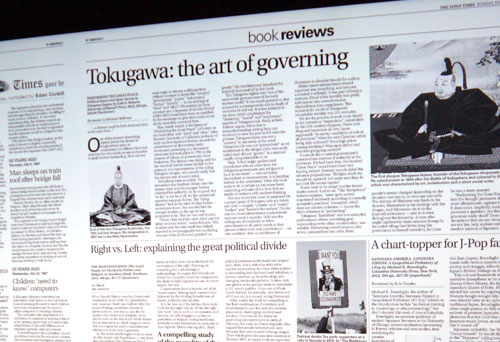 Of course, we were truly blown away when Sony introduced 4K content (shot with Sony's CineAlta F65 4K cameras) on the X9000. The amount of picture resolution this TV is capable of is almost insane. In essence, every minute detail, from tiny cracks on tiles to faint lines on a flower petal are clearly palpable. The X9000 touts a passive 3D screen, much like LG's newly introduced 84-inch UD 3D TV. When questioned, Sony claims it's using a "non Sony proprietary" passive 3D technology, although we have reason to believe that it's mostly LG's FPR (Film Patterned Retarder) tech Sony is wielding, apart from Sony's home-brewed video engine and processors. Anyhow, we detected faint traces of crosstalk during the first 3D demo clip, but the second demonstration ("The Amazing Spiderman" on 3D Blu-ray) was definitely more satisfying with its laudable stereoscopic depths and detail. Like LG's Dual Play, Sony's X9000 will also carry the similar SimulView feature where gamers playing in two-player mode get to view their own screen in full with the aid of polarized glasses. Evidently, we did not perceive any signs of ghosting or traces of the second player's screen on this one, as opposed to our initial observations on the LG Cinema 3D LM9600 model. Immersive is the word. 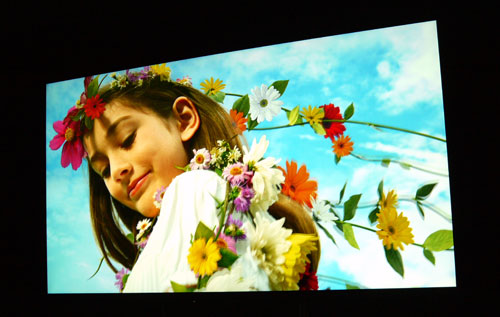 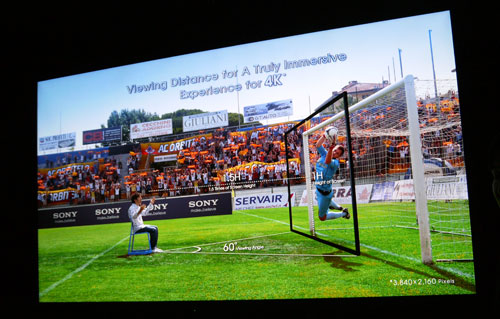 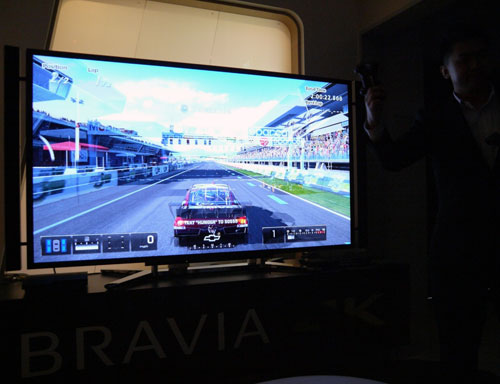 The promotional bundle for the X9000 will include four pairs of polarized glasses (inclusive of two additional pairs), three Blu-ray titles, and a complimentary BDP-S790 3D Blu-ray player. The polarized "Oakley-like" 3D glasses (BKM-30G) and the shorter pedestal stand as mentioned earlier are part of the X9000's stock accessories, meaning you'll get a piece of them even after Sony's initial promo ends. An optional wall-mount bracket (SU-WL500) is available for purchase if required. The KD-84X9000 will retail for S$35,999 at selected Sony stores (such as Sony's flagship store at Wisma Atria) and authorized outlets in early 2013. 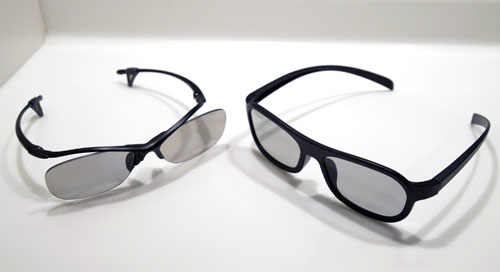