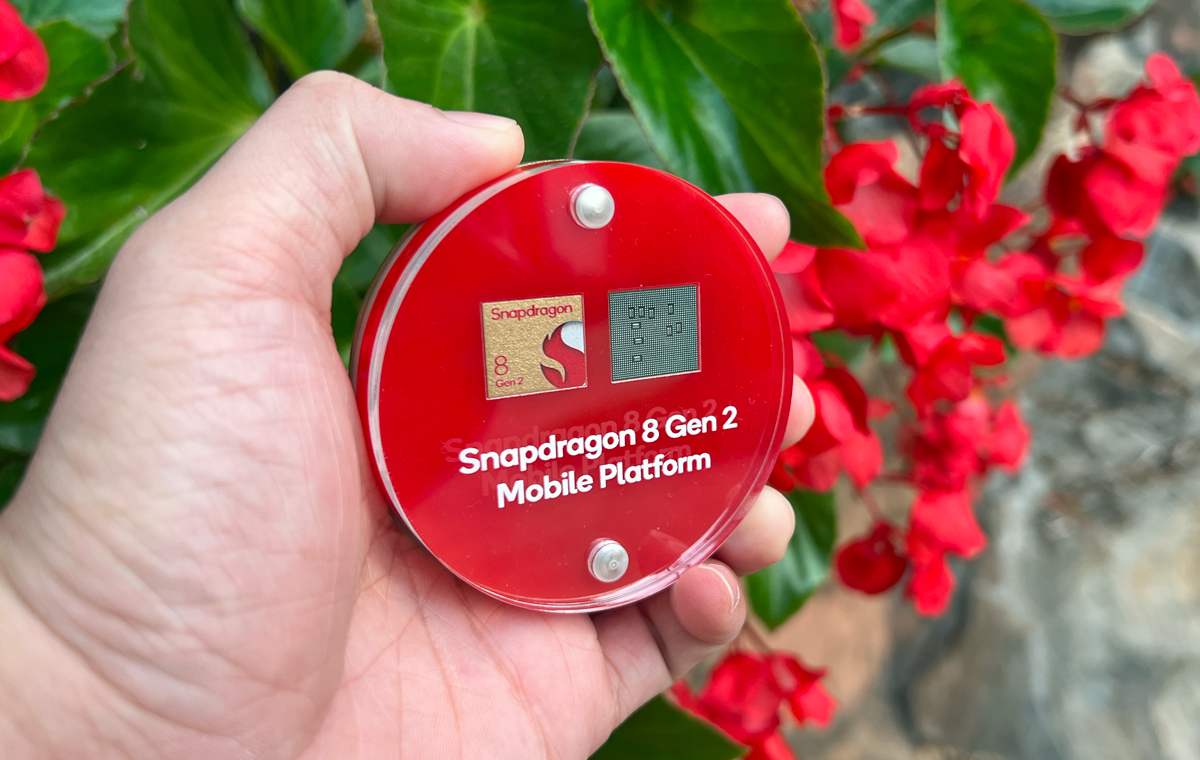 Qualcomm’s Snapdragon 8 Gen 2 isn’t just about getting performance gains, better imaging, and better battery uptime on your favourite Android phones. A crucial part of the experience (and also what makes a phone) is its connectivity options.

The company did a deep dive into the SD8G2’s connectivity options on the last day of its annual Snapdragon Summit in Hawaii, U.S.A., to talk about some of the advances made on the mobile platform, in ways where it directly affects how we use our upcoming premium-grade Android handsets.

SD8G2’s connectivity, and how it works 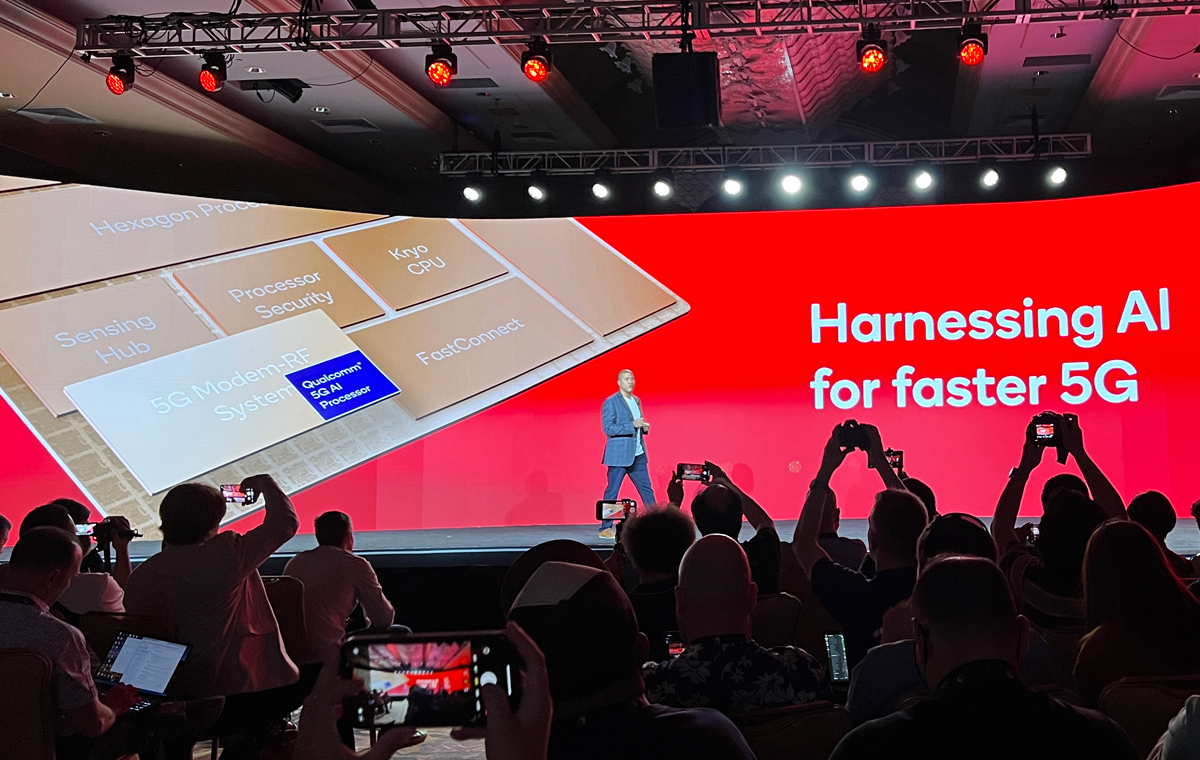 Mobile processors like Qualcomm’s are layered with many components, each with duties of their own to deliver a crucial aspect of mobile phone use. The Snapdragon 8 Gen 2 uses Snapdragon X70 5G Modem-RF System for mobile networks (like 5G compatibility), while the Qualcomm FastConnect 7800 on the chip handles its Wi-Fi and Bluetooth capabilities.

At its launch, Qualcomm touted several connectivity features that are new to smartphones in general. You’ve probably wondered about how artificial intelligence even helps with 5G connections, or its Wi-Fi 7 “with High Band Simultaneous Multi-Link”, or what “Dual Bluetooth” really is. You’d also be wondering how they match the claims of 10Gbps 5G speeds and 5.8Gbps Wi-Fi 7 speeds. Here’s where we look at what a tiny little phone processor can really do, and why these things don’t come cheap.

5G, but with AI helping out 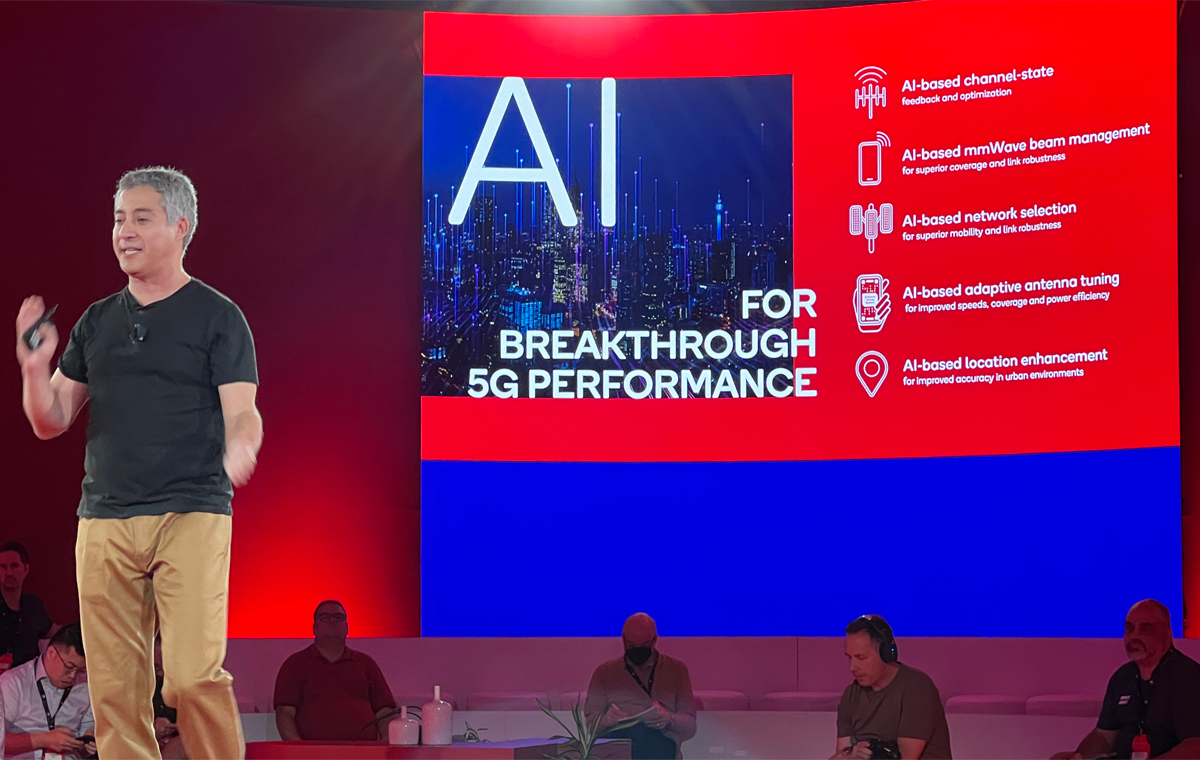 Using the Snapdragon 8 Gen 2’s onboard Hexagon processor for AI workloads has its perks, and one of which is a more robust 5G connection.

Qualcomm said that AI-assisted 5G connections work in five specific ways. The processor (and in turn, the phone it sits on) has AI-based channel-state feedback and optimisation, which is more dynamic than traditional ways of acquiring downlink transmissions. It also uses AI for mmWave beam management, which means it’s AI that decides how 5G mmWave beamforming should happen to grant the most robust connectivity and coverage outcome for your phone.

There’s also AI-based network selection, where AI decides for the user which base station is the best to connect to when you and your phone are out in the wild (a constant problem especially if you’re hanging out in spaces with challenging network conditions, like the underground MRT). Also used is AI-based antenna tuning, which dynamically compensates for interference (like how a person would hold their phone, and other network-affecting environmental factors). Finally, there’s AI-based location enhancement, which helps to improve mobile data accuracy even in dense, populated cities. 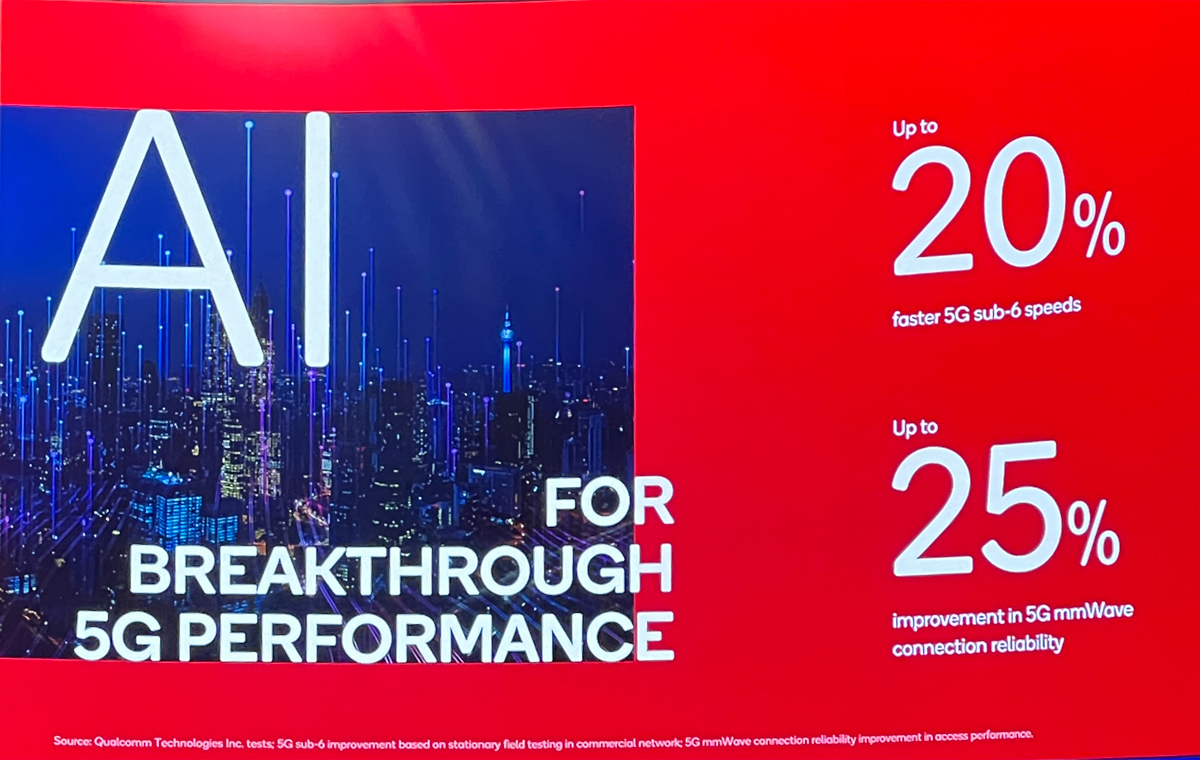 The long and short of it is 5G is fast in ideal conditions, but the additional helping hand from AI adds to network consistency, coverage, and achieving that holy grail of “ideal condition” in your average phone user. Qualcomm claims 20% faster 5G sub-6 speeds by including AI capabilities in 5G networking. 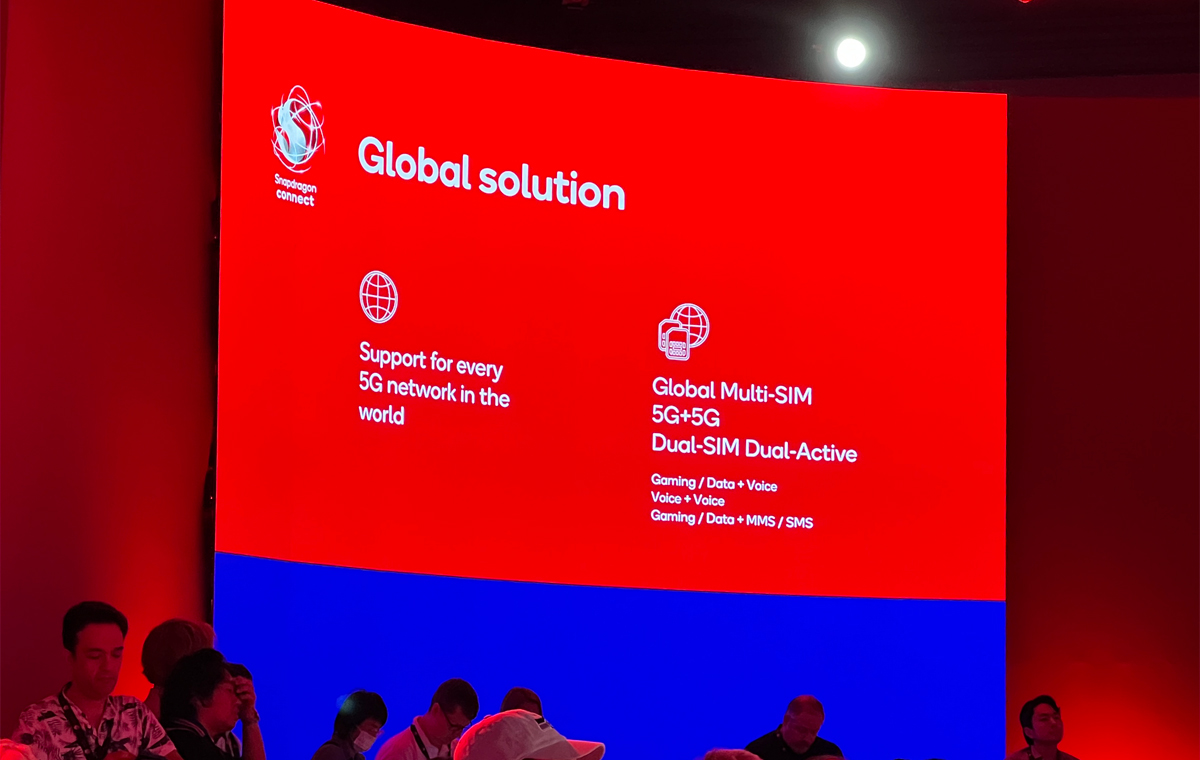 You’d also noticed that Qualcomm said SD8G2 now offers Dual-Active Dual-5G SIM support, but it’s more than just having a phone that can accept two 5G SIM cards in two different slots. The “dual-active” component is what lets users use two streams of 5G connections at the same time. 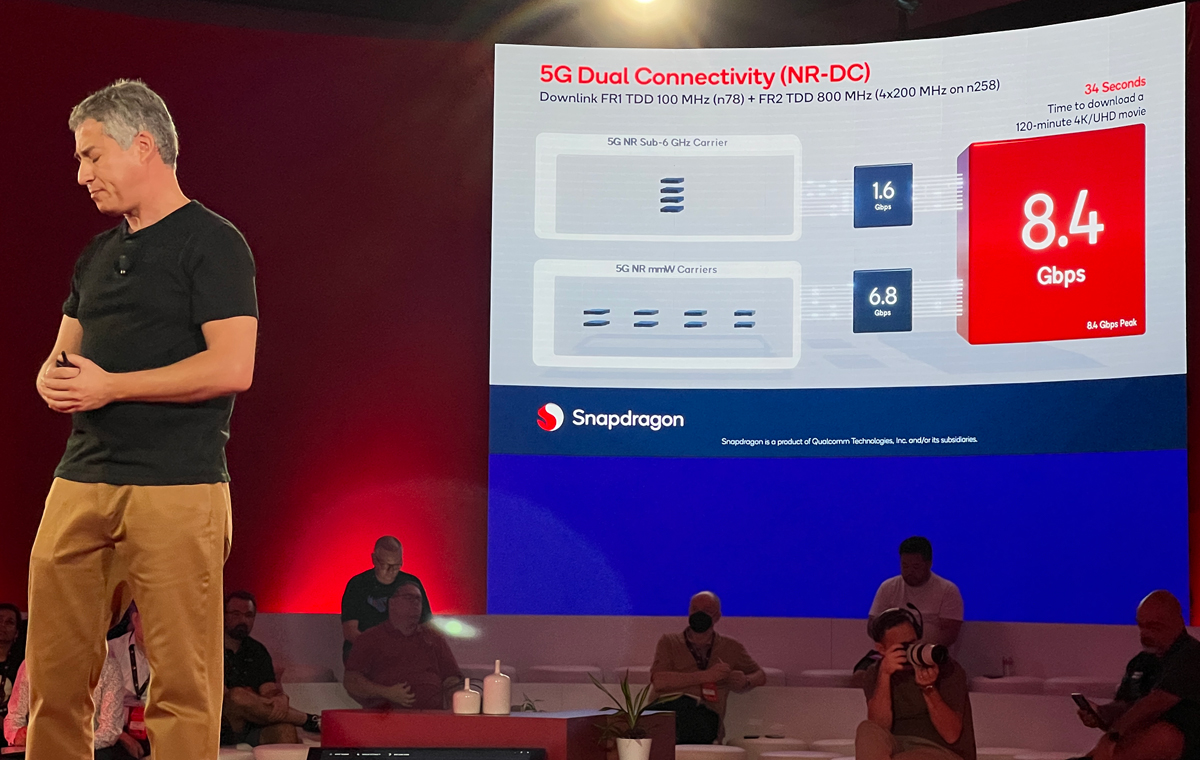 Also, the SD8G2 has 5G New Radio Dual Connectivity (5G NR-DC), which means it can aggregate 5G connectivity on both sub-6GHz and mmWave and combine it to give a higher throughput than either 5G types working alone. 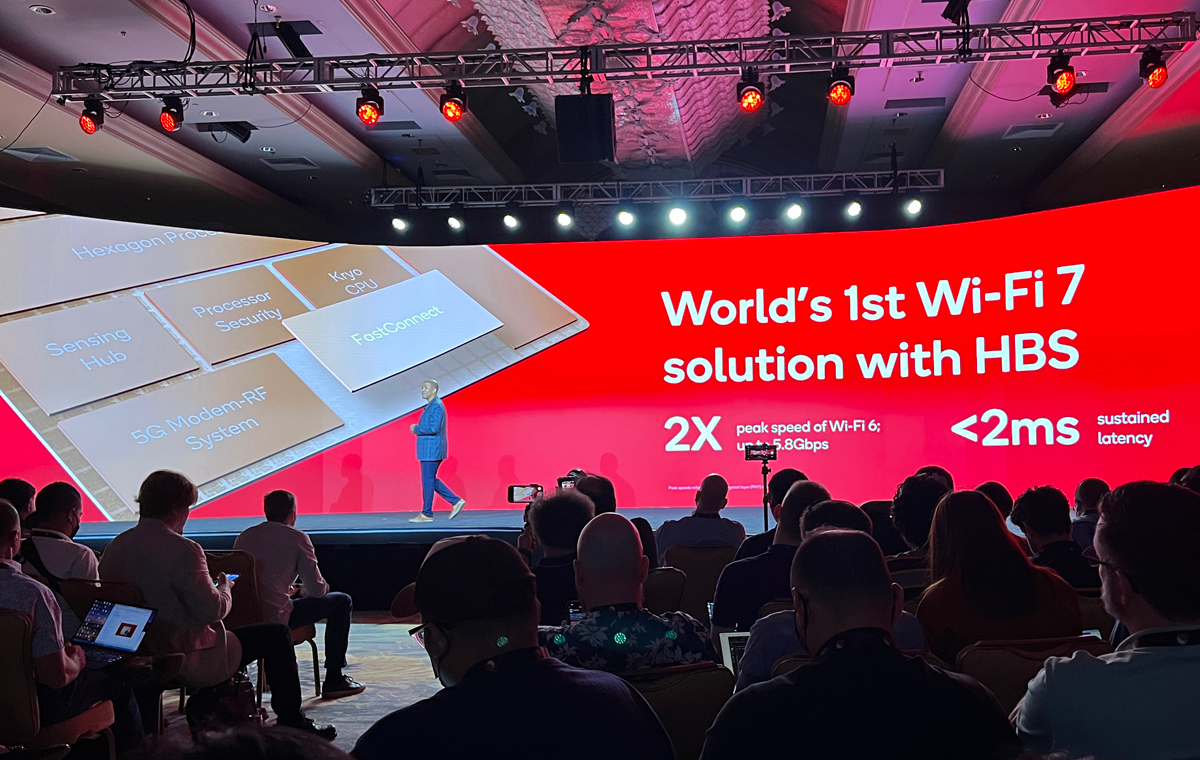 Wi-Fi 7 doesn’t need much introduction, so we’ll keep this simple. Old-school folks might know it as Wi-Fi 802.11be, and it uses the 2.4GHz, 5GHz, and 6GHz frequency bands for transmission (the 6GHz band depends on the country’s band allocation needs, so not all countries have 6GHz open for Wi-Fi 7). 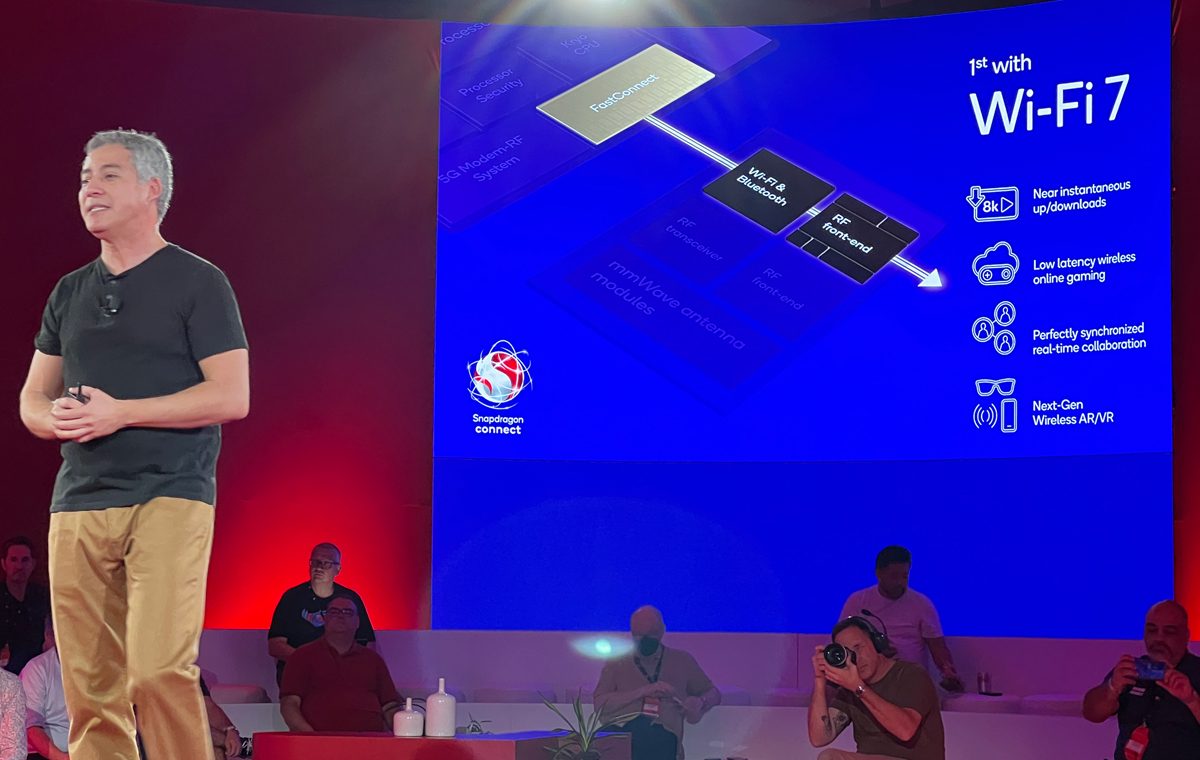 The Wi-Fi Alliance has said Wi-Fi 7 could deliver speeds of 40Gbps when the technology matures. Wi-Fi 6, on the other hand, has max theoretical 9.6Gbps. Right now, Wi-Fi 7 is so new that there’s only one consumer Wi-Fi 7 router in the market – and that router was announced the same week as Snapdragon 8 Gen 2’s public unveiling. 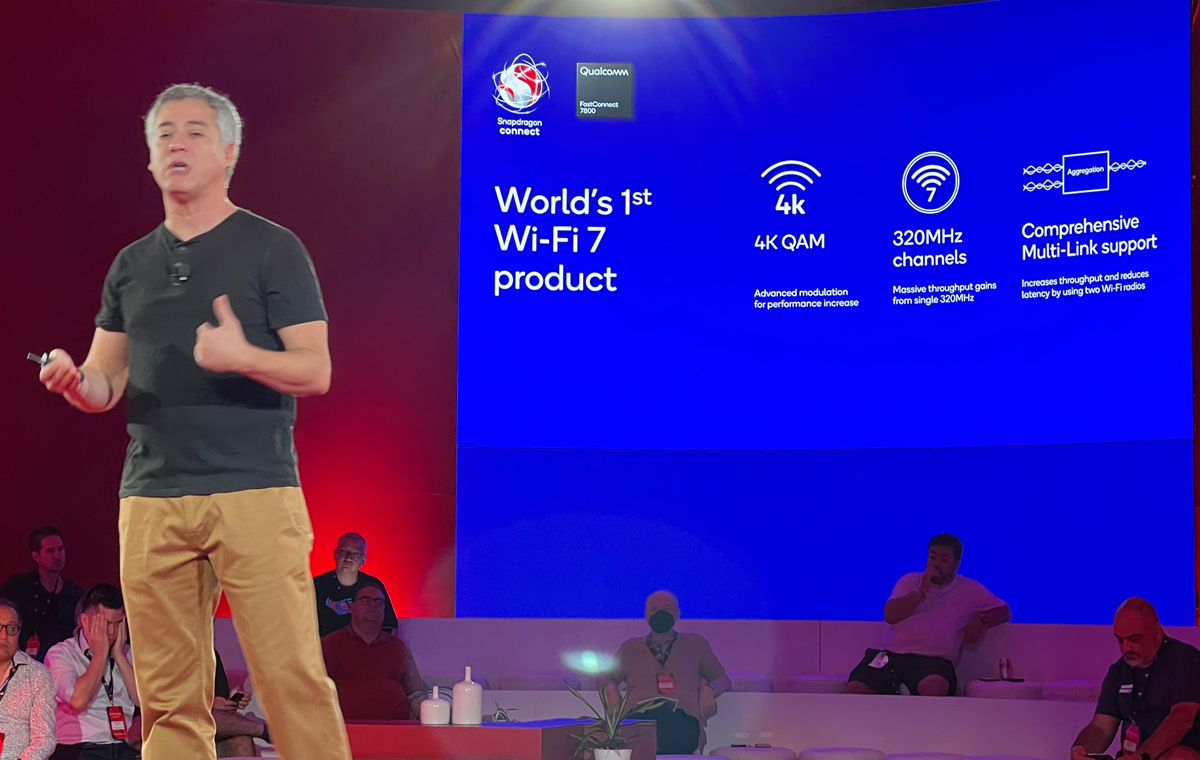 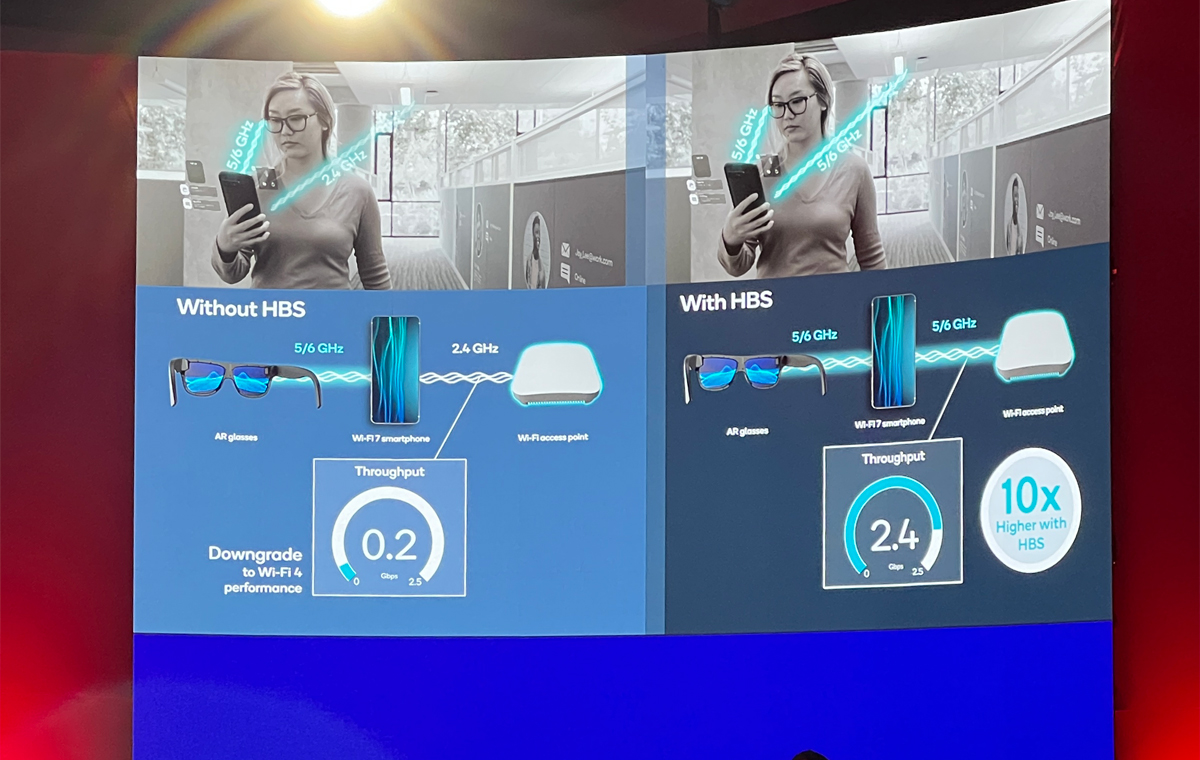 The technique follows the same principles as carrier aggregation for mobile data, and the end result is similar too: you get higher overall speeds. Qualcomm said that its Wi-Fi 7 with HBS nets up to 5.8Gbps, or up to 4.3Gbps for countries that don’t avail 6GHz frequencies for Wi-Fi 7 use. 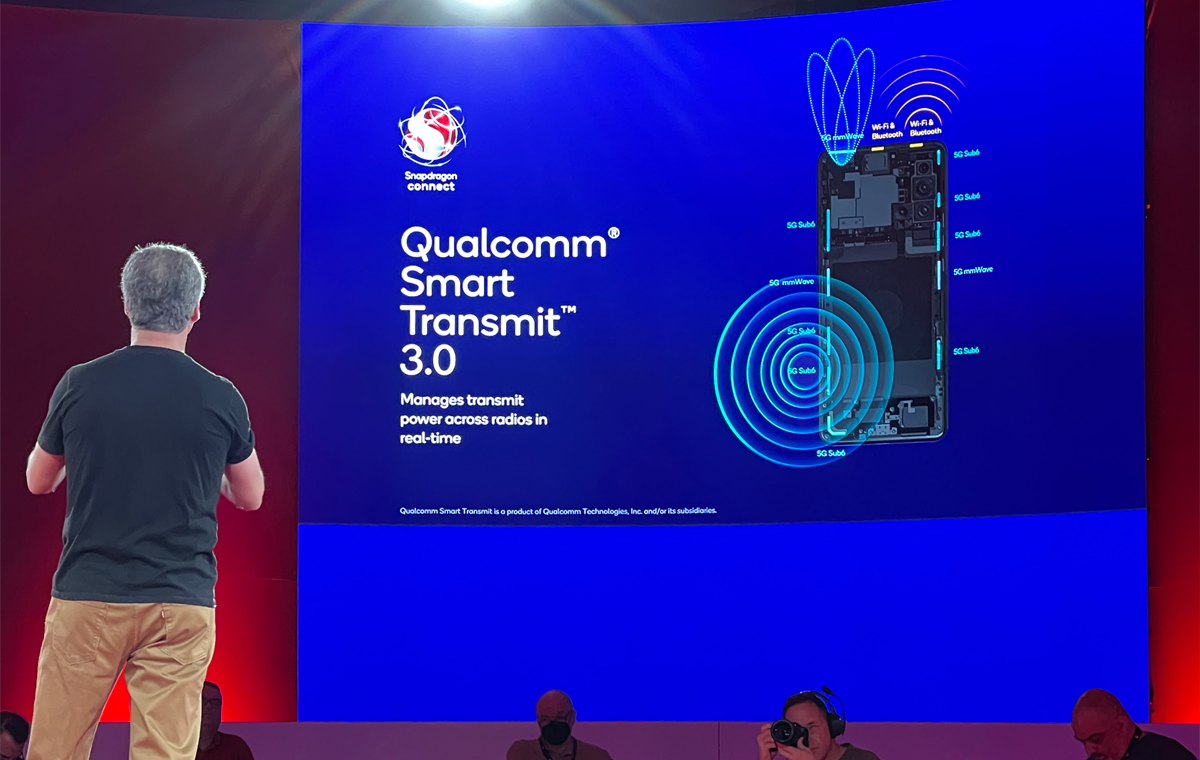 Another perk is Qualcomm Smart Transmit 3.0, where previous versions of this technology only applied to mobile data networks. The current iteration also optimises Wi-Fi and Bluetooth connections, on top of cellular data. 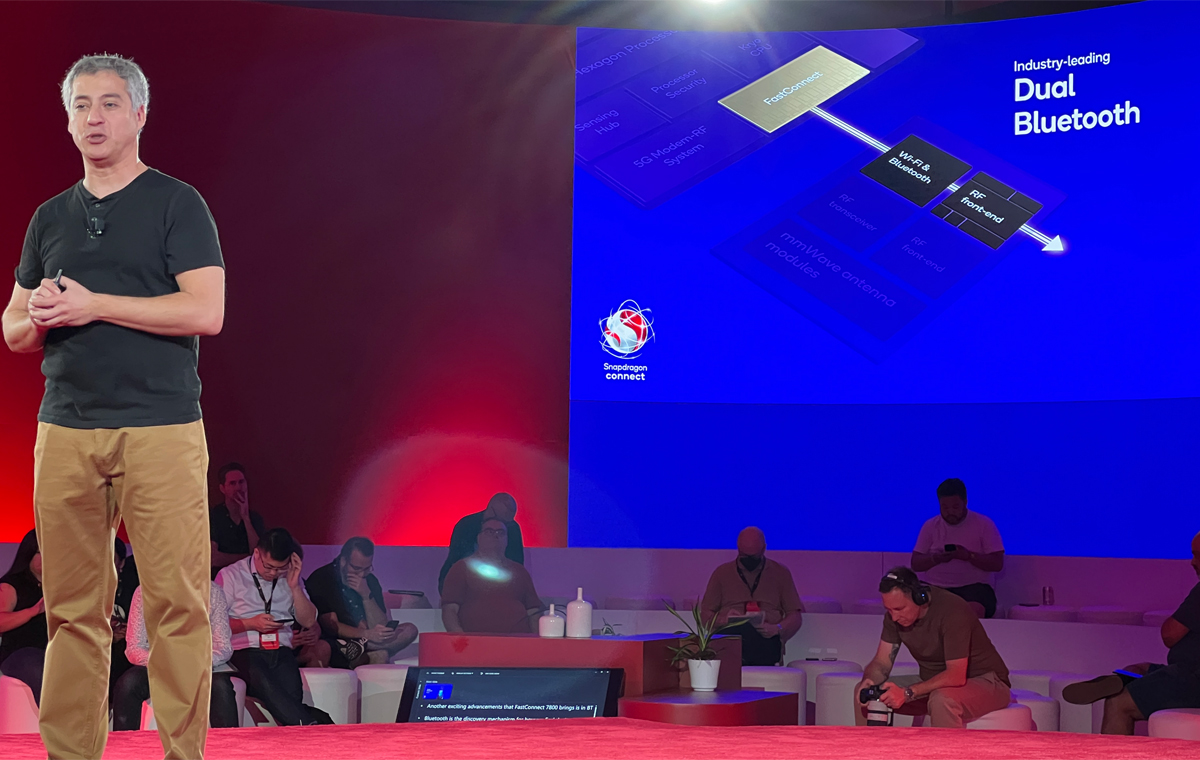 Traditional Bluetooth configurations uses one single stream to send and receive Bluetooth data between your Bluetooth device and your paired host.

Dual Bluetooth is both true in its name and more than just adding an extra stream. By having dual Bluetooth 5.3 connectivity, the host (in this case, an SD8G2 Android phone) can be paired with a Bluetooth device, and still have an antenna free to seek out other Bluetooth devices.

What Dual Bluetooth also offers is the ability to extend the range of your connected Bluetooth devices. Qualcomm said their implementation allows for Bluetooth beamforming techniques, which improves the concentration and reliability of Bluetooth signals and double the peak Bluetooth range (typical BT range is 10m). 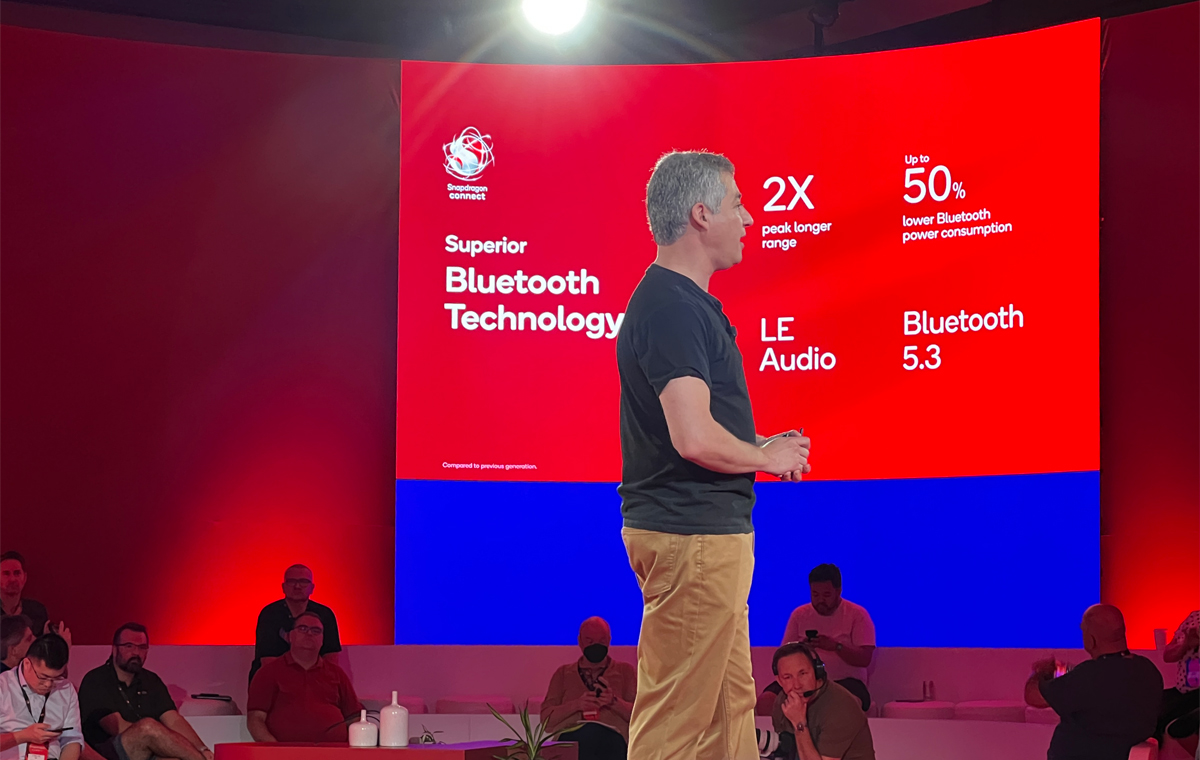 An interesting feature is the “up to 50%” lower power consumption despite doubling the Bluetooth antennas. That’s because a more robust Bluetooth connection means less effort and power drained to reacquire a strong connection, and that’s also in spite of having two antennas sucking up battery juice. 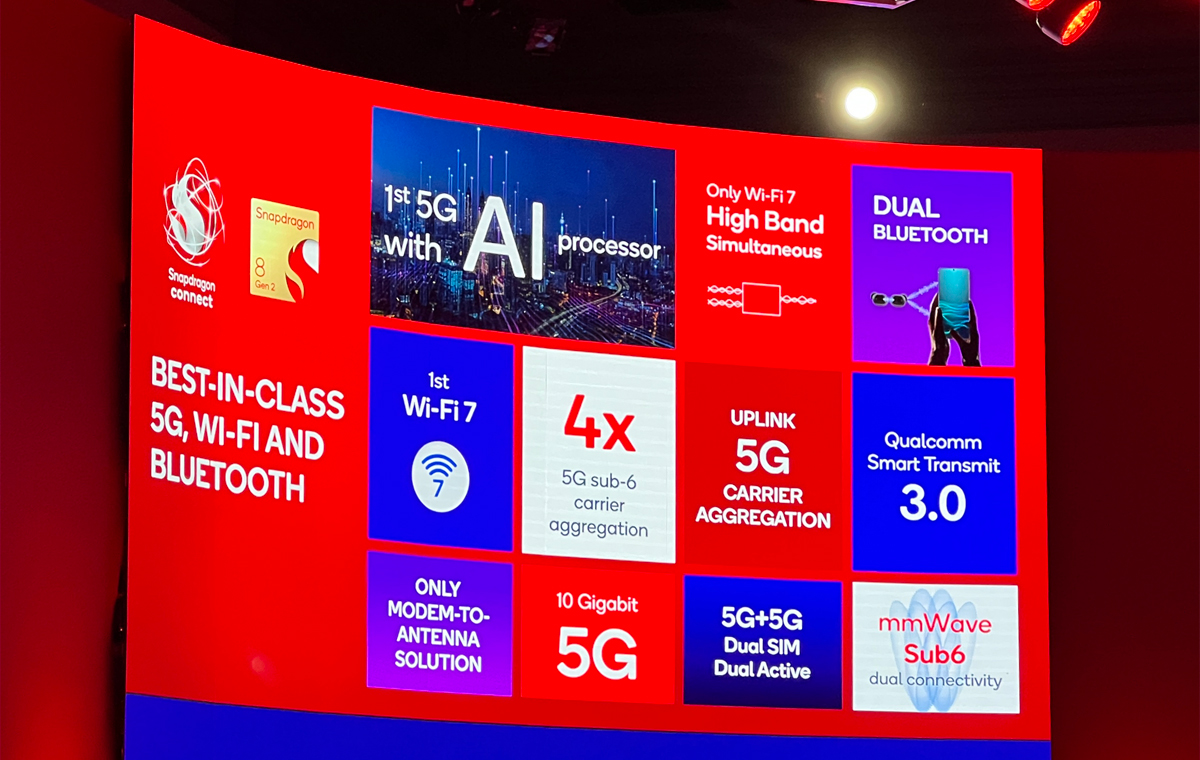 Also, the SD8G2 is one of the first chipsets in the world to support Bluetooth LE Audio, and the Auracast Broadcast Audio standard. The latter is an even better (and long overdue) version of “multi-point” connection where one hosting source can broadcast audio to multiple supported Bluetooth devices.