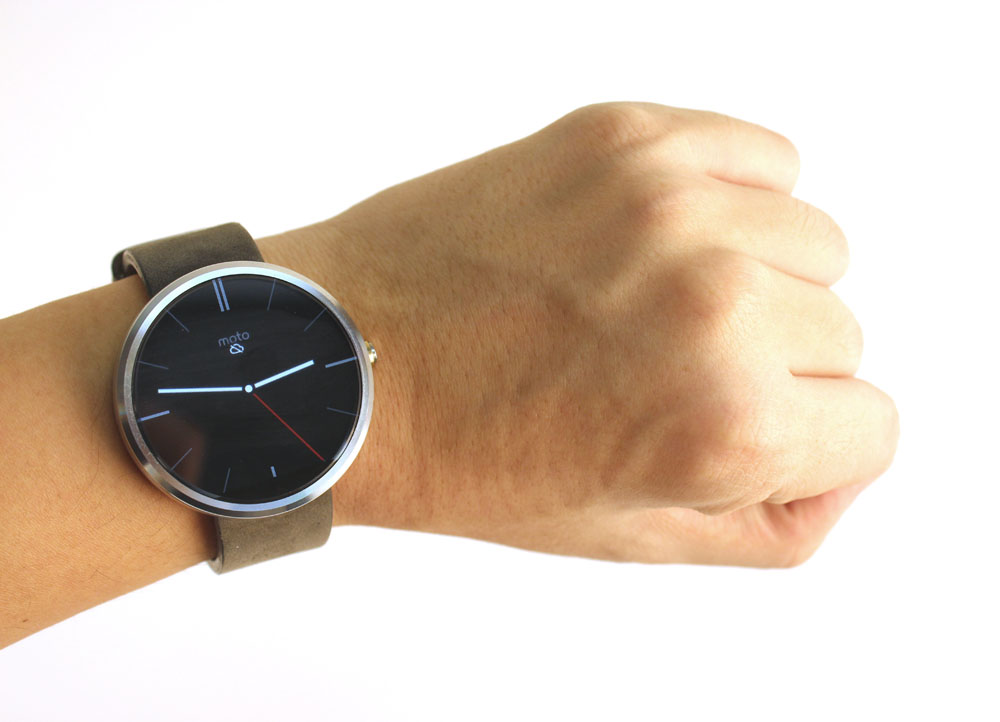 The Moto 360 was the first round face smartwatch. It sports a sleek minimalist design complemented by a premium build of glass and stainless steel, with a leather strap made from high-end Horween Chicago leather. Having said that, while the Moto 360 is undeniably stylish, it does feel a little bulky on its thin strap, both in terms of width and overall height, and the net result makes it look more like a disc on a strap than a watch. Our review unit (and the model that will be available in Singapore) is silver with a grey strap. A black version with a black strap is also available through Motorola's online store. 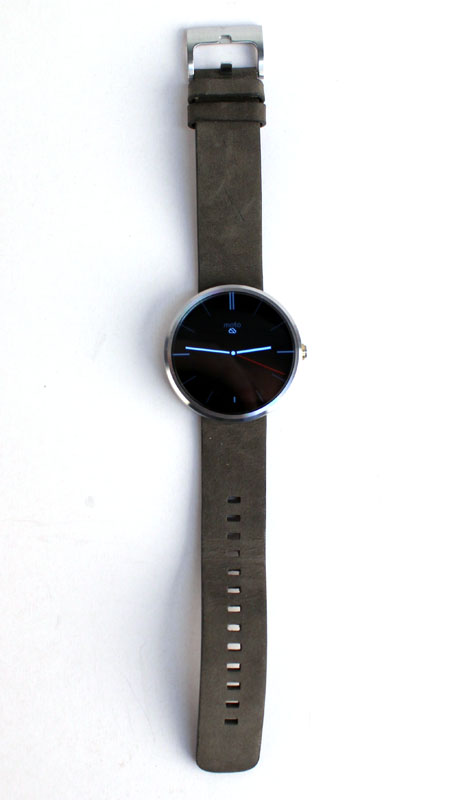 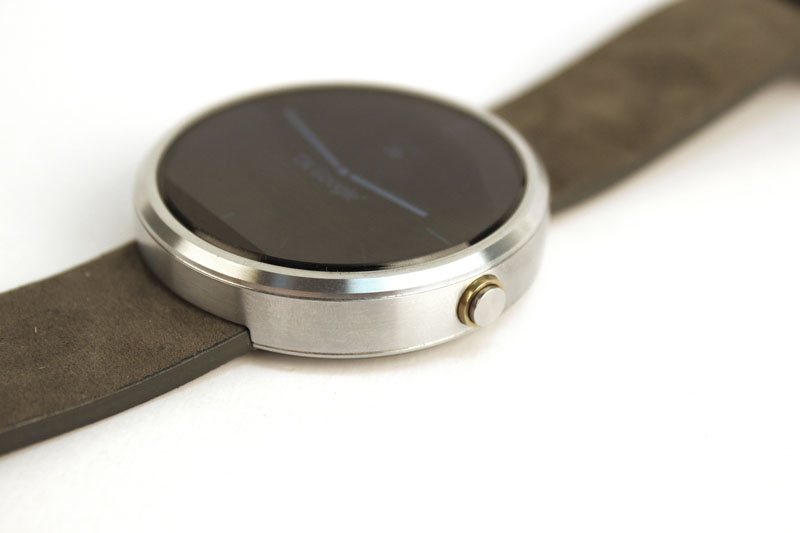 The watch boasts a large 1.56-inch-diameter 320 x 290 pixel resolution display (205ppi) with fairly decent viewing angles and good brightness. Compared to the other round watch in our shootout, the LG G Watch R, the Moto 360's round screen is around 39 percent bigger, with much thinner bezels, which seems like it would be the better circular display, except for the fact that the Moto 360’s display isn’t actually a circle. In Motorola's quest for a round screen with the thinnest outer bezel possible, it ended up adding a little black bar at the bottom of the screen that cuts the circle off. That black bar houses an ambient light sensor for auto-adjusting screen brightness. It’s not a total deal-killer, but for a watch with a beautiful, clean look everywhere else, this perfection-ruining flaw certainly stands out. As a result of the bar, white watchfaces all end up looking like they have a little slice cut out of them, or even worse, a whole section of dead pixels. 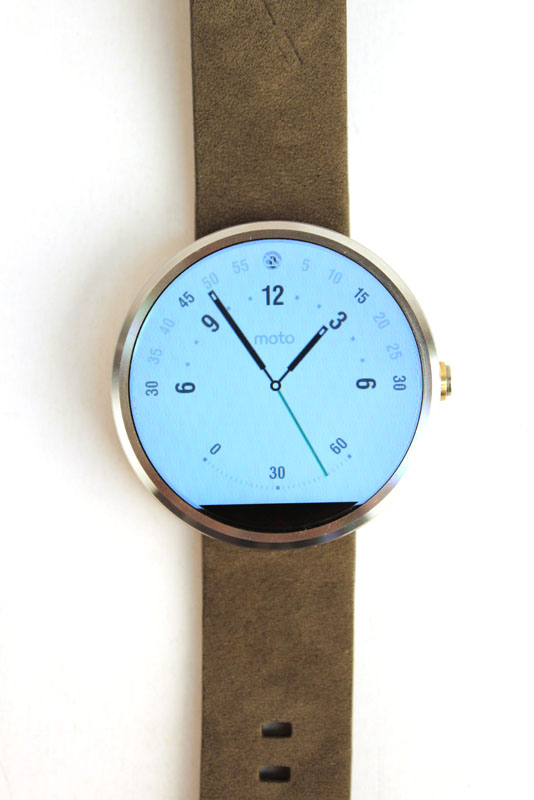 Like the G Watch R, on the side of the Moto 360, there's a little home button that looks like a watch crown that can be used to activate the watch or quickly bring up the settings menu. On the back of the watch, you’ll find an optical green LED heart-rate monitor and inside, the 360 also has a pedometer for activity tracking. We found both the heart rate monitor and step counter to be reasonably accurate, with fairly consistent results overall.

Like the G Watch R and ZenWatch, the Moto 360 runs on Android Wear, but unlike the Qualcomm Snapdragon 400 processors found in LG and ASUS’ watches, the Moto 360 uses a considerably less powerful Texas Instruments OMAP 3 processor. As a result, transitions and animations are just a little bit slower on the Moto 360.

When the Moto 360 was first released, it was plagued with bad battery life. A recent firmware update has improved things but you’ll still only get about 16 hours of life on a single charge out of it, which was the worst in our shootout. The Moto 360 uses a simple inductive charging cradle to recharge, no magnets or connectors required. As a nice touch, the screen will auto flip to the side when the watch is in its cradle. While it’s a neat and simple design, it also has its drawbacks. You need a flat surface to set the charger down on, so if you try to recharge the 360 in your bag or on in an airline seat pocket you’ll find that it won’t stay in place. 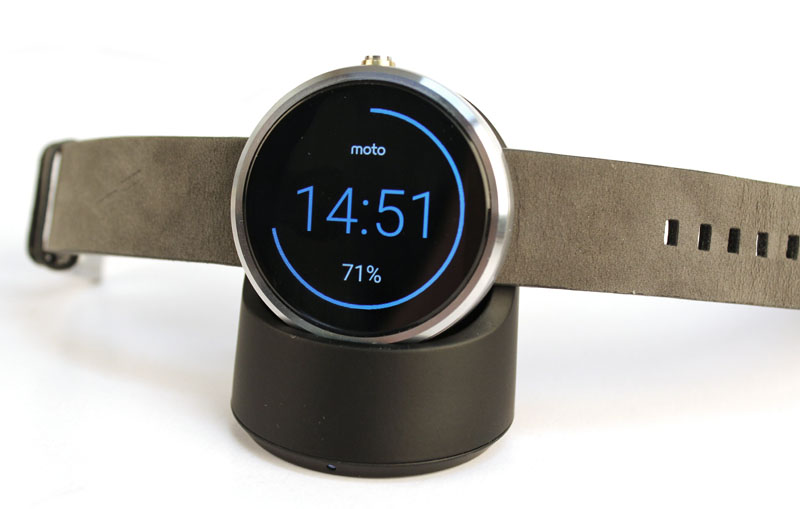