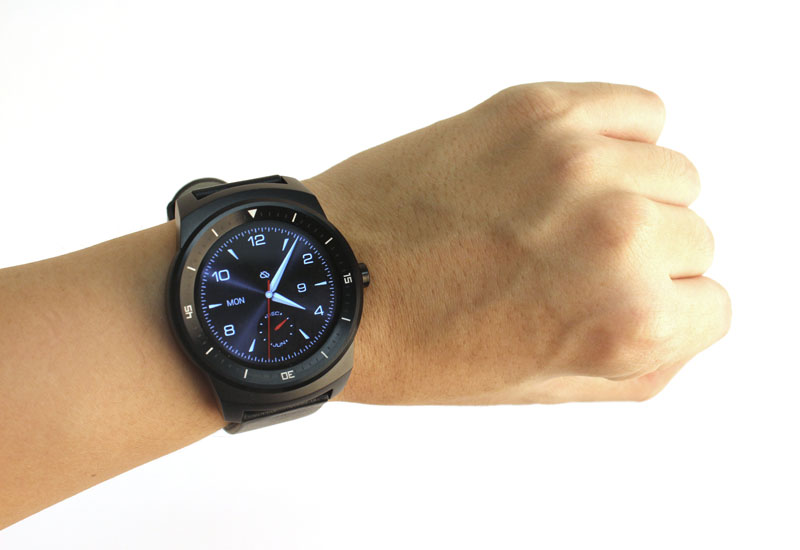 Like the Motorola Moto 360, the LG G Watch R is a round-face smartwatch, but with its bezel markings and recessed glass, it looks a lot more like an actual watch, instead of a disc on a strap. The watch’s chassis is made from stainless steel in a matte black finish and it comes with a genuine black leather strap. The strap is a bit stiff, and isn’t as nice as the leather used on the Moto 360 or ZenWatch, but it can be easily switched out for any standard 22mm watch strap. It’s worth noting that while the bezel around the G Watch R’s face looks like a diving bezel and has the relevant 5-minute markings, it doesn’t rotate and is merely for show. Like the Moto 360, the watch has a non-rotating watch crown on the side that works as a home button. The overall look of the G Watch R with its chunky, angular build and black finish is definitely the most masculine of our watches, especially when compared with the ASUS ZenWatch, which is much softer and more unisex. 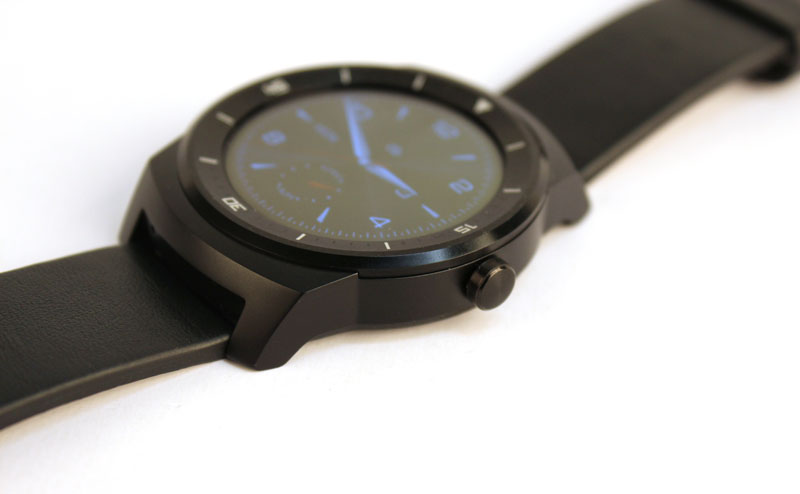 The screen on the G Watch R is recessed into the body of the watch, as opposed to the Moto 360's display, which actually sits slightly above the surrounding bezel. Android Wear requires a lot of edge to edge swiping, so you might find that the protruding bezel gets in the way, but personally, we quite liked the noticeable stopping point. The display itself is a 1.3-inch P-OLED screen with a 320 x 320 pixel resolution (348ppi). The screen is the smallest out of all of our watches, but it's big enough to read messages and see the time clearly. The display is also bright and sharp, with good viewing angles, and it probably has the best color reproduction of all of our smart watches as well. Crucially, unlike the Moto 360, the display is also a perfect circle, although the tradeoff is a lack of an ambient light sensor so you’ll have to manually adjust display brightness. 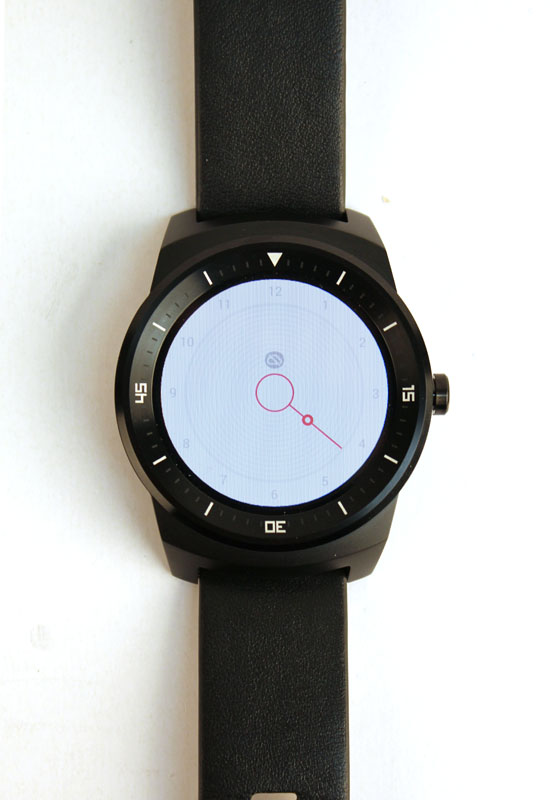 The back of the watch is plastic, and houses the heart rate sensor and magnetic charging connector. As with our other watches the G Watch R also has an accelerometer for activity tracking. In our testing we found both the heart rate monitor and pedometer functions to be reasonably accurate and consistent.

Like the ZenWatch, the G Watch R is powered by a Qualcomm Snapdragon 400 processor and runs on Android Wear. LG has also capitalized on the G Watch R’s round display with a number of exclusive Android Wear watch faces, many of which mimic the look of high-end luxury watchfaces. You can see more of the watch, interface and watchfaces in our earlier hands-on article.

The G Watch R was the best performer for our smartwatches when it came to battery life thanks to its huge 410mAh battery capacity. We were able to get about 24 hours of battery life, even with the screen brightness set to the highest level. You’ll still need to charge it every night via the magnetic clip on cradle, but you can probably stretch battery life to two days if you’re unable to get to a power socket in time.