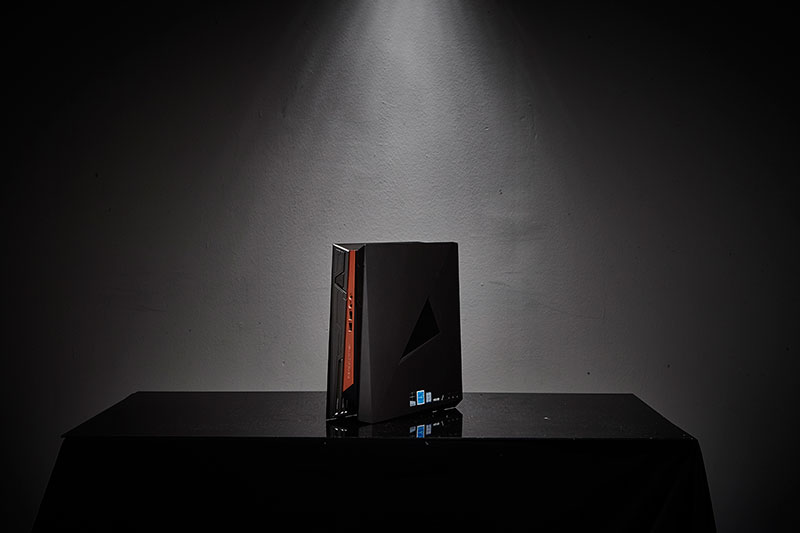 ASUS’ second-generation ROG GR8 II is a nice step up from the tiny machine that was the original GR8. For one, it is quite a bit larger – 4L versus 2.5L – than the GR8, which means that there’s now space for more powerful components.

The first GR8 featured a low-power U-series processor, but this year’s model manages to include a 65W Intel Core i7-7700 chip. That goes a long way toward improving performance, and you also get an NVIDIA GeForce GTX 1060 3GB in there.

However, the GPU is actually soldered onto the board, so it’s not upgradeable at all like the other PCs in this shootout. Performance is also slightly behind what you would get from a non-soldered GeForce GTX 1060 6GB. But all things considered, ASUS’ mini PC pumps out a decent amount of power, and it is still quite capable of handling games at 1080p.

Unfortunately, the 3GB of GDDR5 memory on the GPU can hold the system back at higher resolutions and graphics settings, so you probably won’t want to max out the settings to get a more fluid experience in more demanding titles.

Nevertheless, when it comes to future-proofing and upgradeability, the ROG GR8 II lags behind the competition by quite a bit. You’re really only able to access the RAM and storage, so while you can add in more memory and a larger drive, you’re going to be stuck with the same amount of CPU and graphics performance for the system’s lifetime.

It’s also slightly more troublesome to get at the insides of the system. You’ll first need to pry off one half of the top panel, and then remove four screws – three at the top and one at the bottom – to free up the side panel. Next, you’ll need to slide the panel sideways and toward the front of the system to get it off. 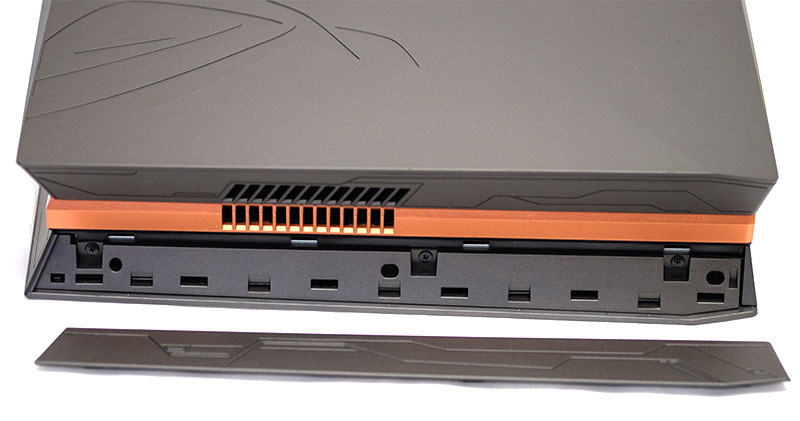 A peek inside also reveals the multi-segmented motherboard, which is a custom design to allow ASUS to fit its hardware into such a small chassis. Thermal performance is also one of the key challenges with such a compact system, and ASUS opted for a dual-chamber cooling system that attempts to compartmentalize the heat output of both the CPU and GPU.

Heat from the GPU is exhausted directly out the back of the case and is not recycled inside, while a separate fan blows hot air out vents at the top of the chassis from the CPU compartment. 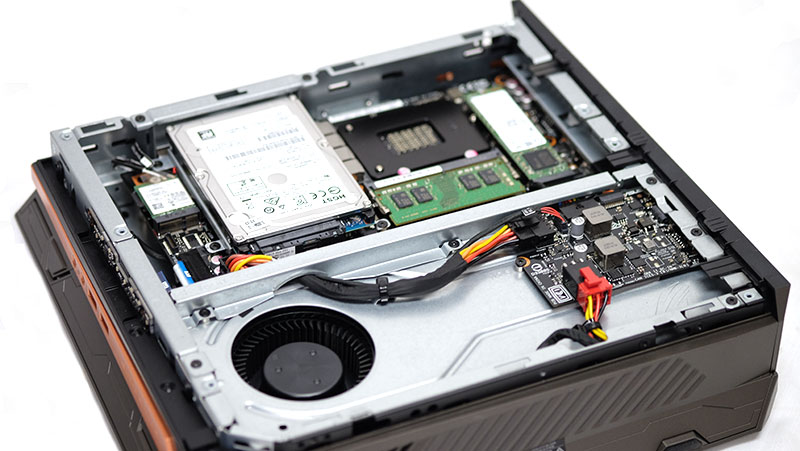 The GR8 II is runs relatively quiet and cool, much to our relief. There is still an audible hum when it’s working particularly hard, but it’s nothing overly bothersome.

And because this is also an ASUS product, there’s bound to be RGB lighting thrown in somewhere. On the GR8 II, you get fancy lighting trails running down the front panel, but these don’t really do much for the design of the PC. That said, it supports ASUS’ Aura software, so it can be synchronized with other compatible gear, but you can also turn it off entirely for a more subtle look. 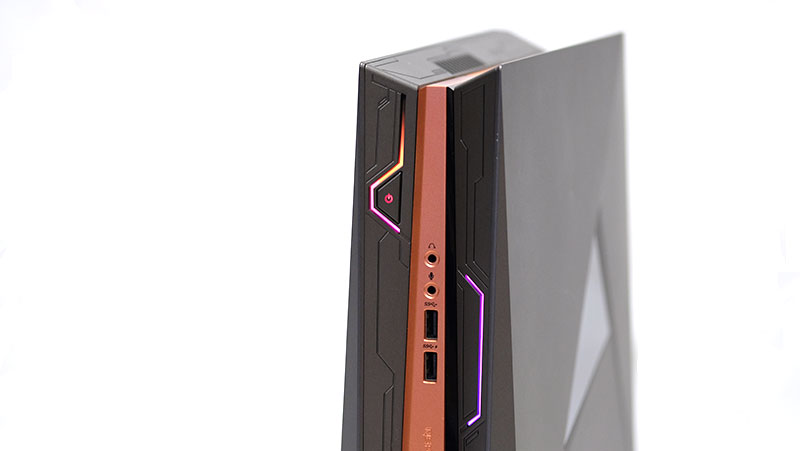 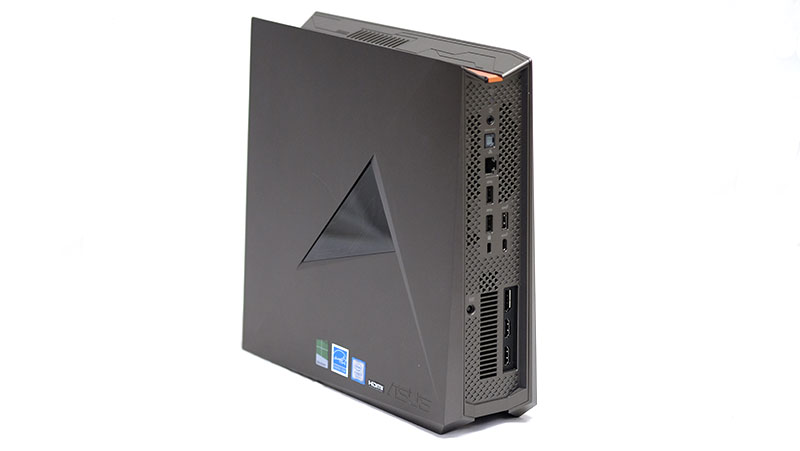 Our review unit came with an Intel Core i7-7700 (3.6GHz, 8MB L3 cache) processor and 16GB of DDR4-2400 RAM, double the amount of memory offered on the other systems tested here. The more powerful processor also gives it an edge in certain CPU-bound games such as Ashes of the Singularity, but because the vast majority of games today are GPU-limiting, this advantage isn’t going to be particularly noticeable most of the time.

And despite its small size, the desktop requires an external power brick for power, which detracts slightly from its claim to portability. 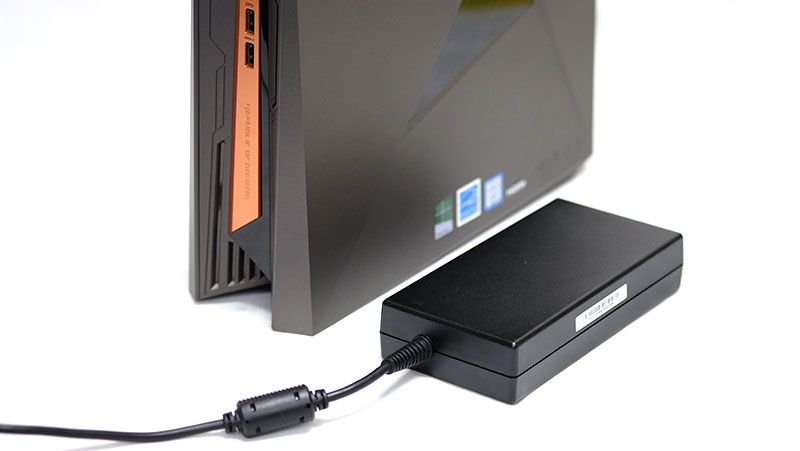 The ROG GR8 II costs S$2,149, which sounds pretty reasonable in its own right. However, because you can get far better performance for around the same price or even less, the GR8 II becomes more difficult to recommend, unless you’re a fan of the ASUS brand or its particular aesthetic.