Singtel's 5G trial and the controls of our speed test 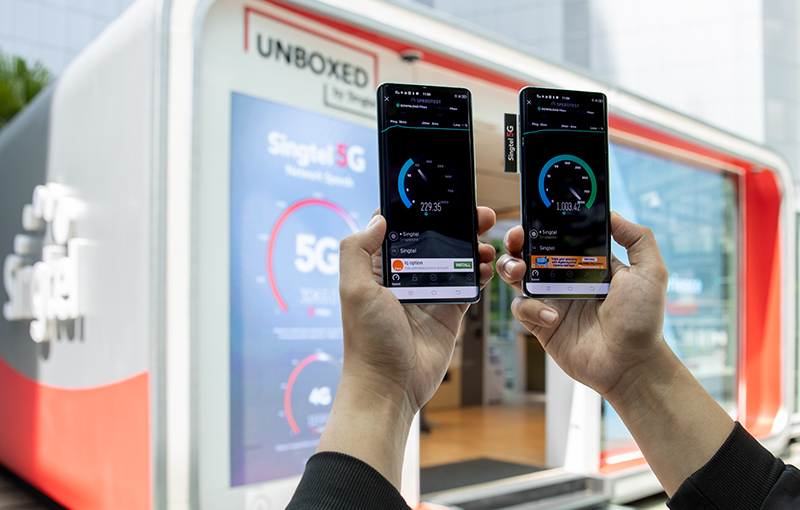 On 1 September 2020, Singtel announced its 5G trial hot after the heels of StarHub's. In Singtel's release, the red camp said they were able to achieve 1Gbps+ real-world speeds. That was certainly a head-turner when we considered the two rounds of StarHub testing (1, 2) we've completed, and its results proved how the setting up of 5G networks isn't something to sneeze at.

The differences between Singtel's and StarHub's 5G trial

From an average mobile data user perspective, there are several key differences between Singtel's and StarHub's 5G trials.

Singtel's trial is free for the first 20,000 Combo/XO plans' users wielding a compatible 5G handset - the first 10,000 are already accounted for, since existing users with compatible 5G handsets are enrolled into said trial at no extra cost, at least for the first three months. Outside of these 20,000, other users can try the 5G trial network at S$10/month (U.P. S$15/month). If the original 20,000 intend to continue trying out 5G on Singtel's network, they too, will have to start on the S$10/month package. Currently, compatible handsets are the Huawei P40 Pro and Pro+, Vivo X50 Pro, and the Samsung Galaxy S20 Ultra. From 18 September onwards, the list will include Samsung Galaxy Note20 (5G version), Samsung Galaxy Note20 Ultra, and the Samsung Galaxy Z Fold 2, with more to come.

In contrast, StarHub's trial sounds more straightforward - if you're on the consumer-oriented Mobile+ plan or the enterprise-version Biz+ plan, you'll be on the green camp's 5G trial network with no extra fees if you have a compatible 5G handset. Compatibility there also follows a release timeline specific to StarHub's planning. 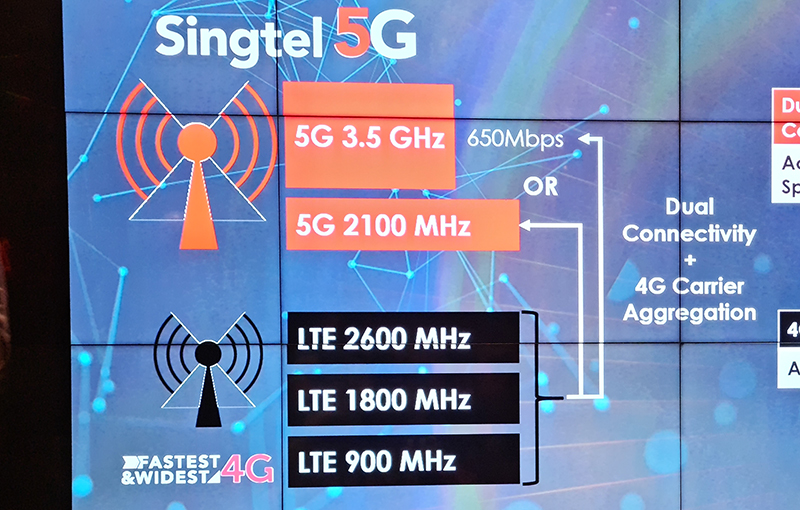 Another key difference is the trial networks deployed by the respective telcos. By now, readers would already know that 5G NSA relies partially on some 4G infrastructure alongside 5G networking equipment. However, uplink and downlink speeds are very much affected by bandwidth and frequency availability - and Singtel was able to tap into the 3.5GHz and 2,100MHz bands from the very beginning of its 5G trial, which partially explains its higher 5G speeds. Using networking magic (the technical term is 4G carrier aggregation), the 3.5GHz or 2,100MHz bands can pair with existing LTE bands of frequency to deliver 5G throughput speeds.

StarHub's 5G trial, on the other hand, uses the 2,100MHz and 900MHz bands (and also NSA networking magic) for its trial period, which resulted in different readings (as seen in our hotlinked tests with StarHub above). That's not to say StarHub doesn't have the 3.5GHz spectrum - in fact, they won the rights (as a consortium) to use it, but it's not been deployed yet when we did our StarHub 5G testing.

We've a quick-and-dirty 5G explainer parked inside our first StarHub 5G testing article if you want to know more about the whole song-and-dance around 5G NSA and 5G SA. 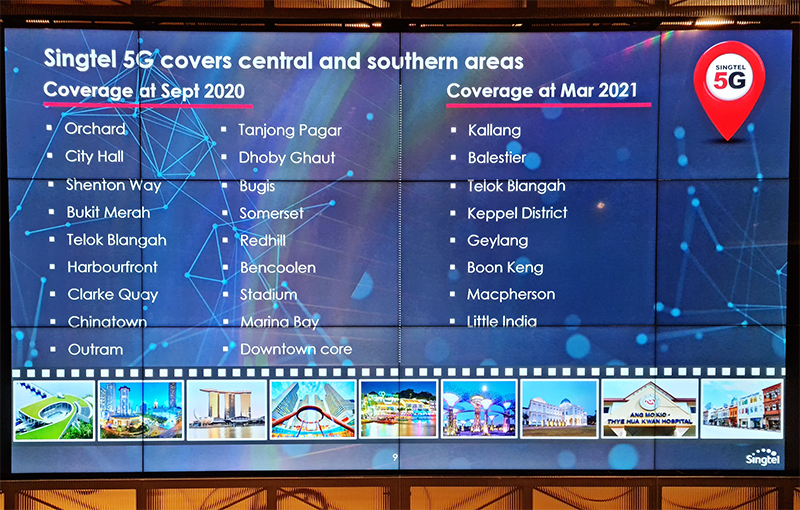 Naturally, each telco would have its unique way of deploying 5G in a way they see fit. In Singtel's case, 5G deployment adopts an outward flow, starting from the Central and Southern parts of Singapore that expands towards each cardinal direction over time. The areas listed beneath "Coverage at Sept 2020" are places where Singtel will have its 5G trial network deployed by the end of September 2020, while the additional locations to their right will see deployment closer to March 2021. Since the trial is barely a week old, it was also necessary for us to combine several recommended areas by Singtel, together with locations of our own choosing. The locations we've managed to access were sufficiently far apart, if we look at them as landmark districts of Singapore.

Like the StarHub's tests we did, we also kept our activities outdoors since indoor and underground 5G isn't yet a thing here. Also, because every telco uses a different deployment approach, it was near impossible to get identical locations to test 5G, so we had to make do with places where we knew we could get hold of the network, instead of simply replicating our StarHub 5G test spots.

It's also worth noting that our experience with getting hold of Singtel 5G was very different from StarHub's. To start with, Singtel's 5G coverage is easily found once we're within the approximate area where its folks said it should be. To give an example: using Kallang Leisure Park as a landmark, we were able to get 5G readings from the adjacent open-air carpark, all the way up to the walkway connecting the mall and Stadium MRT Exit B, and down to the nearby Kallang library open-air area. That's significantly more forgiving than our attempts at latching onto StarHub's 5G network, where a difference of a few metres makes all the difference.

Of course, testing is never smooth nor easy, so the differences in speeds are also subject to many uncontrollable factors - the time of the day, the devices used, what's the weather like, which server you're connected to, how populated a place is, and more. We mention this because we tried to eliminate as many variables as we could.

So, here are our testing parameters:

So, what did we learn after a day's worth of staring into the phones and our humid skies and wonder what's left for us by the time we get home to see the 9/9 sales? Read on.