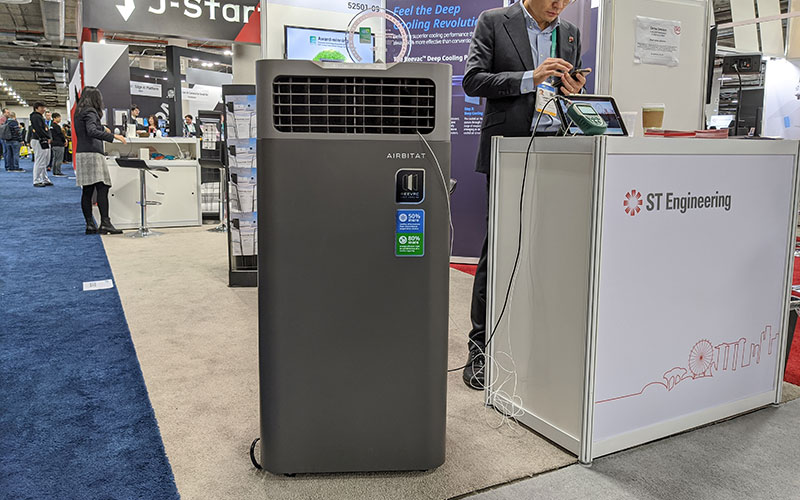 Okay, I admit, it's a gross oversimplification to call the Airbitat Compact Cooler an air-conditioner. It's more accurately known as an evaporative cooler, and it is the coldest cooler of its size. Developed by ST Engineering Innosparks, it's designed to cool outdoor city spaces as the world heats up as a result of global warming.

Traditional cooling technologies come at a huge cost to the environment. For example, the use of air-conditioners and electric fans accounts for a fifth of total energy use in buildings and 10 per cent of global energy consumption. And as we pump heat out of our buildings, the outside world warms up even more.

This creates a need for a more sustainable cooling solution, one that is energy efficient and doesn't generate waste heat. That's where the Airbitat Compact Cooler comes in – it consumes around 80 per cent less electricity than an air-conditioner of similar capacity. More importantly, it doesn't use chemical refrigerants, CFCs, or emit harmful chemicals.

And unlike traditional evaporative coolers that don't do well in humid climates, the Airbitat cooler is perfectly capable of being used even in Singapore, which is practically synonymous with hot, wet, and sticky. 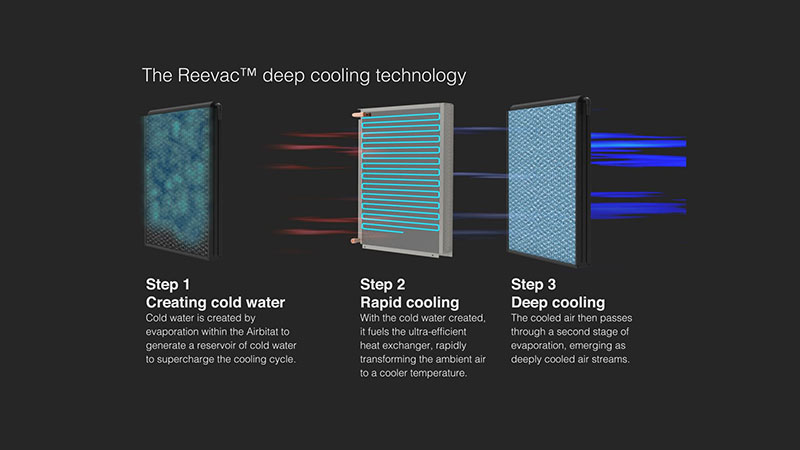 It utilises a three-step process that the company has dubbed Reevac Deep Cooling Technology. While conventional evaporative coolers just pass the outside air through a cooling sheet to chill the air (water doesn't evaporate as well in humid climates), the Airbitat first creates cold water via evaporation to generate a reservoir to fuel the cooling cycle. The air is then passed through a metal heatsink, which removes heat from the air. Finally, the cooled air is passed through a water-laden sheet of sorts, which dissipates even more heat as the liquid evaporates.

The Airbitat is suitable for use in most climates, including arid summers, Mediterranean climes, and even the humid tropics. Compared to regular coolers, the Airbitat is supposed to be just under 3°C cooler.

These coolers are already in use in Singapore, and you'll find 32 of its larger City Coolers in CHIJMES.

4. Power banks you can rent 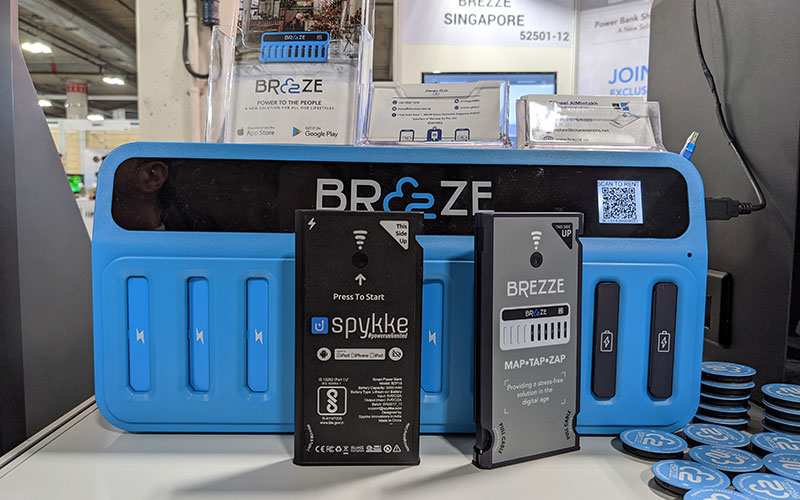 Brezze's proposition is pretty simple – deploy stations that let people rent power banks, so no one has to suffer the nightmare of running on 5 per cent battery when dinner hasn't even started.

The company's iOS or Android app can help you find the nearest Brezze station. At the station, you just scan its QR code using the app and collect your power bank. You're charged according to how long you hold onto it, and you can just return the device by slotting it into any Brezze machine. A receipt will then be sent to your phone. 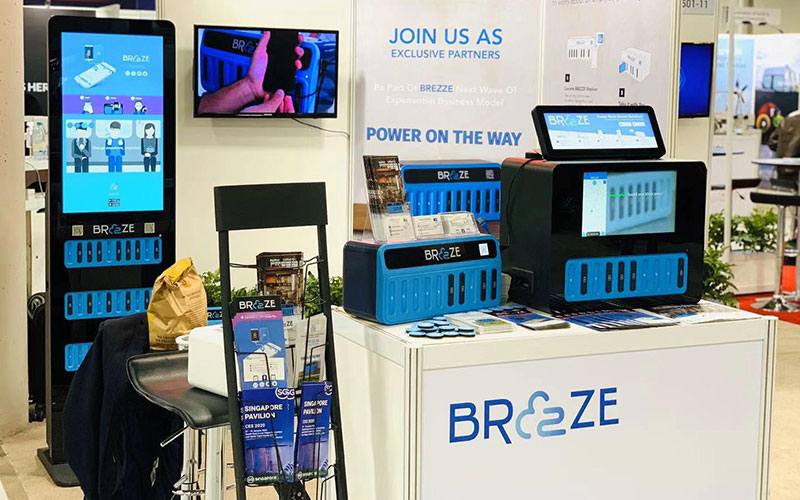 Each Brezze power bank has a capacity of 5,000mAh, and the newer units even support Qi wireless charging. Of course, they come with all the cables you could need, including micro-USB, USB-C, and Lightning connectors. They're MFI-certified as well, so iPhone owners can rest easy. 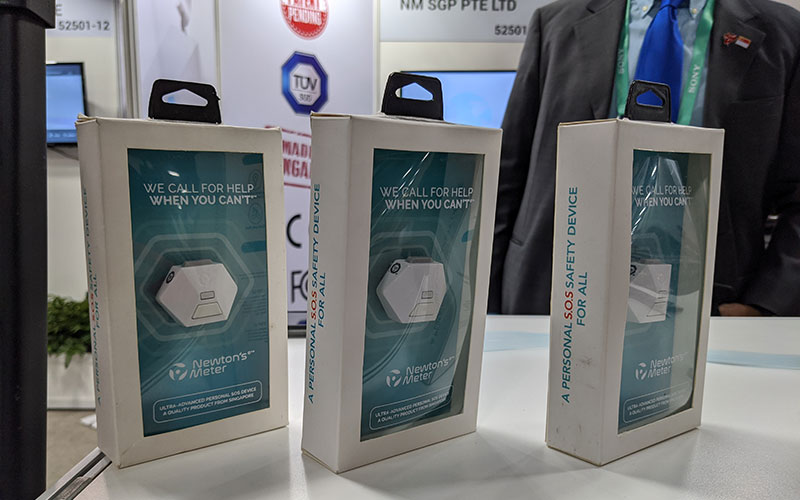 Do you need help keeping an eye on an elderly parent who lives alone? Newton's Meter may have a solution. The company has developed a tiny 14g button that can be worn around the neck, and it'll trigger an alert if it detects a fall. It can then send an SMS with real-time GPS coordinates to up to 10 numbers – sounds a little overkill to me, but you can never be too careful.

Alternatively, the button can be programmed to trigger manually.

It's smart too, and there are measures in place that have been designed specifically to avoid false alarms. The built-in AI can learn your walking patterns, generating a unique "motion print" after about 150 hours of use. Algorithms based on that profile can then detect what constitutes as a fall or accident for you. This means that the fall threshold for a young athlete and elderly person would be vastly different, so your family isn't immediately alerted every time you stumble.

The AI can check for more than just falls too. It can be stuck on your car's dashboard or bike helmet and monitor for vehicular mishaps. In fact, the integrated accelerometer can even tell you whether or not you're riding or driving safely.

The company envisions its device being used outside of the home as well, in hospitals or industrial workplaces. Receivers placed in the building could detect exactly where patients are when they fall, while the device could also help employers keep track of worker movements. Funnily enough, it can even detect skiving employees, such as when the device hasn't moved in a while, or if it's in too close proximity with another, which could indicate that the owner has passed it on to someone to try to game the system.

The device is currently available at a promotional price of US$135 (U.P. US$150). The technology behind it certainly sounds impressive, but what's even more impressive is the guy behind it. Siddharth Mazumdar is only 17, and he made his CES debut last year. He has since showed the Newton's Meter to the police, Ministry of Manpower, and the Defence Science and Technology Agency (DSTA).