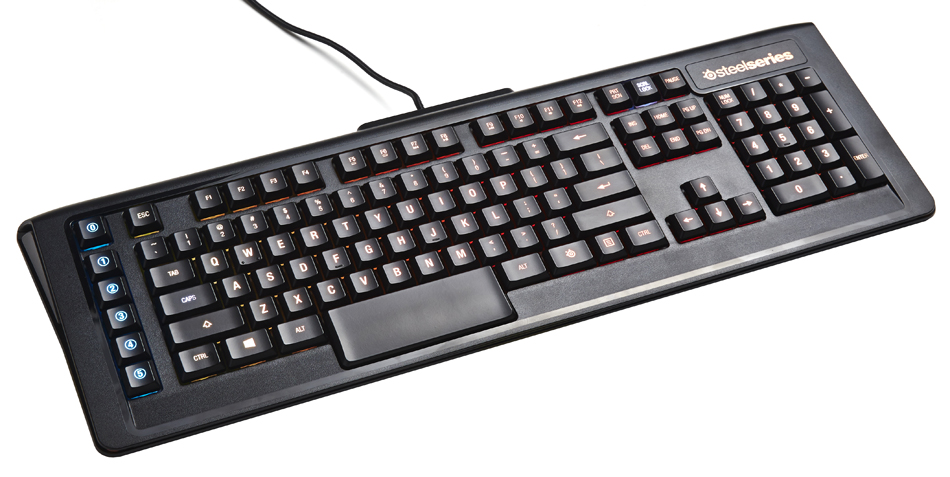 The Apex M800 is SteelSeries’ first completely new mechanical keyboard since the legendary 7G. The keyboard isn’t the most attractive out there with its utilitarian matte-black plastic build but it does the job. On the underside, instead of flip out feet, the M800 has two removable rubber feet – you get a pair of short ones pre-installed, and a longer pair in the box. Along the left side of the keyboard, you get six macro keys. The layout is fairly standard, except for an unusually large space bar. On the back there’s two USB 2.0 ports, but their position makes them somewhat awkward to use.

The M800 uses a completely new type of mechanical switch that SteelSeries has custom designed in collaboration with Kailh. The new switch, the QS1, is designed for low-profile operation and uses a square plunger and a small spring with enough space in the middle to install an LED. The low-profile design is obvious from the get-go. The keycaps themselves are about half the size of standard mechanical keyboard keycaps, and the switch itself only has 3mm of travel. The actuation and reset point are also really short at 1.5mm. The actuation force is 45g – the same as Cherry MX Red and Brown switches. The switch itself is linear and non-tactile and almost completely silent. In usage, it feels somewhat like an MX Red switch, but softer, almost like MX Red’s with a dampening ring. They actually feel like linear versions of Logitech’s Romer-G switches. The QS1 switches are rated for 60 million clicks, which is 10 million more than Cherry switches. Due to the low-profile keys and custom switch, you won’t be able to easily replace the keycaps on the M800.

LED lighting can be controlled through the keyboard itself or through the M800’s SteelSeries Engine 3 software. Each key’s LED can be customised, and the software comes with a range of pre-set patterns and illuminations. I’m quite fond of the default lighting pattern, where keys glow blue when they're pressed before fading back to orange, which makes the keyboard look like a heatmap. The lighting itself is bright and even, and the range of customization is on par with anything else out there. Macro recording is also done through the software, and is easy to use, with options for multiple inputs, delays and other shortcuts. 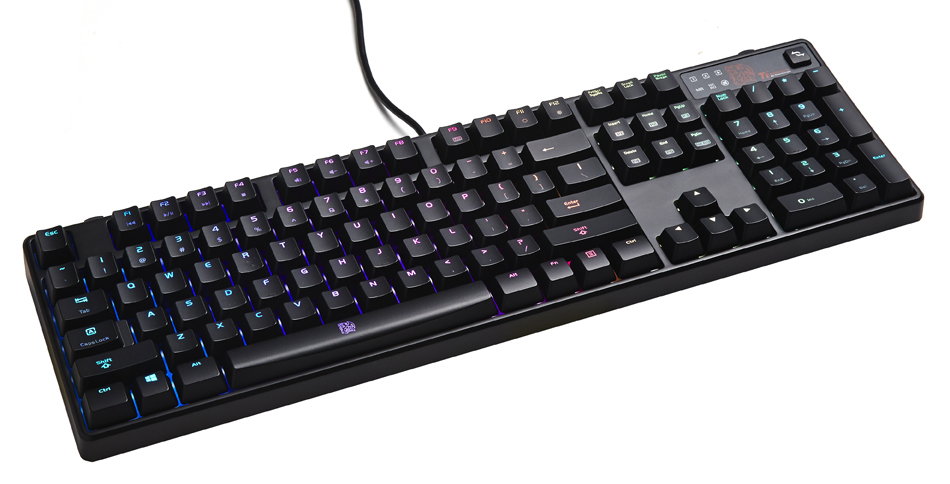 The TT eSports Poseidon Z is a compact mechanical keyboard with a simple matte black, plastic build. The keys are mounted onto a steel plate for extra stability, and the plate itself is finished in a reflective, glittery coating that helps reflect the LED lighting. The keyboard doesn’t have any dedicated media or macro keys, so the Function keys double up as media controls, while the Insert row is used to store macros (and to activate N-key rollover). There’s also an on/off arrow switch in the top right corner that activates gaming mode, which makes the macro keys usable, and also turns the Windows key into another control key.

Under the keys, the Poseidon Z uses Kailh mechanical switches, which are Chinese clones of German Cherry MX switches. Unlike the transparent switch housing used on Cherry’s RGB switches, the Kailh switch has the LED built into the top of the switch. This results in the lighting not being quite as bright or uniform as Cherry switches (we also saw this with the Armageddon MKA-11). According to Kailh, their switches are rated for 50 million key strokes, which is exactly the same as Cherry switches, but it remains to be seen if they’ll actually hold up for that long. The Poseidon Z is available in either Blue or Brown switches, both of which are tactile. Unfortunately, there’s no option for the linear and very popular Red switch, which is unusual for a gaming keyboard.

Thermaltake uses an NXP LPC11U3 micro controller inside the Poseidon Z, which combines a 32-bit ARM Cortex M0 core with a 16-bit LED controller. The keyboard requires installation of TT eSports’ Poseidon Z RGB software to control the lights, as without it, it will just shine a monotonous red color. Once installed, lighting is easy to configure and the software gives you full control over the color of each key, as well as a number of animations and effects. The backlighting isn’t quite as bright as others we’ve seen, but it’s sufficient. With the software installed, you can also record macros on-the-fly by pressing Fn + F9. Overall, while the Poseidon Z RGB doesn’t offer a whole lot in terms of features, it gets the job done, and it’s also much cheaper than our other keyboards.