The Razer BlackWidow X Chroma is Razer’s newest mechanical keyboard and is basically a stripped down version of its existing BlackWidow Chroma. The main difference is the lack of a plastic faceplate covering the keyboard. Instead, you get an exposed military-grade metal top plate (which is also found inside other Razer BlackWidow keyboards) with the switches attached directly to it. It’s a look that’s also favored by Corsair and Armageddon. Razer has also removed the macro keys from the left-side of the keyboard, resulting in a slightly smaller footprint. Unlike some of the other BlackWidow keyboards, there are no USB or audio ports on the X Chroma.

The BlackWidow X Chroma is only available in Razer’s Razer Green switch, which is built for Razer by Kailh. It’s a tactile, clicky switch that feels very similar to Kailh or Cherry MX Blues. The only difference – and it’s a small one – is a marginally higher actuation point. According to Razer, Razer Switches are rated for 60 million keystrokes, 10 million more than either Cherry or Kailh’s own switches. Unlike most custom switches, Razer switch stems are actually compatible with Cherry stems, however, the bottom row uses non-standard sizing, so it’s not easy to find a full set of custom keycaps. Razer has also ditched its custom letter font on the X Chroma, in favor of a more normal, easier-to-read one. One complaint I have with the default keycaps is that they pick up fingerprint oil and smudges very easily, so you’re frequently having to clean them.

As with all of Razer’s peripherals, you’ll need to install and sign up for a Razer Synapse 2.0 account. This saves all of your settings in the Cloud, so you can take your keyboard with you, plug it into a new computer, load up Synapse and have all of your macros and lighting options still be there. Synapse has great lighting options with a comprehensive and easy-to-use configuration menu that lets you set up per-key illumination or whole keyboard lighting options. You can also use Synapse to program macros, alternatively, on the fly macro recording is also available. 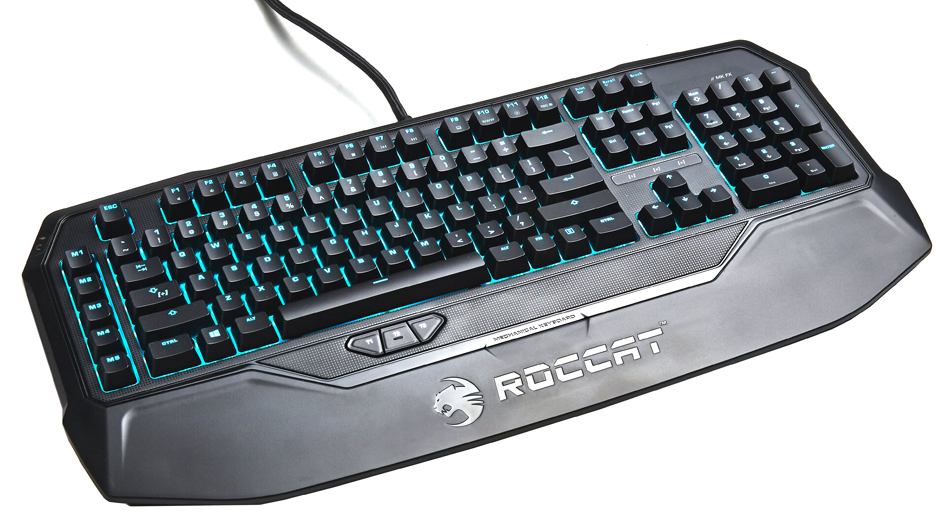 The Roccat Ryos MK FX is an update to Roccat’s Ryos MK Pro keyboard with the addition of RGB lighting. The huge keyboard is built entirely from matte black plastic but feels solid and looks great with its micro-dot glossy pattern – it also has one of the thickest braided USB cables I’ve ever seen. Like Roccat’s other Ryos keyboards, the MK FX has a large, unremovable wristrest, which might be an annoyance to some (especially those with limited desk space), but personally, I found it comfortable and well-positioned. The wristrest itself has three ‘thumbster’ buttons that sit just below the spacebar. The positioning of these macro buttons means they can be hit with minimal effort, unlike the macro buttons commonly found on the left side of most gaming keyboards – speaking of which, you get five of those too. At the top left corner, the Ryos MK FX has headphone and microphone ports. On the bottom, two flip out rubber feet let you adjust the typing angle.

The MK FX uses two on-board 32-bit ARM Cortex processors, one to control lighting and one to control macros. You also get 2MB of onboard memory to store all of your configurations, as well as full n-key rollover and anti-ghosting. You’ll need to install Roccat’s Swarm software to control the lighting on the MK FX. Inside Swarm, you’ll find AlienFX, which was created in collaboration with Alienware. AlienFX is one of the most comprehensive lighting software we’ve seen and has options for pretty much anything you can think of, with in-depth customizable per-key lighting and a variety of whole keyboard effects. The lighting itself is bright and uniform across the keys.

One other feature worth mentioning is Roccat’s Easy-Shift[+] key, which replaces the caps-lock key. This key lets you assign secondary functions to any other key (including the three thumbster keys and five macro keys), effectively letting you double up the amount of macros and commands you can store. Holding down the Easy-Shift[+]key while simultaneously hitting another key activates any secondary function you’ve assigned. If you want the caps-lock to function normally, you can create a Windows profile for when you’re not gaming. Alternatively, you can remap Easy-Shift[+] to another key.