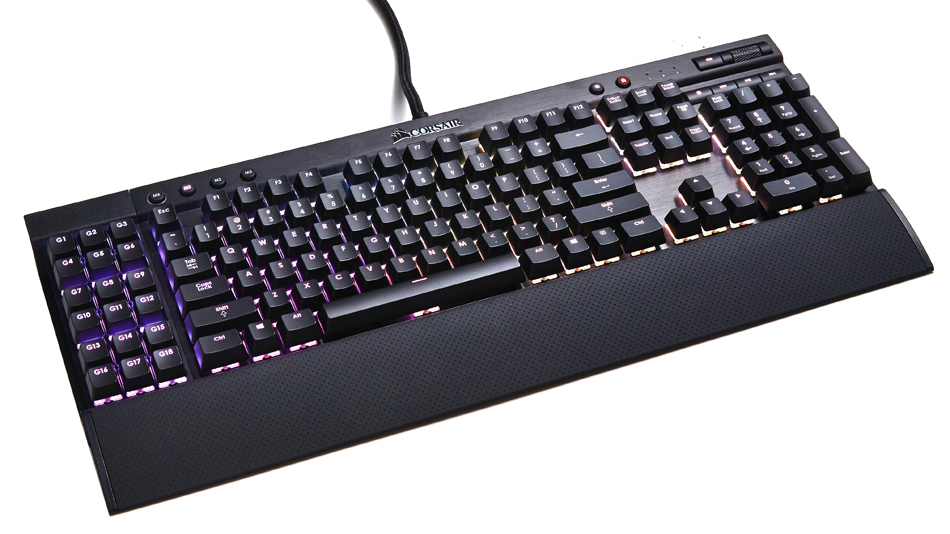 The Corsair K95 RGB is a massive keyboard with a detachable wrist rest and a whopping 18 dedicated ‘G’ macro keys on the left-side. Like the Armageddon MKA-11 and Razer BlackWidow X, the K95 has an industrial design with the keys attached directly to an aircraft-grade black anodized aluminum plate. The metal construction is rock solid and looks great, while the soft-touch, textured wrist rest is comfortable and practical. If I have one complaint, it’s that the ‘G’ macro keys sit on a plastic extension connected to the aluminum plate which doesn’t look as nice and makes the keys feel different too.

At the top right of the keyboard, you also get dedicated media keys and a volume wheel. Small rubber feet on the base of the keyboard let you adjust the typing angle. A small BIOS switch on the back lets you choose between 1ms, 2ms, 4ms, and 8ms polling rate, but there’s really no need to set it to anything but 1ms.

The keyboard uses Cherry MX switches in a choice of Red or Brown and uses standard stems and keycaps that can be easily replaced with a custom set. Like the Coolermaster Masterkeys Pro, the switch housing is transparent, which helps the LED light shine through. The keyboard has 122-key rollover and anti-ghosting.

LED lighting on the K95 RGB is nice and bright and can be programmed to glow in any color. Each key can be individual programmed to display a different color. You can also add effects, such as changing the key color when pressed. The usual wave, ripple, and breathe effects are also available. Lighting is controlled through an onboard 32-bit ARM processor.

On top of the 18 G keys, the keyboard also has 3 M profile keys that you can switch between, giving you a total of 108 programmable commands. Macros can be recorded on the fly with the MR button, but you’ll need the Corsair Utility Engine software installed to do so. 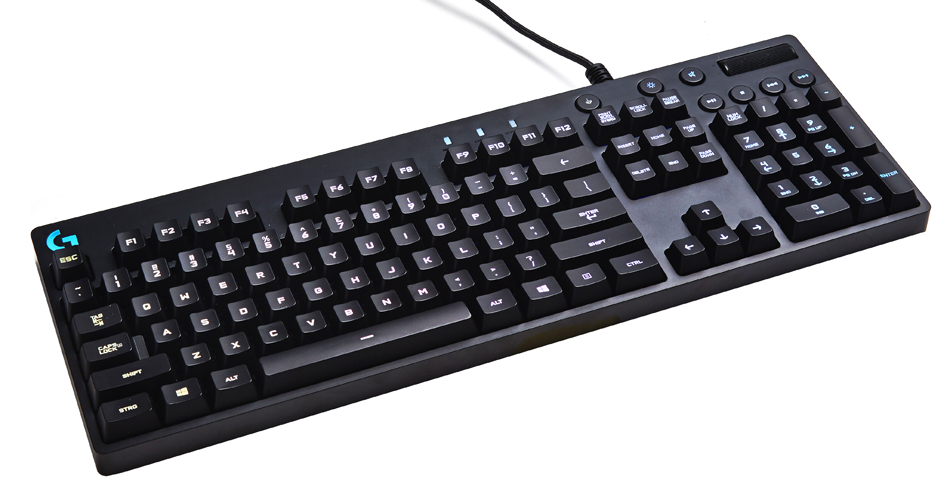 The G810 Orion Spectrum is a compact mechanical keyboard with a simple black plastic housing that is matte on the top and glossy on the sides. Inside there’s a steel plate for stability. While it doesn’t have a wrist rest or much in the way of borders, the G810 makes good use of available space with dedicated media controls at the top right, which includes a volume scroll wheel. On the bottom of the keyboard, two rubber non-slip feet let you adjust the typing angle between 0, 4, and 8 degrees.

The G810 uses Logitech’s Romer-G switches, which are made in Japan by Omron, and are rated for 70 million keystrokes, making them more durable than both Cherry and Kailh switches. The switches are non-clicky and have a low 45g actuation force (the same as Cherry MX Browns and Reds) and a very light tactile bump, similar to MX Browns. The switch has a short actuation point of 1.5mm (MX Browns are 2mm) and travel from actuation point to bottoming out is also quite short – I estimate total travel to be about 3mm. Compared to MX Browns, the Romer-G switches feel a little softer, almost like Browns with dampening rings. The keyboard features 26-key rollover and anti-ghosting. While this isn’t quite as good as full N-key rollover, I didn’t notice any issues when typing or gaming.

Romer-G switches use a unique stem, so unfortunately the keycaps aren’t easily replaceable. On the plus side, the default keycaps are quite comfortable and feel fairly standard, with a comfortable sculpted curve.

The G810 runs on Logitech’s Gaming Software, which you can use to easily reprogram certain keys, link games to custom profiles and play with the keyboard's full RGB backlighting. The software will automatically scan your system for installed games and create profiles for them. The G810 doesn’t have dedicated macro keys, but with Logitech’s software you can program macros or key commands and bind them to F1 through F12 instead.

Lighting can be configured on a per-key basis, or you can opt for patterns such as a rainbow wave that passes along the keyboard. You can also have the keys change color when you tap them. Customization isn’t quite as deep as what you get with Steelseries, Razer or Roccat, but most of the basics are there.