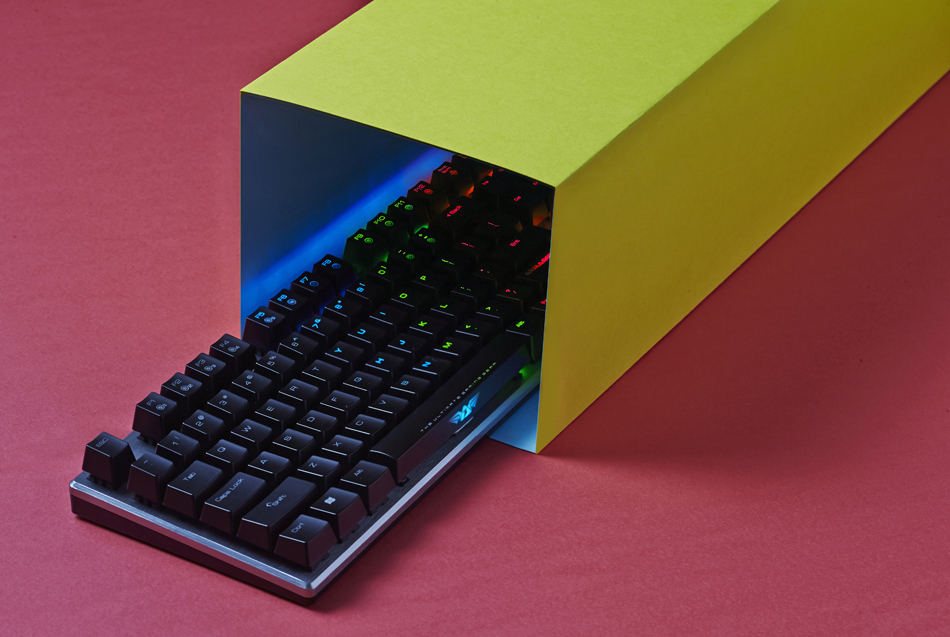 LED lighting and gaming keyboards go together like noobs and tears. But in the past, LED lighting was generally just one color and mostly for show. Today, we have gaming keyboards with lights capable of displaying up to 16.8 million colors. These keyboards can be programmed to light up individual keys, the entire keyboard, or to only light up certain keys when conditions are met. So if you’re the type of gamer that wants every possible advantage (and let’s be honest, who isn’t), you need one of these keyboards.

The Armageddon RGB Raptor MKA-11 is an industrial-style mechanical keyboard with the key switches attached directly to an exposed aluminum plate. Below the plate, a glossy, black plastic layer forms the base of the unit. Underneath, two small feet let you change the angle of the keyboard. The MKA-11 doesn’t have any dedicated macro keys but you do get some media control keys in the top right corner above the number pad.

The switches on the MKA-11 are Kailh clones of Cherry MX switches, rated for the same 50 million keystrokes. Kailh switches are made in China, while Cherry switches are made in Germany, but otherwise seem functionally identically. There are reports of Kailh switches not being as consistent as Cherry switches in terms of actuation force and distance, but I experienced no such issues with this keyboard. My review set is equipped with Kailh blues, and in usage, the switches feel functionally identical to Cherry MX Blues. Obviously I haven’t been able to put them through 50 million keystrokes to see if they hold up, but I’ve no complaints so far. One thing that’s nice about Kailh switches is that the stems are compatible with keycaps made for Cherry switches, so you can easily switch to a custom set if you want. The default keycaps have a shallow curve to them, but are otherwise fairly standard. The keyboard has full N-key rollover and anti-ghosting, so you’ll have no problems with dropped inputs.

LED lighting on the keyboard can be controlled through software or by using the Fn key + F1 - F11 to cycle through the eleven various effects (F12 turns the lighting off). The lights aren’t as bright as the lighting we’ve seen on other keyboards but they’re sufficient.

Macro recording can’t be done on the fly and has to be set up through Armageddon’s software. The software lets you set up profiles for each game, and you can then record macros and assign them to different keys. Every key can be programmed, except for the four media keys in the top right – which is a bit frustrating as their position makes them perfect macro candidates. 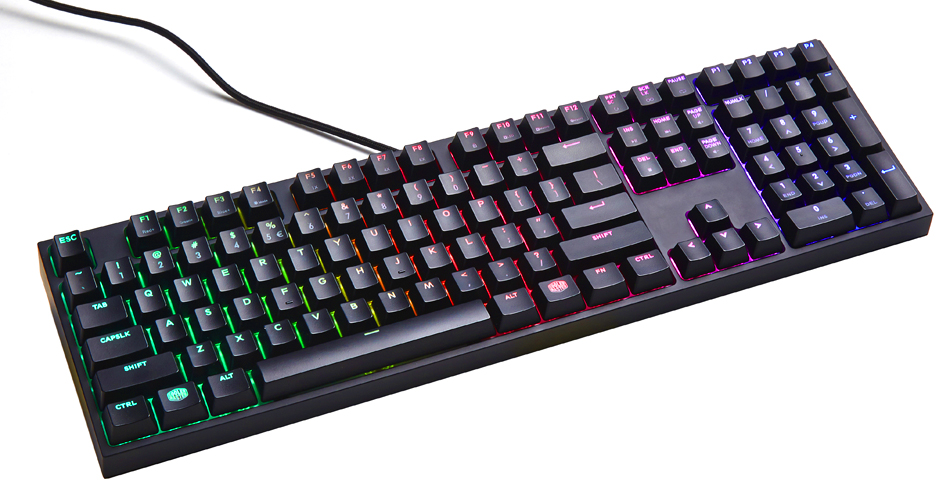 Cooler Master’s new Masterkeys Pro keyboard line comes in two variations: L and S. The Pro L is a full-sized keyboard, while the Pro S is a tenkeyless option. In addition to a numberpad, the Pro L also gets four additional profile switching keys in the top right corner.

Both keyboards use a simple, matte black two-part plastic frame, with a steel plate inside for stability. The plate is painted white to better reflect the LED lighting. On the bottom of the keyboard, two flip out plastic feet let you adjust the typing angle. The keyboards connect through a detachable braided micro-USB cable, which is nice since you can replace it if it gets damaged. Both keyboards are available in Cherry MX Brown, Red or Blue switches and use standard Cherry MX stems. On all three versions, the switch housing is transparent, which helps the LED lighting shine through. Cooler Master has also redesigned the PCB with smaller cutouts to let the LEDs sit snugly against the switches. This results in much brighter and more uniform backlighting. In fact, the Masterkeys Pro L is probably the brightest keyboard in our shootout. The keyboard also has full N-key rollover and anti-ghosting.

Inside the keyboard, a 32-bit ARM Cortex M3 72MHz processor and 512KB of memory are included for storing and playing back custom macros, which can be programmed on the fly without the need for any software.

The ARM processor also controls the keyboards lighting options. By default, pressing FN and F4 will cycle through various patterns and modes, including wave, static and reactive effects as well as some silly options like being able to play Snake on the keyboard with the arrow keys. In most modes, you can control the color using FN and F1, F2 and F3, which represent the red, green and blue channels respectively. You can mix and match these levels to create pretty much any color. You can also create your own per-key pattern. In this mode, the FN key will light up in the currently selected color, and you then tap any keys you want in that color.

While the keyboards don’t require any software to use, Coolermaster does provide software for users who prefer an easy-to-use GUI to customize their macros or lighting options.