This is how much Nimbus Data's 100TB SSD will cost
Shootouts 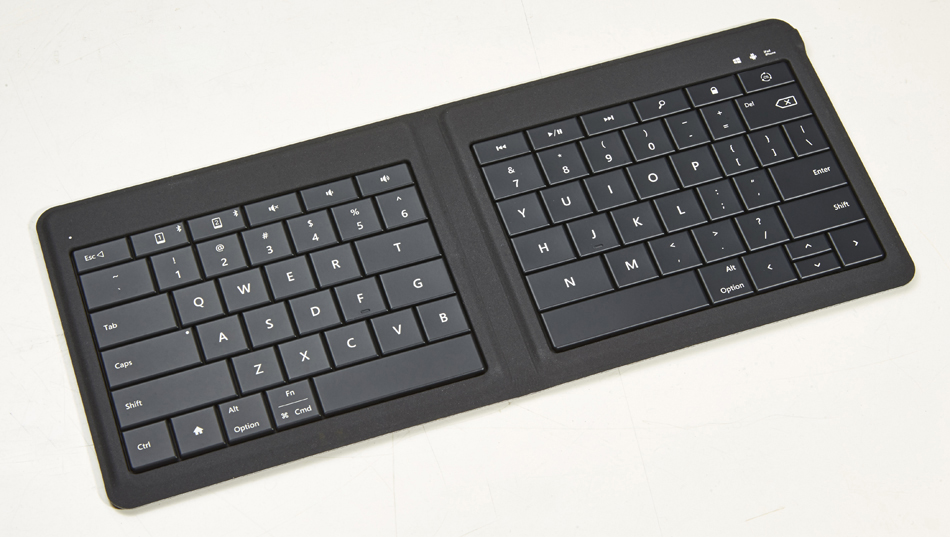 Microsoft’s Universal Folding Keyboard is uniquely split in two with a hinge in the middle so you can fold it in half. This makes it by far the most portable candidate in our shootout.

Open, the keyboard measures 295 x 125 x 5mm, but folded closed, it’s just 145 x 127 x 10mm. It’s also the lightest keyboard in our shootout at just 178g. The keyboard is made of a gray soft-touch material on the outside and around the edges, while the keys are black plastic. The whole thing is water-repellent. The keyboard is powered by a rechargeable battery, which Microsoft says will last for three months, after which you’ll have to charge it using the included microUSB charger.

Open it up and the keyboard will turn on automatically. To pair the keyboard, just hold down one of the two function keys used to switch devices, wait for it to light up, and pair. You can pair two devices at the same time. An OS Switch key in the upper right corner flips the function keys between Windows, Android, and iOS modes.

On the inside, the keyboard is essentially the same as Microsoft’s Surface Type Cover keyboard, but with a big gap in the middle. While this gap in the keys makes it look similar to a split ergonomic keyboard, the Foldable Keyboard doesn’t qualify as such, as it doesn’t angle the two portions of the keyboard into a more comfortable typing position. Unlike our other keyboards, it also lies completely flat.

The big gap between the keys is hard to get used to. The unusual layout, in combination with some keys being twice the size of others (T, G, 7, H, and N) also makes typing on the keyboard quite awkward as the keys just aren’t where your fingers expect them to be. On the plus side, the keys themselves are firm with a nice tactile response. Note that there are also no function row keys, although you do get a line of dedicated media controls. 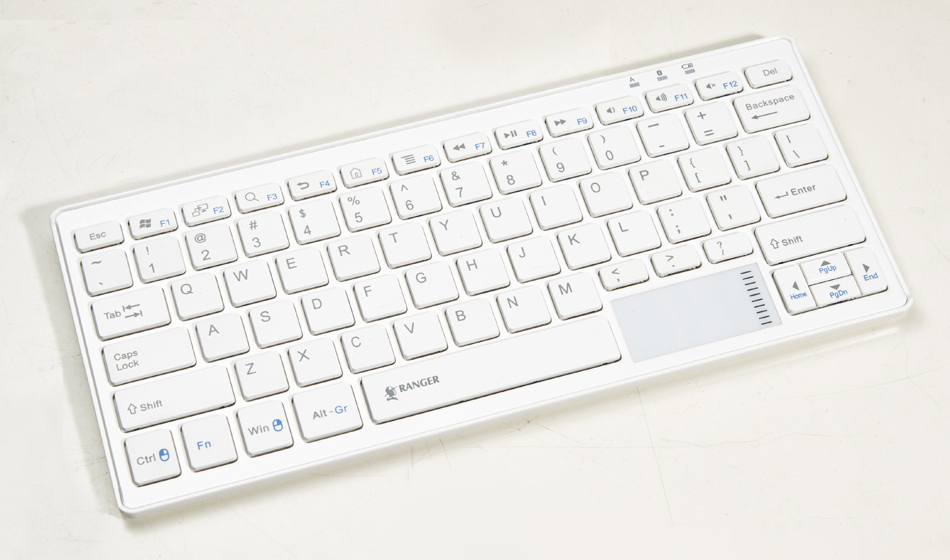 The Ranger Touchpad Bluetooth Keyboard is the only keyboard in our shootout with a built-in touchpad. The keyboard is made entirely of white glossy plastic and measures 287 x 125 x 12mm. It’s fairly light at 250g and tapers slightly, but not enough to provide an elevated typing angle.

To pair a device, flip the keyboard over and you’ll find a small selector switch on the bottom. Choose one of the three positions and hit ‘connect’ to discover and pair your device. Being able to pair and switch between three devices simultaneously is nice, but the position of the switch on the bottom of the keyboard makes it annoying to use. The keyboard has an integrated battery, which Ranger says will last about 48 hours of continuous usage between charges. Recharge it with the provided micro-USB cable.

The keys on the Ranger keyboard are nice and firm, thanks to a stiff scissor switch mechanism. There’s also a surprisingly large amount of travel and a decent amount of space between the keys as well. In the top right corner, there are indication lights for caps lock, Bluetooth connectivity and charge status. Like the K380, the F3 to F6 buttons double up as Android keys and you also get media control keys on F7 to F12.

The keyboard’s integrated touchpad is an interesting addition but a bit too small to replace a mouse or proper touchpad. Its best feature is the scroll portion on the right, which is useful for browsing long websites. Annoyingly, it doesn’t have a click on it, so you have to use the left control key to left click and the windows button to right click.

The touchpad also takes up a lot of space and, as a result, the comma, period and question mark keys are half-size, which is really frustrating, as I almost always tap the top of the touchpad when trying to hit them. Another thing to note is that the letters on the keys are screened on, which, in combination with the glossy white plastic, makes the keyboard look a bit cheap. The screened on letters may also peel off over time.