8-inch tablets are considered close relatives of the phablets - devices with screen sizes of at least 5.5-inches - and hence, one shouldn't be surprised if they are used as a primary or secondary device for voice telephony if the feature is supported. Of the three tablets in this comparison, only the Galaxy Tab S 8.4 supports this feature. However, the other two tablets come with somewhat similar features. Let's check them out: 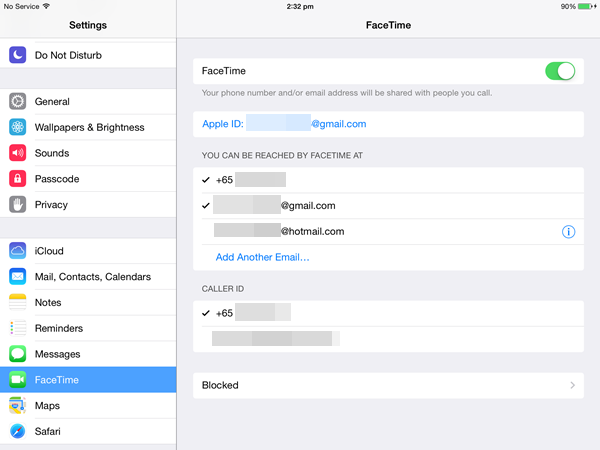 FaceTime, one of Apple's built-in apps, allows you to make video calls or voice-only-call over a Wi-Fi or cellular connection. If you make a FaceTime call over a Wi-Fi connection, data usage will not be applicable against your data plan. Likewise, FaceTime calls over a cellular network will count against the data plan you have. Do note that video calls typically consume more data than audio calls. 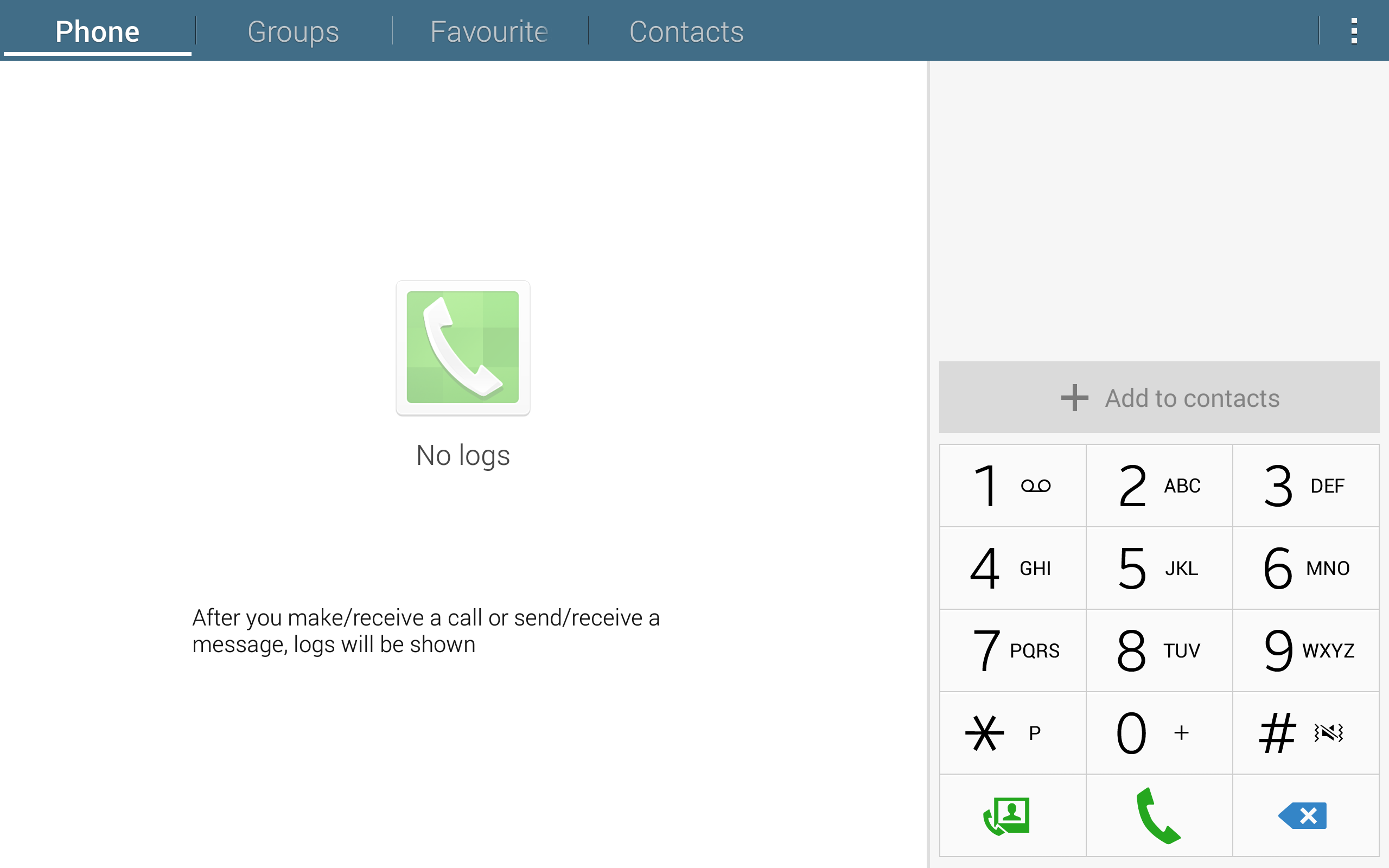 Since the introduction of its first tablet (the Galaxy Tab), Samsung has been equipping most of its tablets (models with cellular connection) with voice telephony functions. While we agree that it does look ridiculous to hold up a tablet next to the ear for voice calls, the availability of Bluetooth and wired headsets make it more socially acceptable to be using a tablet as a phone.

The Galaxy Tab S 8.4 (Wi-Fi + 4G LTE) supports such a function with a pre-installed Phone app.The interface looks exactly like that of its smartphones, so Samsung phone users should feel right at home using the Phone app on the tablet. As the call is made over a cellular network, you can expect the quality to be similar to that of  a smartphone.

Video calls are also possible on the Galaxy Tab S 8.4 as it has a 2.1-megapixel front-facing camera. However, there is no default app by Samsung to support video calls and you have to download third party apps such as Skype.

The Galaxy Tab S 8.4 also supports an updated version of SideSync, which started off in 2013 a PC-Mobile syncing and file management tool between select Samsung Ativ PCs and Galaxy phones. It has been updated to version 3.0 on the Galaxy Tab S 8.4 where you can accept or reject incoming calls on the tablet if the phone is not within reach. Do note that this call-forwarding function is only supported on the Galaxy Tab S tablets (Wi-Fi only and LTE models), the Galaxy S5 and Note 3 S4 smartphones. Both devices also need to be connected on the same Wi-Fi network. In the absence of a Wi-Fi network, both devices can connect using Wi-Fi Direct. 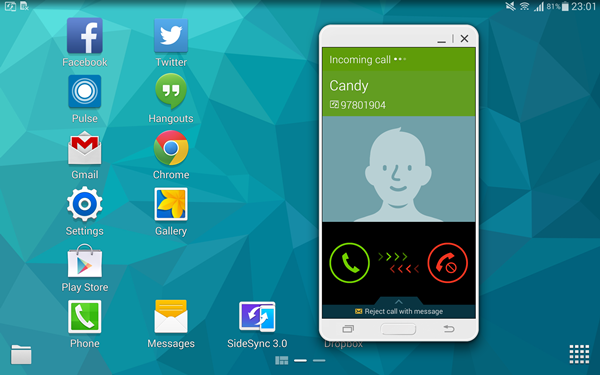 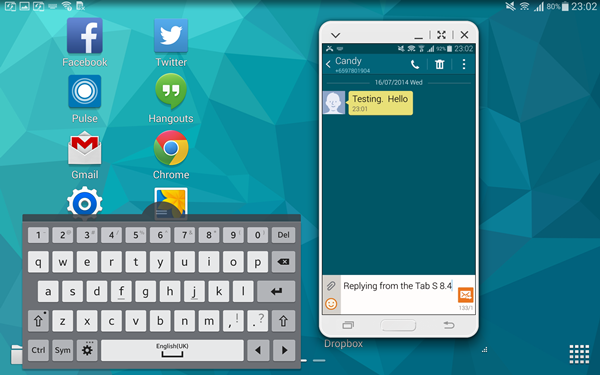 On a side note, Apple is also introducing a similar feature called Handoff in its upcoming OS X 10.10 Yosemite where you can read, reply, accept and reject text messages or calls from your Mac when your iPhone is not easily accessible. The call-forwarding feature and ability to reply to normal text messages (not iMessage) on the Mac only works with the iPhone though. 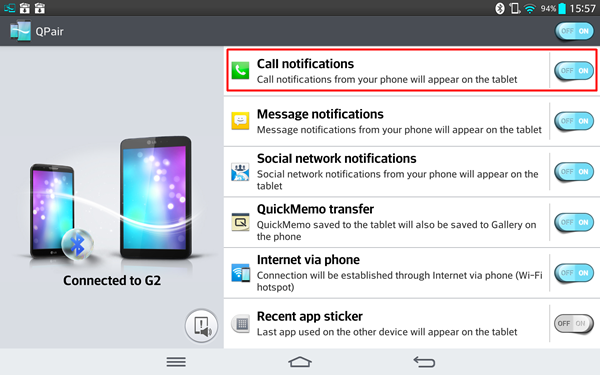 The LG G Tablet 8.3 is only available as a Wi-Fi version in Singapore, hence it cannot be used to make cellular calls. While it cannot make calls like a phone, the G Tablet 8.3 can alert you to incoming calls and text messages via LG's QPair app. Available for free on Google Play Store, the QPair app is compatible with LG and other Android devices running Jelly Bean OS. Do note that not all features of the QPair app are supported by all phone models. 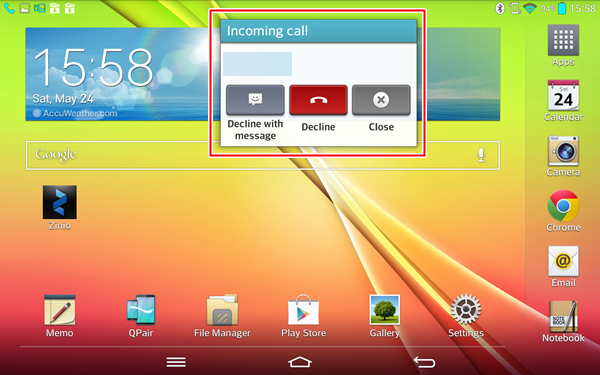 When you pair (via Bluetooth) the G Tablet 8.3 with a supported Android smartphone, you can see call notifications on the G Tablet 8.3. You cannot answer the call on the tablet, but you can decline the call with or without a message. It has a front-facing 1.3-megapixel camera, which can make video calls via third party apps such as Google Hangouts.

Tablets are used by consumers on the go for productivity tasks and entertainment needs. This is where data connectivity comes into play. In this section, we explore the data connectivity options on the three tablets. The iPad Mini and Galaxy Tab S 8.4 are available in two variants - Wi-Fi only and Wi-Fi + 4G LTE - while the G Tablet 8.3 sold in Singapore only comes as a Wi-Fi model.

In terms of Wi-Fi connectivity, Apple and Samsung claim that their tablets can deliver extremely fast download speeds. The iPad Mini has dual-band (2.4GHz and 5GHz) 802.11n Wi-Fi and MIMO (Multiple Input Multiple Output) technology, which can deliver download speeds of up to 300Mbps.

Similarly, the Galaxy Tab S 8.4 supports dual-band (2.4GHz and 5GHz) 802.11ac Wi-Fi and VHT (Very High Throughput) 80MHz MIMO transmission. It also has a feature, Download Booster, to enhance download speeds by using both Wi-Fi and mobile data concurrently. To find out how Network Booster works and fared in reality, do check out our review of the Galaxy Note Pro 12.2 where we first tested it.

When it comes to 4G LTE connectivity, the iPad Mini sold in Singapore supports 14 LTE bands (two of which are used by all three telcos). In comparison, the Galaxy Tab S 8.4 only supports six LTE bands (2600, 2100, 1800, 900, 850, 800MHz). What this means is that the iPad Mini can connect to more LTE networks around the world. For consumers who often travel overseas, this is a major plus point.