Battery life is still one, if not, the most important criteria for consumers. What's the point of having many features in a tablet that cannot last? Our standard battery test for mobile phones has the following parameters:

Despite having the largest battery capacity and smallest display, the iPad Mini did not last the longest; it managed 6 hours and 17 minutes. While it lasted 24% longer than the LG G Tablet 8.3, the Galaxy Tab S 8.4 takes the cake with its record breaking time of 10 hours and 45 minutes. That's more than twice the mileage of the LG tablet and 71% better than the Apple slate!

If we take a look at the Power Consumption chart, the iPad Mini consumed the highest power draw at 3.86W. This is rather surprising as it is not the tablet with the highest pixel density. Ironically, the Galaxy Tab S 8.4 had the lowest power consumption thanks to its power efficient Super AMOLED display.

With their 8-inch form factor, these tablets are considered very portable compared to their 10-inch counterparts. How do they fare within their own category? Well, our Portability Index can determine that by calculating its battery life to (weight x volume) ratio. Not surprisingly, the Galaxy Tab S 8.4 easily outranked the other two tablets as it has the longest battery life, along with the thinnest and slimmest design. These aspects combined with its light weight propel the Samsung Galaxy Tab S 8.4 to the top of our portability index.

The iPad Mini uses Apple's proprietary Lightning port, which means that you have to use the Lightning cable to charge the tablet. It is certainly not as convenient as the LG and Samsung slates, where a micro-USB port is used. While you can use any micro-USB cable to charge the two Android tablets, the rate of charging differs depending on your power source which we've highlighted in this article, "USB Charging for Mobile Devices". However, the main point is that using a standard USB cable means that the Samsung and LG tablets have no shortage of options for charging the device as the connectivity standard is omnipresent.

Manufacturers sometimes have to sacrifice on battery capacity to make 8-inch tablets small and light. As a result, battery mileage may not be as good as the 10-inch counterparts. Some tablet makers get around the problem by developing power-saving features. Now, let's take a look at what each tablet has to offer:- 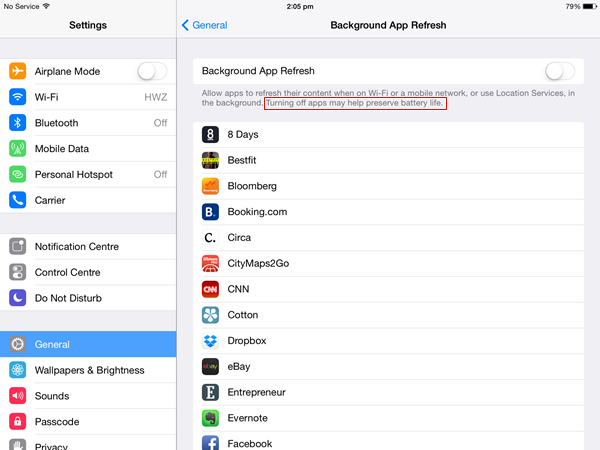 Apple does not have any power-saving feature(s) on the iPad Mini. It prefers to exercise strict control over the activity of apps running in the background and optimizing the hardware/software aspects to achieve a reasonable level of battery performance. There have been battery draining issues with iOS 7 and we've compiled a list of 7 battery saving tips that you can consider.

Samsung has been an avid user of power saving features for its range of mobile devices. Its most aggressive move is the inclusion of the Ultra Power Saving mode on the Galaxy S5 flagship smartphone, where all unnecessary features such as Bluetooth, Wi-Fi connectivity and camera functionality are disabled. It even switches to a black and white theme for maximum power saving as AMOLED displays do not need to light up pixels to represent black, hence it is easier on the battery.

This feature is also preloaded on the Galaxy Tab S 8.4 alongside the Power Saving mode which limits the maximum performance of the processor, blocks background data access and uses much lower power for the display. Judging from the amazing battery mileage of the Galaxy Tab S 8.4, these two features may hardly be used at all. Also, while it makes sense for a phone to have such aggressive power saving features just so that the person can remain contactable, it probably doesn't matter as much for a tablet because almost all of what's consumed on the tablet is via the internet or apps relying on the internet. There are of course apps that are totally self contained like some games, so that you can entertain your kids for a little longer before required the mandatory charge. 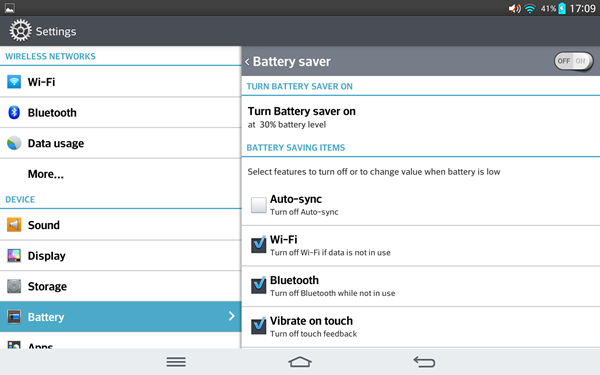 LG has a similar strategy as Samsung; its Battery Saver mode is present in both its smartphones and tablets. You can preset to enable it at 10%, 20%, 30%, 50% of the tablet's remaining power level or even immediately. You also can select the features to be turned off when Battery Saver mode is enabled.

For example, you can determine the screen brightness (10%, 20%, 30% or 50%) and screen timeout (15 seconds, 30 seconds or 1 minute). Touch feedback, Bluetooth and Wi-Fi connectivity can be preset to turn off when the battery is low too.