Modern Compact Smartphones You Can Count Upon

It goes without saying that the trend these days are ultra large smartphones and they've been steadily increasing in size for the past two years. While Apple increased the display size of its iPhone from 3.5-inch to 4-inch last year, Android OS vendors are increasingly pushing the boundaries by blurring the lines between smartphones and tablets.

But those are just the top-tier devices costing close to S$1000. Don't forget that a significant number of phone options are available below the 5-inch screen size mark that's targeted at the mid-range segment. These phones may not be as powerful as the high-end models, but they often offer most of the important features while having a distinct advantage over their larger counterparts - one-handed usability.

According to a Strategy Analytics report published on 30 April 2013, the most preferred smartphone screen size in the second half of 2012 is between 4.2-inch and 4.7-inch, with 4.5-inch as the most preferred size. With this in mind, we decided to round up various mid-range smartphones based on the following criteria:

This led us to these five smartphones - the HTC One SV, the LG Optimus F5, the Nokia Lumia 820, the Samsung Galaxy S4 mini and the Sony Xperia SP. Now, let's check out how the phone specs compare across the board:- 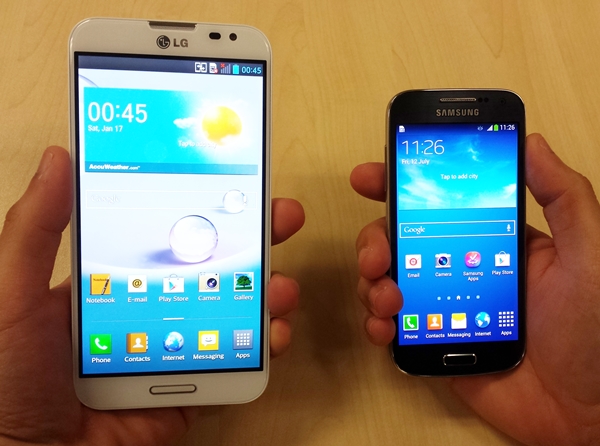 The premise of this shootout article is not to discredit large smartphones with displays 5 inches or larger, but rather, we would like to help the many consumers who find such large phones too big for easy handling and are deciding between the slightly more compact smartphone choices. Indeed we too share the same sentiments after having reviewed numerous phablets. When we returned to reviewing these five compact smartphones (comparatively speaking), our hands and fingers were relieved as needn't perform hand-gymnastics to operate these devices!

It's surprising how fast standards evolve as just a year ago, devices with a 4.3-inch screen were considered a norm for the upper-range of phones and today, we've so many models pushing the 5-inch screen size and thus relegating the smaller screen variants as second-class mainstream affair. Fortunately, many of these upper-class mainstream phones are crammed with good functionality (such as a good imaging sensor and 4G LTE support among others) that you would be hard pressed to pursue to pursue the premium models unless you need the bigger and higher resolution screen. So without further ado, let's check out what the five phones have to offer in the following few pages and find out who's the best among them.