Shootout: From 0 to 100, the fastest charging phones available

Which phone is the fastest charger?

For this shootout, we've selected a wide variety of smartphones with fast charging capabilities, including flagship smartphones and phablets, as well as mid-range options. We also threw in the non-fast charging Apple iPhone 6 as a baseline measurement.

To test the phones, we completely drained their batteries, then plugged them all in to the same power strip at the same time recording their power levels after 15 minutes, 30 minutes, and finally when they reached 100 percent charge. For each phone, we used the charger supplied in the box with the phone, with the exception of the LG G4, which uses a Quick Charge 2.0 charger supplied to us by LG. The phones remained off for the duration of the charging.

The Oppo N3 was the fastest charger at both 15 and 30 minutes, which is especially impressive considering its large 3,000mAh capacity battery. Despite having by far the smallest battery, the non fast charging Apple iPhone 6 fell way behind, and was actually at a lower battery level after 30 minutes than the N3 was at 15 minutes. 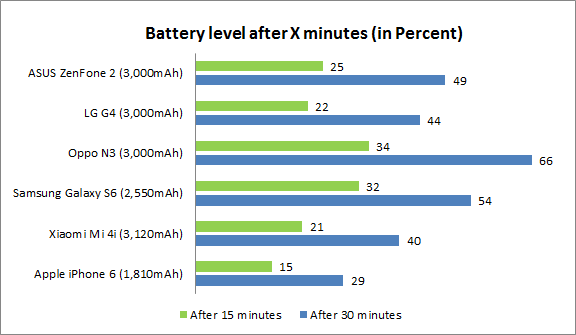 The first phone to reach 100 percent charge was the Samsung Galaxy S6, although it's worth noting that it also has the smallest capacity battery out of all of our fast charge enabled phones. The N3 was second.

No matter what fast charging technology was used, all of the phones slowed down considerably after they passed 60 percent charge. The Xiaomi Mi 4i in particular had a huge drop off, taking just 45 minutes to reach 50 percent charge, but more than two hours to reach 100 percent!

In terms of overall battery life, the Oppo N3 was also the winner, lasting just over ten hours in our standard video looping battery benchmark test.

If you had any doubts about fasting charging before, they should be gone now. Fast charging, no matter the technology used, is great and doesn't appear to have any noticeable drawbacks. We haven't heard any reports of shorter overall battery life associated with fast charging devices, and other than some extra heat generated during the charging, there are no other noticeable side effects. If you're worried about exploding phones or fried batteries, you shouldn't be, as the power regulator inside your phone ensures that the battery will never receive more power than it can handle (although do avoid suspect generic chargers offering fast charging as there's no telling if the charger itself will burst into flames). Note that it's also perfectly safe to use a fast charger with a non-compatible device - just know that it won't charge any faster than it did previously.

The winner of our shootout is the Oppo N3 and its VOOC Fast Charging technology, which can also be found in most of Oppo's other smartphones. The huge power delivery, combined with Oppo's unique battery cell structure makes it by far the fastest charging smartphone, and it doesn't seem to have any negative effects on how well the battery holds its charge either, as the N3 also had the longest battery life.