The Hargeeves siblings are back! Unfortunately, that can only mean bad things for the rest of the world.

I doubt even Netflix saw the success of The Umbrella Academy coming before its debut, but they're certainly aware of it now. The second season of this superhero black comedy is much grander in production value, and its writing seems to have been given a much needed upgrade as well. The clock is ticking, after all. The apocalypse is just around the corner. Eh, what's new for this bunch?

The first season of The Umbrella Academy ended with the smallest of cliffhangers. Having lost control of her mighty powers, Vanya shot a hole through the moon. The rest of the moon came crashing down onto earth in chunks, decimating cities and ending the world as we know it. Fortunately, Five had the brilliant idea of travelling back in time to avoid this apocalypse, and taking all his siblings with him. Probably not the best idea considering he's not much good at time travel, but he did his best under pressure.

Season 2 begins with the entire family dumped in the 1960s (damn it, Five!), scattered across a three year period. None of them have managed to find each other until Five hits the 60s, landing smack dab in the middle of another apocalypse. He discovers that the world has somehow devolved into a nuclear doomsday scenario in 1963 (with a pretty great one-take sequence), and hops back in time to stop it with his family. So, to sum up, The Umbrella Academy has to reunite in the 1960s and figure out how to stop doomsday, before returning to the present and stopping that other doomsday. And that’s just the first 10 minutes of Season 2!

Right off the bat, Season 2 is paced really well. It kicks off with a bang and then takes its sweet time in reuniting the siblings, but that doesn’t even matter considering how interesting their lives have become. Stranded in the past, most of them have had time to move on and build their own lives in a foreign place - before eventually stumbling across each other. Therein lies the drama, and Five’s frustration in having to pull them out of a time they’ve gotten fairly comfortable in.

The Hargreeveses are a complicated bunch The Umbrella Academy lives or dies by the strength of its characters, and that’s largely why I didn’t like the first season too much. Most of the Hargreeves siblings either felt shallow or outright melodramatic, with incredibly predictable stories. Vanya's turn as a villain for example, felt forced despite being so telegraphed in advance. If the rest of the family got the same treatment as Klaus, it would've been a better season.

Season 2 switches that up. Each sibling finds themselves on a rather personal journey throughout this season, and that really lets these characters stand on their own. Klaus and Ben find themselves back in town after fleeing from a cult Klaus had started around himself. Ben really steps up this season, with a memorable arc that blossoms in the last few episodes. Klaus has a somewhat weaker journey in comparison, but he’s just fun to have around at this point. Luther has always been interesting to me. He’s the group’s moral compass in many ways, but often gets relegated to dumb muscle with eyes for his adopted sister, Allison. His interactions with Vanya this season are a highlight, as he grapples with the way his family behaved towards her in the past. I won’t spoil what Allison’s up to - but let’s just say that she’s living a full life, and one that’s made it complicated for her to leave the 60s.

Diego starts off the season in a mental facility (of course), but the hotheaded knife-thrower soon finds himself in the weeds of an organisation Five once had ties to. Vanya loses all memory of her past life after stumbling onto a street and getting hit by a car - and that might actually be for the better. The most downtrodden sibling of the bunch gets a lot of focus, which results in some of the most emotional story beats this season has to offer. Season 2 really handles her character well, pushing her back into the family in a believable way. The Umbrella Academy has finally lived up to its potential, in my opinion. Watching this scrappy family of superpowered beings bicker their way from one apocalypse to another finally feels good. The cast has so much chemistry with one another, and watching different combinations of siblings go on adventures together is so much fun. An alcohol-filled outing with Klaus, Vanya and Allison comes to mind - proving that this show is at its best when the family's together.

What’s really given this season a leg up is its writing. All of a sudden, The Umbrella Academy is unpredictable. It’s smart, funny and dramatic without veering into cheese. In Season 1, Vanya turning out to be the big bad was groan-inducingly predictable, but Season 2 keeps you guessing most of the time. How are things going to end for the gang? What caused the apocalypse? What happens when the family discovers that their dead father is still alive in the 60s?

It’s not all perfect, of course. Series newcomer Lila brings the melodrama this season doesn’t need, and her plotline is something of a blemish on an otherwise great run. A trio of assassins on the hunt for The Umbrella Academy don’t really become interesting until past Season 2’s halfway point, despite being so prevalent in its story. These are easily overlooked flaws however, and the show remains more entertaining than ever despite them. 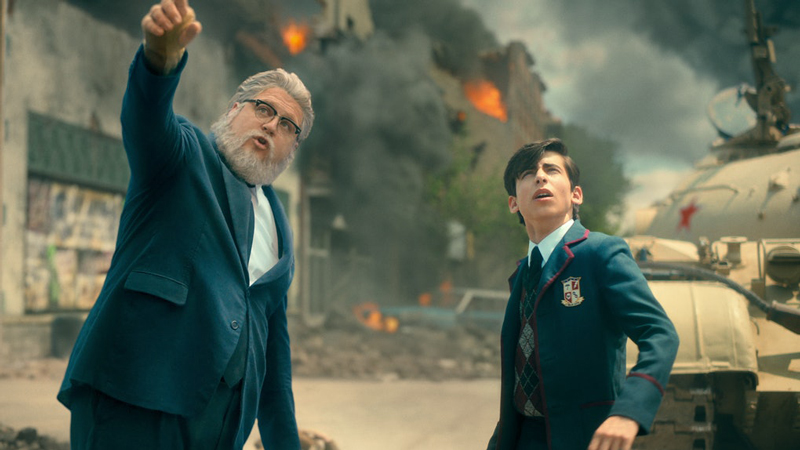 As someone who didn’t originally fall in love with The Umbrella Academy like everyone else did, Season 2 was a really pleasant surprise for me. I came out of it loving these characters and their journeys, and their shared bonds most of all. The story unfolds at a rapid pace, taking twists and turns as it builds up to an eye-widening conclusion. The series can finally stand toe to toe with Marvel and DC’s best offerings, and this is definitely worth a weekend binge.

But, as far as X-Men clones go? Doom Patrol is better.