Seagate Backup Plus Fast vs. Western Digital My Passport Pro - Battle of the 4TB Giants

Since the My Passport Pro was designed for use with Macs, we used a Late 2013 15-inch MacBook Pro with Retina Display as our test system. Our MacBook Pro has the following specifications:

To complement the benchmarks, we will also be conducting a timed run to see how long it takes to transfer around 15GB worth of videos, music, and photos. We added results from the Western Digital My Passport Slim, winner of our Tech Awards 2014 Best 2.5-Inch Portable External HDD category to act as a baseline reference.

Looking at the graphs for AJA System Test and Blackmagic Disk Speed Test, it is clear that the Seagate Backup Plus Fast was the quicker drive, by around 10% to 15% overall. In our file transfer timing test, it was about 18 seconds or 20% faster, which is significant. This goes to show that for mechanical hard disk drives, even in faster RAID 0 configuration, the USB 3.0 interface provides more than sufficient bandwidth.

That said, we were interested to find out why the Western Digital My Passport Pro was considerably slower. Upon further investigation, we found that the drives in the My Passport Pro actually spun slower at 5200rpm instead of the more common 5400rpm. This could have explained why it was consistently slower than the Seagate Backup Plus.

Obviously, both drives were significantly quicker than a regular 1TB 2.5-inch portable external hard disk drive such as the Western Digital My Passport Slim.

Although both drives offer 4TB of storage, their performance as well as features and price differ quite greatly. The Seagate Backup Plus Fast is appreciable faster and with a recommended retail price of S$449, it is also significantly cheaper. And at this price, it costs about twice as much as a typical 2TB 2.5-inch portable hard disk drive, so it is not excessively pricey. It is also complemented by Seagate’s excellent Dashboard backup utility that now also offers backup of your iOS and Android devices. Also, unlike the Western Digital My Passport Pro, the Backup Plus Fast works on both PCs and Macs. All in all, it is a competent package.

However, users do need to take note of a few things. For one, you need USB 3.0 connectivity to take advantage of its speed. Additionally, be prepared to sacrifice up to two USB ports if yours does not provide it with enough power (there's no power jack to connect to a wall socket). This is very likely the case if you intend to use it with an older system that only has USB 2.0 connectivity. Finally, it is by default configured in RAID 0 and this cannot be altered, and what this also means that if one of the two drives fail, you will lose all your data. 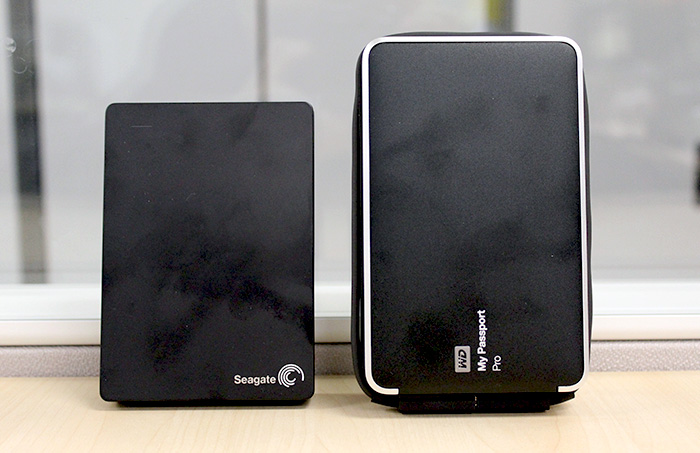 Recommending the Western Digital My Passport Pro is a bit harder considering it's slower and significantly more costly at S$699, though there is a smaller 2TB version that's retailing for S$499. However, the My Passport Pro is really for power users and enthusiasts. Its ability to be configured in RAID 0, 1 or JBOD gives it extra versatility. Users can configure it in RAID 0 for performance, or in RAID 1 for extra security and redundancy.

Sadly, it is let down by the fact that it only has a single Thunderbolt connector, which means it cannot be daisy-chained. This could prove to be problematic to certain MacBook systems which rely on Thunderbolt for video output and only have a single Thunderbolt port - such as this reviewer’s Late 2011 15-inch MacBook Pro. However, for users with no use for their Thunderbolt ports, the My Passport Pro will be much welcomed - especially MacBook users since they typically only have two USB ports that may already be taken up by other devices.

All things considered, Western Digital’s decision to go with offering Thunderbolt connectivity is really a double-edged sword, but it really would have been ideal if they had provided the My Passport Pro (or offered a model) with two Thunderbolt ports so that it can be daisy-chained.

At the end of the day, which one of these drives is right for you depends very much on your personal needs and requirements. The Seagate Backup Plus Fast is OS-agnostic, more affordable and faster, whereas the Western Digital My Passport Pro offers greater flexibility and redundancy, but at a much higher price.