The science of sound: An interview with Creative Technology founder Sim Wong Hoo

The science of sound: An interview with Creative Technology founder Sim Wong Hoo

Note: This interview was first published in the July 2017 issue of HWM. 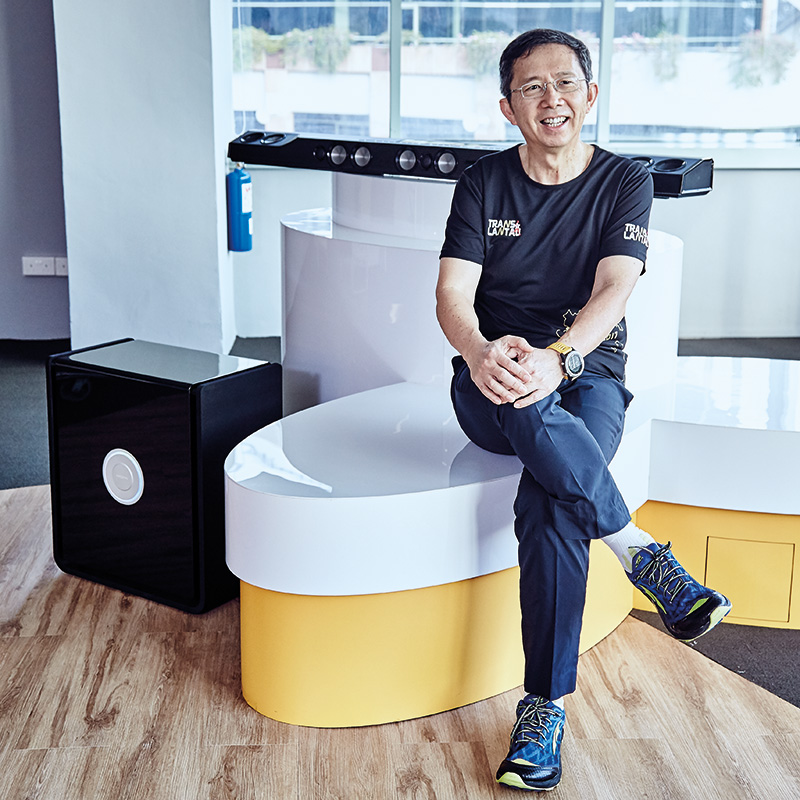 How do you create products that appeal to everyone?

Well, our latest product – the Sonic Carrier – actually solves the dilemma of having to cater to two worlds.

There’s the high-end audiophile world – people who want the best in music, which is very different because they want it to be pure, unadulterated. And then there’s movies - to get the cinema experience with all the booms and bangs, hearing everything from all directions.

These two worlds have been in conflict. You cannot put them together and you need two expensive systems with many cables running around. Your wife will hate it, it will mess up the place…

We’re able to resolve this with a very elegant one piece solution place right in front of your television with a wireless subwoofer that you can put anywhere. We put the two together and wives will love it because of the design. It’s very wife-friendly, what Americans call the “Wife Acceptance Factor”.

It moves beyond the home cinema. We’re literally bringing the cinema to your home.

How does Creative stay creative then? What’s the greatest difficulty you face in coming up with something new?

The greatest difficulty is to convince our own people to believe. Especially when it comes to a technology. It’s science, and it’s not creative. Engineers are known to follow the rules, so their first reaction is always to say that it can’t be done. But ideas usually come from some random source, so there won’t be a precedent. An idea is just a spark. You have to find a place where the spark will work so that you can create something the world hasn’t yet seen.

What do you think of the latest trends like 360o audio and multiroom audio then?

We had that twenty years ago, so it’s surround, but that’s just a dirty term. Basically, the physics here are quite well-known. It’s tricking your ears. So this is very well-known within us. People are taking out all this old stuff and rehashing, but it’s just tricking your ear. 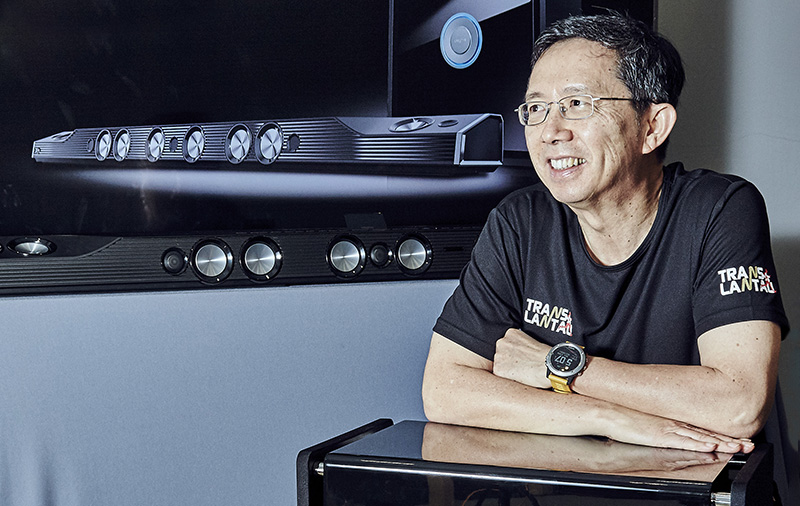 Well, how does that work?

It’s like this. We only have a pair of ears. You don’t have ears behind you, so you can only hear from two inputs. Theoretically, I can put two speakers in front of you and create any sound that you can hear, because you only have two ears. What’s the difference between sound in front and sound behind?

The sound from behind goes through a filter, whereas the one from the front goes straight into your ear. That’s called the Head Related Transfer Function (HRTF), and that changes depending on where the sound is coming from. The problem is, everybody’s HRTF is different, so if I can design a HRTF that suits my ear, then I can trick my ear. There’s a learning process. The first time you listen to it, you learn. Just like the first time you hear your friend on the phone, you won’t recognize his voice.

Have you tried that before? It’s because our sound is different over the phone. It’s filtered, so we have to relearn that sound. Then the next time we speak on the phone, you’ll remember and know who it is.

So in the same way, you need to learn that the sound is behind you. So the next time you hear that muffled sound, you’ll know that it is behind you. But actually, it’s in front. The challenge then, is to design the most common HRTF, because you can’t tune it for everyone who comes along.

Plus, with speakers there is leakage, so it is far more challenging to present direction as you need to cancel out the sound from the other channel.

Would you say that creating audio products is a lot more difficult then?

Oh, it’s a lot more difficult. With visuals, it’s just going down to the pixel and making it finer and brighter. It’s a brute force technology; just throwing more pixels and getting more fine-grained. Audio is a lot tougher, but it gives you the more immersive experience.

A lot of times when you find yourself moved to tears, do you know what makes you cry? It’s the soundtrack. That music is important. I remember Lucas once did a test where they asked people to try two different versions of a game and asked them which had better graphics. Turns out both had the same graphics; the one that most people said was better just had a better soundtrack. So it’s the audio that gives you the better perception. But most people don’t know this!

Audio is the emotive part that grabs your heart and touches your soul, so you if get a good audio, you can really be immersed in the movie.And that’s what we’re talking about. But it’s very hard for marketing people to talk about it, and even harder to try and demonstrate it. Imagine how difficult it is? Until I bring you to a showroom where I can put my speakers in front of you, you won’t know it.

We’ve got to go to the shows/exhibitions and create a soundproof room so people can walk in and listen to our speakers. There’s a limited number of people who can test it at every show and you know what our marketing cost is? $100 per head. That equates to $50,000 and I can only cater to about 500 people in one show, so that’s the kind of marketing dollars I’m talking about. But there’s no other way they can know. You can’t effectively sell sound with words. 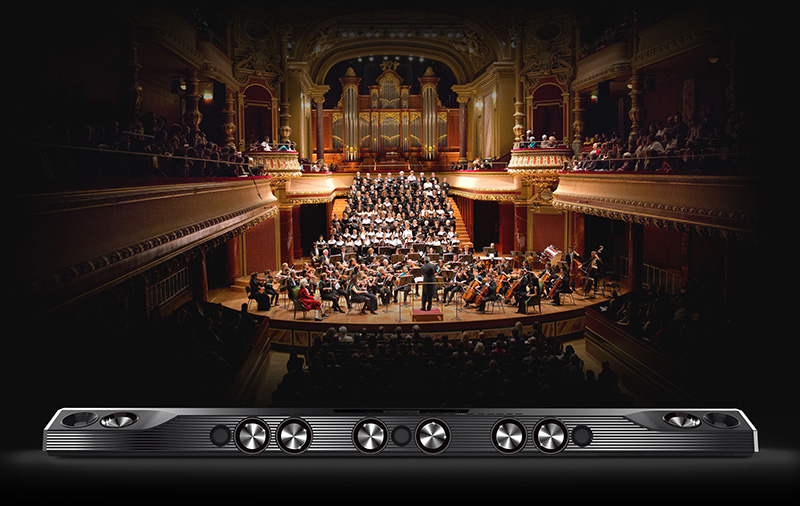 Do you have a target customer in mind for the Sonic Carrier?

Well, first of all you need to have the means, because it’s not a cheap product. It has to be something that you’re considering already. It’s not something you just come in and buy without planning to do so. Unless you’re super rich of course.

But if you have a home theatre in mind, and you’re looking for something to put in during the renovation, then this saves you all the hassle of running wires, plus the wife likes it. We have a lot of customers like this. That’s easy, because it’s an instant solution.

But audiophiles already have their own system. They’re used to it and they are also listening to music more than they listen to movies. 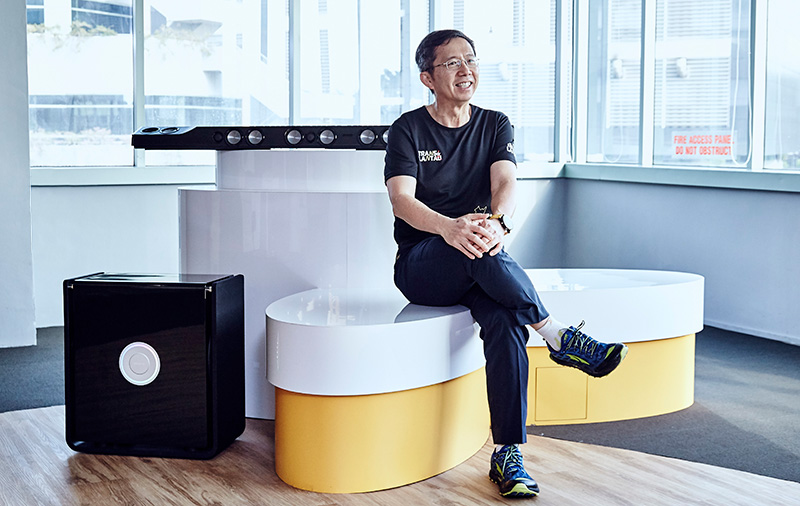 So how do you change their perceptions to get them to start using your product?

I don’t have to. I need to win them over so they say “good”. I don’t need them to buy because they are a minority, but they are vocal. To them, the price is nothing. $7000 is cheap! But, it’s comparable and they like it. That’s important, because they will have their friends asking them for recommendations and this will be one of it. So we are reaching out to them; we want them to endorse it!

What we’re trying to tell regular people is that you can get into the audiophile world. And you can share it with your friends.

But everyone has different tastes...how do you handle that?

In terms of taste, we believe we can cater to almost everyone because we have the processing power. "Taste" a lot of times is EQ (equalization). We have enough headroom for these audiophile pieces, so what is left is just the tuning. So we give you the tools, and you can do all the tuning yourself or find some expert to help you do the tuning, so whatever taste you want, you can tune.

In the end, it’s just Physics. It’s hard to sell as a single product, but if you make it into a feature, people can choose whether or not they want to enable it. The key thing is, we’ve given this product enough headroom to process all of it.