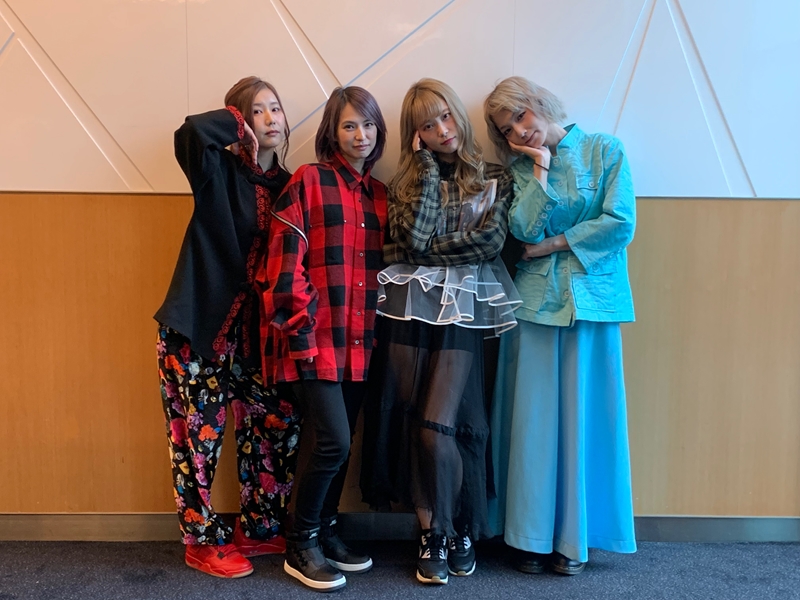 Ever tuned in to anime series like Bleach or Fullmetal Alchemist: Brotherhood (FMA: B)? If so, then the popular J-rock girl band SCANDAL shouldn't be foreign to you. Made up of 4 former high school classmates: Haruna Ono, Mami Sasazaki, Tomomi Ogawa and Rina Suzuki, the band first entered the music industry in 2006, and released their major debut single, "Doll", in October 2008.

In the 10-odd years since the band was formed, they've garnered a dedicated following that continues to grow significantly every year, and many of their older tunes, such as Shunkan Sentimental from the aforementioned FMA: B are still enjoyed by anime fans around the world till this day.

More recently, the band was in Singapore as part of the C3 Anime Festival Asia performance lineup, but we managed to sneak in a short interview with them, which is an opportunity you don't see every day!

HWZ: First off, thank you so much for taking time off for this interview, everyone. We understand it's a really hectic period, considering you're due to perform later tonight. As such, let's cut to the chase!

Q: It's been more than a decade since SCANDAL first got together, so how do you think the band has changed since then?

A: Hmm...that's a tough one. But we think that in order to see what's changed, we have to see what hasn't as well. For one, our friendship continues to burn the same as it did thirteen years ago, if not more. As for what's different, the experience is probably the main item - we've grown stronger and wiser, both as musicians, and people as well.

Q: Earlier this year, the band set up its own music label called "her". What's the experience like running the label, and what's the biggest challenge you've faced in this venture so far?

A: As with all new ventures, it's definitely exhilarating and a little scary at the same time. Meanwhile, the biggest challenge managing the label thus far was essentially similar to the biggest obstacle we've faced as a band in general: having to manage everything on our own. It's the curveball of having to take on that "extra element" that really makes the challenge.

Q: On that topic, why did SCANDAL settle on the name "her"?

A: The main angle we had for the label was one where we could embrace our femininity, as well as create an environment where we could continue to make music and express ourselves. Having this "home" of sorts where we can belong also motivates us to express our "raw emotions" through our music, and honestly, our way of expression might not have been the same without it.

Q: On a more light-hearted note, what's your fondest memory of Singapore?

A: Unsurprisingly, it's our trip to Sentosa, as well as the weather, which isn't something we're really used to! The latter bit has a funny side to it too, actually: back then, whenever we performed in Singapore, it was always raining, and someone suggested that we were bringing the rain with us! However, in recent years it hasn't rained so it seems that joke has finally been put to rest!

Q: Last but not least, is there any song covers that the band might find fun to perform?

A: To be honest, we've never really given this much thought! But off the top of our heads, we'd probably go with the opening for Hamtaro, "Tottoko Hamutaro Uta". It's not only a really cheerful song, but it's also one of those tunes you'd never expect to be performed on stage. So yes, it would definitely be an interesting one for us to do!

Once again, we'd like to thank SCANDAL and their crew for allowing us this opportunity, and we hope all concert attendees enjoyed their amazing performance! On that note, don't worry if you missed them at this year's AFA, because they've announced that they'll be back in Singapore next year for their "Kiss in the Darkness" world tour!

Speaking of interviews, we also had a chance to speak to Azumi Waki and Reina Ueda, the seiyuus behind the lovable sister duo Null & Peta, from the anime of the same name. We'll have that up soon - stay tuned!