Update, April 11, 2017: Samsung has announced the local pricing and availability of its 2017 QLED TV series. More details, including launch promotions, can be found here. 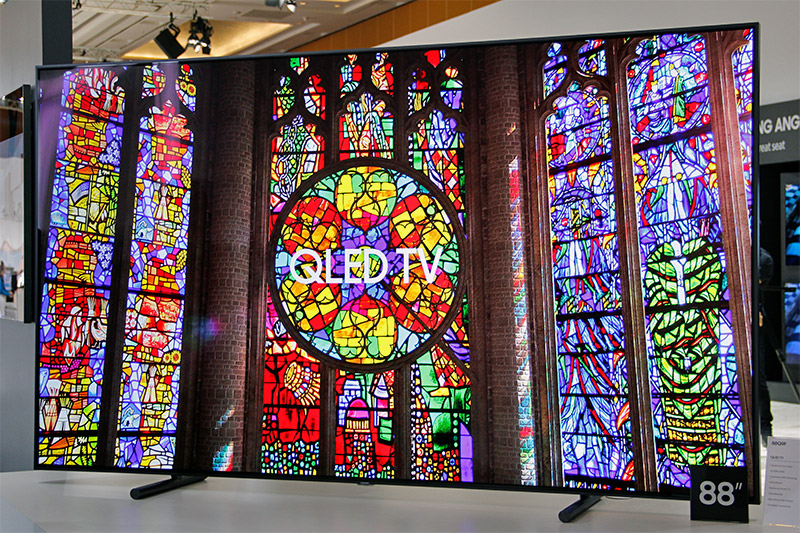 Taking the fight to OLED

At this year’s CES, I noticed that several TV makers have joined LG in making OLED TVs. But that list doesn’t include global TV market leader Samsung, which has remained steadfast to its quantum dot-enhanced 4K LCD TVs that it calls SUHD TVs.

Actually, scratch that. If you want the latest and greatest TV from Samsung, forget the term “SUHD”. From this year on, Samsung’s flagship 4K TVs will be marketed as “QLED” TVs.

Before we delve deeper, let me be clear here: Samsung’s newest QLED 4K UHD TVs - which are further split into the Q9, Q8, and Q7 series - are still very much LED-lit LCD TVs enhanced by quantum dots, which are these very tiny semiconductor particles that can do magic to a TV’s brightness and colors. But because the improvements in this year’s QD TVs over last year’s models are so significant, Samsung feels it warrants a moniker change. Its one-letter difference to the word “OLED” is probably on purpose too, to further allude that QLED’s picture quality is on a par with (if not better than) OLED.

So, what’s so special about Samsung’s 2017 QLED UHD TVs? For one, the quantum dots used in them now sport a metal shell and core for improved color purity and stability. And the results of that are even higher brightness and better color performance. According to Samsung, the new QLED TVs have a peak luminance of between 1,500 and 2,000 nits (the flagship Q9 is the one that can hit 2,000 nits) and are able to accurately display the DCI-P3 color space. Not only that, they can reproduce 100% color volume at different luminance levels, compared to around 70% or so for a typical OLED TV. Based on my quick eyes-on with some demo and HDR footage, the QLED TVs do exhibit less clipping of highlight details. 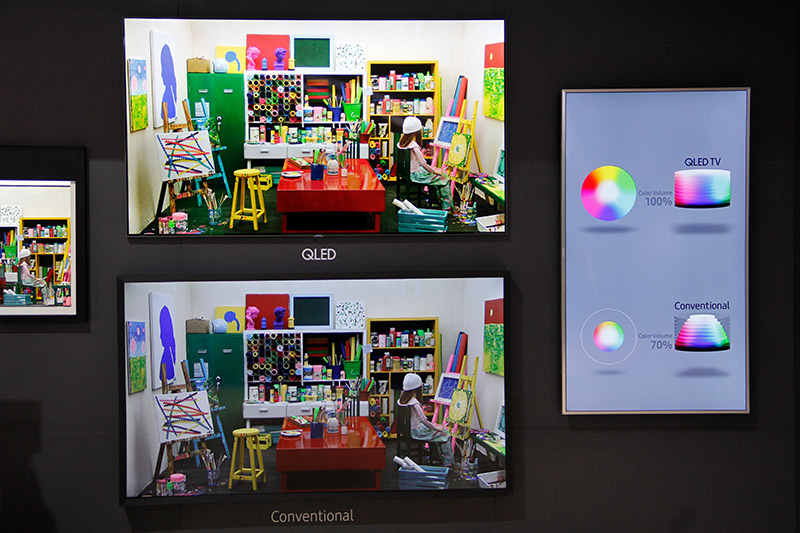 One minor gripe I had with last year’s KS9000 was the panel’s slightly narrow viewing angles, because they impacted off-axis viewing enjoyment. The QLED TVs seem to handle this much better. In addition to the continued use of black matrix masking and treatments to the VA LCD panels to reduce screen reflections (including an on-screen ultra-low reflectance film), I also understand that Samsung has introduced a new sub-pixel arrangement, and this plays a big role in the marked improvement of the TVs’ viewing angles.

For those wondering, no, the QLED TVs still only support one HDR format: HDR10. Unlike LG, which welcomes everything HDR, Samsung says it’s focusing on HDR10 because it’s an open standard (versus the “closed” Dolby Vision standard); it’s the basis of the HDR specs in the 4K UHD Blu-ray format; and the fact that majority of the movies today are graded at 1,000 nits (which HDR10 supports), rather than Dolby Vision’s 4,000 nits peak brightness.

Of course, one may then wonder the need for the QLED TVs to hit 2,000 nits. My understanding is that low/middle dynamic range images are able to benefit from the QLED TVs through inverse tone-mapping. Also, when tone-mapping occurs to preserve highlight detail, the overall picture will still be sufficiently bright because of the TVs’ extra luminance headroom. All the aforementioned plus the inevitable arrival of dynamic metadata support in HDR10 (which Samsung says its QLED TVs are already ready for), which allows for color optimization on a scene-by-scene basis, it’s perhaps no surprise then that the company isn’t too keen to cozy up with Dolby Labs at the moment. 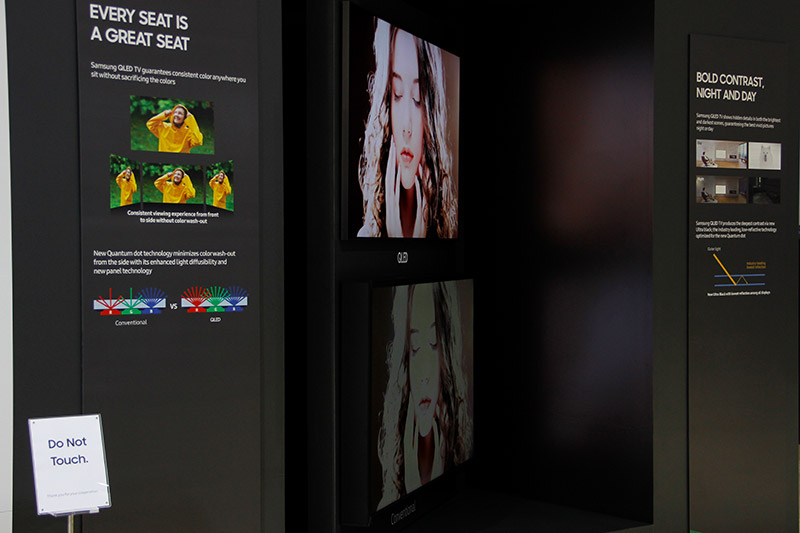 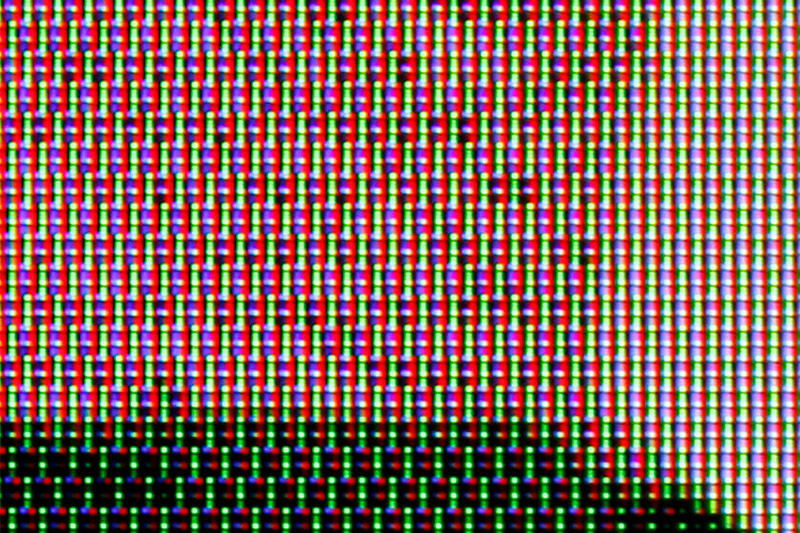 Solving the problems of cable clutter and thick wall mounts

The huge jump in picture quality aside, Samsung’s new QLED TVs also sport several design updates. One of which is the “Invisible Connection”, which is a single, transparent, fiber optic cable for transporting all the content signals from the One Connect breakout box to the TV. I like that even when the TV is on a stand, the stand has strategically placed holes to pipe out the Invisible Connection and power cables. For sure, this helps to minimize cable clutter at the back and around the TV; the only remaining problem is you still need to find a good place to hide the One Connect box that has cables hooked up to your set-top boxes. And for those of you who don’t even want to see the Invisible Connection cable, yes, it’s in-wall rated, so you can hide it in the wall. All QLED TVs will come with a 5-meter Invisible Connection cable, but there’s a separately sold 15-meter extension, for those who have their AV peripherals housed in a cabinet across the room.

Samsung has also developed a tilting “no-gap wall-mount”. The implementation is quite clever actually: instead of having the mounting parts rest on the back of the TV as well as sticking off the wall, and thus creating a big gap in between, most of the hardware is now embedded in the TV. And since you don’t need to have the mount perfectly leveled for the TV to hang straight, Samsung thinks many QLED TV buyers will choose to hang their own TV set. The no-gap wall-mount works across all the QLED series and up to 75-inch screen sizes. 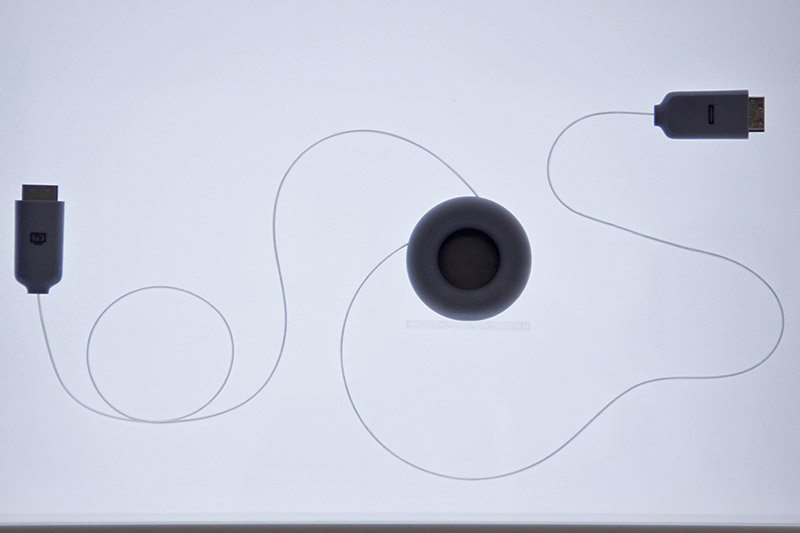 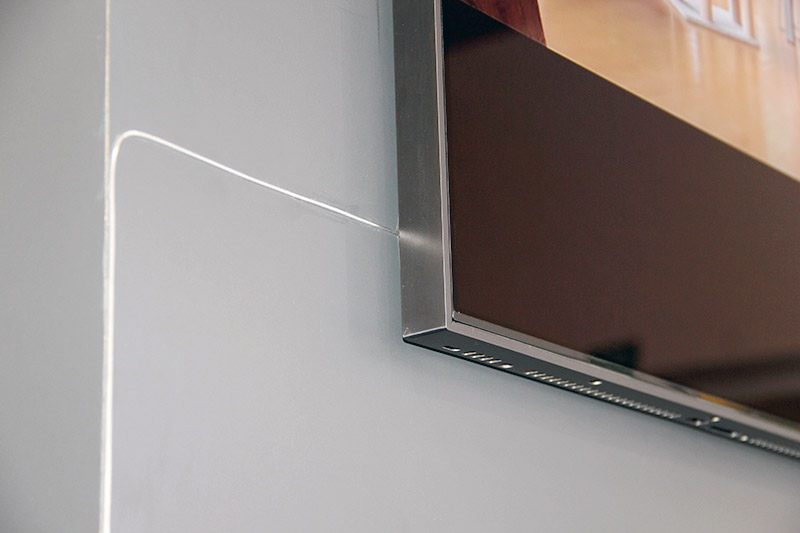 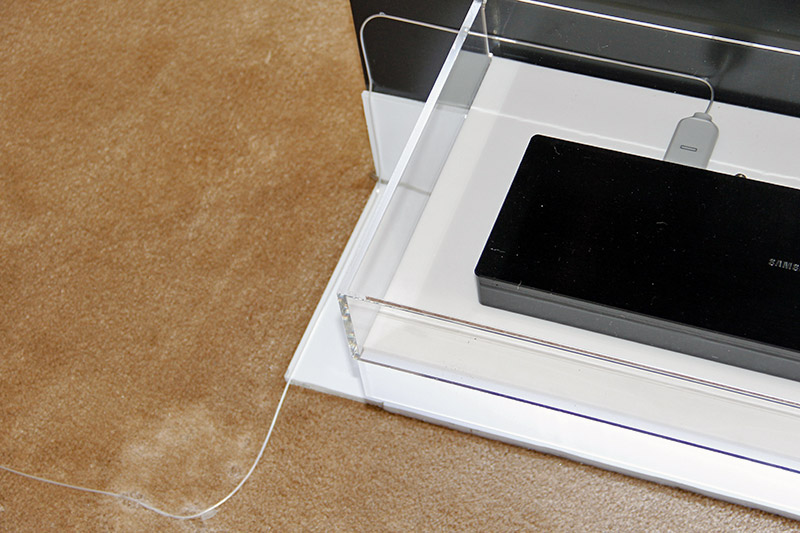 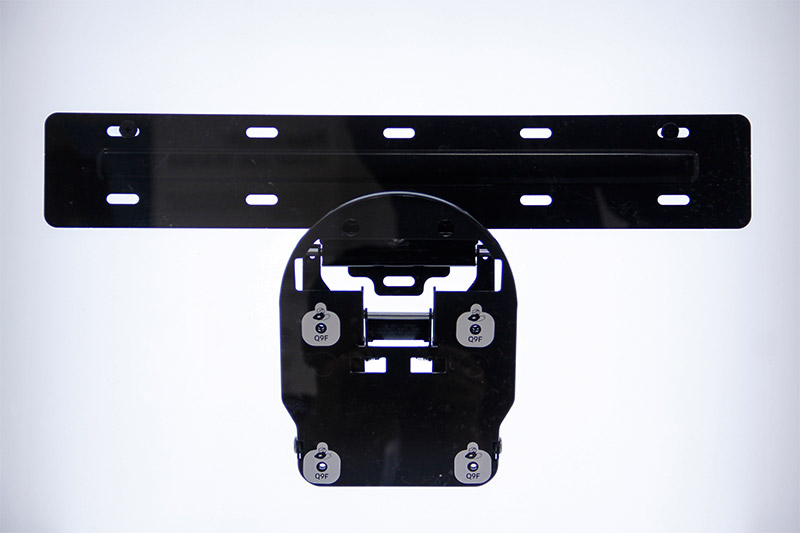 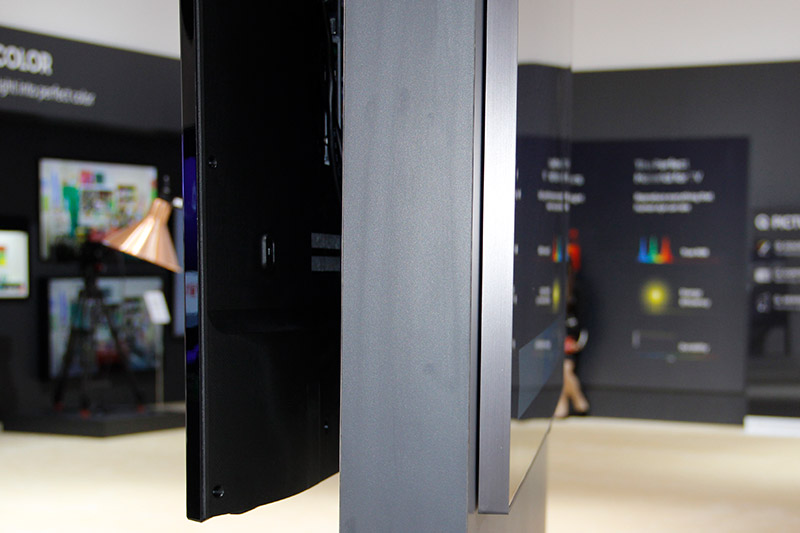 Last but not the least, on the smart TV front, we’ve a new smart remote cladded in metal, and which like last year’s remote is able to control many HDMI-connected devices from a single source. And with the new Smart View mobile app, you can now see content that’s available for the TV on your mobile device, complete with a row of icons at the top of the app that mimics the TV’s launcher bar for added familiarity during navigation. In essence, the Smart View app is another entry point for starting your favorite live TV programs and VOD services on the TV. Think of it as a Smart Hub UI extension and smart remote rolled into one and you’ll get the idea. 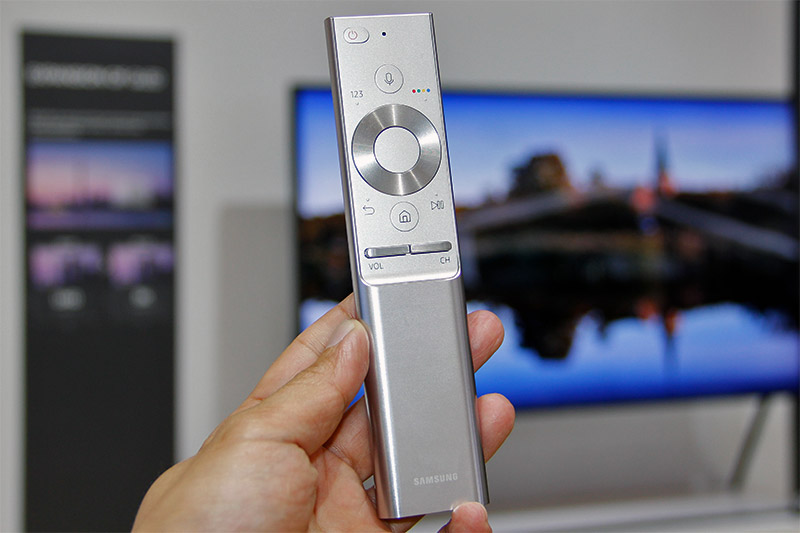 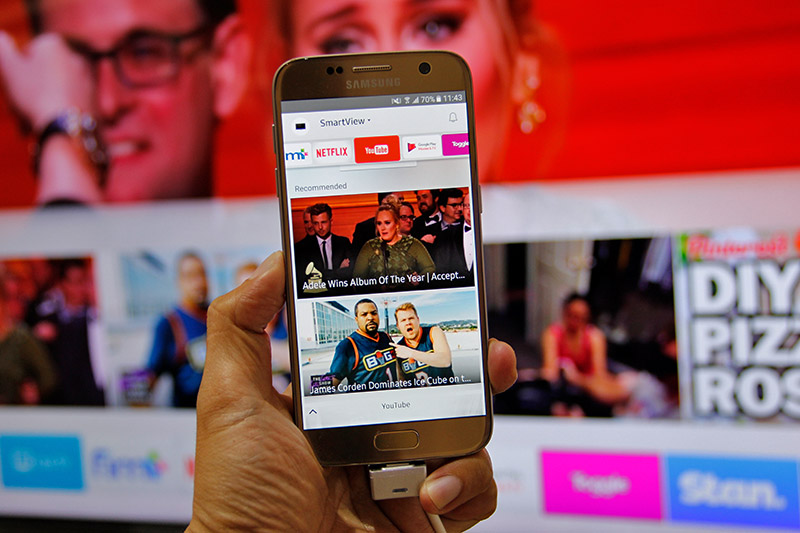 Of course, the most important question is: when and how much? At this point, I only know that the Q9 (flat), Q8 (curved), and Q7 (both flat and curved form factors) will be available starting April 2017. Prices will be announced at a later date.  For that, check out our more recent news piece for the complete details. 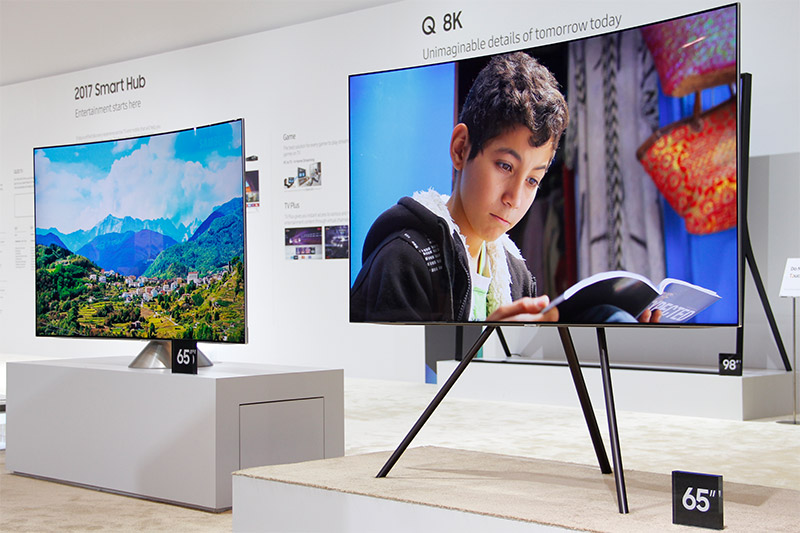 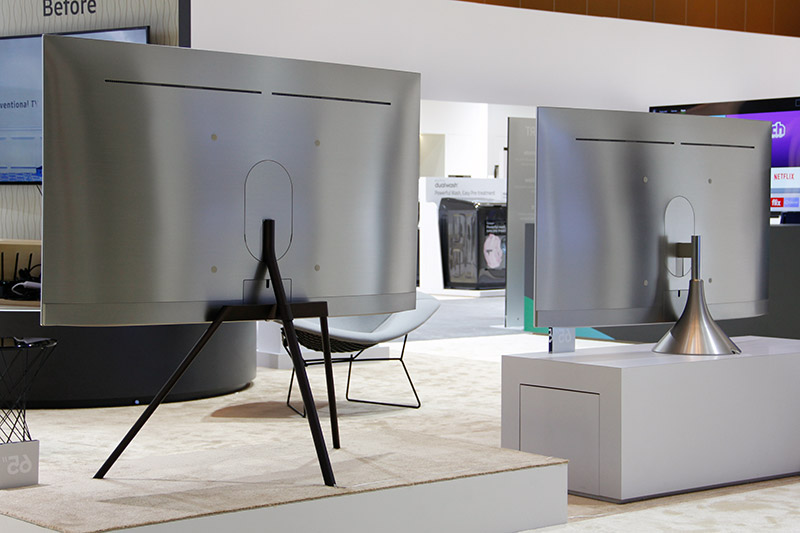 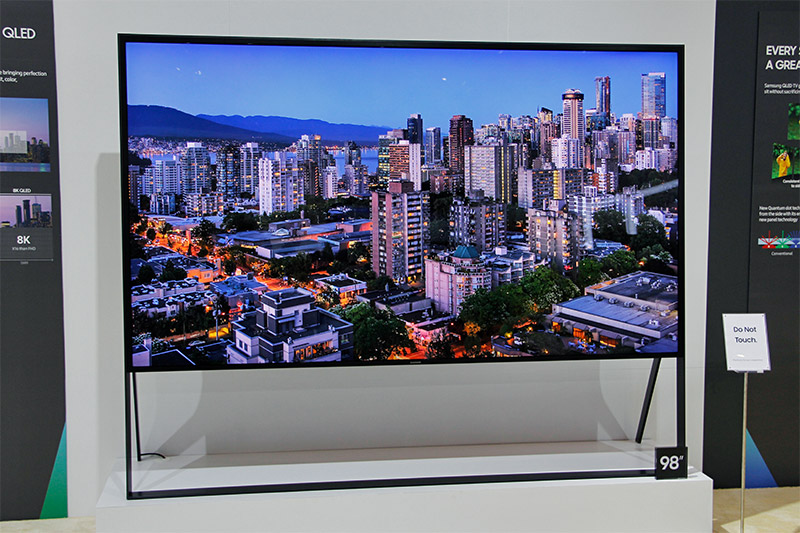 This article was first published on February 16, 2017.