Hot on the heels of Sony, who just showcased their new line-up of Bravia TVs in Singapore last week, Samsung has shone the spotlight on their new television offerings. Most of the products shown at the causal event held at VivoCity had been introduced into public consciousness at CES 2013 this year. While the curved OLED screens Samsung has been working on are not yet ready for mass consumption, the Korean chaebol is ready to release their 85-inch UHD 4K TV as well as a slew of new LED TVs. 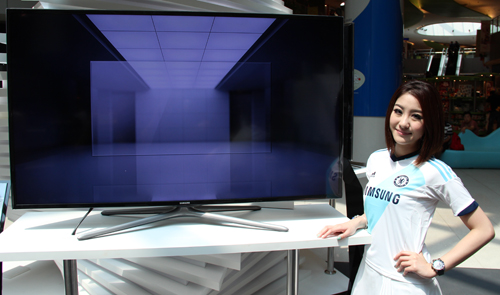 The ethos behind the new products is Samsung’s belief that the television is not only the center of the living room, but also the center of a modern day user’s life. Keeping this in mind, they have focused on Design, Interaction, Sharing and Exploration of new technology to make their new range of TV models even more indispensible to the end user.

The new televisions are instantly recognizable as Samsung products largely in part due to the chrome edges and silver bezel, which are traits shared with previous iterations. The design keyword for the new TVs is "Metaform Design" focusing on the aspects of material, form and premium feel. This latest ideology has led to Samsung dreaming up four new designs for their stands.

First up is the Gallery Stand which is available only with the Samsung 85-inch Ultra HD 4K TV. Besides framing the gigantic panel, the stand also serves to provide sound thanks to the array speakers it is fitted with. The camera for use with applications such as Skype is also housed in the Gallery Stand. 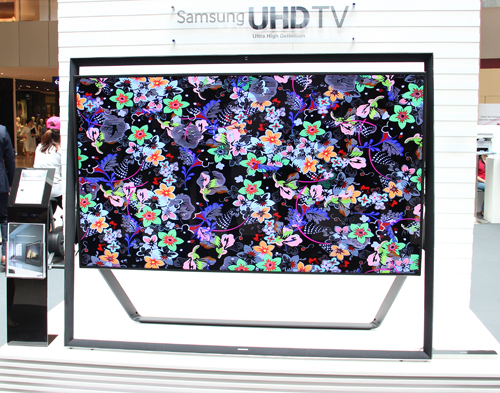 The second new addition is the Arc Stand, which helps the screen achieve the illusion that it is floating in mid-air without any support. Most of the stand is not visible from the front. However we did note that the Arc Stand does prevent the TV from achieving a close to flush contact with the back wall. 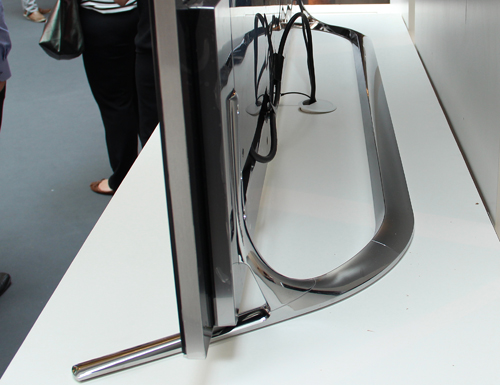 Drawing inspiration from nature, the Branch Stand does look quite spectacular from a top down view. However since that angle is normally one you will never notice your TV from, the beauty is somewhat lost. From the side view, we thought the Branch Stand resembled pigeon feet.

Finally, the conventional Samsung Quad Stand that has been around for a few years has been improved and upgraded with a smoother finish. This is now the default stand for most of the entry and mid-level models.

Over the course of the last few years, Samsung’s Smart Hub has become an extremely strong selling point for their televisions. According to third-party figures Samsung shared with use, there were approximately 65 million users of their Smart TV platform in 2012. Unsurprisingly, they have decided to continue strengthening this area to keep a hold of their supremacy. 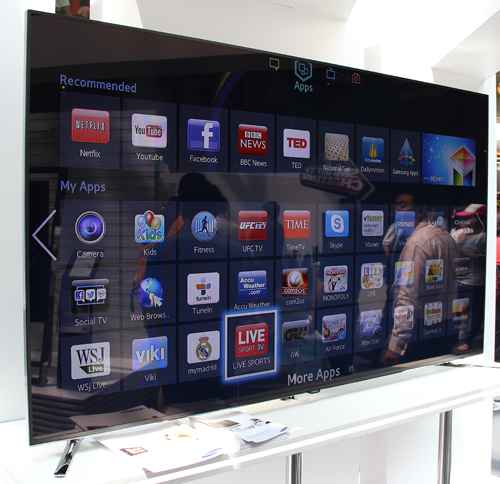 The Smart Hub has been given a complete facelift and comes with a completely new user interface. Gone is the single page layout which has now been replaced by three separate home pages. The individual pages represent the apps and key services, AllShare and connected devices and social media platforms respectively. 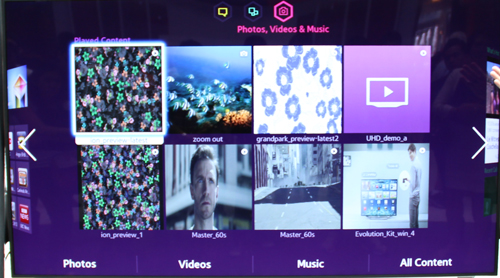 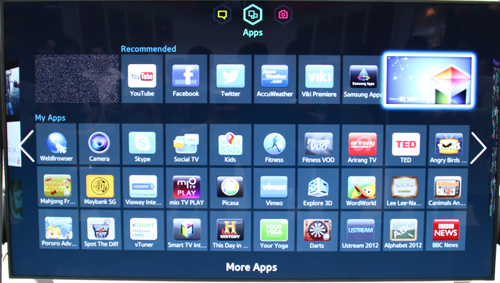 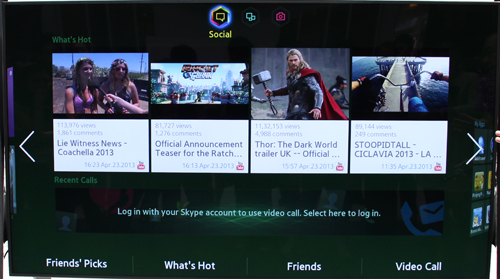 Besides the regular repository of apps and services, the new Samsung Smart Hub comes with tailor made local content. Partnering up with Singtel, users can enjoy the Mio TV Play app which brings movies to your home television. Toggle is another personal entertainment service which consumers can leverage and Starhub’s TV Anywhere VOD app is also provided. 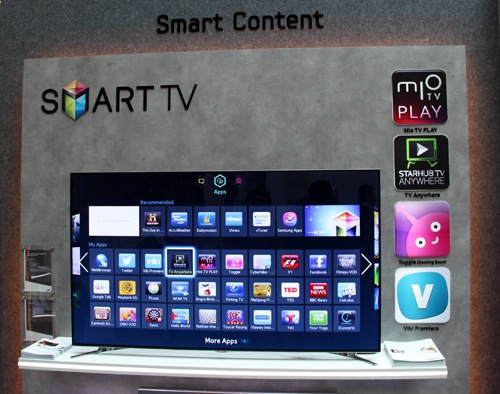 In order to help users navigate the offerings in the Smart Hub, Samsung has improved their motion control system to accept two hands input. Along with the ability to recognize a broader range of gestures than before, users can now employ different movements to control their Samsung television. For example you can use a thumbs-up gesture to dish out likes when using Facebook on the new TVs. Double handed gestures include gestures such "pinch to zoom". If waving your hands about is not your style, you can also issue voice commands to switch channels, control volume and perform other functions. Do note however that motion and voice controls are only available on selected models such as the higher-end F7500, F8000 and F8500 series. 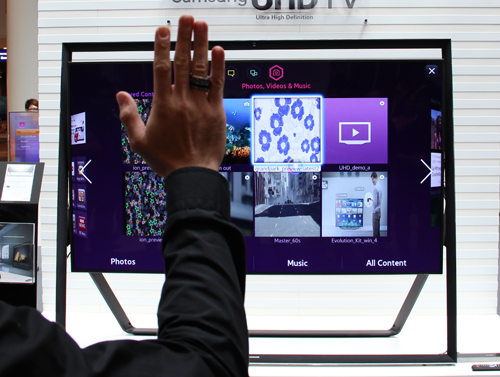 With the new Smart Hub suite growing leaps and bounds in functionality and performance from the 2012 version, Samsung will be introducing the Evolution Kit for the benefit of those who possess older Samsung models. Just plugging this device in will upgrade your older Samsung Smart Hub to the new version. Equipped with a newer processing platform, the Evolution Kit will only be compatible with the E7500 TV series and above and is an effort on Samsung’s part to future-proof their products. Samsung stated that the Evolution Kit will be available in the second quarter of 2013, but was unable to disclose any pricing information at this point of time.

As always, Samsung has promoted the great synergy between its smartphones, tablets, notebooks and TVs. With the advent of Miracast wireless standard, we were also given a demo of how you can mirror your smartphone screen on the television and use your mobile device as a source for video content. 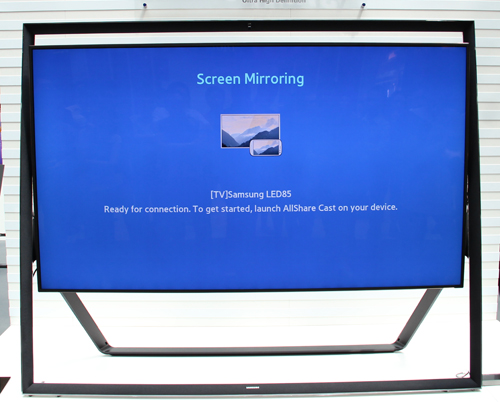 Performance is obviously an important aspect of any television and Samsung has paid heed to this key feature in their new range of televisions. The pinnacle of their capabilities is represented by the 85-inch UHD TV which has a resolution of 3840 x 2160 pixels. Premium models from the new range also boast quad-core processors powering their operations and smart functions. According to Samsung the key performance indicators they have been focusing for the new F Series televisions is Color, Detail and Realism. As soon as we get a review unit in, we'll tell you if this new range lives to its billing.