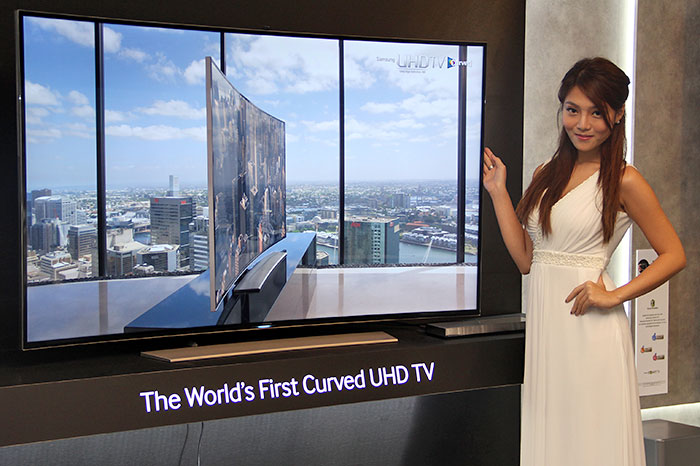 Staying Ahead of the Curve

Since 2006, Samsung has topped the global flatscreen TV market share leader board. According to market researcher DisplaySearch, in 2013, the Korean consumer electronics giant took home 36% of the large-screen market (60 inches and larger), more than the second and third-placed Sharp (21.2%) and Vizio (11.4%) combined.

But that doesn’t mean that other TV makers (including those in China and Taiwan) are just going to roll up and die. Not especially when they see emerging technologies like 4K Ultra-HD (at 3,840 x 2,160 pixels, it offers four times the resolution of full HD), OLED, and curved TVs as great opportunities for a fight back. In fact, in the global UHD TV market, it’s neck and neck between Samsung and current leader Sony (14.9% vs. 18.2% in 4Q 2013, according to DisplaySearch).

Of course, after spending much of last year narrowing the gap between itself and Sony in the 4K sector (which was quite a success, we must add), Samsung is keen to maintain its momentum this year. Already in this past CES show, we’ve seen the company wheel out a series of 4K UHD TVs, including the world’s first curved UHD TV. And today, Samsung has announced which of these are coming to Singapore.

Leading Samsung’s curved UHD TV charge this year in Singapore is the aforementioned U9000 series. Available in 55 and 65-inch screen sizes (no news when the 78-incher will reach here), the U9000 LED LCD UHD TV (just to be clear) has a curvature of 4200R (i.e., the curve of a circle with a radius of 4,200mm), which Samsung says offers the best picture quality from a normal viewing distance of 3 to 4m. Naturally, a fair amount of Samsung proprietary TV tech is involved, such as Micro Dimming Ultimate, which provides hardware-based local dimming of the TV’s edge-lit LED backlights; Auto Depth Enhancer, which analyzes regions of images and automatically adjust contrast for a greater sense of depth and 3D-ness; Samsung PurColor, for more accurate color and detail reproductions; Peak Illuminator & Precision Black, for maximizing brightness range; and Quadmatic Picture Engine, for 4K upscaling of non-4K content.

Powered by a QuadCore Plus processor, the U9000 also has a fancy Multi-Link ‘contextual multitasking’ mode that lets you split the screen real estate, so you can do things like having live TV on one half of the screen and contextual search results on the Web browser or relevant YouTube video content up on the other half at the same time.

Like the company’s S9 series, the U9000 is also future-proof thanks to the One Connect media box that houses the TV’s brains outside the panel. So down the road when there are new UHD hardware and software standards, all you need to do is to switch out the box with the latest Samsung UHD Evolution Kit to upgrade your U9000. Out of the box, the U9000 already supports the latest standards, like HEVC, HDMI 2.0, MHL 3.0, and HDCP 2.2.

Wall-mountable with a specially designed kit that’s compatible with the VESA standards, the U9000 series will hit major local consumer electronics stores this May. The 55 and 65-inch models have a recommended retail price of S$6,499 and S$9,499 respectively. 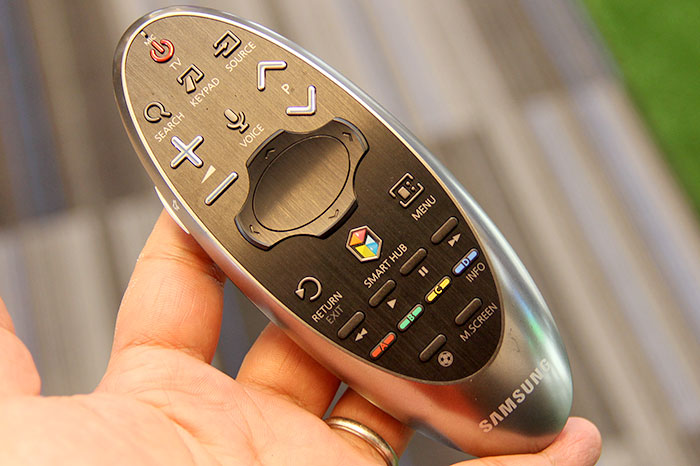 If curved screens aren’t your cup of tea (but 4K is), then there’s the U8500 series (a.k.a. U8550 in other regions), which is a flat UHD TV. It also features the One Connect box, so early adopter’s remorse should be minimized. Other features include the software-based Micro Dimming Pro local dimming tech, a quad-core processor, Instant On (which turns on the TV in under 2 seconds), and the above-mentioned Multi-Link split-screen mode. 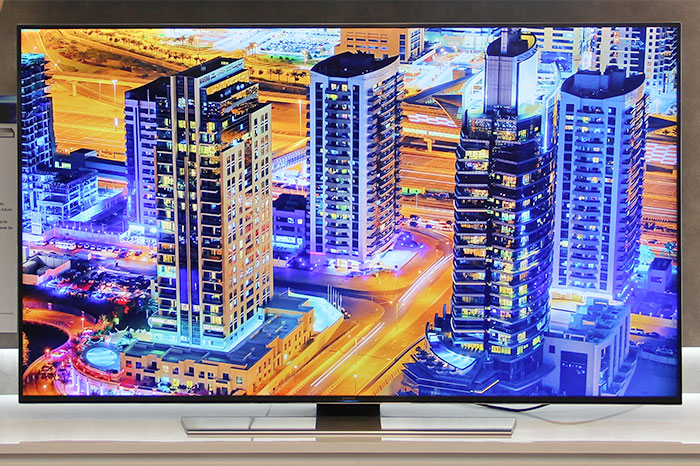 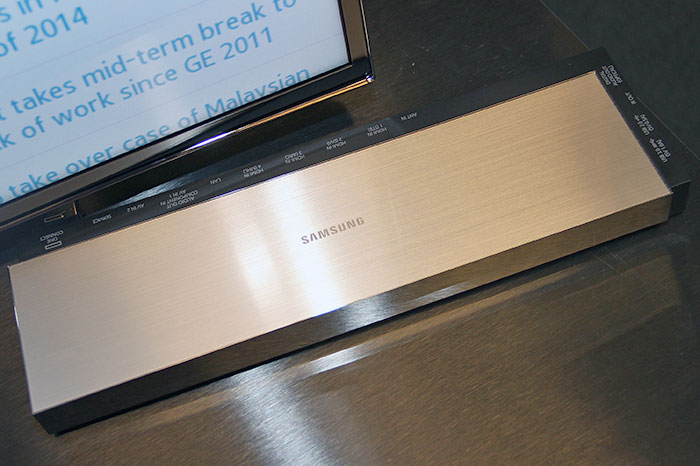 Of course, 4K UHD content is still hard to come by today, even for the rich. To ease the transition, Samsung is giving those who pre-order the U9000/U8500 between now and May 4 a UHD Video Pack. Valued at S$499, this 1TB, USB 3.0 external hard drive is pre-loaded with movies (e.g. Night at the Museum, X-Men Origins: Wolverine, G.I Joe: Retaliation, World War Z) and three documentaries rendered in 4K. There's no news on whether this UHD Video Pack will be sold separately after the promotional period.

Okay, what if 4K TVs aren’t your thing, but curved TVs are? In typical Samsung fashion, there’s such a TV for you, and it takes the form of the H8000 curved full HD TV series. Like the U9000, it has the same 4200R curvature and can be wall-mounted. But it trades the Quadmatic Picture Engine for the 3D HyperReal Engine, and there’s no Precision Black local dimming tech (but Auto Depth Enhancer is still around). Other features include a quad-core processor, Instant On, Multi-Link dual-screen mode, and a built-in Evolution Kit module.

Like the U9000 and U8500, the H8000 also gets Samsung’s latest Smart TV features. There’s the 2014 Samsung Smart Control remote, which now sports improved voice and motion control features, including a new ‘finger gesture’ feature (take note however, only the U9000 comes with a built-in camera, so this is the only set that supports facial recognition and motion control out of the box); a redesigned Samsung Smart Hub with a new Multimedia panel that combines the previous Photo, Video, Music, and Social panels; and an improved Soccer mode that allows enlargement of a selected area on the TV screen, and capturing of highlights from the game aired through free-to-air channels (i.e., not for signals coming through StarHub's set-top box or SingTel's mio TV box). For some local fare, there’s a Channel NewsAsia app, a 4D and Toto app, a Mio TV Play app, a StarHub TV Anywhere app, and a MediaCorp Toggle app.

From today till May 4, consumers can register their interest in the new Samsung curved UHD TV models, and stand a chance to be invited to exclusive preview events. There are going to be three such events:

Those who purchase the curved UHD TVs at the events will receive Samsung vouchers of up to S$1,000 (depending on the TV model) that can be used to redeem select TV, AV, mobile, and tablet products, a UHD Video Pack, and a Samsung wireless keyboard.