The Samsung Odyssey Ark is a ginormous, glorious gaming monitor and TV

The Samsung Odyssey Ark is a ginormous, glorious gaming monitor and TV 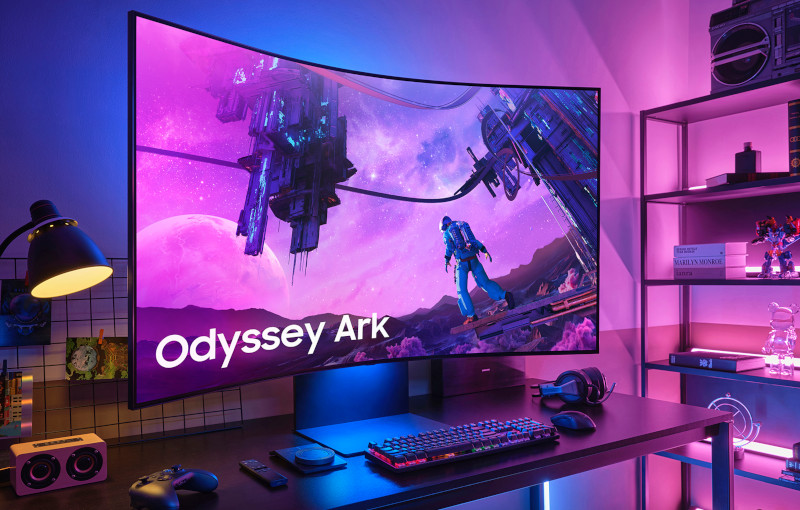 The Samsung Odyssey Ark is a peculiar hybrid of a beast. Part gaming monitor, part TV, it combines the best features of both into a massive frame that weighs over 40kg.

I was almost afraid to set it on my desk. Its imposing size means it looks like it should be mounted on the wall in your living room, and the 55-inch 4K screen with a 1000R curvature envelopes you the moment you sit in front of it.

It is gloriously impractical, yet stunning to behold. Once you power it on and configure it the way you need, or even simply put a film on, it's almost impossible to tear your eyes away. That said, few will find any need for this monitor, save as a statement piece to impress the guests.

The Odyssey Ark is effectively a TV masquerading as a gaming monitor. It combines the best of both worlds, cramming smart TV features alongside a 165Hz and 1ms response time. There is even support for AMD FreeSync Premium Pro to eliminate screen tearing and stuttering while gaming.

It doesn't seem like you should be plugging your PC into this monster, but the Odyssey Ark is a multitasker and productivity maven's dream. 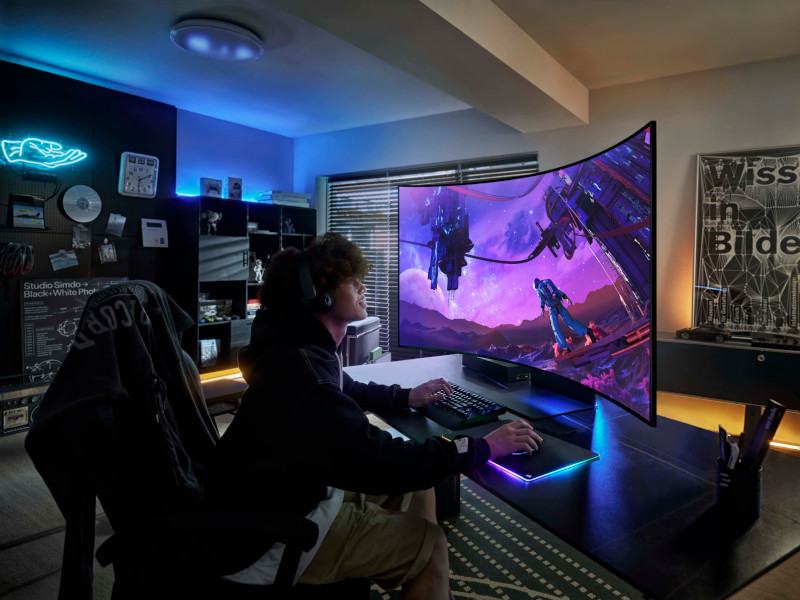 One of its crowning features is what Samsung calls MultiView, which allows it to display up to four screens at once. There is plenty of flexibility built into this mode. You can have four equal-sized screens laid out in a grid, or even opt for two windows with different aspect ratios. On top of that, you can customise your own layout and select different inputs for each window.

In theory, this means that you can eliminate the extra cables that come with a multi-monitor setup. However, it isn't quite so neat and tidy in reality.

While there are indeed fewer cables to contend with, the monitor requires a large box that uses the same One Connect concept from Samsung's TVs. A thick optical cable runs from the monitor to the box, and everything plugs into this box. There are a total of four HDMI 2.1 ports, an Ethernet jack, and extra USB connectors round the back.

I have also been told expressly to take great care of the optical cable and never allow it to kink or bend, so cable management may not necessarily be as simple as it seems.

There are some odd limitations to MultiView as well. You cannot use apps like Netflix, Prime Video, or Disney+ in MultiView mode, and there is support for just one HDMI input. This means you cannot use multiple PCs or laptops, or even a PC together with a console.

The monitor can also sit vertically in Cockpit Mode, where it literally towers above you. While you'd think that you'd have to crane your neck to look at content at the very top of the screen, the aggressive curvature actually helps mitigate that somewhat. The monitor also feels incredibly smooth when rotating, removing any qualms you may have about adjusting it on-the-fly to suit your needs. 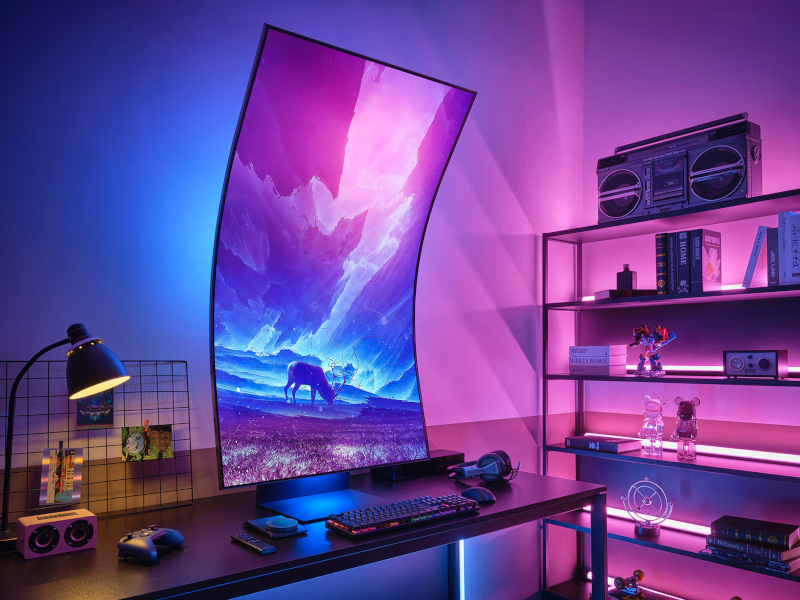 Nevertheless, the Odyssey Ark doesn't feel quite as ergonomic as a regular PC monitor. Samsung recommends sitting at least 80cm away from it, but you'll still need to move your head to take in its ridiculous expanse.

However, Samsung is aware that you may not always have a need for such vast screen real estate. That's where Flex Move comes in. You can shrink the useable screen space from 55 inches to 27 inches, and pick between 16:9, 21:9, and 32:9 aspect ratios. This means that the Odyssey Ark could even be used for FPS games, which traditionally lend themselves better to a smaller monitor.

Having said that, this will probably not be your first pick if you mainly play competitive shooters on PC. It is much better suited to open-world titles like Assassin's Creed Valhalla, or even racing simulators. Console shooters are a different matter altogether, however, and the Odyssey Ark looks like it will be amazing for Call of Duty. 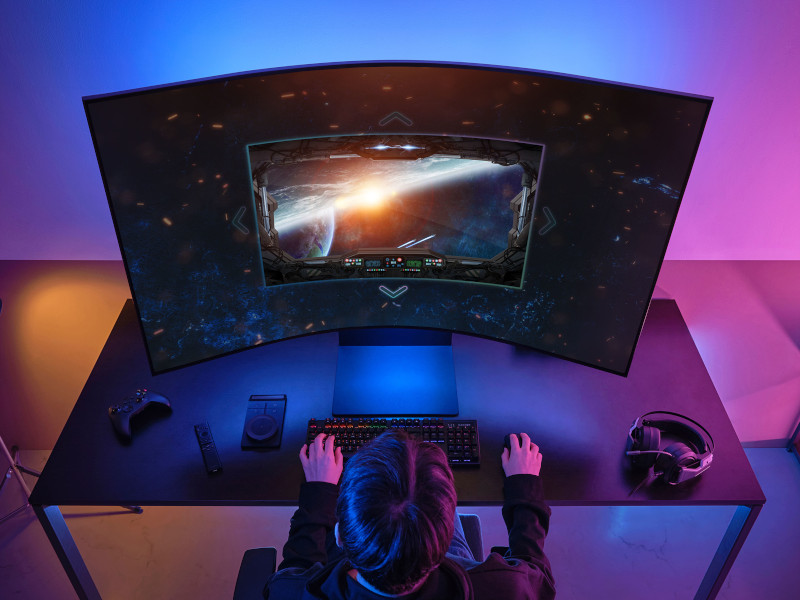 The 165Hz refresh rate also means you'll be able to take full advantage of new-generation consoles like the PlayStation 5 and Xbox Series X as well.

MultiView and Flex Move adjustments are done via the Ark Dial, a nifty control panel with its own solar panel to ensure you never run out of juice. It is surprisingly simple to use, providing quick access to key settings. It also has a large and gorgeously tactile dial, allowing you to flip through different settings with ease.

The UI is super intuitive to navigate. Everything is clearly labeled and configuring the TV is a breeze without any need for a manual. 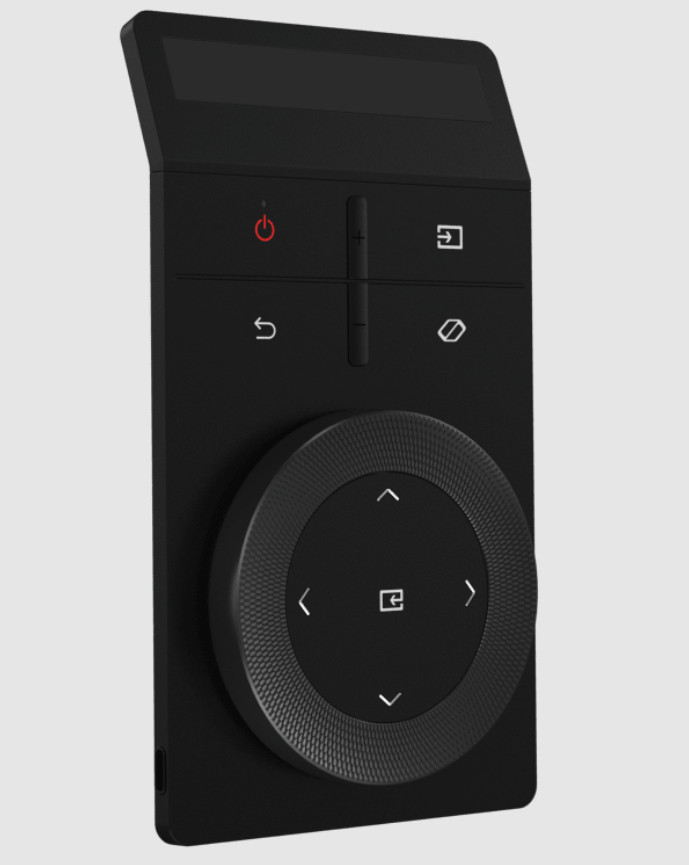 The monitor also comes with a second remote (and its own solar panel), which serves mainly to control functions more traditionally associated with a smart TV. With dedicated buttons for Netflix, Prime Video, and Disney+, the Odyssey Ark is an entertainment machine just waiting to be fired up.

The VA panel uses Quantum Mini LED backlighting, which has 1,056 local dimming zones for deep, true blacks and detailed highlights. At the same time, Samsung says its Quantum Matrix Technology offers new 14-bit processing, which enables a whopping 16,384 black levels to help retain detail in the shadows. But make no mistake, this is no substitute for an OLED panel.

There is also a fancy Neural Quantum Processor Ultra, which supposedly analyses images and deploys a deep learning algorithm to restore detail. Whatever the case, the Odyssey Ark spits out bright, vivid images that leap off the screen. It'll make you want to rewatch all your favorite shows, offering an impressive level of immersion.

Samsung hasn't skimped on audio quality either. Its Sound Dome Tech features four speakers, two woofers, and support for Dolby Atmos. With tight, punchy bass and smooth, rich mids, sound quality is excellent for a TV, and you can probably get away without needing a dedicated external audio system.

To cap things off, the display is flanked by LED lighting at the top and bottom. You can customise the effects of Eclipse Sync, or simply set it to mimic the colors found within your game. Obviously, these work best in a dark room, and they struggle to be seen with the overhead lights on.

And should you really want to use this as a TV and make it the centerpiece of your living room, it includes a VESA mount so you can mount it on your wall.

The Odyssey Ark currently retails for an eye-watering S$4,999. This is a monitor that attempts to check all the boxes. While it isn't quite as good as a dedicated gaming monitor or television, it does the job of both admirably well. The only question is whether you actually need it.