Remember we’ve two 4K TVs here, the JS9500 and JS9000, with the key difference being the JS9000 missing the full-array backlight that’s on the JS9500. For 4K test content, I used various clips I’ve amassed through time, played through either a PC or media player. Some 1080p and 480p (yes, standard-definition) content were used too, mainly for testing the upscaling algorithms. I also tried streaming content from services like Netflix and Amazon, and played a couple of console games whenever possible, primarily to look out for app and HEVC issues and input lag.

Like what I’ve found in the last couple of years, the Movie preset continues to be the best (read: accurate) picture preset on the TVs, and was the one I used as the starting point before I tweaked any further. I had Warm2 for the Color Tone setting on both sets, and tweaked any excess color cast (just a bit in the red and blue primaries) accordingly. 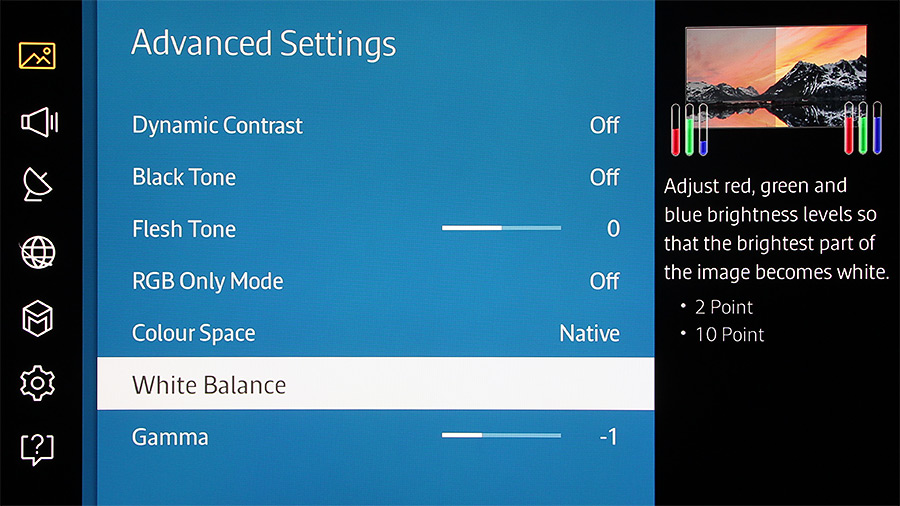 Like their predecessors, the TVs sport an excellent RGBCMY-based color management system. For white balance adjustment, you can either use a 2-point system or a 10-point system. In fact, I didn’t have to do drastic changes to get to D65 and gamma 2.2 (it was 2.1 out of the box). If you’ve the tools, you can spend some time customizing the color space; but since most people don’t, my suggestion is to leave the Color Space setting to Auto, so that it automatically adjusts the palette to suit the content. Setting it to Native will have the TV apply a range of colors that’s wider than the input signal (more on that later).

For the Smart LED setting (which controls the local dimming), I kept to the Standard setting as I found it to offer me the best overall result in the constant struggle between a bright image and sufficient black levels across the screen. I also engaged the Custom option for the Auto Motion Plus setting, and turned on LED Clear Motion because of its positive effect on motion blur. If you notice flicker with this setting, try playing around with the Blur Reduction and Judder Reduction settings. I had mine set to 6 and 0 respectively, in case you’re wondering.

On the JS9000, there’s also this Cinema Black function that dims the top and bottom areas of the video image further. I see no reason not to enable it. 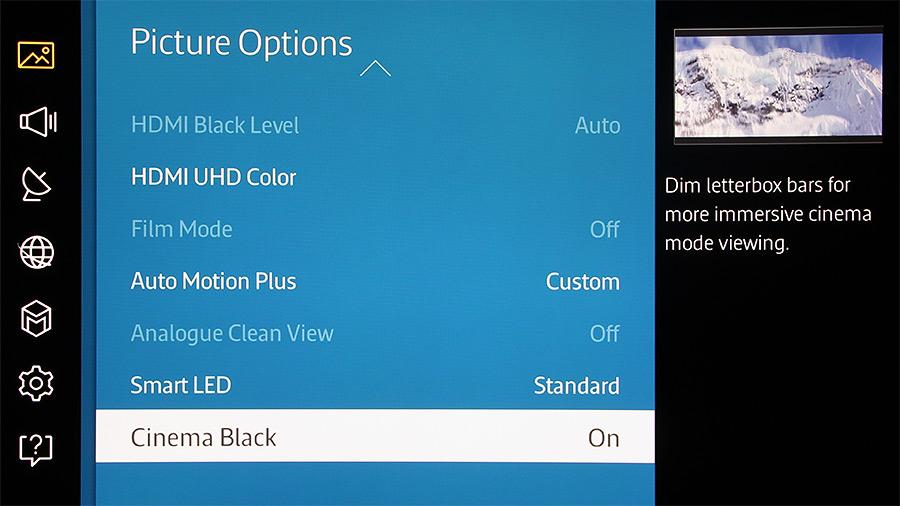 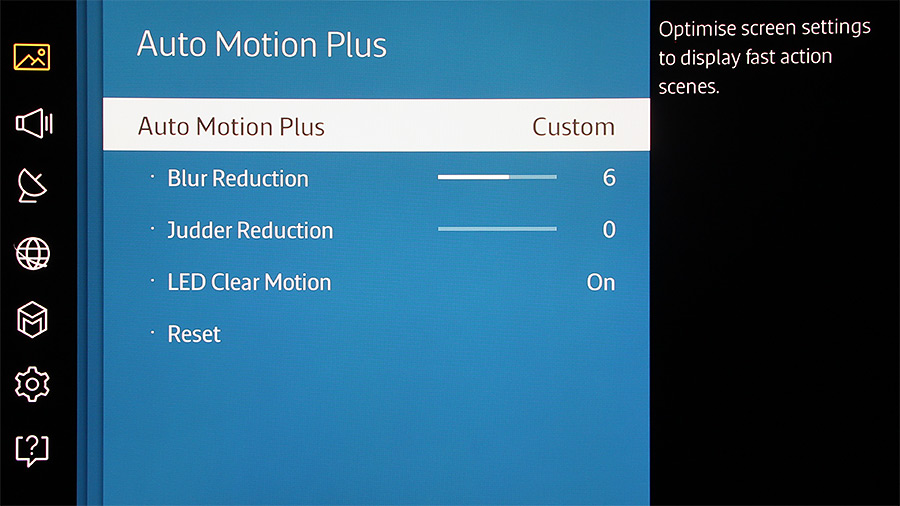 A quick word on curved TVs and 4K viewing distance

The JS9500 and JS9000’s panels have a curvature of 4,200R - that is, the curve of a circle with a radius of 4,200mm. Now, I won’t try to answer if a curved TV makes sense or not here. Personally, I noticed the warp on the JS9500 and JS9000, especially in a brightly lit room. But with curtains drawn and as time passed, the curvature was barely noticeable and I tend to forget about it, turning my attention instead to the content onscreen. If a curved TV is a bridge too far for you, take comfort that Samsung sells two series of flat SUHD TVs, the JS8000 and JS7200.

On a related note, I also found the average household TV viewing distance of 3 to 4m to be unsuitable to fully appreciate a 65-inch (and above) 4K TV. When testing 65-inch 4K sets, I usually sat about 1.5m away from the screen. Of course, that’s for critical viewing; in the real world, my recommendation is simply to make sure your eyes feel comfortable.

Picture quality in one word: Excellent

In a nutshell, if you can afford the JS9500 or JS9000, you’ll love it to bits. I dare say that currently, both TVs are at the pinnacle of LED-LCD TV making. I happened to have last year’s HU9000 with me when testing these SUHD TVs, and both were in every way better. But among the many things, what impressed me the most are the improvements in color spectrum, brightness, and black level. Let’s talk about color first. Needless to say, the SUHD TVs benefited from the nano-crystals (quantum dots) tech, resulting in a native color gamut that’s much wider than before. While the UHD Alliance, which Samsung is a member of, has yet to finalize its UHD/HDR spec, it’s no secret that the group has settled for the DCI-P3 color that’s common in movie theaters - and the Samsung SUHD TVs are ready for it. As such, it’s also no surprise to find that the TVs cover fully the smaller Rec. 709 color space that’s adopted in almost all HD content. To reiterate, the easiest way for non-technical users to get accurate colors for the majority of their content is to use the Movie picture mode and let the TV automatically adjust the color space.

Now, Samsung’s past flagship LCD TVs were known to go very bright, and it’s the same story for the JS9500 and JS9000. This basically means that contrast and saturation won’t be too adversely affected if you decided to raise the blinds and let the sunlight in. If the picture looks too dark in high ambient lighting, switch to Dynamic mode for a quick boost. 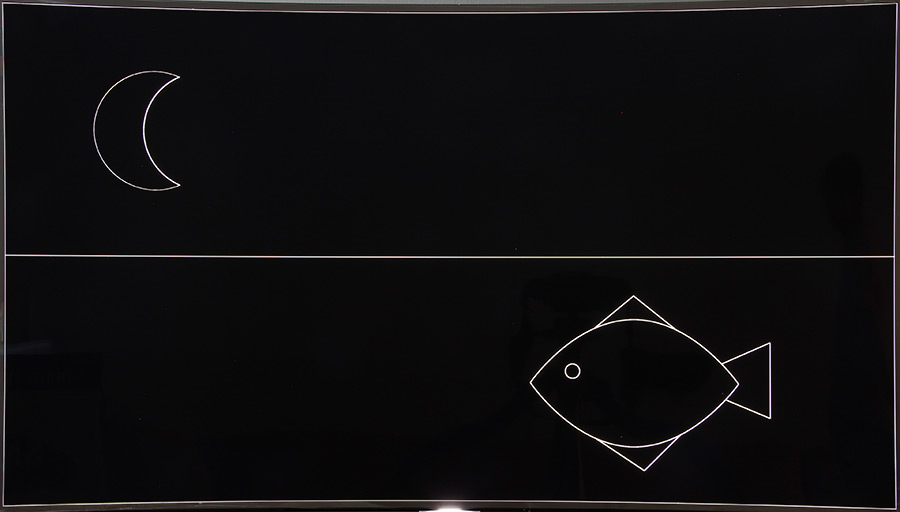 Black levels on the JS9500 and JS9000 were excellent. Expectedly, background glow, which is more noticeable with dark content, was less visible on the JS9500 because of its full-array local dimming. And depending on the screen size, we’re looking at anywhere between 180 and 240 independently dimmable zones on the JS9500. That said, unless there’s a way to do per pixel level backlighting, black level inconsistencies are unavoidable on LCD TVs. This is also the primary reason why OLED has found favor with many videophiles. But credit where credit’s due, as far as LCD TVs go, Samsung’s backlight implementations are the best in the business.

Other image aspects on the SUHD TVs also checked out well. Because of my past experiences with Samsung’s TVs, I’m not at all surprised by the SUHD TVs’ outstanding UHD upscaling, good motion clarity (Samsung uses a black frame insertion method) and high brightness with LED Clear Motion enabled, lack of judder for 1080p24 2D material, and just very slight crosstalk in 3D that you probably won’t notice. Input lag was also very low, good news for console gamers. Regarding HDR, I’ll expand my testing in this area in future reviews, especially when the format gets standardized and more HDR content becomes available. Right now, beyond a couple of HDR remastered clips and series for Amazon Prime members, HDR content is super-hard to come by. My quick take on HDR on the SUHD TVs? Stunning.

Are the JS9500 and JS9000 without faults then? Of course not. LCD local dimming grouses aside, my main gripe is the dip in saturation and contrast when I moved away too much from the central sweet spot. I'd love to see Samsung switch panel type from VA (vertical alignment) to IPS (in-plane switching) or PLS (plane-to-line switching) to improve this area, but would they? 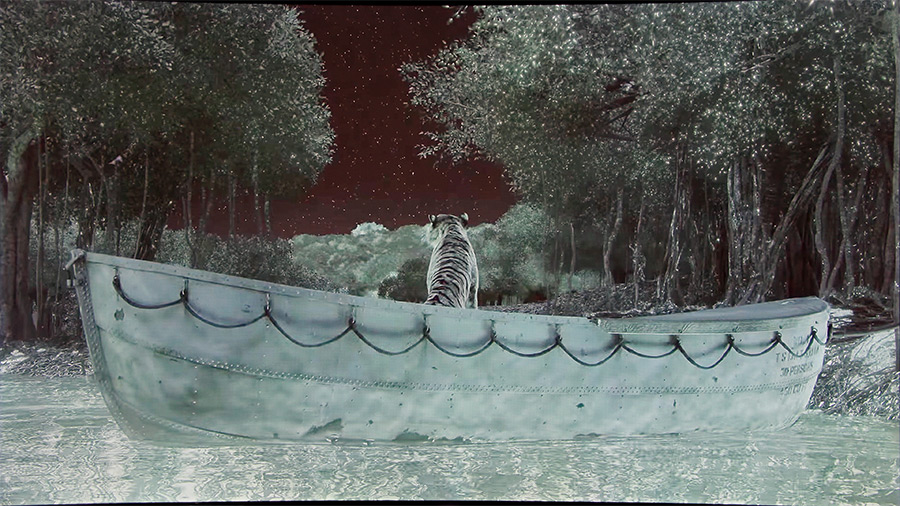 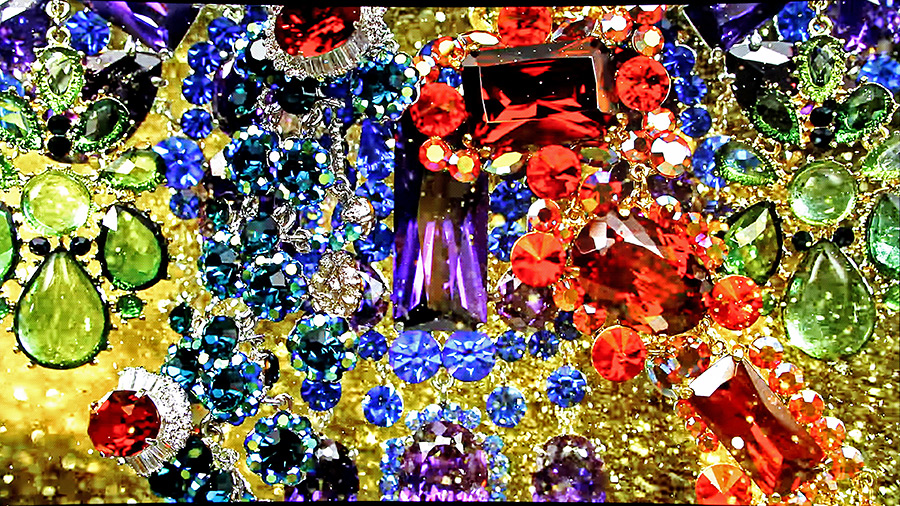 There’s a lot to like about Samsung’s JS9500 and JS9000 SUHD TVs. Both have features filled to the brim; but more importantly, their image quality is top notch too.

A 10-bit panel with Samsung’s Nano Crystal Color tech for a wide color gamut, high brightness suitable for use under most ambient lighting conditions, best-in-class local dimming (be it hardware or software), great responsiveness and low input lag for motion images and gaming, and futureproofing thanks to the One Connect box and HDR support - you really get what you pay for.

The key difference between the JS9500 and JS9000 is in the local dimming implementation. The former has true full-array local dimming, the latter uses edge-lit local dimming. For bright images, the distinction isn’t obvious; and I reckon most consumers won’t even notice anything different. But for darker images or when viewing in a dimmed room, the JS9500 suffered less blooming around bright objects and less spotlight effects along the edges.

The Samsung JS9500 and JS9000 SUHD 4K curved TVs are now widely available, and here are their prices: