Remember we’ve two 4K TVs here, the curved HU9000 and the flat HU8500. For 4K test content, we used Samsung’s UHD Video Pack, Netflix, as well as various clips we’ve amassed through time, which we stored on a hard drive and played through the PC. Some 1080p and 480p (yes, standard-definition) content were used too for upscaling tests. 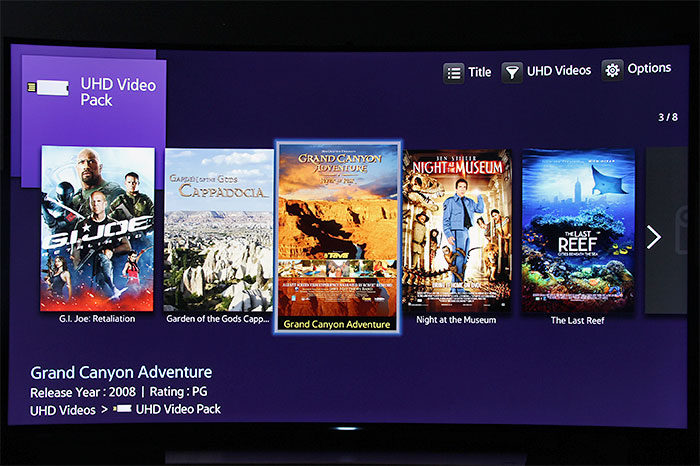 Both TVs actually looked pretty good using the Standard picture mode. That said, we calibrated the TVs in our dim lab using the Movie preset as the starting point. In most cases, you’ll want to decrease the Backlight setting; we found anywhere between 5 and 8 to be best for our room. We kept to Warm2 for the Color Tone setting on both sets, and tweaked any excess color cast accordingly.

For white balance adjustment, you can either use a 2-point system or a 10-point system. Maybe we were lucky, but we didn’t need to dive into the 10-point system unless we want to achieve crazy-low delta errors. Similarly, the Auto option for the Color Space setting should work well for most people. Sure, if you’ve in possession of professional calibration equipment and software (e.g., the SpectraCal CalMAN 5), you can engage the Custom option and improve colors further through the TVs’ excellent RGBCMY-based color management system.

For the Smart LED setting (which controls the local dimming), we kept to the Standard setting. We also engaged the Custom option for the Motion Plus setting, and turned on LED Clear Motion because we found it to have a positive effect on motion blur. If you notice flicker with this setting, we recommend playing with the Blur Reduction and Judder Reduction controls (try dialing in 7 and 0 respectively). 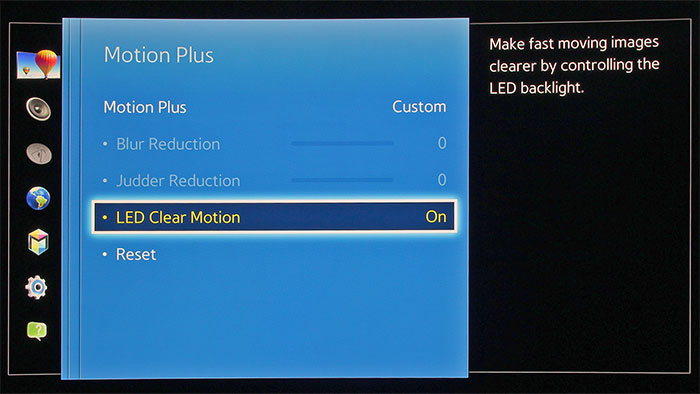 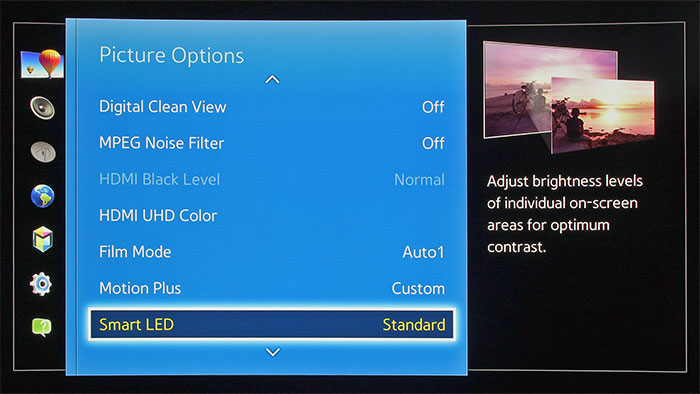 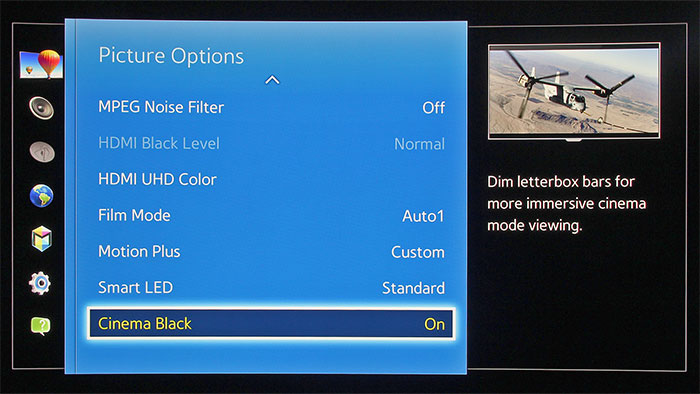 Let us reiterate that any advantage in resolution 4K TVs have over 1080p sets is only visible if you sit close enough. But how close is close? According to Samsung, the average household viewing distance is 3 to 4m. We started off with this distance, and quickly found that it’s simply too far, even though the TVs in question here have seemingly large 65-inch screens. Take note though, when we say “too far”, we don’t mean the picture doesn’t look good; rather, what we’re saying is that at 3 to 4m, you aren’t likely going to notice any difference between either Samsung 4K TVs and a 1080p set of the same size.

Of course, logically speaking, the biggest improvement can be had when you sit at a distance where your nose literally touches the screen; but no one can watch a TV like that. In the HardwareZone AV lab, we (or rather, this reviewer who has 20/20 vision) found the sweetest spot to be around 1.5m (and this is the distance most of the viewing tests were done), but even that is too close for comfort for most people. If you were to ask us what’s the furthest distance you can place your sofa from a 65-inch 4K TV, we’ll say 2.5m.

To cut the long story short, when paired with 4K sources, there’s no question that both the HU9000 and HU8500 offer truckloads of details. Clearly, whatever separates the two can’t be found in the resolution/detail department. 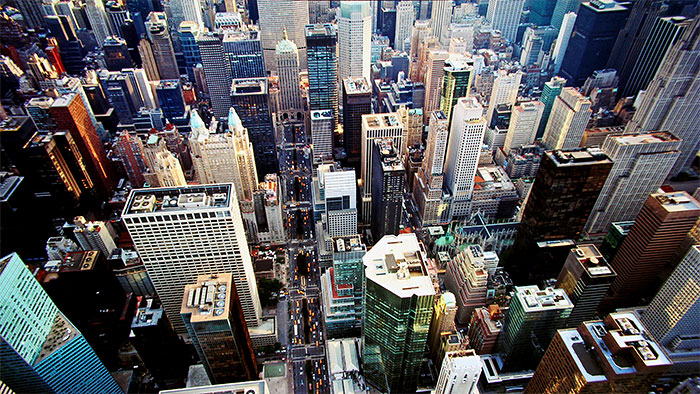 Now, if you’re wondering if the HU9000’s curved screen made any difference, the short answer is: Yes, but it’s probably not significant enough for most people.

First of all, with the lights turned down, and especially if you’re engrossed in whatever you’re watching, the HU9000’s slight curvature shouldn’t jump out at you. Everything should just blend naturally into the background. Even with the room lights turned up, it was at the back of our mind 10 minutes into World War Z. Sure, at 1.5m away, we noticed the warp and the sides seemed to look slightly bigger than the center more often than if we were to sit 3m away, but we got used to it and forgot about it soon enough. In addition, versus the flat HU8500, we didn’t find the HU9000 any more immersive. In fact, a few in the HardwareZone team said that they felt the HU9000 looked smaller than the HU8500.

If anything, the concaved HU9000 did reduce reflections from ambient light sources (we purposely put a couple of studio lights around the TVs) to give a less washed-out image than the HU8500. In short, if reflections on your current flatscreen TV are bothering you, the HU9000 may help. That said, perhaps the more pragmatic (and cheaper) workaround is to remove the offending light source, reposition the TV, or draw the curtains. 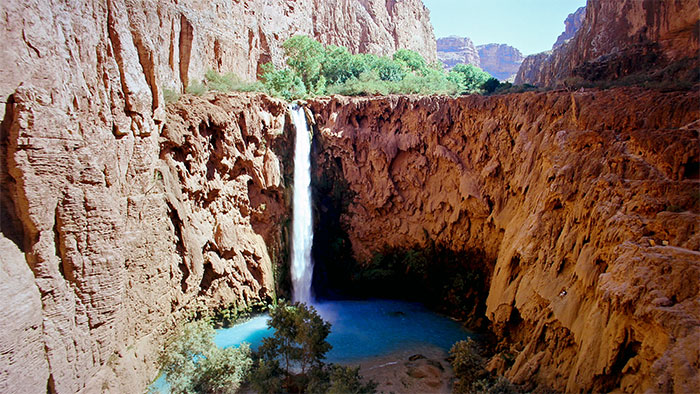 For our 1080p tests, we used the Blu-ray versions of Skyfall and The Dark Knight, which were played on a Samsung Blu-ray player. For SD, we roped in the DVD version of The Bourne Supremacy.

In a nutshell, both 4K TVs upscaled the aforementioned material very well. In our opinion, the Blu-ray release of Skyfall is of reference-level quality, and the Samsung TVs have really done justice to the picture’s razor-sharp details. Case in point: The close-up where Bond was about to get shaved had this reviewer rubbing his own chin instinctively because it looked so real.

We give props to Samsung for building in very decent speakers on both the HU9000 and HU8500. Of course, the many multi-directional audio moments in Star Trek Into Darkness are best appreciated with external surround speakers, but the small front-firing ones shoved into the TVs’ cabinets didn’t do a poor job either. Both TVs incorporate a Dolby MS11 multi-stream decoder that supports decoding of many of today’s popular audio formats, and Samsung’s own DNSe+ processing tech.

For a couple of years now, Samsung’s top-end LED-backlit LCD TVs had excellent backlight control and screen uniformity, and these are repeated here once again. Despite its curved screen, we didn’t notice any out of the norm uniformity issue (or severe dirty screen effect) on the HU9000. If anything, it’d be that the flat HU8500 looked ever slightly more uniform, but that was with a gray test pattern that no average user in the right mind should be staring at.

Black levels on both TVs are equally impressive too, as far as LED LCD TVs are concerned. During low Average Picture Level (APL) scenes (that is, scenes with lots of dark elements) in The Dark Knight and World War Z, the HU9000 went a touch darker than the HU8500, and we credit that to the hardware component used by the curved TV’s Micro Dimming Ultimate local dimming method. Backlight transitions, while still present on both TVs, were few and far between.

Viewed from the sweet spot, both TVs exhibited extremely broad contrast. We noticed a dip in contrast and saturation during off-axis viewing, but we reckon most people won’t even notice it.

Let us just stress again that the HU9000 and HU8500 rendered colors beautifully, be it 4K or Blu-ray content. The Blu-ray release of Planet Earth has always been this reviewer’s go-to material whenever he wanted to show off a TV, and the Samsung 4K TVs didn’t disappoint, showcasing the deep blue skies, lush green foliage, and skintones of the wildlife convincingly. 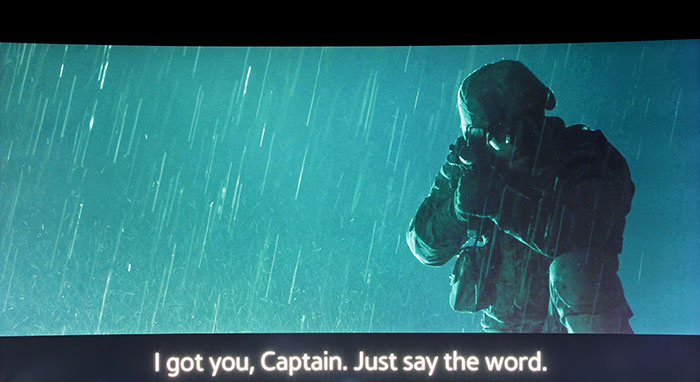 The TVs also exhibited very good motion clarity, no thanks to effective black frame insertion implementation (use ‘Custom’ for the Auto Motion Plus setting, and enable the LED Clear Motion setting in the menu). Brightness remained high even with LED Clear Motion turned on (which is good for daytime viewing), and we hardly noticed any flicker with normal content. Another piece of good news is that we didn’t encounter any judder for 1080p24 2D material.

Regarding 3D, both TVs continue to use an active 3D system, and each TV packs two pairs of SSG-5100GB active-shutter 3D glasses. We found 3D image brightness level to be good (put another way, still not as bright as passive 3D on LG’s sets), and the slight crosstalk didn’t ruin the viewing experience.

Last but not least, both TVs are decent gaming displays (giant screens, great colors - what’s there not to like?), but first-person shooter or sports gamers might be annoyed by the input lag. Switching to Game or PC mode reduces the latency somewhat, but that may still not be enough for hardcore gamers. Those who only play Angry Birds-type of games can safely ignore this paragraph.