The year of 4K

The war between plasma and LCD is over, and LCD has won. While you might still be able to pick up one of the last great 1080p plasma sets somewhere (quick, before they run out!), LCD (or rather, LED-backlit LCD) is your only choice if you’re shopping for a TV with 4K resolution.

Versus last year, buying a 4K TV today makes more sense. For one, most of the newer models have HDMI 2.0 inputs, which means they support 4K up to 60/50 frames per second. A wider range of screen sizes is now available as well, and prices are dipping (though still not quite at a level suitable for mainstream consumption).

Of course, the lack of 4K content is one of the often cited reasons against 4K TVs. In the U.S., Sony sells a US$700 media player that stores and plays 4K movies and TV shows downloaded from the company’s Video Unlimited 4K service, but it only works with Sony’s 4K TVs; and here in Singapore, Samsung has an external hard drive preloaded with a few 4K movies and documentaries, and which - you guessed it - only works with Samsung’s 4K TVs. Surely, if 4K content is hard to come by in the U.S. (at least providers there like Amazon, Comcast, and Fox have announced plans to deliver 4K video), you can imagine how much worse it’s for us here (Netflix 4K streaming aside).

On another related note, while we’re glad to see more affordable 4K TVs, be reminded that this is because manufacturers are churning out 4K TVs with smaller screen sizes, such as Samsung’s HU7000 series, which starts at 40 inches. In our experience, buying a 4K TV below 65 inches to play 1080p content is a waste of money; you’re better off buying a 1080p set of the same size. Assuming you’ve 4K content, buying a small 4K TV doesn’t make a lot of sense either, since you’ve to sit very close to it to notice the improvement.

Although the HU9000 and HU8500 differ very little in specs (more on that later), they’re worlds apart in the looks department. You see, the HU9000 is a curved 4K TV, whereas the HU8500 is your regular flatscreen 4K TV. While not the sole reason, the HU9000’s curved panel is without doubt the biggest contributor to the S$1,500 price difference between the two TVs. The UA65HU9000K is currently priced at S$7,999; the UA65HU8500K S$6,499. Expensive, yes, but both are now quite a bit cheaper than when they first launched.

The more important question is: Is the HU9000 worth the premium? 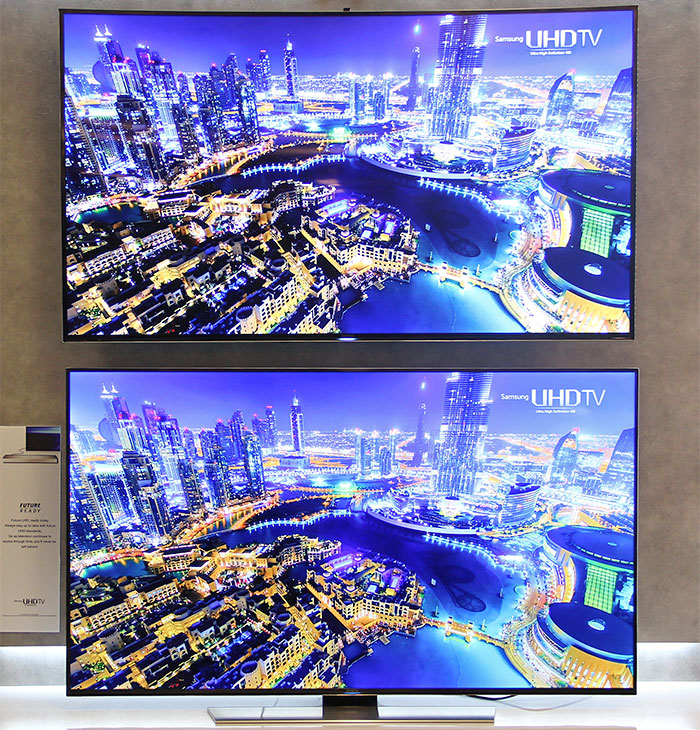 We've talked about Samsung's case for a curved TV in a prior article; but to reiterate, the HU9000 is marketed as the world’s first curved 4K TV, and the panel has a curvature of 4,200R (that is, the curve of a circle with a radius of 4,200mm). While this number sounds big, the curve is actually pretty slight, so much so that it still fits in the same box that its same-size flatscreen sibling comes in.

According to Samsung, 4,200mm is chosen because the resulting curvature works well with the average TV viewing distance, which is about 3 to 4m. But let’s be clear upfront: at that distance and especially when seated in the sweet spot down the center, we found the HU9000 as immersive as the non-curved HU8500. It’s really more of a size factor than anything else. It goes without saying that the curvature is more noticeable from the sides; and if you were to ask Samsung (or any other curved TV maker), off-center viewing is one area that a curved TV fares better than a flatscreen TV. We’ll check out if that’s really the case further down this review.

To best recreate the floating TV illusion, we suggest wall-mounting the HU9000, which can be done with standard VESA brackets or Samsung’s very own WMN450M mini wall mount. For putting on the TV rack, the silver brushed metal stand, which sports a matching curve, is thin, unobtrusive, and inconspicuous.

In short, the HU9000 is really a stunning looking piece of kit, even when the screen is off. 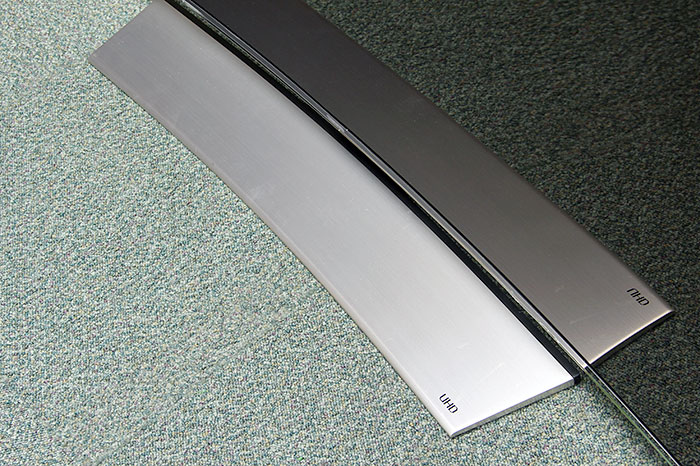 In short, design-wise, the HU8500 is the flat version of the HU9000. Cosmetic differences compared to the HU9000 include a slightly thinner matte black bezel (8mm vs. 10mm; or 9.5mm vs. 13mm if you measure all the way to the side trim), a silver brushed metal finish for the trim (vs. glossy chrome on the HU9000), and a more plasticky rear cover. The non-swivel stand is given the same brushed metal treatment just like the HU9000’s stand, but minus the arc, of course. 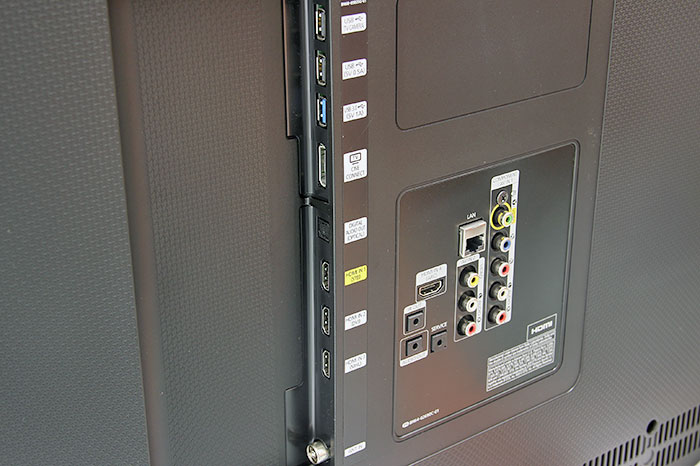 The HU9000 comes with this longish One Connect box, which strange as it might sound, houses the brains of the TV, and all the input/output ports. This clever implementation basically means that you can perform hardware and software upgrades to the TV down the road without having to throw out the TV entirely.

However, for the HU8500, all the hardware components are housed within its chassis, with the I/Os at the rear. The back does sport a One Connect jack, so upgrades can be done by connecting to future One Connect boxes. 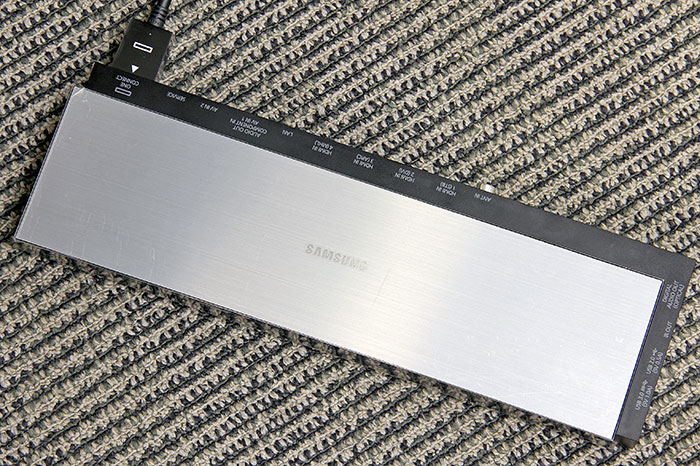 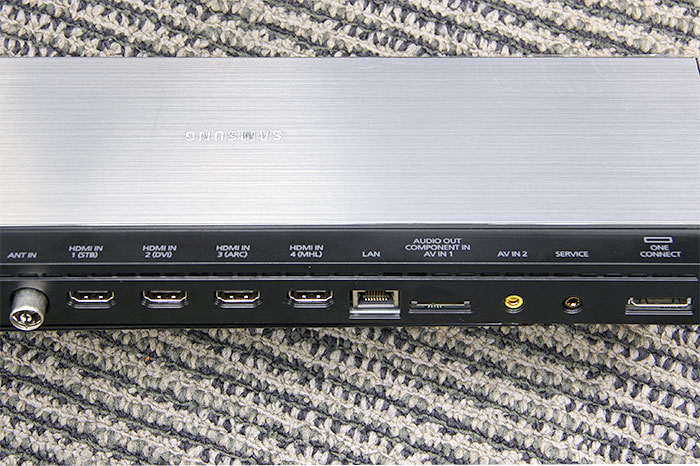 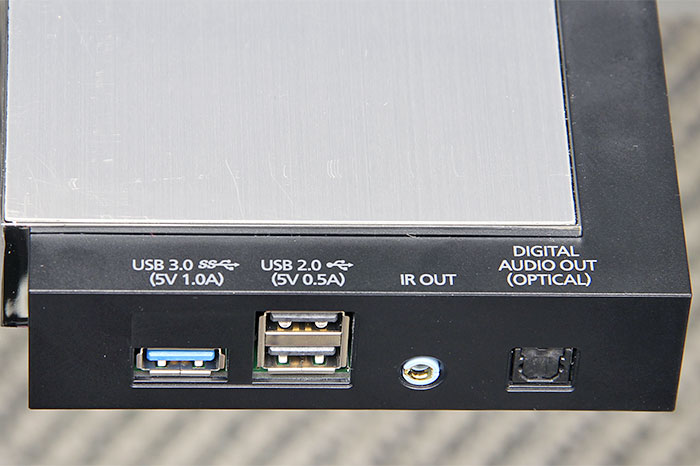 Packed together with the HU9000 is another black gift box-style case that neatly holds the user manuals, power cord, Samsung’s latest smart TV remote control (Samsung calls it Smart Control), two pairs of active 3D glasses, an IR extender cable (if you want to use the remote to control other equipment that rely on IR commands), as well as component and composite AV cables (which plug into the One Connect box, obviously). There’s even a piece of cleaning cloth, and some plastic adapters that are only used if you’re wall-mounting the TV. 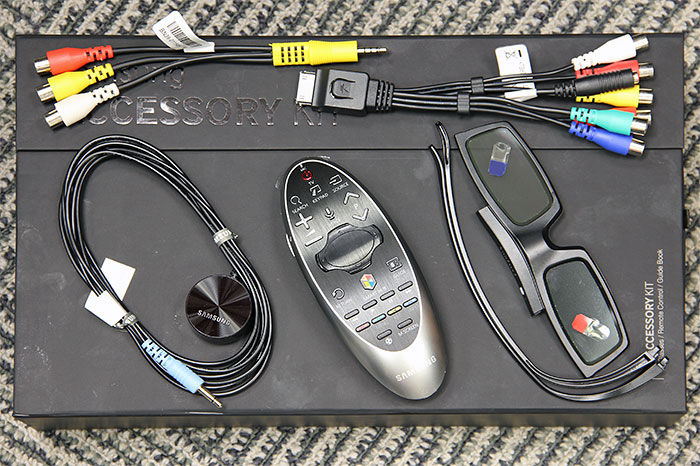 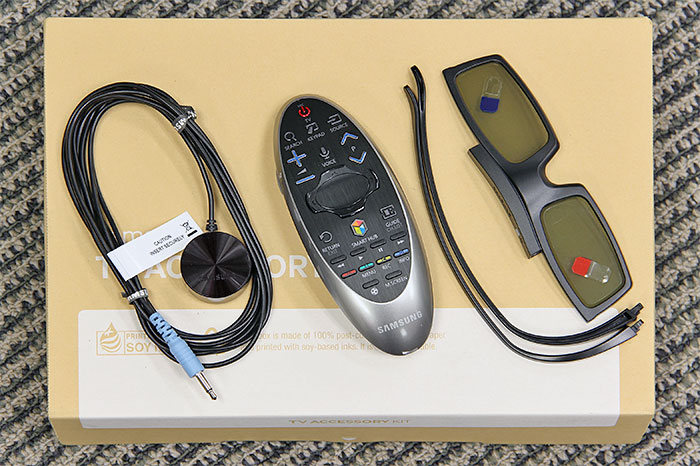 Connected via Bluetooth (so line of sight isn’t required), the silver color (with a black brushed metal-like faceplate) Smart Control remote that both the HU9000 and HU8500 come with sports an elongated oval design, with a slight curve for a better fit in the hand.

For navigation, the highlight this time round is a new button console with four direction keys and a touchpad in the center. Unlike a notebook’s trackpad, you don’t scrub the Smart Control’s touchpad to move the cursor. Instead, the motion control system kicks in the moment you place a finger on the touchpad, and the cursor moves when you move the Smart Control - you know, like a wand. Naturally, not all menus support the touchpad, which is why we still have the four arrow keys. In addition, the touchpad is handy for scrolling webpages, and doubles up as an Enter button (when you press it).

Being a small remote also means that some keys have to be omitted. While dedicated media transport keys (rewind, play, pause, fast-forward) are still around, you won’t see any number keys. For entering digits and other commands not found on the Smart Control, you’ve to turn to the standard remote or onscreen virtual remote, which is activated by pressing the Keypad button on the Smart Control. 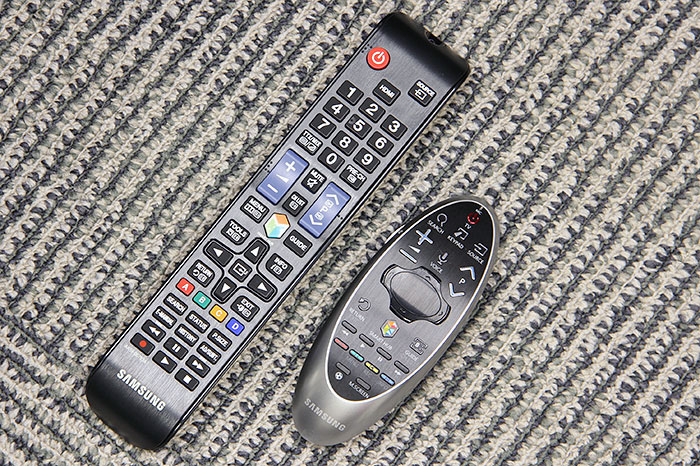 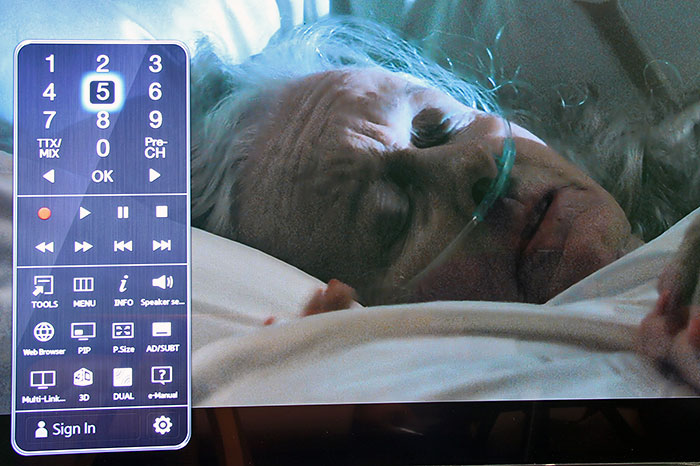