Samsung Galaxy Tab S2 8.0 and 9.7 LTE review: Thinner, faster, but not much else 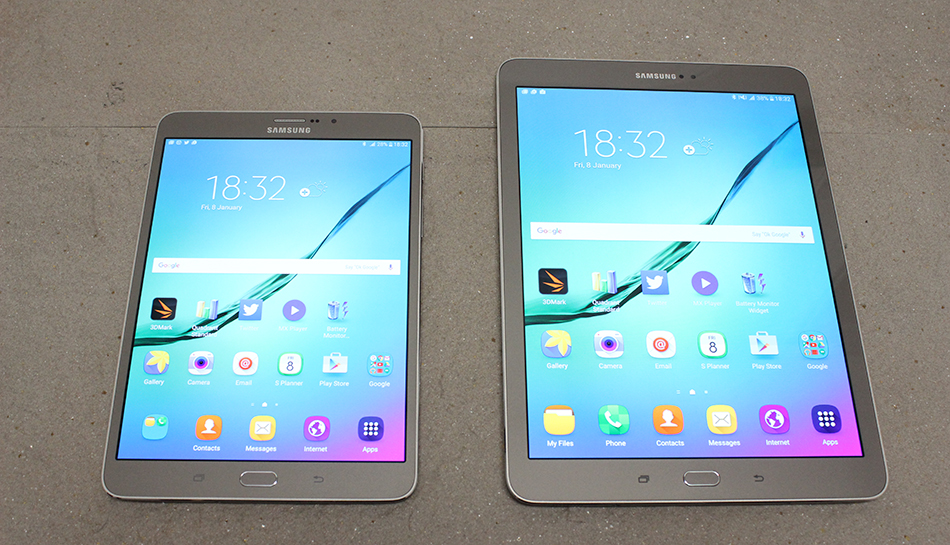 What’s a tablet to do in a world where growing legions of phablets and 2-in-1 hybrids are all vying for a place in consumers’ hearts? When the iPad first came out – the first of many tablets to come – many derided it as just being an oversized iPhone. Whether or not you still feel that to be true about the iPad, it did spawn an entirely new category of devices.

But we’re in 2016 now (yes, we’re aware that this review is long overdue), and tablet sales are flagging. In October last year, market research firm IDC reported that global shipments for tablets had fallen for the fourth successive quarter. Even Apple reported in an October earnings statement that iPad sales had slipped 19.7% in the past 12 months.

And what did Samsung, the second largest tablet manufacturer, do? It first launched the Galaxy Tab A with S Pen (8.0) and (9.7), followed by Galaxy Tab S2 8.0 and 9.7, iterative upgrades on 2014’s Tab S. For those who don't mind a huge screen, Samsung also launched the huge 18.4-inch family oriented Galaxy View tablet.

The Tab S2 is Samsung’s newest flagship tablet for personal media consumption, and the company is making a play for your wallet with a design that is thinner and lighter than ever.

However, this is a time when Apple just released the iPad Pro, and Microsoft the Surface Pro 4. With the right accessories, they both can double as tablet and laptop (to varying degrees of success of course). Honestly, we’re not quite sure that the Galaxy Tab S2 has the chops to hold its ground when there are so many forces that are gnawing away at its market share, but that's also why Samsung just launched the Galaxy TabPro S 12-inch tablet at CES 2016 that runs on Windows 10. But before that arrives on our shores, let's see how the Tab S2 Android based tablet fares in our assessment. 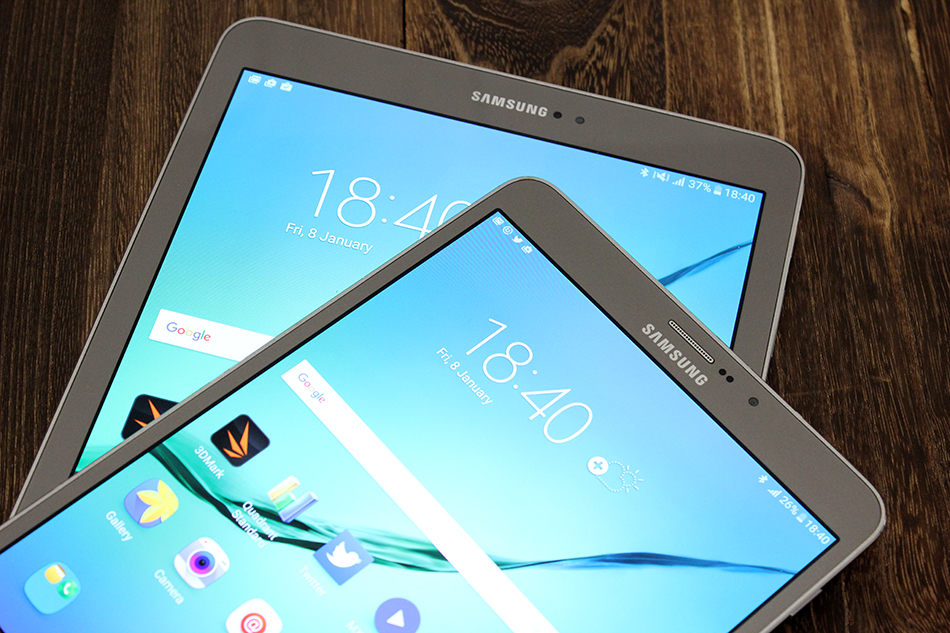 For starters, let’s just reiterate that the Tab S2 is thin, really thin. At just 5.6mm thick, both the 8-inch and 9.7-inch models are thinner than even the 6.1mm-thick iPad Air 2 and the older 6.6mm thick Galaxy Tab S. It is also exceedingly light - the smaller 8-inch slate weighs just 272g, while the larger 9.7-inch model is not that much heavier at 392g. Again, these are much lighter than the previous generation counterparts. This effectively means that you can just slip them in your bag and forget that they’re even there. You’ll also be able to use even the 9.7-inch Tab S2 for one-handed reading over extended periods of time. However, its svelte design isn’t without trade-offs. In order for Samsung to make the tablets this slim, something had to go. In this case, that’s the battery capacity. Compared to 2014’s Galaxy Tab S, which had 4,900mAh and 7,900mAh batteries for the 8.4- and 10.5-inch models respectively, the Tab S2 features smaller 4,000mAh and 5,870mAh juice packs. As we’ll see later, this means poorer battery life – not a good sign if you intend to use this as your primary productivity device outside your laptop or PC. Furthermore, it’s a given that consumers expect to see improvements moving on to the next iteration of a particular device, and battery life is one of those areas where enhancements are most valued. We have mixed feelings about the trade-off between a slim profile and battery life here, and it really depends on how you intend to use the tablet.

Overall, the build quality feels solid enough, although we might venture to say that we’d prefer it to have a little more heft. Part of the reason it’s so light is because Samsung has opted for a matte-textured plastic back instead of aluminum. An entirely metal build would no doubt convey a more premium feel, but the soft-touch plastic still looks much better than the Tab S’s dimpled plastic back. In our time with it, it also proved quite adept at resisting fingerprints and was pleasantly grippy. 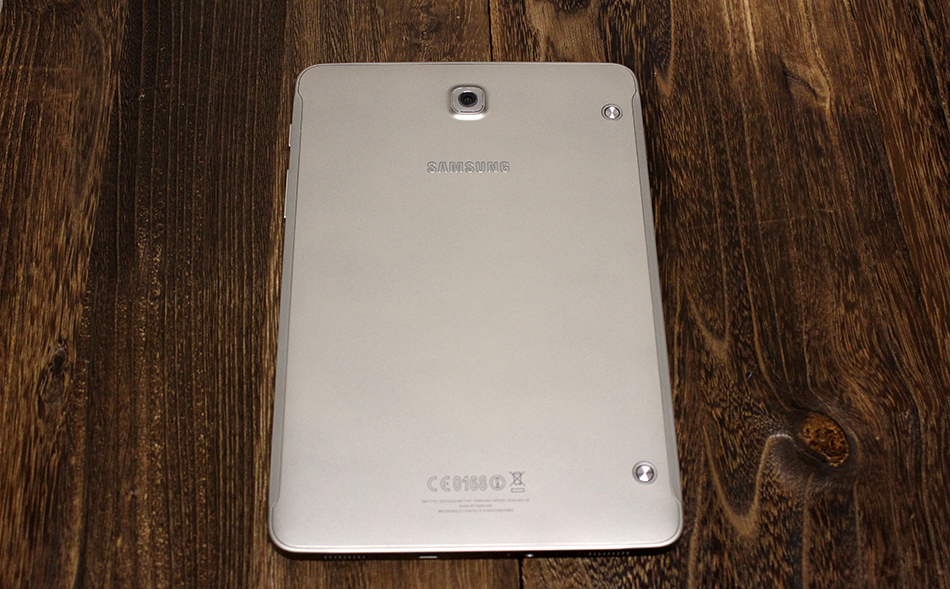 The Tab S2’s back is interrupted only by the Samsung logo, a very slight rear camera bump, and two clips for use with the official Book Cover accessory.

The power and volume buttons are located along the tablet’s right edge. Their color matches that of the tablet, and we like that there’s sufficient space between them so you won’t hit one when you’re really reaching for the other. Furthermore, there is good resistance to them so you shouldn’t encounter too many accidental button presses. 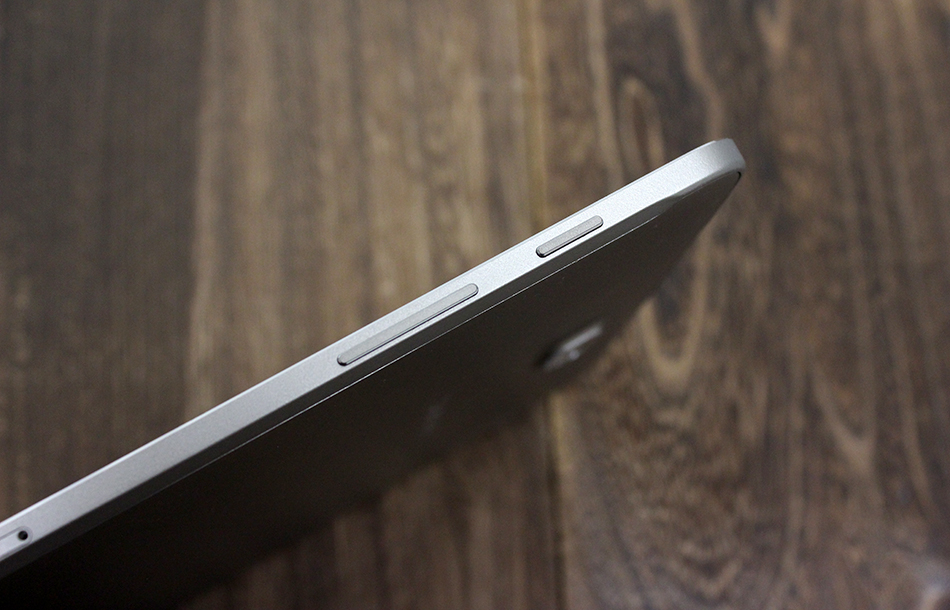 Below the power and volume buttons are the pop-out trays for the nano SIM and microSD cards. The Tab S2 comes with 32GB of internal storage, but those of you who are in the habit of storing your photo and video libraries on your tablet will appreciate the fact that the microSD slot supports up to 128GB of extra storage. 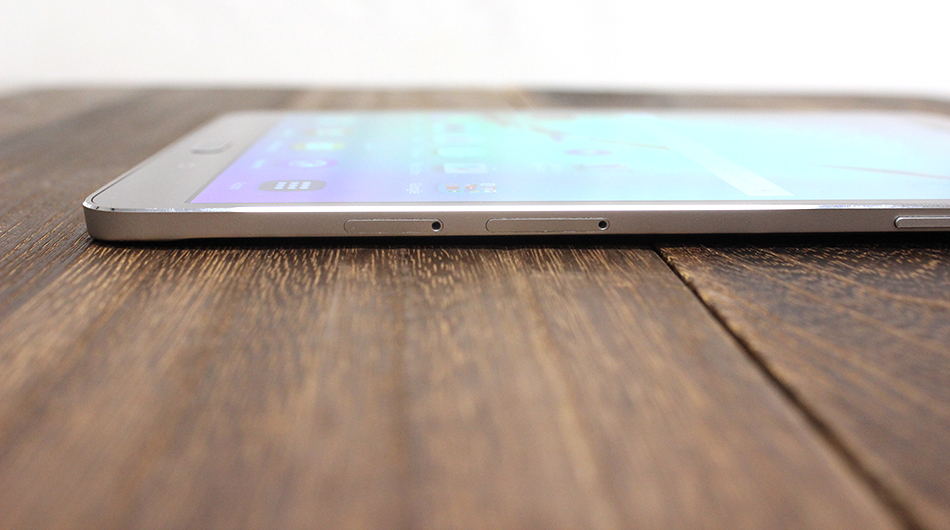 While the back of the tablet is plastic, the frame is metal with shiny chamfered edges. Chamfered edges are a bit dated now, but the metal frame does add a nice premium feel.

The home button uses the same improved fingerprint sensor as the Galaxy S6. That makes it quite accurate, and there's no need for any bothersome swipes. One other thing to note is that Samsung has rearranged the button placement on the the Tab S2 9.7. Compared to the larger 10.5-inch Tab S which had its buttons located in landscape mode, the Tab S2 9.7 defaults to portrait mode instead with the new button placements.

The 3.5mm headphone jack and micro-USB charging port are located at the bottom, along with the tablet’s speakers – all in all a fairly standard setup. 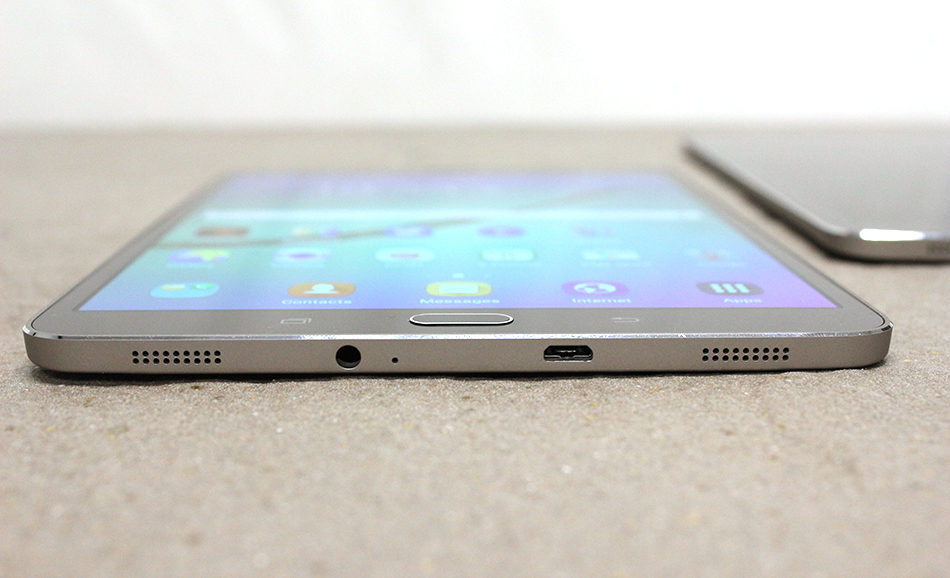 When it comes to the silicon powering the tablet, it’s a bit disappointing to see that it is using the same octa-core Samsung Exynos 5433 processor (four 1.9GHz A57 + four 1.3GHz A53 cores) as 2014’s Galaxy Note 4 smartphone. While it represents an upgrade over the Exynos 5420 (four 1.9GHz A15 + four 1.3GHz A7 cores) used in the older Tab S, the fact that it is reusing innards from the previous year’s phones doesn’t quite befit a flagship device. The processor utilizes ARM’s big.LITTLE core architecture, where the four "big" A57 cores take a backseat to the "LITTLE" A53 cores for less demanding tasks, thus helping to save power. We would have liked to see an upgrade to Samsung's mighty Exynos 7420 chip (found in all of its 2015 flagship smartphones).