Everything you need to know about Wi-Fi 7
Shootouts

The purpose of an Always-On Display (AOD) is to show the most pertinent information such as time, date, day, battery status, missed calls and if you've received any messages - even when your phone is idle and locked. From a functional perspective, this sounds great as you get vital updates at a glance. But doesn't an AOD function mean more battery drain?

According to Samsung, AOD uses less than one percent of battery life per hour, and that 20-odd percent of battery drain per day is supposed to justify the "150 times a day" we fire up our screen just to get micro-updates. Even when you consider that the new Galaxy S7 devices pack a larger battery than the S6 and S6 Edge, we're still conflicted over trading precious battery for something that's as trivial as invoking the screen. Fortunately, AOD can be toggled off if you really want every ounce of battery juice. That said, AOD is the feature that got us hooked on the S7 and S7 Edge. In less than three hours, we grew accustomed to having our time/date/battery life displayed at our convenience – only to be left wondering where these updates went after switching back to our personal smartphones. In a nutshell, AOD is like sweet poison - it drains life away from the phone's battery, but it’s definitely one of the nicer convenience features a smartphone can have. To top if off, the look and feel of the AOD can be customized with several preset templates and options - check out the video above for more details.

We do have one point to nitpick with AOD - it fails to indicate if you've received messages from your popular messaging app(s). At the moment, it seems to only indicate unread SMS messages, but it's unable to tell you if you've received Whatsapp, Line or other chat messages and that can be annoying. Since this is a software feature, we can only hope that Samsung would soon revise the AOD function to indicate unread messages from popular chat apps. 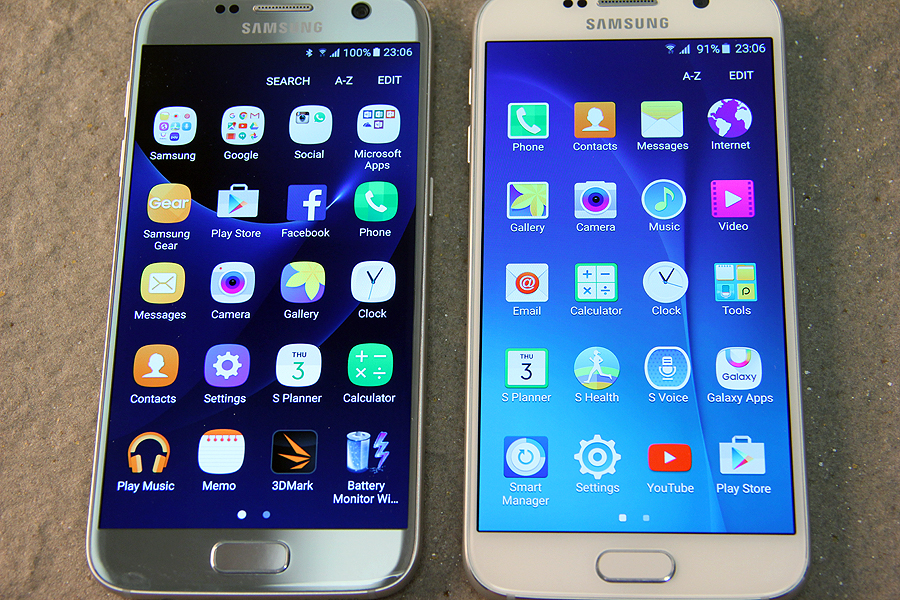 Samsung's familiar TouchWiz interface is the front-end of the Android 6.0 (Marshmallow) OS phone. However, the interface feels much cleaner now. They’ve cut down on the number of apps that populate your screen, save for one Briefing news aggregation tool that's hiding on the left panel of the Home screen. Thankfully, the Briefings feature is easy to disable if you wish to. Most of the Samsung proprietary apps are tucked away in their own Samsung apps folder, making the phone feel less cluttered. Samsung retains the youth-friendly design language of the interface, while using new rounded edges for icons and generous use of gradient-like effects in their bright color palette of choice. This is a welcome change from the older flat and square-ish app icons. With a handful of benchmarking apps installed, the Samsung Galaxy S7 uses 8.27GB out of its available 32GB internal storage (S7 Edge uses 8.57GB out of 32GB with the same apps installed). We find that the amount of free space left is acceptable, given that the Samsung platform went easy on getting pre-installed proprietary apps onto the phones. Space is always subjected to your own usage patterns, but we feel that the remaining capacity is sufficient for us to install a handful of key productivity apps and games. Don’t forget that Microsoft’s Office suite is already pre-loaded for convenience.

We've had questions about the availability of the S7 and S7 Edge's 64GB models popping up on our Facebook page. However, Samsung has yet to announce Singapore's chance of getting the 64GB sets. Apparently, the US market isn't getting the 64GB models. Fortunately, Samsung brought back expandable storage to the S7 and S7 Edge - you can now slot a microSD card in (up to 200GB in capacity) to store all sorts of media. If you don’t need the bonus storage space, you could always opt to have two nano-SIM cards in the hybrid card tray instead – the phones offer both configurations. Either slot supports the 4G network, but only one of them can have an active 4G network connection while the other slot will be relegated to 2G network support.

It's worth noting that the S7 allows you to move apps onto your microSD card (like most Android phones from last year). Larger apps, such as games, can run off the external storage card. It helps you save part of your precious 32GB allotment, too.