The Singapore market gets Galaxy S21 series phones with Samsung’s latest 5nm chipset, the Exynos 2100. The chipset packs an integrated 5G modem, so you’re getting 5G compatibility (both mmWave and sub-6GHz) out of the box. According to Samsung, it has 10% higher overall performance and 20% less power consumption than its 7nm Exynos 990 found in the Galaxy S20 and Note20 series. If you want to dive deeper into Exynos 2100, the article’s here.

We would love to benchmark the Exynos 2100 phones against other handsets with 5nm chipsets, but the only Android-based one that’s out thus far is the Huawei Mate 40 Pro with its 5nm Kirin 9000 processor. Qualcomm already announced the Snapdragon 888 mobile platform, but a 2021 phone with that 5nm chipset has yet to arrive on our shores. That leaves us with the Apple iPhone 12 series since those iOS phones have a 5nm A14 Bionic chipset. We’ll also have to make do with comparing to previous flagships for now. Finally, we’re pitting it against the S20 series to look out for any visible improvements.

Note: the Samsung Galaxy S21 Ultra benchmarked here is the variant with 12GB RAM with 256GB storage. There’s also a variant with 16GB RAM and 512GB storage available for sale in Singapore. Note: The Geekbench 5 benchmark could not run on Huawei Mate 40 Pro, and its score is also unavailable on Geekbench's rankings. Of the three phones, the S21 Ultra and S21+ had no issues with prolonged and demanding benchmarking. However, the regular S21 heats faster after each benchmark test and would give inconsistent results after the device reaches hand-warmer temperatures. If you have a habit of using demanding apps on your phone, like gaming or video recording, you might want to consider at least the Galaxy S21+ for extended, uninterrupted usage.

Additionally, the S21 had slightly lower performance scores than the S21+ and S21 Ultra. We couldn’t exactly pinpoint why that’s the case when the three phones have identical chipsets and processor clock rates. The lower scores are consistent, so we believe the S21 operates as intended despite having similar components to its pricier counterparts. This leads us to believe that the smaller frame of the S21 might probably not have enough surface area for an adequately sized heatsink to maintain the higher sustained performance seen in its larger siblings.

With the Galaxy S21 series using the 5nm architecture Exynos 2100 chipset, the scores beat last-generation 7nm chipsets soundly. They’ve generally scored even better than the Huawei Mate 40 Pro, which has a current-generation 5nm chipset (the Kirin 9000). Compared to previous S series phone debuts, the S21 series and its new Exynos 2100 chipset have a strong showing in performance increments and is a welcome change.

What’s left to observe are the benchmark scores of the competing Qualcomm Snapdragon 888, which reported even higher numbers via Qualcomm’s testing. We can say that the Exynos 2100 chipset seems promising with flagship-tier performance. Whether it’s competitive enough next to its rivals, remain to be seen as more 2021 flagships pop up over this year. 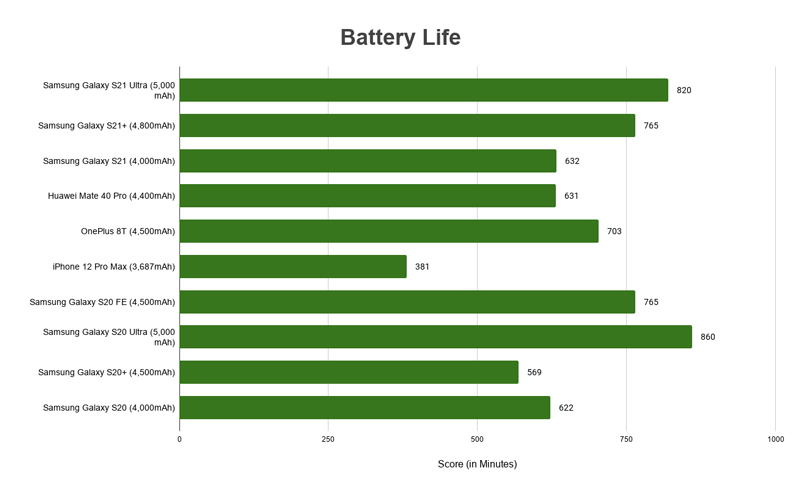 The Galaxy S21 and Galaxy S21 Ultra had the same battery capacity as its predecessor (4,000mAh and 5,000mAh respectively) while the Galaxy S21+ saw an increase of 300mAh (to its new 4,800mAh total). Samsung managed to keep the S21 series’ battery uptime similar to its predecessors despite the leaps in performance.

The phones’ 25W wired fast charging capability was snappy too. The Galaxy S21 took 70 minutes, Galaxy S21+ took 74 minutes, and the Galaxy S21 Ultra took 60 minutes to go from 0% to 100% with a compatible, third-party fast-charging adapter. It’s a pity Samsung has decided to leave out a charging brick in the phone’s packaging, especially when the phones already come at a premium price.

The phones are also capable of 15W wireless charging, and it works seamlessly. The constraints of time and not having a Samsung-provided wireless charger meant that we’d not had the opportunity to clock its wireless charging speeds at the time of publishing. At a glance, Samsung has made one of its better Galaxy S launches in recent years with the Samsung Galaxy S21 series. They put the phones out early, yet managed to deliver a powerful and beautiful trio. Each device - be it the regular, plus, or Ultra variant - were stylish in their ways, and cater very well towards everyday use.

Sure, the counter-argument here could be that Samsung didn't do very much outside of video-recording features to make S20 buyers pull the trigger on an S21 unit. But if we compared the S21 phones to older Samsung flagships, or even other Android flagships from last year, it's a compelling buy. A strong Exynos performance spells well for a market that's conscious about getting their money's worth, and the stunning imaging quality along with its robust imaging suite of features dispel any doubts about the Galaxy S21 series doing well in our little island. If we look at each handset as individuals, the strongest draw would be the Galaxy S21 Ultra. It's not just the ease of use during photography, or the massive battery capacity, or the delicious 1440p display. The Galaxy S21 Ultra's S Pen support gives casual Galaxy Note users a reason to consider switching over to the Galaxy S series instead - more so if it's an ageing Note on hand. With a starting price of S$1,798 for 256GB and pre-order bonuses worth S$350++, it's irresistible next to the S20 Ultra (which launched with a higher sticker price for less storage).

Rounding off the phone's overall polish are other Ultra-only niceties, like 4k60fps recording on all rear lenses and 12-bit RAW photo option, truly exalting the 'pro-grade cameras' marketing spiel peddled by Samsung. While the Galaxy S21 seems like the financially savvy alternative out of the three at S$1,248 for 256GB, it also had lower performance despite having the same components. If you don't need HDR10, you could consider the Samsung Galaxy S20 FE instead, with similar-enough performance scores, equally1080p-quality panel, more battery life, and a compelling S$1,168 launch price for 256GB storage (or even the 128GB edition for just S$1,068). The Fan Edition alternative also comes in a wider selection of colourways, so you're not exactly losing out on funky appearances, either. If a new Galaxy S21 series device is what you need, and you don't want to fiddle around with an S Pen, then there's the Galaxy S21+ that goes at a palatable S$1,498 for 256GB, simply because it's just 0.1-inch smaller than the curved S21 Ultra's display. It has better battery uptime than the regular version, stunning performance that matches or betters the S21 Ultra, and it still comes in Phantom Violet if you don't like boring monotones.

While it sounds like a lot of praise for the current batch of Galaxy S phones by Samsung, we're also not blind to the missteps that came with the Galaxy S21 series. If you ask us, the Koreans should've kept microSD compatibility instead of removing it, and bring back 1440p on to the S21 and S21+ for the people who actually know how to use them. The real shame is the removal of a charging adapter. Indeed, Samsung could've found it in them to at least give a universal fast-charging adapter, considering the sticker prices of these premium devices.

Trespasses aside, it's clear that Samsung managed to distil what was already excellent in their Galaxy S series, and started 2021 on the right foot.

You can learn more about the availability, where to purchase and pre-order details of the Samsung Galaxy S21 series here.