Put the life in lifestyle with the new Samsung Galaxy Note10

Put the life in lifestyle with the new Samsung Galaxy Note10 We know a lot of things don’t grow on trees.

But if you’re looking for a device that you can just as easily take on a date as you can burn rubber on Asphalt 9: Legends, then Samsung’s newest smartphone is ripe for the picking.

At a media event Samsung hosted last week, we were introduced to the Korean tech giant’s latest toys: The Tab S6, the Active2 Watch and the aforementioned Galaxy Note10/10+.

Don’t get us wrong; they’re all pretty cool, but if you’re looking for the real standout, it’s definitely the latest iteration of Samsung’s flagship series (oh and the Galaxy Book S, but we don't know when and if it will come to Singapore). 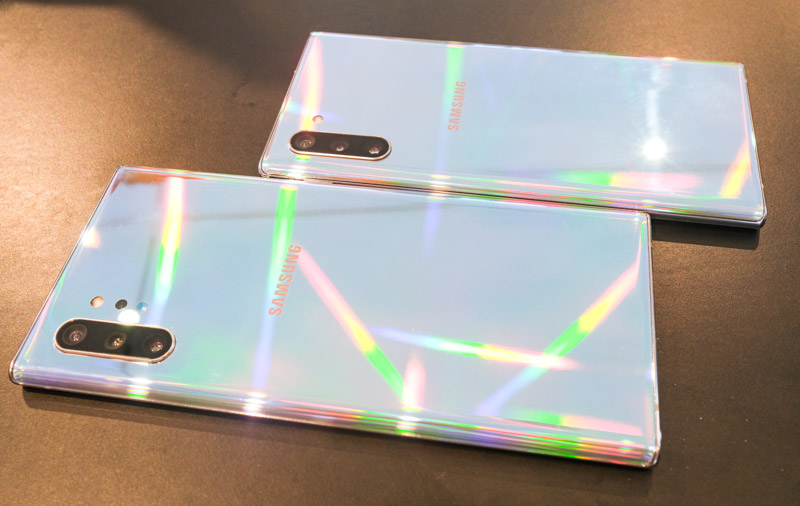 As people often say, “beauty is in the eye of the beholder” – but that’s no reason not to look good too. Fortunately, both the stylishly sleek Note10 and its larger variant the Note10+ do well on that front, and they're reasonably light to boot. In fact, both models are lighter than the predecessor and it's slim, without any of the shady - go figure.

Peeking under the cover, the Note10 duo sport 8 or 12 gigabytes of RAM depending on the model, powerful 7nm Exynos processor, super-fast wireless charging batteries (and even speedier wired charging up to 45W on the Note10+) and edge-to-edge cinematic Infinity-O displays - a winning combination for just about every lifestyle purpose you can think of.

On paper, that is. Ever sceptical, I decided to check out several high-intensity videos on YouTube to see if the Note10 could put its money where its charging port was.

Suffice to say that I only had praise for the immersive, bezel-less Infinity-O display by the end. The videos I checked out weren't just rendered nicely - it's like they were being played in a theatre (well it wouldn't be a stretch if you hold it close to you and enjoy audio through wireless headphones). On that note, pardon my inner Marvel fan for appearing here, but watching Avengers: Endgame's final fight on the Note10 just made an amazing scene even more so.

Okay, so it does pretty well with videos. What about games, then? Surely that powerful Exynos core isn't a one-trick pony?

The demo sets came pre-loaded with the especially demanding Asphalt 9: Legends, which made for an effective pseudo-benchmark test. Don't get me wrong. I expected it to lag every now and then, especially on such a hefty title. But in a nutshell, I was pleasantly surprised.

From my experience on other phones, the frame rate tends to drop significantly when the cars engage their boost functions. That said, if the Note10 did actually slow down while I was zooming through the neon-lit streets, it did a flawless job of hiding it. Moving on to photography, we had a go with the Note10’s editing tools too. And for someone who’s usually not keen on "capturing the moment" and all that, I found myself really enjoying the plethora of filters and effects that the smartphone offered.

I have to say, my favourite was probably the AR Doodle feature. It's pretty neat; allowing users to make sketches, outlines and what-have-you in augmented reality. Here's a quick video showing the outcome of our AR doodling video showing rain drops and 3D lightning streaks:-

Curious to know how we did it? Here's how it was done:-

Also, have you ever seen pictures where the photographer snaps a shot of a vibrant plate of food, only to have the composition diluted because the background is equally colourful? I know I have, and I'm happy for future owners of the Galaxy Note10 that they won't have to deal with that problem - be it for photos or videos.

Don't want random bystanders ruining your shot? Simply engage the background blur function in Live Focus photo mode (or the Live Focus Video mode). Looking to accentuate colours in the foreground? Toss the background into grayscale with the Colour Point function and snap away like so:-

There are many others at your fingertips, but honestly, it’s as Samsung described it; the Note 10 is about putting a pro-level studio into the average consumer’s hands without having to fiddle with any third-party apps. At this point, all I can say is that the Note10 has made a pretty good first impression on me, lifestyle-wise. Great display, extensive photography kit, you name it. Here's a video summary from my colleauge of all the other key specs, productivity features and more you might want to check out:-

We're still putting the review units through their paces, but if you're keen on asking the nitty-gritty, second-date questions, these articles below might just be what you're looking for!

Read more (2): Check out what made DxOMark put the Note10's camera at the top!

Read Next (3): A deep-dive experience with the Galaxy Note10 series

Read Next (4): Is it worth it with a telco contract plan? We do the math for you!